Call it “backseat driving” or “armchair experts,” but doesn’t it seem that the best parents are the ones without children? These parents have all the answers and have a flawless plan all laid out for what it’ll be like when children are in their world – I know because I was one of them. Like many well-intentioned parents, my partner and I thought we had a solid parenting plan and had discussed our big dos and don’ts. But like most plans that are made before actually parenting, ours went horribly, comically wrong.

I now have an almost 2-year-old daughter and a 5-month-old son. Most of the things my husband and I set out to flawlessly execute with our kids were attempted with my daughter. By the time my son came, we were wise enough to realize that the “whatever works, works” plan was probably the way to go.

“Keep your expectations low and you’ll never be disappointed,” my dad always said. This philosophy serves us well now, but it fell on deaf ears in the beginning.

I used to think doing these three things as failures on my part, because I swore I’d never do them. How could I have done such a bad job? How did I let this happen? Now I realize that if you measure parenting your children in terms of successes vs. failures, the biggest loser ends up being you.

Every parent has something they’re struggling with and something their kids do that was never intended to be part of their lives. The worst thing about making these “our kids will never” statements is that they come on the coattails of judging other moms and what they’re doing with their kids. We rationalize our own quirks by telling ourselves “at least my kid doesn’t do that.”  But, we’re all doing the best we can for ourselves and our families.

Yep, this was us. Fast forward to one week after my daughter was born – she wouldn’t stop screaming. We put a paci in her mouth, she took her tiny finger, wrapped it around the handle, pulled it out, and screamed louder. We were scared.

A few hours later, we calmed her down after trying a million things (short of handstands in the living room) and then she finally took a pacifier. The pacifier became essential to helping her focus on getting sleepy during our naptime and bedtime routines. Around four months, she stopped taking a pacifier, and I was super worried. How will she soothe herself? What will keep her quiet now? (Irony is fun, right?) But, she never really needed a replacement to soothe herself, and I know that’s fairly unique.

When my son was born, we (read: I) went straight for the pacifier. My husband and father teased me for pushing the pacifier on him, but I knew better now – if it works, I’d take all the paci assistance I could get. There is no shame in the paci game. 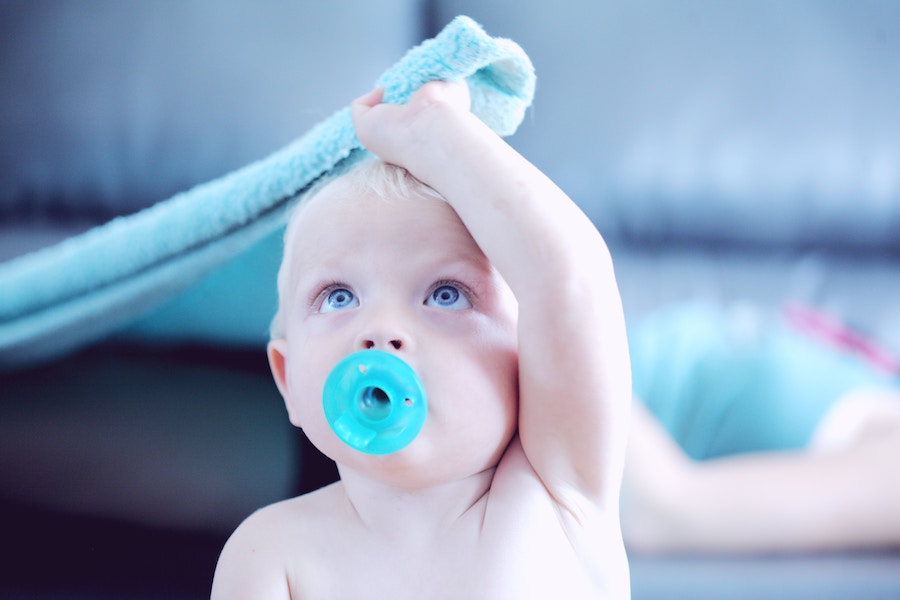 2. “We will never let our kids sleep in our bed”

10 months after my daughter was born, my husband was on week 30 of 50 weeks of overnight or out of town work. I was pregnant with my son and having a very sick first trimester while also working overtime at work. My daughter chose this particular time to stop sleeping through the night and start screaming for hours instead (babies, amiright?). I was alone, exhausted, and feeling completely defeated.

Enter co-sleeping. I now know there are different tactics for getting babies back to sleep, but at the time the only one I could think of that would allow me some sleep was co-sleeping. As soon as I brought my daughter into my bed, she would pass out. My husband was also gone every night, so there was plenty of room.

I felt like a total failure. On the weekends we would let her self-soothe and things eventually (like, three months later) got better.

Now, the only time she sleeps in bed with me is when she’s sick. The funny thing is, sometimes, I miss cuddling her at night. There’s no right way to do any of this. You have to just do what feels right to you at the time.

3. “Our child will be so great at the dinner table”

I actually laughed out loud just typing this one.

We did everything “right” with table training our daughter. She would sit in her highchair and socialize at meals both at home and in public. We were so proud of her and our accomplishment. Of course, around 16 months of age, she starting flipping out when we tried to put her in her high chair. We still were determined to have her sit and eat so we bought her a little table and chairs from Ikea and put it next to ours.

This is when things spiraled out of our control.

Occasionally, she will sit for an extended period of time, especially if someone joins her at her little table. But after we gave her the taste of freedom, she’s never looked back. She does laps around our kitchen and dining room during meals. Our next attempt was a booster seat, and surprise, that didn’t work, either.

Now we have three chairs (a high chair, her own bistro seat, and a booster seat) for her, and she mostly eats standing up. Some days, we even have living room picnics (hey, something has to break up this miserable winter).

The other day, she ate her PB&J sitting in an empty laundry basket in the living room watching Tarzan. In that time, I was able to feed her brother and wash some dishes — good enough for me.

Ultimately, you can’t beat yourself up for things that don’t reflect the kind of parent you think you are or had set out to be. Before we make blanket statements about other parents’ situations and choices, let’s try to think twice.

My best friend said the other day, “We do EVERYTHING we said we would never do.” We learn from life as it happens, and before you’re actually in it, you have no idea what it’s like or what your kids will be like.

This chaos used to really stress me out, and honestly, some days I still get annoyed. But after my son was born and needed much more attention than my daughter did at that age, I just gave in to the less than perfect image we are living.

I try not let filtered instagram images fool me into thinking everyone isn’t struggling with something. My house is not super clean and definitely looks like children live here, but I’m OK with it. Did I ever think it would be like this? Maybe not. But this is reality.

Yes, my curtains have food on them, but they won’t always — and I know I’ll miss it one day.