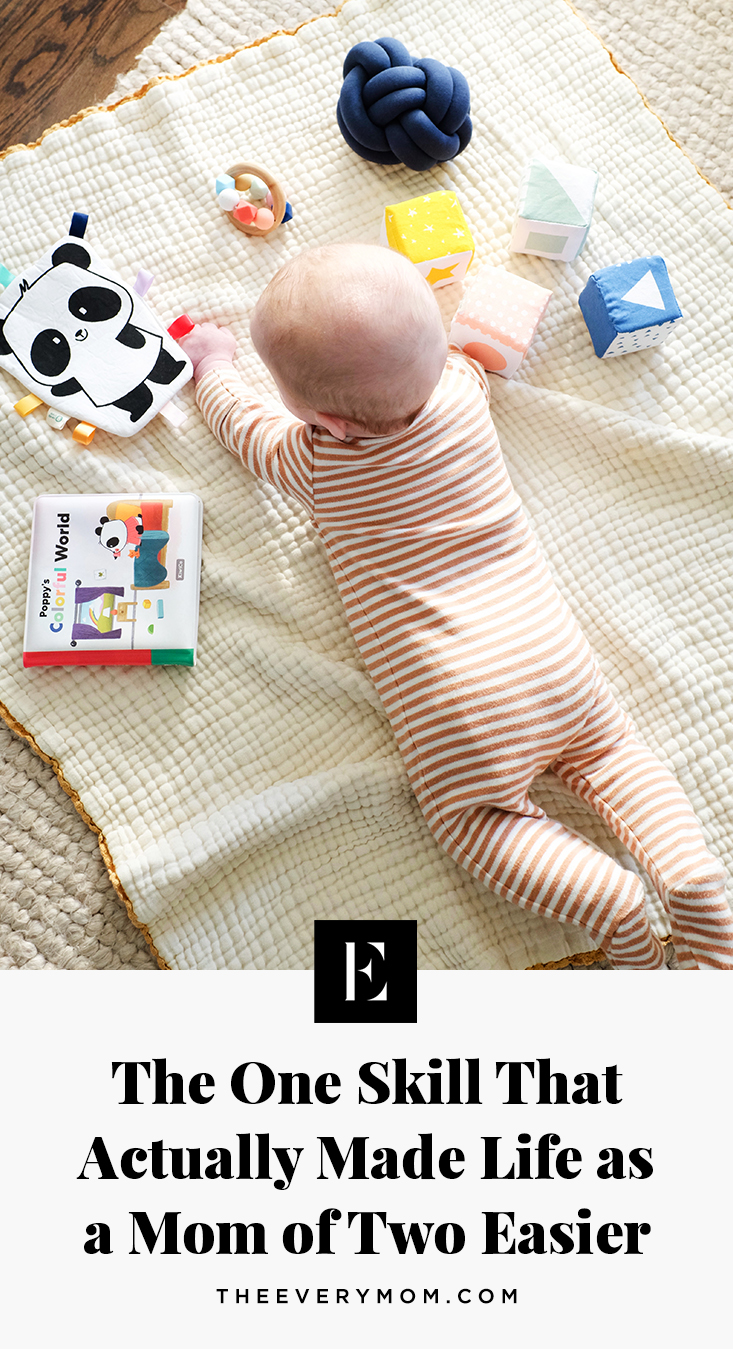 Independent play is a phrase that carries a lot of weight among parents of young children.

It was advice I received from seasoned moms, and now it is advice I’d give to any new or expecting parent: encourage independent play frequently and with great vigor. (No, I am not suggesting you ignore your child and sit on your phone. Obviously.)

But establishing the expectation for your child that they sometimes have to entertain themselves because mom or dad (or any other caregiver) is busy with something has proven valuable from the get-go. And it’s become even more crucial with two little kids.

Establishing the expectation for your child that they sometimes have to entertain themselves because mom or dad (or any other caregiver) is busy with something has proven valuable from the get-go. And it’s become even more crucial with two little kids.

For the past seven months, I’ve had two baby boys under the age of two–two under two as it’s affectionately dubbed–and the little one, Charlie, was borderline colicky for a few months. Yes, it’s as exhausting a time as anyone would assume it to be: unreliable sleep schedules, boundless toddler energy, occasional tantrums, fussy newborn cries with no known cause, diaper rashes, blowouts, spit-ups, around-the-clock feeding, and diaper changes. You truly wonder how a parent ever gets anything done! 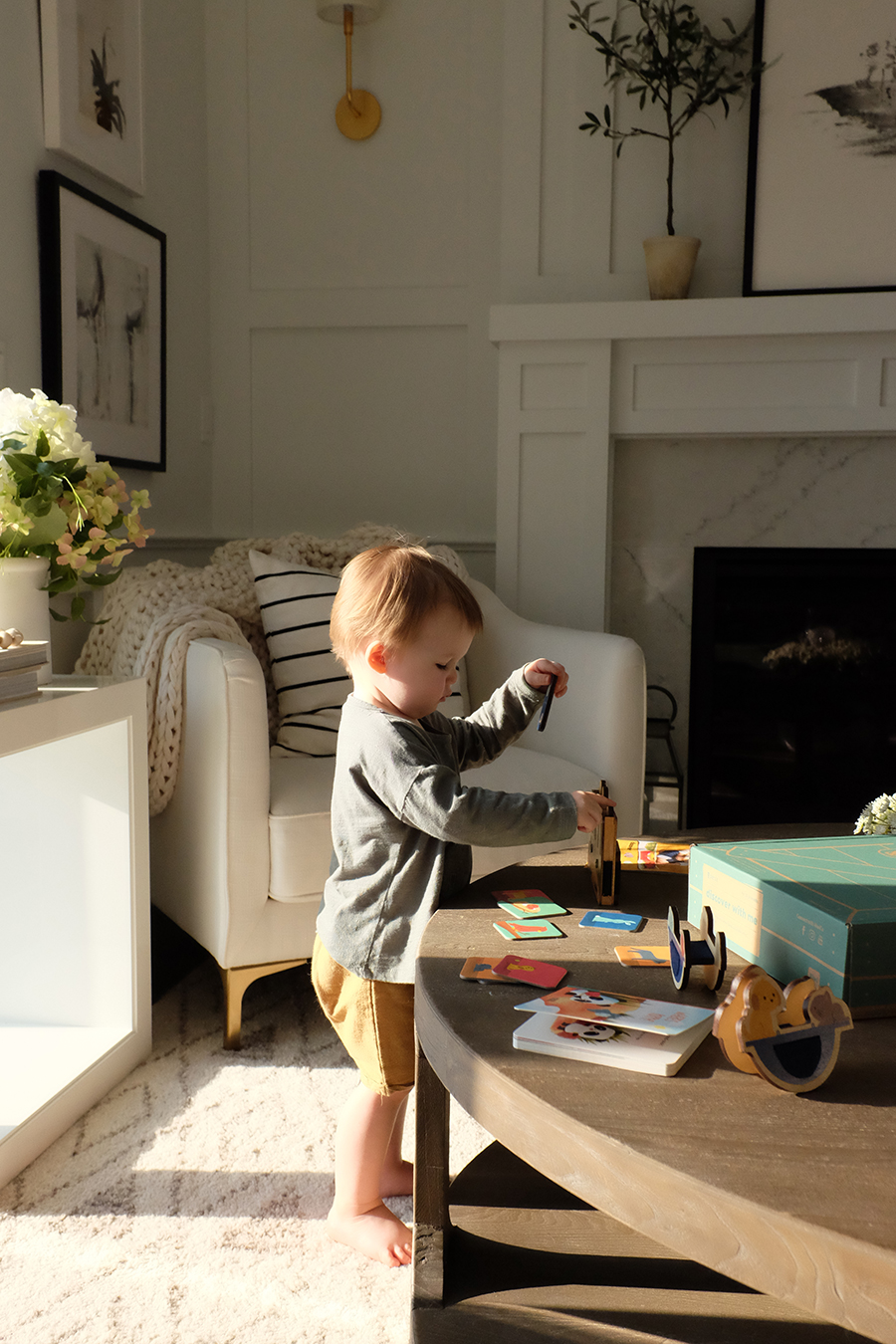 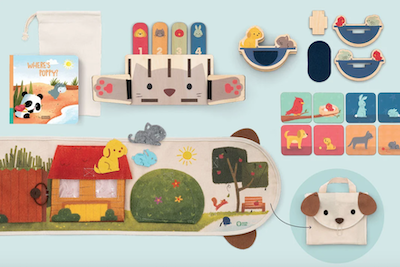 Discover With Me Panda Crate (For toddlers, 19-24 months old)

But we did it. Our oldest will be two in a week, and I can’t believe it. And we not only survived, I’d honestly say in some ways, we thrived—more so than I expected to at least!

The short answer as to how we did it was to establish good sleeping habits, lean into nap times and early bedtimes, and encourage independent play. Those three things have made all the difference in our lives this past year. They each contribute greatly toward having happier kids and happier (more rested, less stressed) parents.

If we had not taught our older son, Henry, to play independently from a young age, I have no doubt these last seven months would have been much more difficult. Don’t get me wrong, our toddler still wants our attention and for us to play with him more often than not, but the windows of time when he sits and focuses on a task by himself are gold when it comes to parenting currency. Sometimes it’s five minutes. Sometimes it can go as long as 45 minutes.

Our toddler still wants our attention and for us to play with him more often than not, but the windows of time when he sits and focuses on a task by himself are gold when it comes to parenting currency.

But no matter how long the independent play period lasts, you better believe I’m checking something off my to-do list when it happens. Whether it’s loading the dishwasher, answering emails, doing laundry, taking a shower–whatever I need to get done–it’s much easier if I’m not holding a newborn and a toddler. 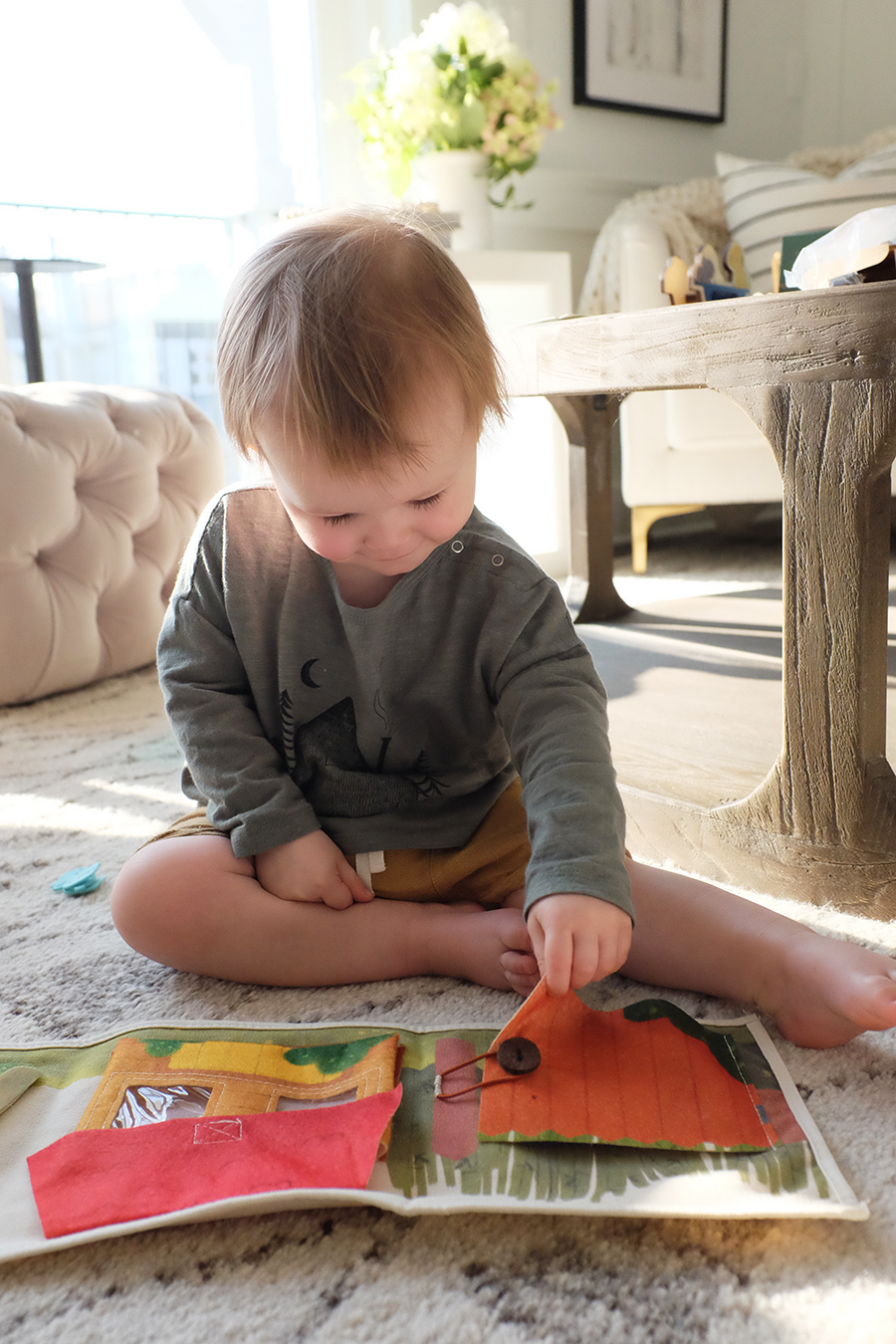 Not to mention, we quite literally needed Henry to be able to play by himself so we could feed Charlie. Newborns eat every few hours, and it can take up to twenty minutes. It’s a wee bit difficult to entertain an 18-month-old while you’re using both hands to feed the little babe. But I’d set Henry up with one of his toys that I knew he’d focus on, and I could feed Charlie no problem.

So, how do you encourage independent play, you wonder? I am happy to say it’s much easier than you think.

So, how do you encourage independent play, you wonder? I am happy to say it’s much easier than you think.

The biggest piece of advice I’d offer is to invest in the right toys. Toys that nurture key developmental milestones for any given age. Toys that encourage interaction, manipulation, and creativity. Toys that you can lay out for your child and leave them to engage with as they see fit.

If you’re wondering, Where do I find such toys? How do I know if they’re age appropriate? And what the heck can my 4-month-old possibly do independently?, you’re asking all the right questions.

How Does a Baby Play Independently?

Thanks to companies who develop products that serve this exact purpose, this is much less complicated than it seems. We’ve come to rely heavily on the Panda Crate bi-monthly toy subscriptions. Made by KiwiCo, Panda Crate was developed especially for infants and toddlers, grounded in the science of early childhood with the intent to make life easier on parents. The kits not only come with age-specific toys that nurture developmental milestones and creative play, but they include cards that detail each product and different ways to demonstrate play for your child and what skills the various toys help your little one hone. 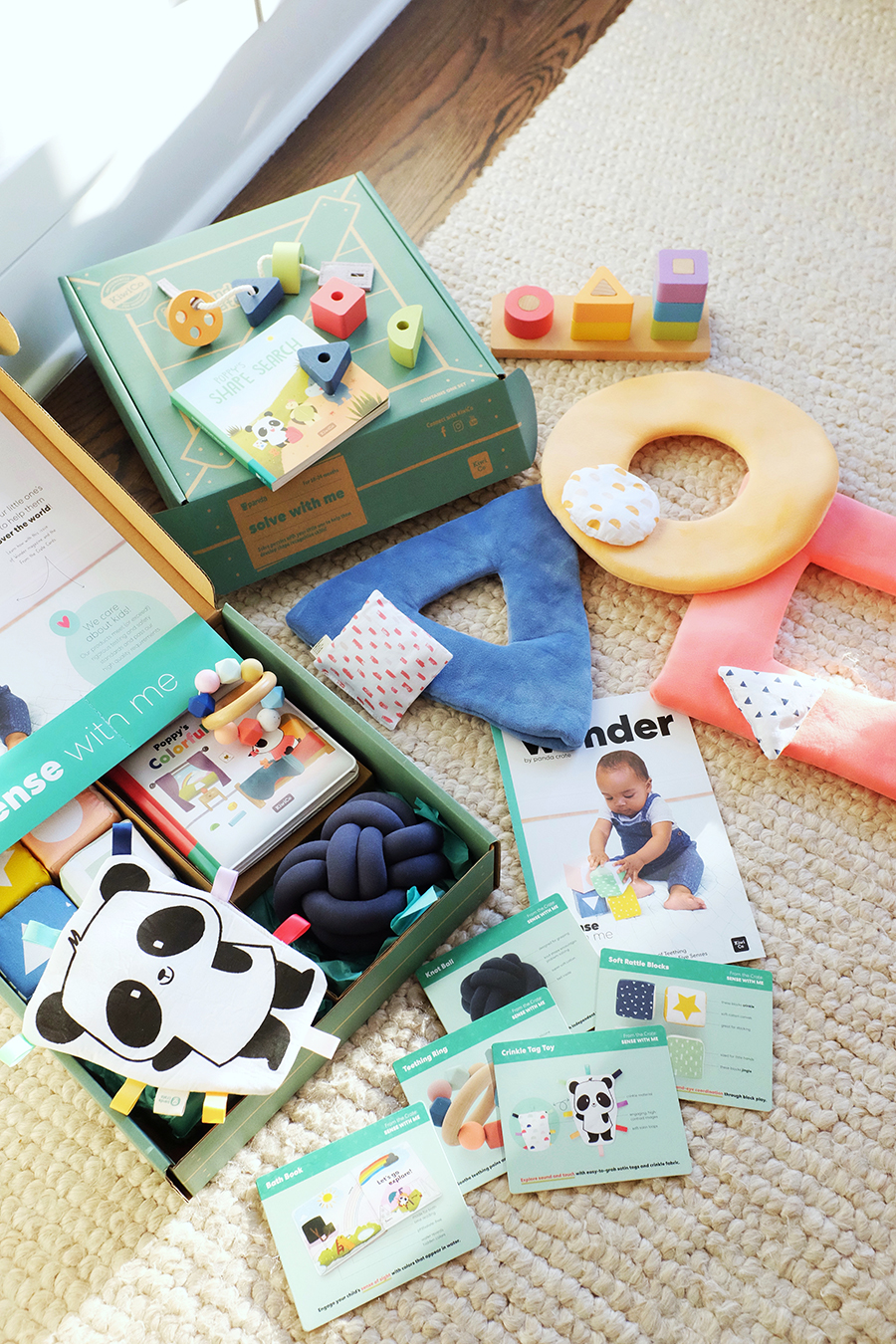 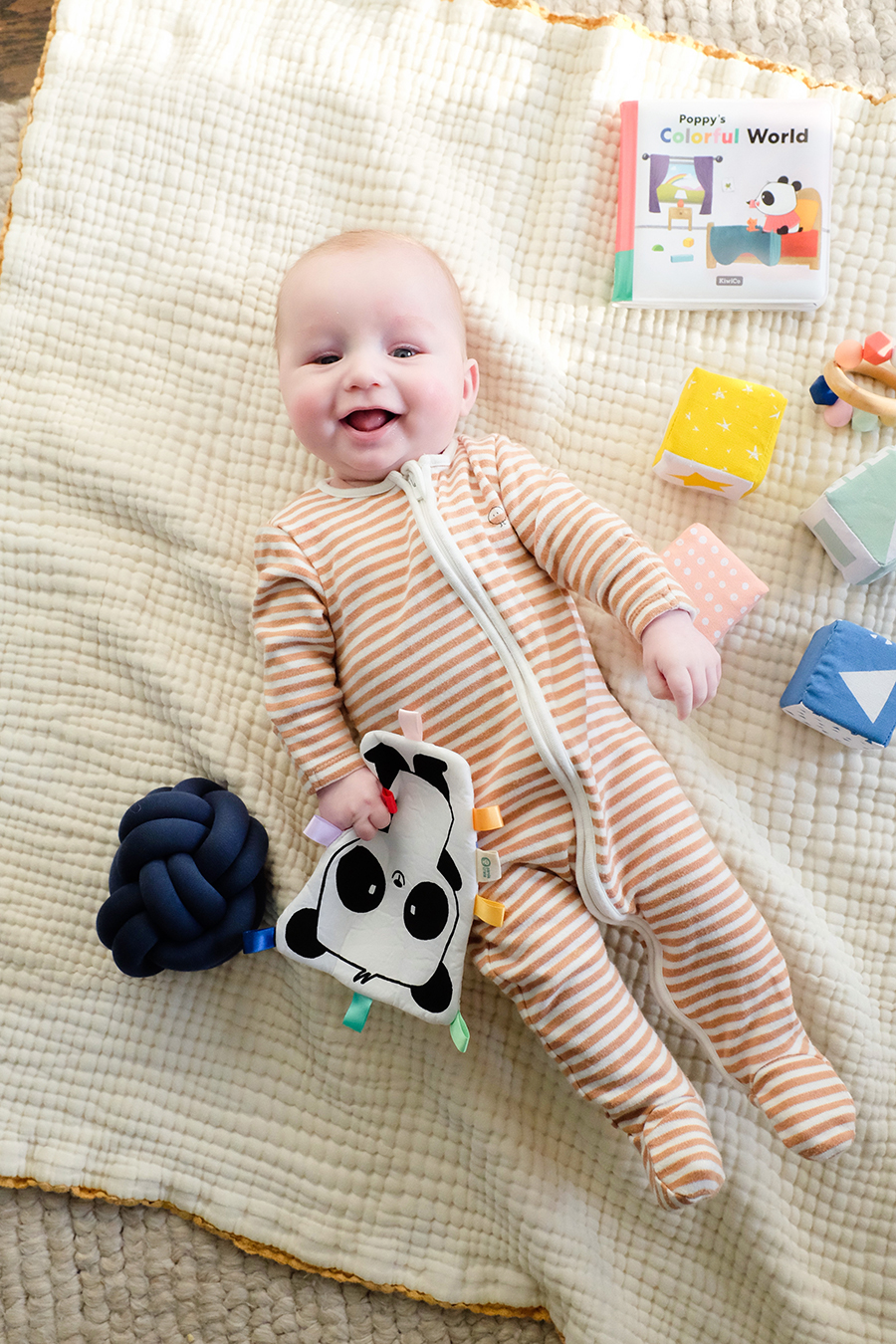 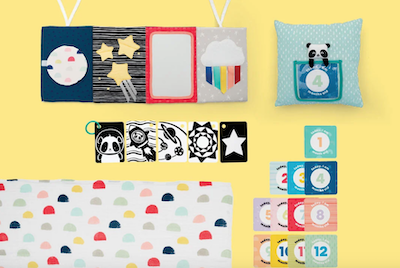 Bond With Me Panda Crate (For newborns, 0-2 months old) 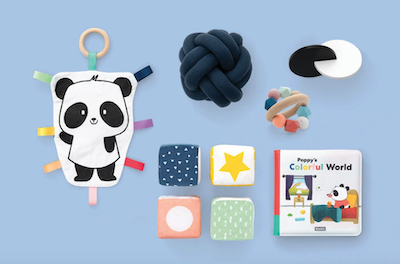 Sense With Me Panda Crate (For babies, 3-6 months old) 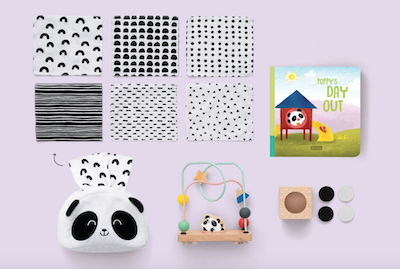 Explore With Me Panda Crate (For babies, 7-12 months old)

For example, this set of four soft blocks was included in one of Charlie’s infant kits. My first thought was “How does a baby that can’t do much of anything play with blocks?” Well, fortunately, the supplemental info card that comes with it details exactly how to use the blocks to engage your baby and what skills they are learning by playing with them. Pause for shock, they’re now easily one of Charlie’s favorite toys. And he has no idea how to stack them (which was what I assumed was the only possible thing to do with a block). It’s amazing.

When a new Panda Crate box arrives, my husband and I go through each of the items and read the cards to get ideas of how to set the boys up for success. Sometimes we’ll demonstrate an activity, set it up for them, or help illustrate how to play with an item if they are unsure. But often the beauty is letting them figure it out for themselves. 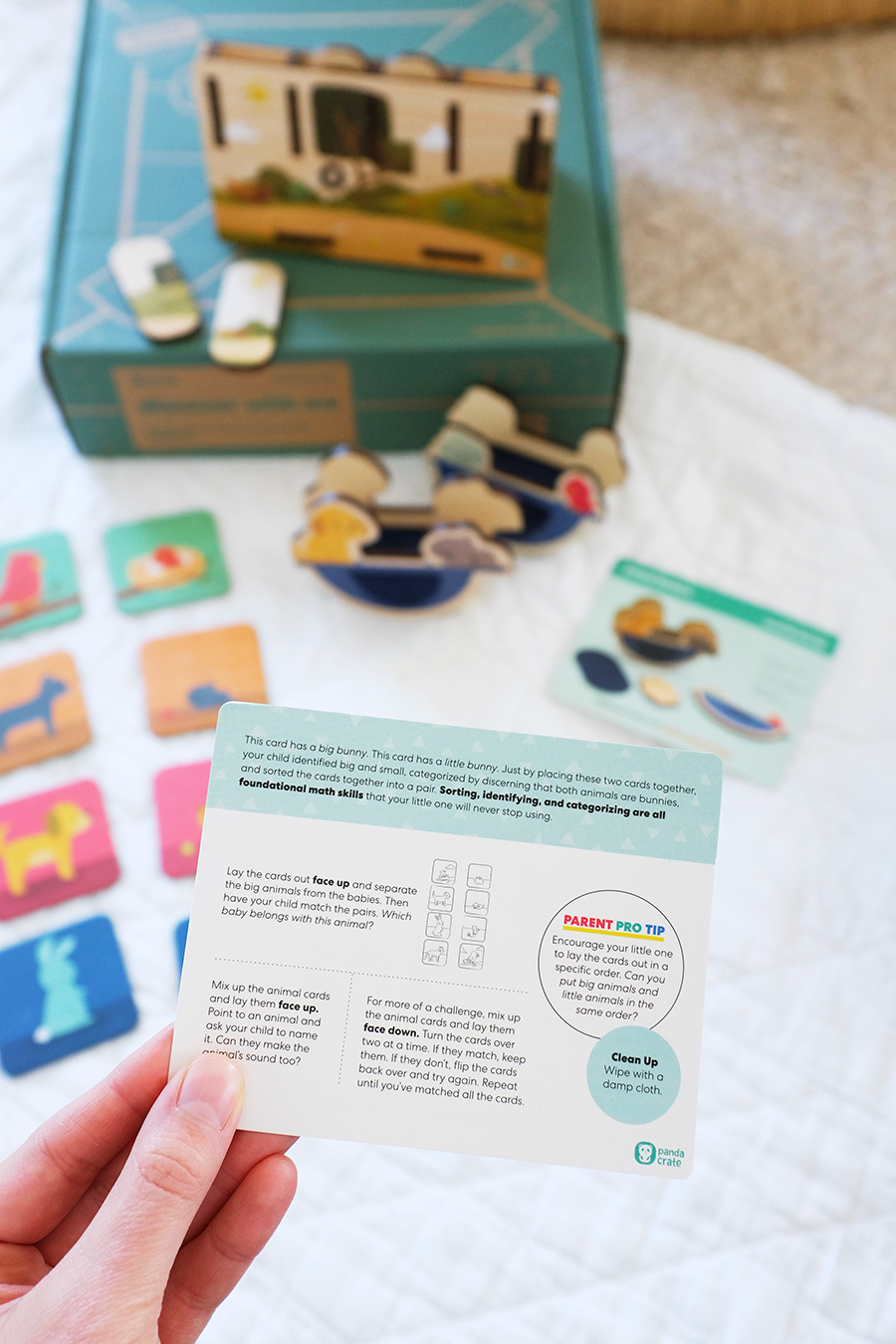 A lot of the items in the Panda Crates are Montessori-based and encourage thoughtful manipulation and exploration. Some items have a clear beginning and end goal, much like a puzzle does, while others have no clear direction and are very open-ended—these can be played with however the child decides.

Our older son, Henry has definitely shown frustration at times if he is not sure what to do with an item, but I’ll often talk him through it or encourage him with words while I’m doing something else. And there are other times where he’ll find five different ways to play with a single toy all on his own and has a blast doing it. It’s amazing to watch his busy little brain so focused on something. 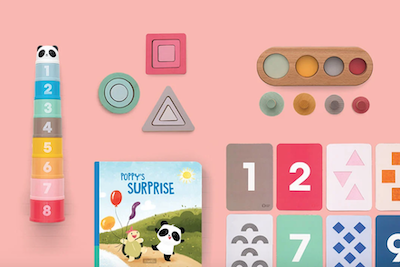 Count With Me Panda Crate (For toddlers, 13-18 months old)

Discover With Me Panda Crate (For toddlers, 19-24 months old)

The same goes for our baby Charlie. If I had to describe Charlie’s first few months of life, it would be “don’t even think about putting me down, Mom, k thanks.” The boy loves being held, which is so sweet, of course, but also I truly cannot do anything else or even give our toddler one-on-one attention if I’m always holding the baby. We’ve had to really make an effort getting Charlie used to being set down and not always entertained with peek-a-boo or singing, but instead to be comfortable being by himself and keeping himself busy.

The Panda Crate toys are so amazing at keeping him focused and happy on his own. And they serve exactly what milestone he is going through at that time and the cards detail all of it. I can hand him one of the toys while he’s in his bouncer or set him up with a few at arm’s reach for tummy time, and I’m not lying when I say he has easily gone up to 20 minutes just grasping and mouthing and reaching for the age-appropriate toys that come in the kits.

How to Set Up Independent Play

If your child is younger and doesn’t grasp what you’re saying, like Charlie, it’s enough to simply set them in for “circle time.” Whether they are doing tummy time or can sit or crawl, you clear a safe area for them to be by themselves, like on a soft playmat, and display a few toys around them. (Some parents will even do this in their crib or a pack-n-play to ensure they’re safe.) 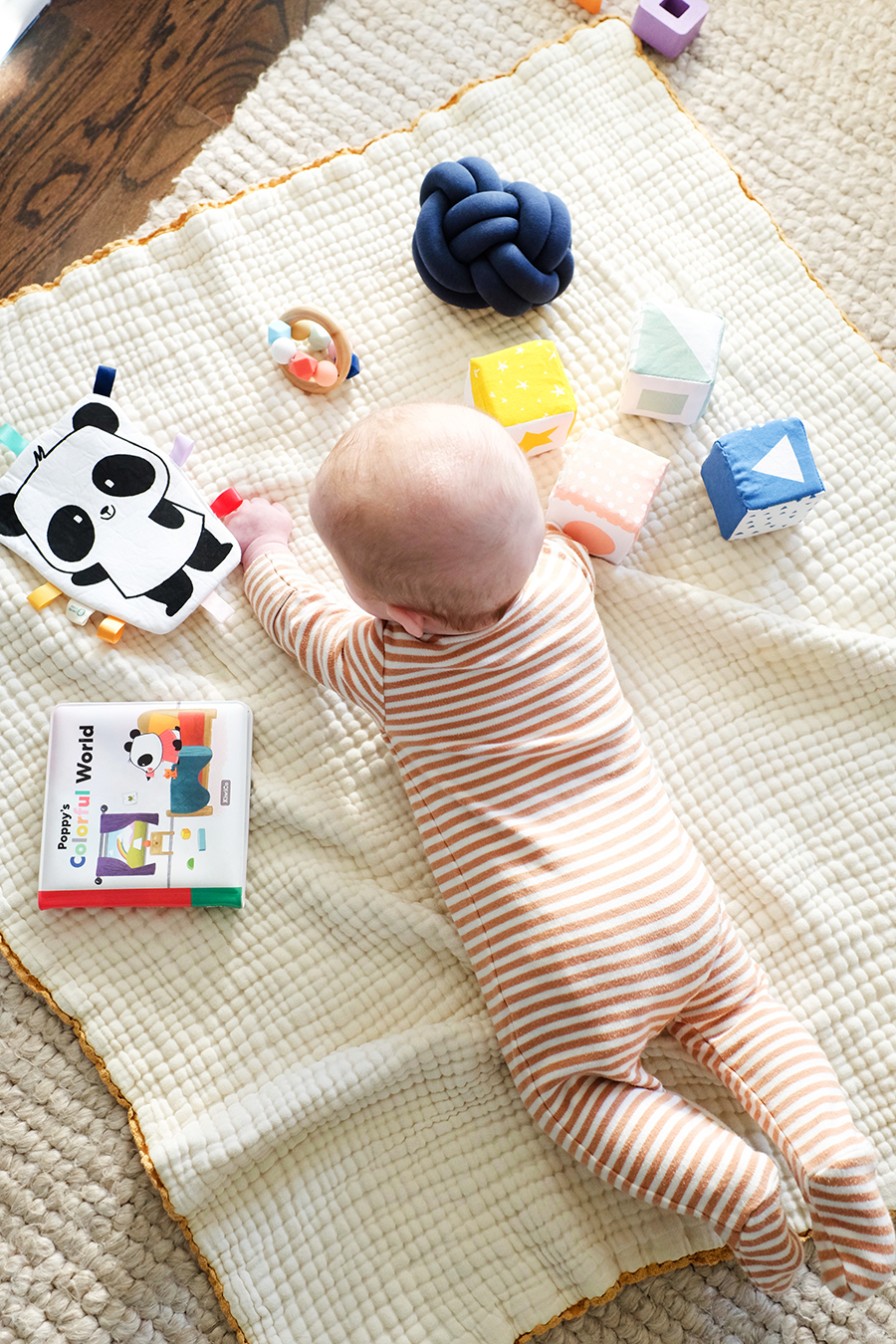 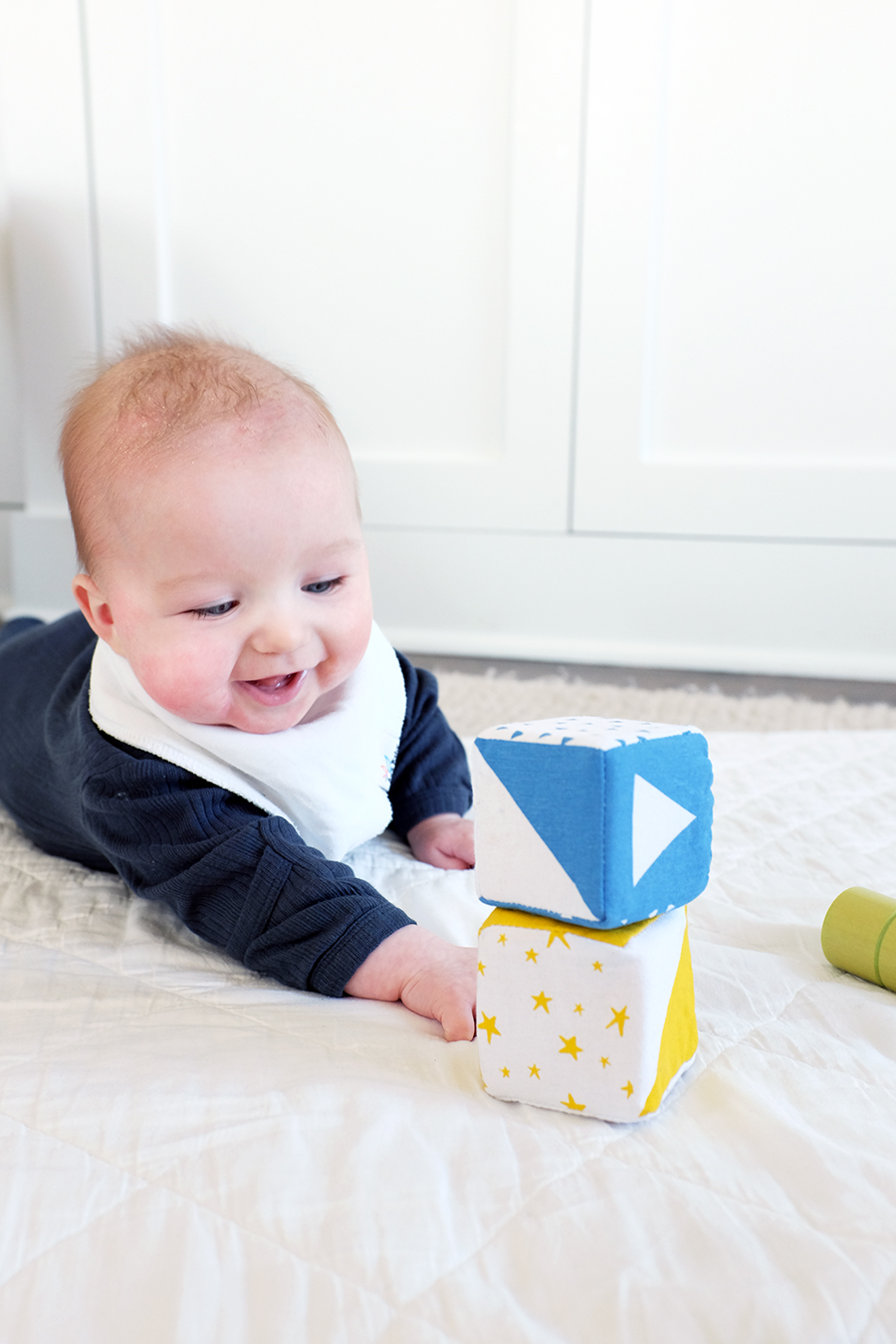 If your child is a bit older and understands what you are saying to them like our almost-2-year-old does, I recommend simply explaining to them that it’s time to play quietly with whatever toy or toys you set up for them while you get something else done. Do not apologize—you’re not doing anything wrong that warrants an apology.

If your child is a bit older and understands what you are saying to them like our almost-2-year-old does, I recommend simply explaining to them that it’s time to play quietly with whatever toy or toys you set up for them while you get something else done.

If I’m trying to cook dinner or get some work done, Henry will sometimes cling to my leg and cry, asking me to play with him or pick him up, but I calmly state “Mommy’s hands are busy and I can’t pick you up when my hands are busy with something else. Why don’t you go build your tower or try to toss the bean bags in the shapes.” It might take saying it 2-3 times, but eventually, he understands and goes off to do said activity. 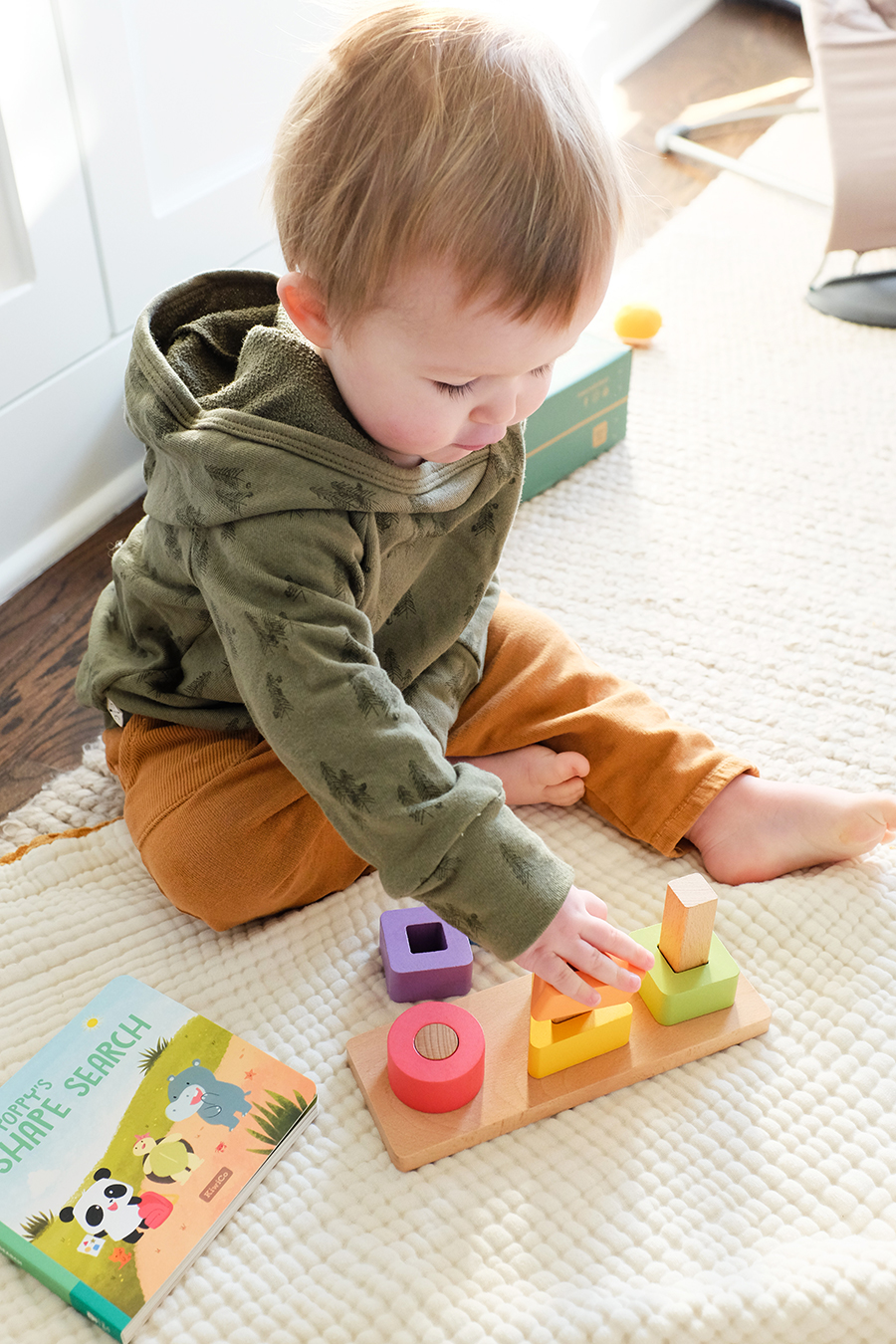 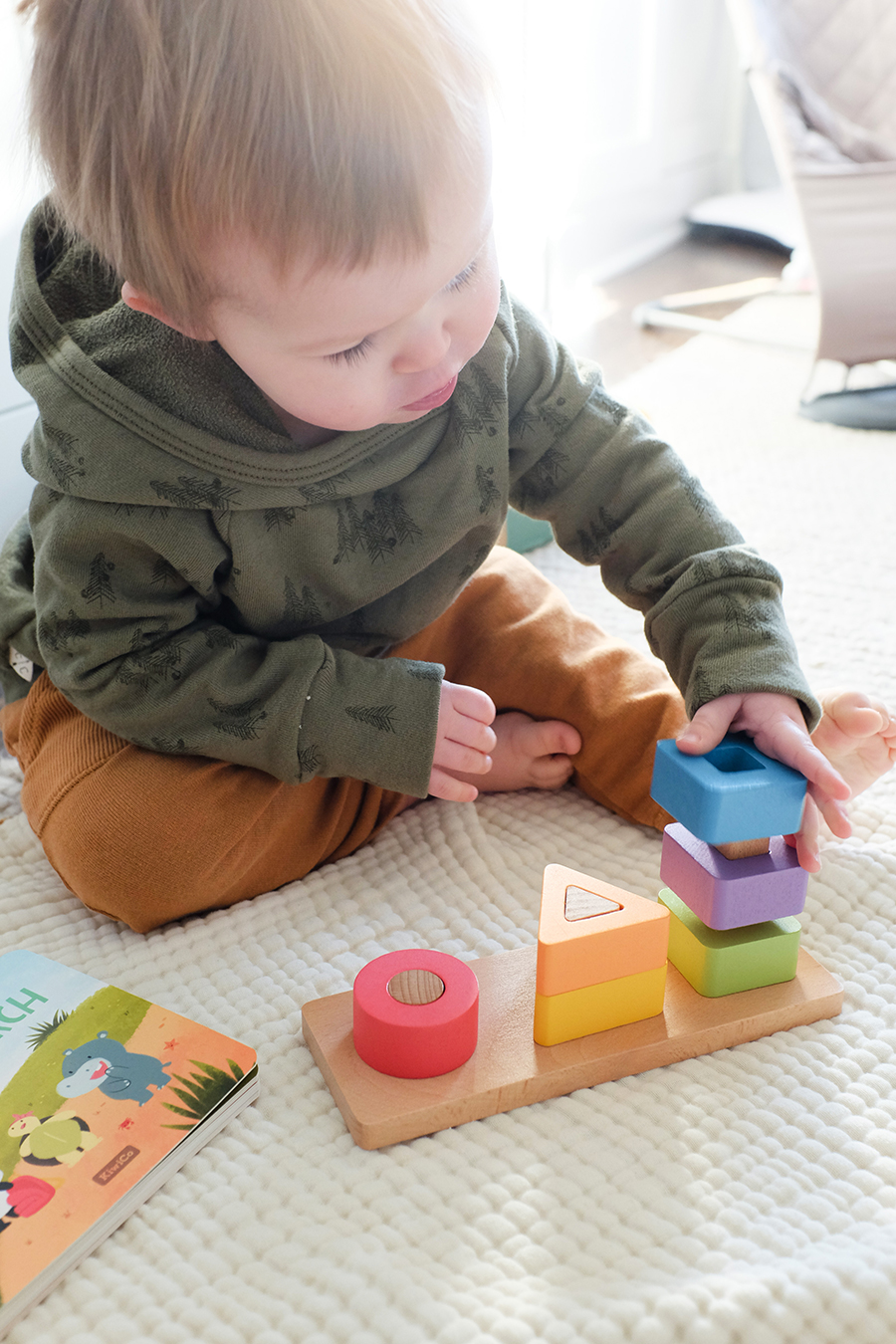 And whatever you do, do not feel guilty for not giving your child your undivided attention 24/7. You’re helping them become more creative and more independent. These are valuable skills they’ll carry with them their entire lives. Independent play is a win-win all around if you ask me, and like I said, I cannot recommend it enough. It’s helped make our months of two-under-2 so much more enjoyable rather than stressful.

Do you have two kids under 2 years old? Any tips you want to share? We’re all in this together! Leave them in the comments!

This post was in partnership with KiwiCo but all of the opinions within are those of The Everymom editorial board.

GIVEAWAY! After a year like this past one, this Mo

@nephjeanty writes, "When you look at this picture