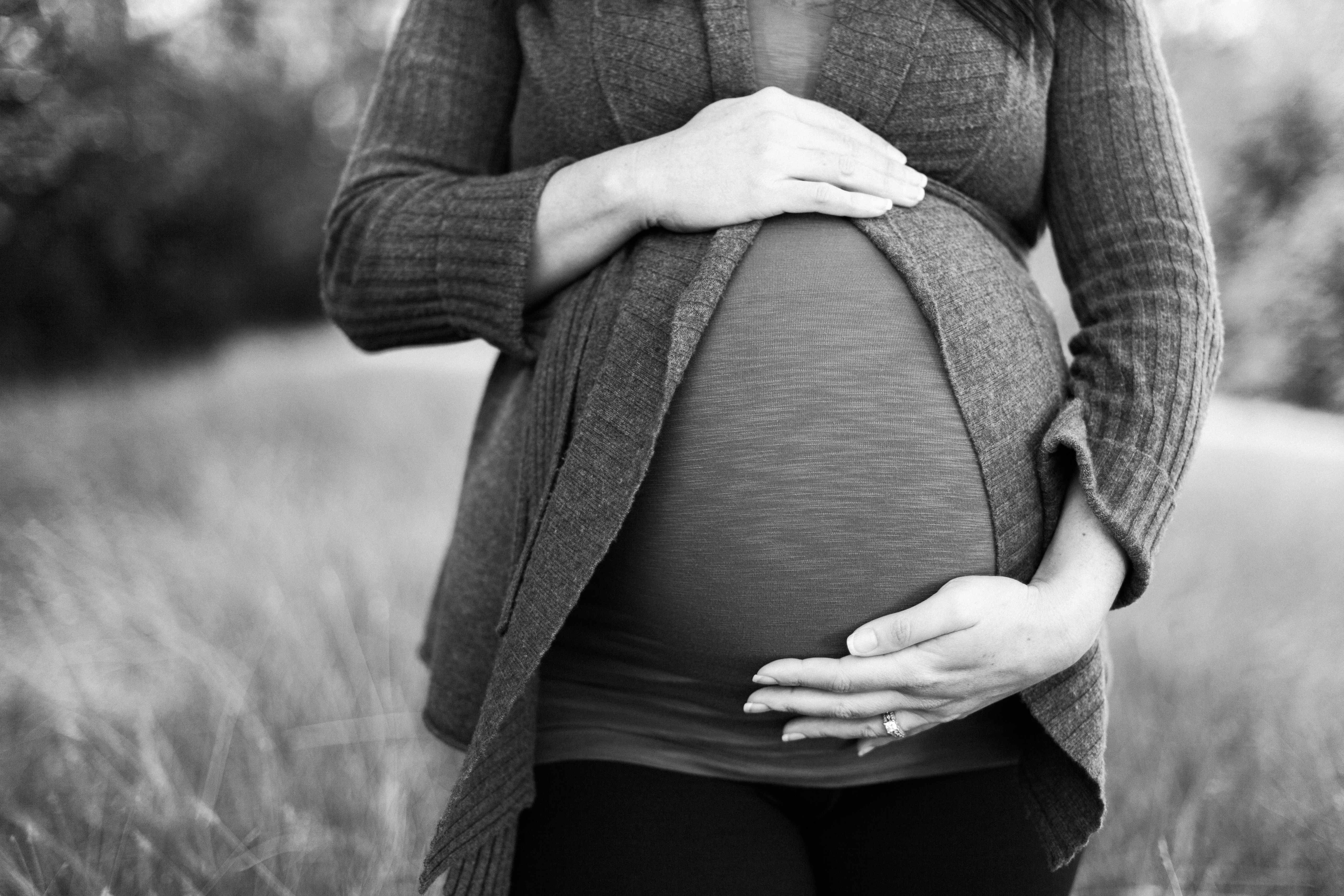 It feels like everyone says it: delivering a baby is the most life-changing, incredible, and incomprehensible experience of a lifetime. People say the miracle of birth will shake you to your core and leave you with a sensation of pure joy.

But what if it doesn’t?

What if the moment arrives, and you endure 10 long hours of uncertainty, exhaustion, pain, nausea, and anxiety; and rather than discovering the euphoria you’ve been waiting for, you fall into a black hole? I never dreamt that would be my reality until giving life to my daughter nearly took mine.

There are many words to describe labor, but mine began as truly empowering (thank you, epidural!). My OB-GYN was available last minute, and I couldn’t believe my luck. I trusted her completely, and because I was being induced for preeclampsia, my anxiety needed her extra reassurance. She coached me through the pushes with ease, so much so that I even giggled with excitement.

“We’re getting close! Do you want to feel her head?” she inquired. I grimaced. “Are you sure?” she asked, “When else will you have a chance to feel your baby’s head as she’s being born?”

She had a point.

I took a breath and reached down. A soft patch of hair greeted my hand. A jolt of adrenaline tore throughout my body. “Oh my God! I’m having a baby! This is so crazy!” I squealed, and my husband laughed at me. It was nuts.

And then, reality began to set in.

The mood in my once-chipper delivery room quickly grew dim. My delivery team of two doctors dramatically multiplied and in came an anesthesiologist, two resident OBs, and a cardiologist — amongst a few others.

“We’re going to give Callie to your husband. J.J., please take a seat over here and stay put,” my doctor instructed carefully.

I felt the back of my mouth dry up, paving the way for that familiar sense of fear.

“What’s going on?” I asked, as I watched my heart rate skyrocket on the monitor.

“We’re having trouble delivering your placenta. It doesn’t seem to want to come out on its own. You’re bleeding quite a bit, so we need to take action,” she answered and went to work.

In a traditional delivery, after the baby arrives, the delivery of the placenta begins shortly thereafter. At least, it should. As my doctor later explained, typically the placenta peels off the uterine wall like a piece of tape. My placenta, however, was “glued” and wouldn’t budge. Pathology would show I had undiagnosed placenta accreta, a potentially life-threatening condition where the placenta abnormally lodges itself too deeply into the uterus. It can cause massive, and even fatal, postpartum hemorrhage.

(Placenta accreta is a rare condition that typically arises in women with prior uterine trauma, such as a C-section or other surgery, but can also appear randomly as it did in my case. Talk to your doctor about your risk factors, especially if you’ve had a prior C-section.)

Pathology would show I had undiagnosed placenta accreta, a potentially life-threatening condition where the placenta abnormally lodges itself too deeply into the uterus. It can cause massive, and even fatal, postpartum hemorrhage.

I lay helplessly in sheer terror, watching nurse after nurse weigh soaked red towels, tallying up my blood loss. Someone called down to prep an OR, and I felt myself feeling fainter by the minute. I will never forget the look on my husband’s face as he cradled our sweet girl – we did not know if I was going to leave this delivery room alive.

My incredible team acted swiftly and inserted a special balloon designed to assist in cases of massive hemorrhage. After an hour of scraping my uterus, an ultrasound confirmed every piece of placenta was removed. I lost over a third of the blood volume in my body, but somehow, miraculously avoided a hysterectomy.

The next several hours are a blur — a fever that prevented me from eating or drinking, a constant state of convulsions, and a far-too-fast heart rate. Our families sat patiently in the waiting room, assuming it was simply a long and laborious labor. My husband would not leave the room to update them until he knew he not only had a daughter, but a wife.

I can’t begin to describe how lucky I am to be here today, and every medical professional whom I met during my hospital stay reminded me of the same.

In the moment, I had no idea what I’d just been through. I’d never felt so weak and so out of it in my life. The pathology report wouldn’t come back for a couple weeks, and I did not know how to begin to process that I nearly bled to death while delivering my daughter. I was so swollen from the fluids pumped through my body to keep me alive that I still don’t recognize myself in the first picture we took as a family.

What pains me most is that after that first brief moment of skin-to-skin after delivery, I have little to no memory of my little girl in her first days of life. I can’t picture her first expression at the hospital or hear the gurgle of her first snorts or cries. Instead, I just visualize a nurse telling me the blood transfusions would feel different than a traditional saline IV — I can still feel that thick, throbbing sensation.

I did not know how to begin to process that I nearly bled to death while delivering my daughter.

When we finally arrived home, I asked my husband to help me sit down in the shower. My depleted hemoglobin levels would leave me limp and excessively fatigued for weeks. I cried big, heaving sobs that took my breath away. I was supposed to be on cloud nine. How was I supposed to care for my newborn when I could barely stand up?

How was I supposed to care for my newborn when I could barely stand up? 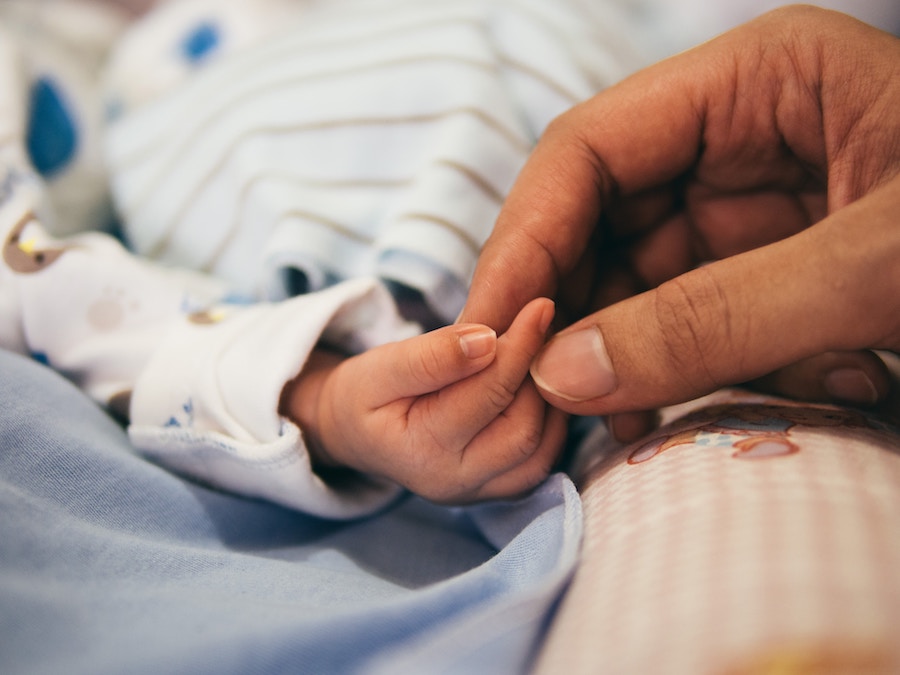 For nearly a year, if anyone brought up Callie’s birth, it sent me into a tailspin of tears. It was such a seemingly simple question, but I couldn’t think about that day, or sometimes even look at her, without crying uncontrollably. It felt like I would never be able to speak about her birth or even her existence “normally” – whatever that meant.

As ashamed as I am to write it, I was resentful. After meeting with a postpartum therapist who specializes in birth trauma, I learned my memory lapses, and gut-wrenching feelings, are to be expected in a situation like mine. My PTSD and postpartum anxiety created serious obstacles for me to overcome.

Over time, and with the help of my phenomenal husband, my support system, and therapy, I began to heal. As I physically recovered, I could work on mentally turning my attention forward. It may not have been the case on Callie’s first birthday, but by her second, I celebrated the day as the day of her birth – not as the day I almost died.

It may not have been the case on Callie’s first birthday, but by her second, I celebrated the day as the day of her birth – not as the day I almost died.

After joining a few support groups online, I learned there many women who unfortunately experience traumatic deliveries due to serious complications. In fact, USA Today recently published an investigative series uncovering that every year, 50,000 U.S. women suffer severe injuries or complications leaving them lucky to be alive.

As I approach my daughter’s third birthday, I reflect on my journey and sometimes cannot believe how far I’ve come. I’m the luckiest mother to the sweetest and goofiest little girl who makes my heart burst. And then I realize that somewhere, there is another new mother sobbing in the shower, wondering how she will ever recover from her deeply traumatizing delivery. Our stories will differ, but we can find one thing in common: hope. If you’ve experienced a traumatic recovery, I wish you hope, because I know in those moments, hope is hard to find.

If you’ve experienced a traumatic recovery, I wish you hope, because I know in those moments, hope is hard to find.