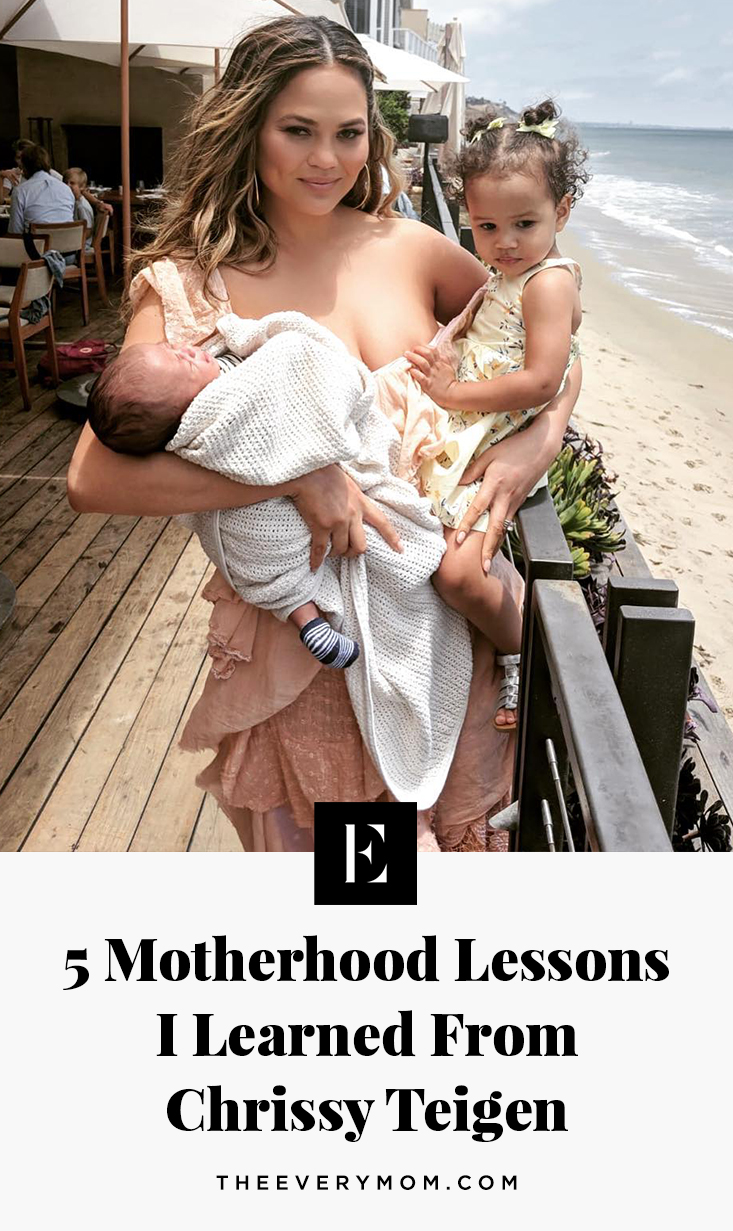 I’m endlessly curious. As an Enneagram 5, it’s in my nature.

Of course, when I became a parent, this fascination took a new turn. I immediately wanted to consume everything I could find on being a parent, raising children, and what it would all be like. Yes, I know you can never actually know what it’ll be like – there’s no book or guide that will give you an exact path through motherhood. But it satisfies my soul to learn.

As I get further into motherhood, I find that my endless curiosity with the world and its people does me well. And what I’m finding by continually diving into other women’s perspectives, experiences, and stories is that we can learn so much from those around us. In that spirit, I’m diving into a new series – one that explores the influences of another mother on my own parenting journey.

And today, I’m sharing five motherhood lessons I learned from Chrissy Teigen – a national treasure, by all counts.

1. There is no shame in motherhood

The thing I love most about Chrissy Teigen is that she is incredibly down-to-earth and unapologetic. She’s said in the past that she feels strongly about sharing the realities of motherhood to make others feel less alone, and I couldn’t agree more with that sentiment.

What this also does is remove some of the shame and taboo that surrounds the less-glamorous parts of motherhood, like the postpartum experience. Mesh underwear, leaking breasts, flowing blood, incredible pain and love and confusion – these are things that are common to all of us. They’re also things we tend to hide and not talk about. But you know what? There shouldn’t be any shame in any of it.

I girl I have HELP and a half. That’s it. There is no way I could have done it without it. I’m so lucky to have it and I don’t know how anyone else does it. I have so much respect for all of you. (also our amazing set provided an amazing daycare room) https://t.co/bSK7v7gvRn

Chrissy has a supportive husband, able-to-help mother, supportive work environments, and the ability to afford all kinds of outside help, and she still is very clear that she cannot do it all. So, why do I think that I can?

Managing motherhood along with other work, family, household, and additional responsibilities is no easy feat. And though we hear again and again that it takes a village, the reality is that not everyone’s village is that extensive or reliable. The reality is that you cannot have it all – motherhood requires a lot of sacrifice and compromise. It is a push and pull, a constant struggle toward intention and balance, and it is necessary that we let go of a few things to make it through.

What I’ve learned is to not feel guilty about what I have in my corner and not feel resentful towards what I don’t have that others might. We’re all trying our best.

3. Judging other moms is UGH

Listen. No one is perfect. And in the context of motherhood, really no one is perfect. We may not make the same choices as another mother, but without living her life and walking in her shoes, we can’t judge her decisions.

I always tell my kids that mistakes are how we learn, and that goes for grown-ups too. As mothers, it’s likely that we make mistakes daily (at least, I know I do). This is a part of the process. But shaming each other over our mistakes and misjudgments and choices doesn’t have to be.

Being a mom is hard enough without continuing to make each other feel like shit.

4. Motherhood is as complicated as it is messy

when luna is awake i want her to sleep and when she is asleep i want her awake. this is my parenting life.

We can all relate to the feeling Chrissy describes in her above tweet. Parenthood brings out the most complex emotions in all of us – the feelings of being simultaneously frustrated and exhausted, proud and heartbroken, elated and distraught. It’s often described as a rollercoaster, and it certainly feels like that sometimes.

We love our kids unconditionally, but they make us more exasperated than anyone else. We need a break, but then we miss them if we getaway. We love being their mothers, and at the same time, we mourn the women we were before.

Motherhood, as I’ve learned, is an intricately layered mess of complicated emotions.

5. We need to look out for one another

In my deepest, darkest post-partum depression, I would have personally never called a phone number. If John or my doctor never reached out, I would have never even known. It really can be a lonely hole. Watch the people you love and don’t be afraid to speak up.

The messiest part of motherhood is often hidden underneath veils of plastered on smiles and Pinterest-perfect images on social media. Some of us have carried a darkness within us that is not visible to anyone else. As Chrissy says, “It really can be a lonely hole.”

As mothers, we are members of a unique cohort – one that includes the grave responsibility of raising the next generation of humans. It’s a pressure that can make even the strongest woman falter. But this responsibility stretches beyond our kids and onto each other – we are responsible for each other too. No one else knows what it’s like, so it’s sometimes hard for others to see when something is amiss.

So, let’s watch the people we love.