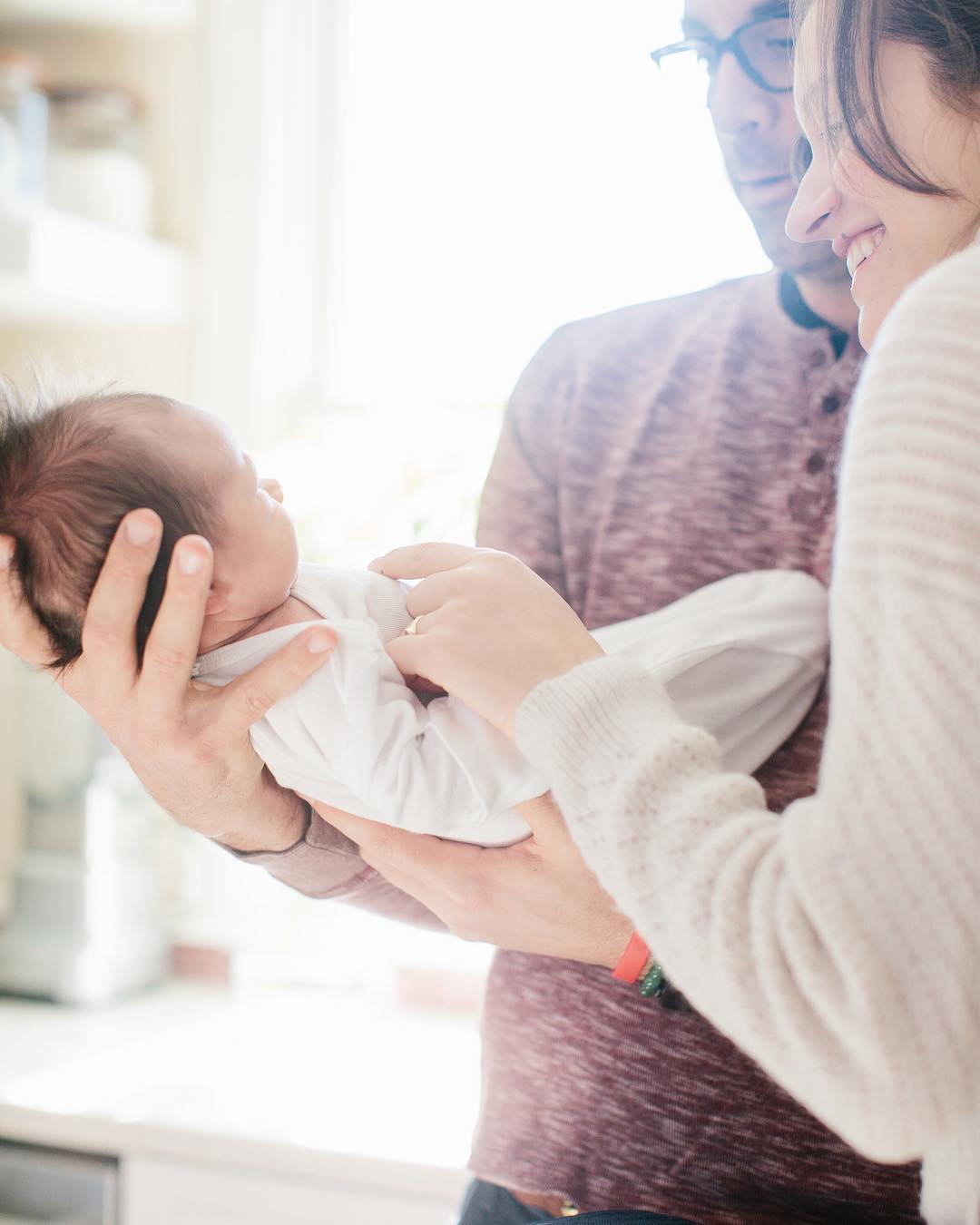 A few weeks after we brought our son, Ezra, home from the hospital, I woke up to screaming newborn cries. Bleary-eyed, I stumbled out of bed to fumble through the now-usual routine: he was either hungry, uncomfortable, or wet. The last one seemed to be the issue, so I carefully attempted to change his tiny diaper as quickly as possible — and then got hit with projectile poop.

Did my beloved husband, Jared, stir from his slumber? No, he did not, until I hollered his name at full volume with an insistent, “OMG, can you help me?!” Which led to a really awesome who-wakes-up-more-in-the-middle-of-the-night argument at 3 a.m. Hashtag blessed. My partner, whom I adore and just created a life with, was also the most annoying person on the planet… and I’m guessing he felt the same way about me.

Erika Labuzan-Lopez, a marriage and family therapist who works with new parents, says this is completely normal: new parents are bound to fight about all kinds of things when a baby comes into the picture since it is such a massive transition on multiple fronts. “Conflict increases for 92% of couples in the first year after having a baby — so, practically everyone,” she notes. “It’s a very difficult time in many relationships due to both the emotional aspects of bringing a life into the world and taking care of it, and the logistics of how to get everything done.”

The good news? Even though disagreements are bound to happen, you can work together as a couple to figure out some survival strategies. Here are four arguments new parents have, why they’re totally normal, and how to get through ’em:

One Saturday during maternity leave, I decided to run some errands; I desperately needed to get out of the house that day, and besides, I swore I would never be “that mom” who didn’t trust her partner to be competent enough as the lead parent. Jared could handle everything for an hour. When I arrived back home, Jared was calmly sitting on the couch feeding Ezra a bottle… and I immediately freaked out. “I need to breastfeed him, my boobs are about to explode,” I exclaimed. “Why are you giving him that? He shouldn’t eat again for another thirty minutes!” “Uh, he was crying really hard?” Jared retorted. “What was I supposed to do, ignore him? He was hungry!”

Kelley Kitley, a licensed clinical social worker who frequently coaches new parents, says the most common argument she hears involves this division of labor of who does “more”: who gets up with the baby at night, who does the laundry, who gets to sleep in, who has more energy, who socializes, etc. And it usually points to one or both parties not getting their needs met or feeling some combination of underappreciation or disconnection. Add on exhaustion and a general sense of being overwhelmed with adjusting to life with a baby, and you’re probably going to run into resentment and tension eventually.

“You’ve gone from being a couple to being a family and with that comes all kinds of questions and changes you haven’t experienced before, so how are you supposed to know how to deal with them?” asks Labuzan-Lopez. “New parents are still trying to figure out the routines, which are ever changing with an infant, and how the family identity and rituals will form.”

Instead, manage expectations through better communication. Jared and I didn’t ever talk about what it would be like to have one person on duty 24/7 for feeding, nor did we realize how stressful it would be for me to be that person, and for him to sit idly by, unable to help. For us, the solution involved adding a few bottles of formula to the mix, so I could have a bit more freedom but still breastfeed, and he could have more autonomy to soothe our son when I wasn’t available. Whatever your situation, talk openly and honestly, and then figure out a plan moving forward together.

I knew having a baby meant less time for certain things. What I didn’t quite expect was the fact that Jared and I would effectively compete for access to certain time slots — like when we both got home from work, and he wanted to hit up happy hour with a coworker and I wanted to go to a yoga class. Figuring out who got to do what and when felt unfair to both of us, mostly because we were still accustomed to having control over our own schedules. But when there’s a kid involved, one parent off duty means the other parent (or someone else) is on, without any additional help.

Afton Strate, a licensed clinical marriage and family therapist who specializes in supporting couples and pregnant or postpartum women, calls this one of many dramatic shifts for new parents. “The time you may have had pre-baby to take a shower, work out, pursue hobbies, or enjoy some alone time can be abruptly impacted by having a newborn who needs your time and care,” she notes. “When we have less time and energy to emotionally refuel and we’re in the midst of a major life transition and potential sleep deprivation, this can naturally lead to arguments for many couples.”

You should both continue to prioritize individual self-care, she continues, but be more flexible in what that looks like, knowing it involves a direct trade-off with your partner. If you prefer to exercise in the morning, then make sure you’re a little more hands-on with the baby in the evening to give your significant other a break. If you want to pop out for a drink with a buddy on a weeknight, be the one who gets up at 5 a.m. If you know you’re maxing out, and you need a solid chunk of downtime, ask your partner how to help make it happen. Strate also recommends meeting with a therapist to help with these transition points, especially if you think you may struggle with postpartum anxiety or depression.

And let go of what’s “fair.” It’ll never be perfectly even; instead, aim to rely on your partner for support in order to fill your respective bucket, and vice versa. When you both look out for each other, your chances are much higher to get the “me” time you need.

Everyone told me that after about six weeks, I’d get the all-clear from my doctor for sex. What no one mentioned is that I may not want to have it in the first place. It took us a solid six to nine months to get back in our groove, so to speak — much longer than I ever expected, which made me feel equal parts confused, frustrated, and alone.

I remember texting a girlfriend, asking her if it was “normal” to feel how I felt — which was that sex kinda hurt and I felt too tired to be in the mood — and she replied, “Oh god, yes.” I laughed out loud. In my head, I worried my body would never recalibrate, and our relationship would consequently never be the same. In reality, adjusting to a new norm simply took time, patience and a whole lotta trial and error.

“Re-establishing sexual intimacy after birth can take time and be complicated, especially with sleep fatigue, a nursing mother, and a baby near the bed,” says Dr. Wyatt Fisher, a licensed psychologist and marriage counselor who leads couples retreats in Texas. “Most new parents don’t spend enough time together for undivided attention and this can create tension in the relationship.”

4. Which parenting style is “right”

Every couple has moments of conflict related to who is “right,” and parenthood is no exception. Whereas I tended to lean on intuition when making a decision, Jared preferred to Google; this meant we were sometimes at odds regarding the “best” way to handle a situation, whether it involved discipline, sleep training, or babysitters.

All parents are also different people with unique experiences and perspectives, which parenting coach Elisabeth Stitt says impacts almost every decision a couple makes with a new baby and lead to a long line of questioning like: Who may the baby be left with, and for how long? How much technology around the baby is okay — is it okay to watch Criminal Minds with baby on your lap? Okay to scroll Facebook while you are breastfeeding? What should a spouse do when a relative gives their parenting opinions?

“Most new parents argue over parenting styles, and partners often take two routes to deal with this: they either step in all the time to correct their partner which can be taken as criticism, or they step back and say nothing and then feel like their partner doesn’t understand them,” explains Strate. “Both of these actions can lead to challenges for the relationship, but both styles can have merit, so the idea is to work together as a team and take the best parts of both approaches. Even if that can’t be accomplished in all situations, talking about it will help you to understand your partner’s reasoning.”