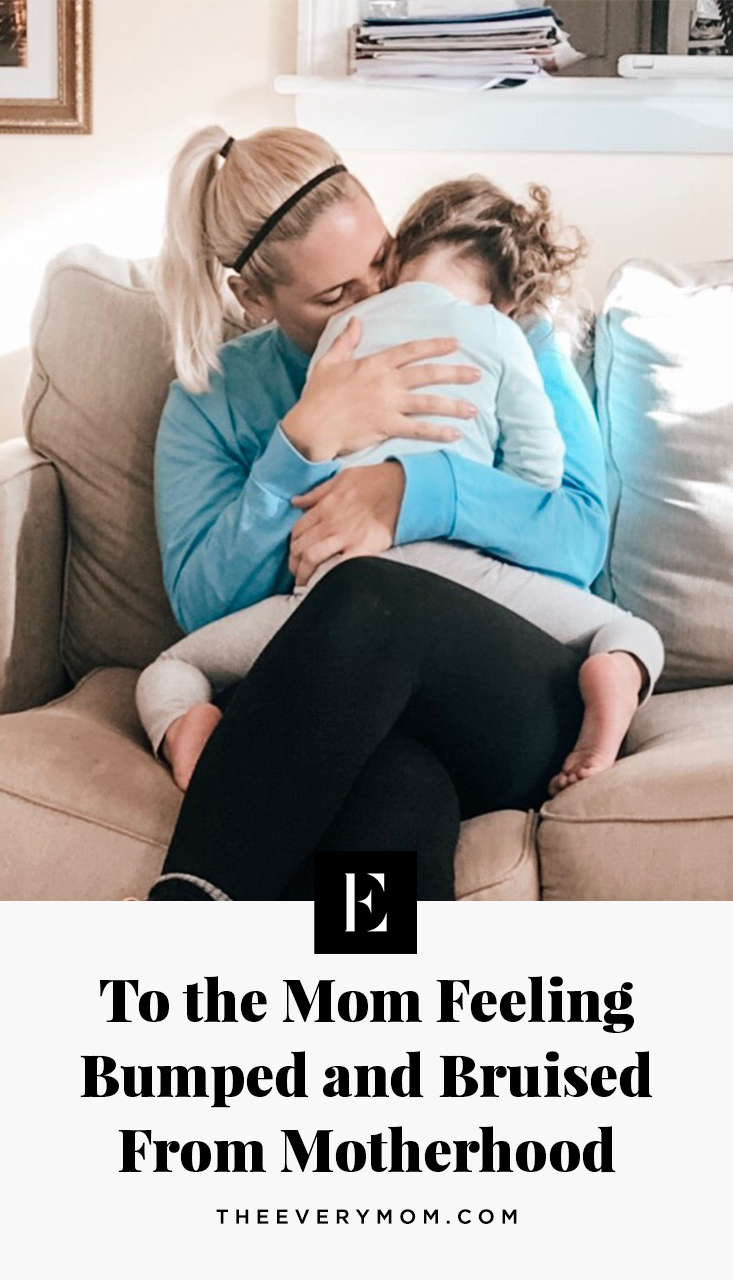 Right now I have a huge bruise on the back of my left upper thigh area because I sat on the couch without looking first. Big mistake, right? Rookie mistake, really. You always have to look first. Because if you don’t look, you’ll inevitably plop yourself right onto a very pointy Woody doll who had already called dibs on the cushion you were aiming for. (Like I did.)

I also recently recovered from a bruise/bump combo on my forehead that was the result of my standing up and turning too fast while putting laundry away. Seriously. I slammed right into the side of my kid’s closet, and it hurt. So, so bad. (Laundry is an extreme sport, didn’t you know? Best to stay away.)

My injuries are not only self-inflicted. A couple of months ago, my then 17-month-old kiddo bit me so hard it left a bruise on my arm. If you’ve never had a toddler bite you with all their might, you should (not) try it sometime. Because it hurts. A lot.

The amount of times I’ve injured myself in my day-to-day momming throughout the past five years is high. I’ve thrown my back out from carrying a heavy infant car seat, have yelped in agony the 500,000 times I’ve stepped barefoot on small toys scattered across the living room floor, and have held back tears (or just straight up cried) from banging my head after climbing out of some small space my children made me go into with them. I’ve given my kids hundreds of pony rides, and those rides, paired with the number of times I pick my children up on any given day — well, let’s just say, my back probably hates me very, very much. 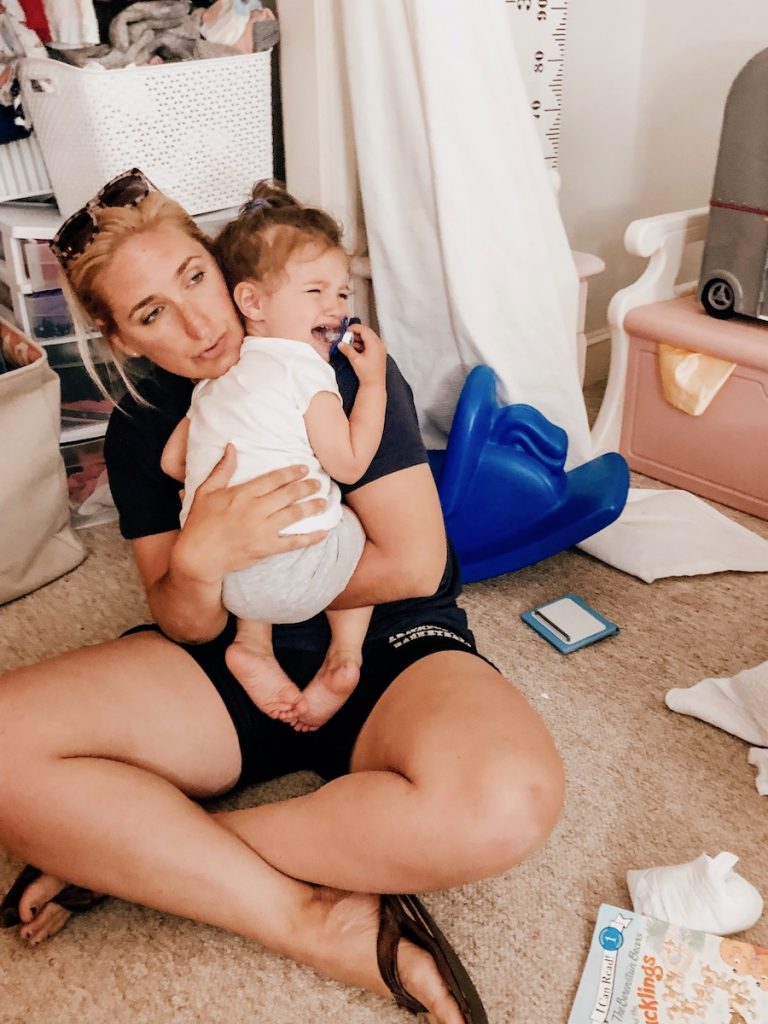 And these injuries are all after the physicality of the before — before they were even born. I carried each of my three children for 40+ weeks, labored for hours upon hours, delivered them, then spent weeks recovering from their births. I’ve spent hundreds of hours hunched over, breastfeeding each child, and many hours dealing with extreme nipple pain simply trying to figure out breastfeeding in the first place.

I’ve breastfed for a collective 55 months of my life and am still currently breastfeeding my 20-month-old. My breasts have seen it all — they’ve encountered mastitis (YIKES), been bitten, pulled, yanked, pinched, scratched — all by the humans I created.

My arms are tired from carrying sleeping children from the car to their bed or from my bed back to theirs, not to mention from the groceries and humongous baskets of laundry that always seem to be finding their way into my hands.

My legs are sore from running around all day long carting children from here to there, fulfilling requests, getting things done, sitting down and getting up one million times, and chasing after my wild toddler, of course.

My back aches from a weak pelvic floor/core situation courtesy of my three pregnancies. It hurts my back to bend over the tub while bathing my kids, it hurts while bending over to get my toddler’s shoes on, and it hurts when they kick my poor back through the night after they climb into our bed.

My head throbs on the days when the noise is extreme. When the chatter is incessant, the singing is way more like screaming, and the whining seems constant. 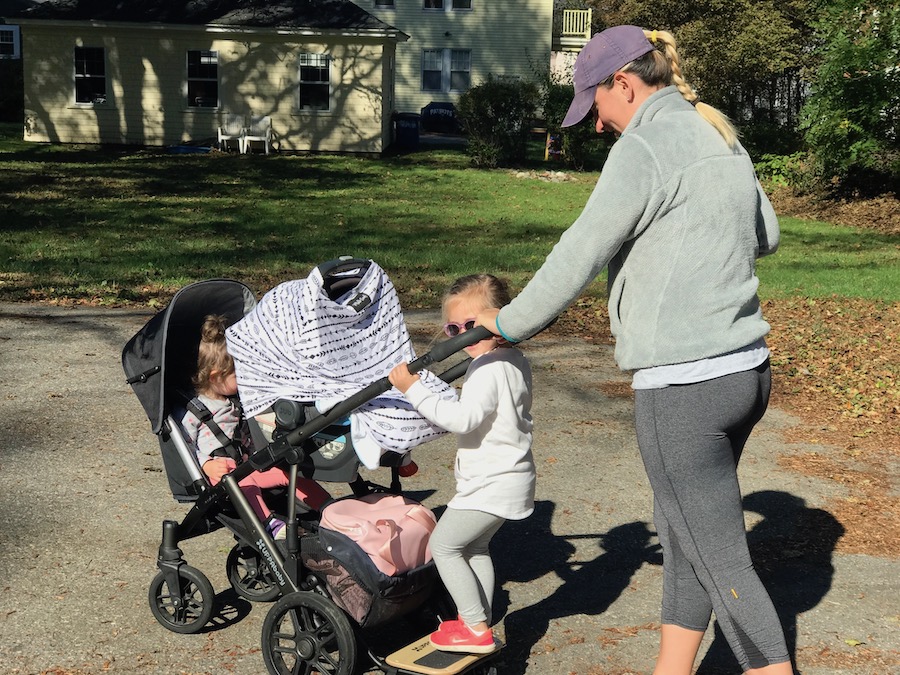 My mind is frazzled from carrying the weight of the worries of motherhood, and also from trying to remember the 5,000 things on my to-do list.

My heart is fragile from protecting these three beautiful souls that have been entrusted to me. It bursts from all the love packed inside of it, and it cracks with the bittersweet feeling of them needing me less and less as their independence grows.

I knew motherhood would be physical, of course. But I never realized just how physical. I never understood how much my body would go through even after pregnancy and delivery.

But the thing I’ve been reminding myself of lately is this — motherhood will not always be this physical. One day, they won’t need (or want) me to pick them up, they won’t ask me for a pony ride or to sit on my shoulders, and my youngest will have weaned from breastfeeding.

One day, we will trade the physical demands with more emotional or strategic demands older children require. I’d be lying if I said I wasn’t nervous for the days of crying over broken hearts and arguing over a later curfew. But I’m confident in the fact that I’ll deal with those new challenges the way I deal with today’s physical challenges — with an open heart and mind. That’s all we can do, really, now when they’re small, and later when they’re big.

So, to the mother deep in the trenches of being climbed on and in constant motion, I want you to know — I am with you. 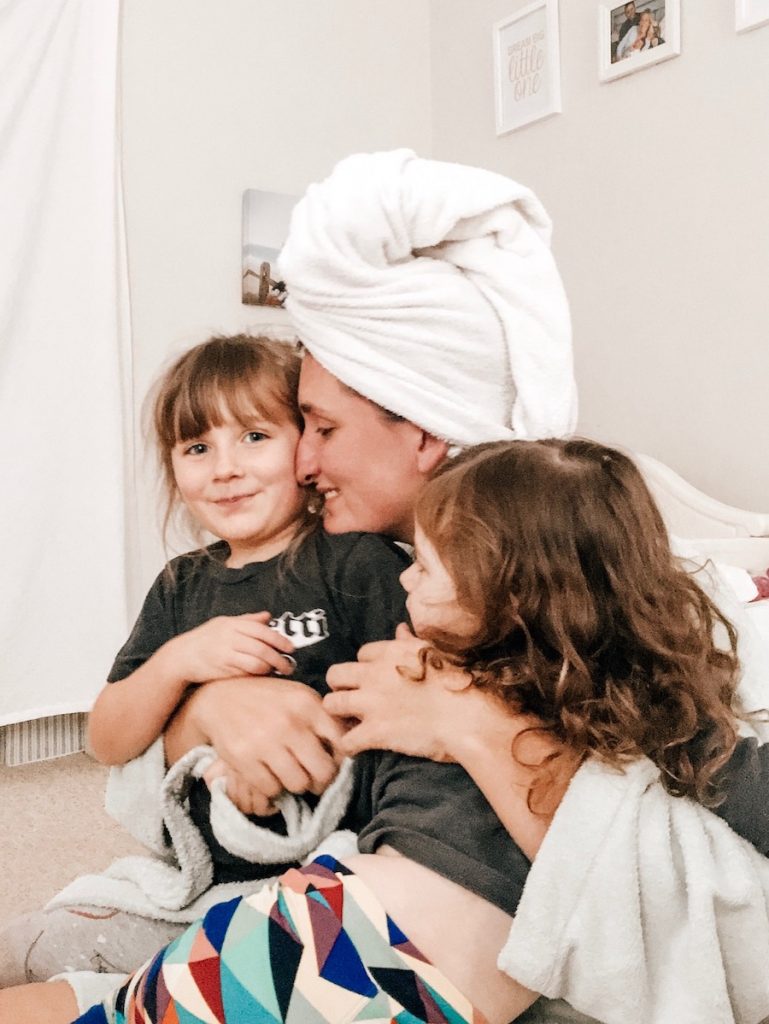 I’m with you and your tired arms that hold a monumental amount of responsibility.

I’m with you and your sore legs that move mountains for your family.

I’m with you and your aching back that carries the weight of the world upon it.

I’m with you and your throbbing head that selflessly sings along to “Let It Go” even when all it wants is silence.

I’m with you and your frazzled mind that makes the magic happen every single day.

I’m with you and your fragile heart that contains all the love in the world.

The piggyback rides and bite bruises won’t last forever — I promise. We won’t always be looked at as if we are a jungle gym. But, truthfully, I don’t think our mountain-moving or magic-making is going anywhere for a long while.

That’s why mothers were made to be strong.

And if you ask me, mothers are the strongest humans around.