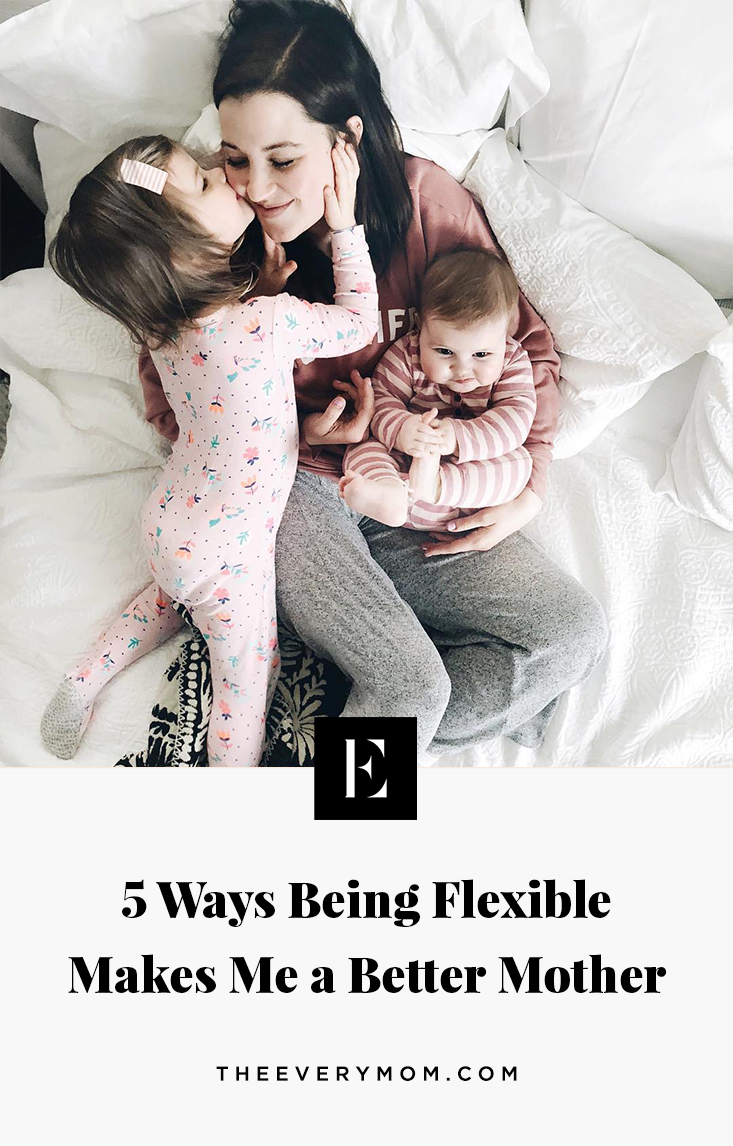 If you had asked anyone in my life if I was a go-with-the-flow type of gal before I had children, the answer would have been a resounding “no.” I loved schedules and regimen – I planned my days down to the minute and my meals for the whole week. This served me well in many aspects of my life at that time and it wasn’t hard to maintain when the only person I really had to worry about was myself (and my mostly-agreeable husband and black lab).

When I found out I was pregnant, I started to visualize the type of mom I wanted to be. I thought I would breastfeed exclusively for at least six months, my children would not be allowed screen time under any circumstance, they would be properly sleep-trained with convenient (to me) nap schedules, and they would eat only organic whole foods.

Fellow moms who are reading this, I understand if you’re either rolling your eyes or giggling at my naiveté.

My life with 9-month-old twins is nothing like I intended or imagined. Not only have I come to understand the necessity of ditching my strict policies, but I’ve actually found that the more flexible I can be with my approach to parenting, the better mother, partner, and overall human I am.

Sounds like a solid concept, right? Well as someone who finds their happy place in an environment of control and order, implementing this flexible mindset hasn’t always come naturally or easily. I take small steps every day to let go of rigidly and embrace the chaos.

Here’s how to approach being flexible as a parent and why it’s essential in new motherhood.

1. Find the grey area (and hang out there)

Breastfeeding or formula feeding. Co-sleeping or crib sleeping. Purees or baby-led weaning. It easy to think that you need to have a firm stance on your approach to parenting in every regard. We’re taught that there are tons of options out there and once you’ve decided on a strategy, you better stick firmly to it.

In all aspects of my life, parenting included, I’m trying to ditch this notion and live in the middle. What does that mean for us as moms? It doesn’t have to be all or nothing. Say you’ve decided to breastfeed. Amazing! Exciting! You and your baby are going to bond in a special way and they’re going to get all of the awesome nutrients your milk has to offer. Well, if a couple of weeks passes and you are spent from feeding this tiny human every two hours and it’s starting to take its toll, adjust.

Instead of pushing through your exhaustion, you — or better yet, someone else — can feed your baby a bottle once a day. It might feel scary at first — like you’ve abandoned your beliefs or tarnished your nursing-mother label, but occasionally offering a bottle doesn’t mean you’re not a breastfeeding mama. It just means you’re a breastfeeding mama who has found her grey area.

Being flexible in your approach to preserve your mental and physical wellness makes you a great mother and you and your baby will be better for it. 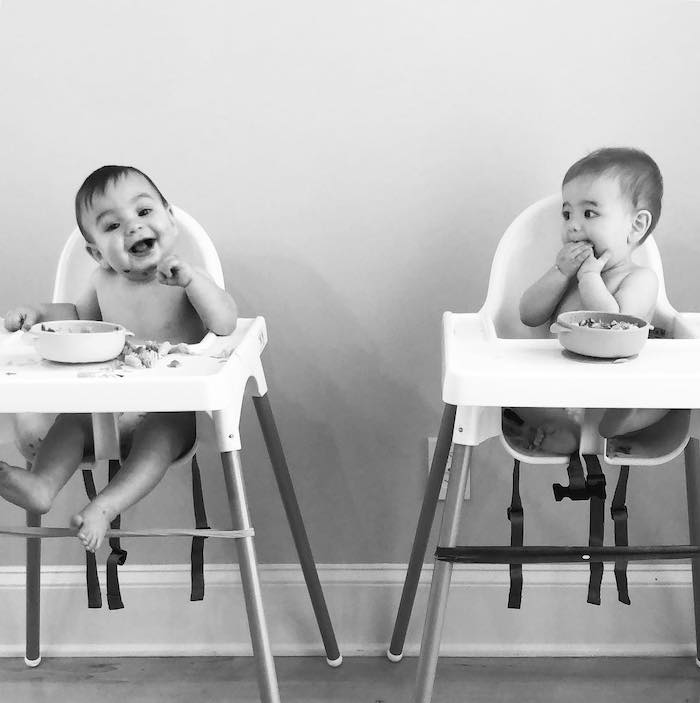 I called my husband a few weeks ago and said, “I failed at mom-ing today.” I went on to explain that one of my twins had boycotted her naps all day and her sleep schedule was completely derailed. He responded, “Sounds like she failed at being a baby.” I laughed and moved on with my day.

By the evening both babies were back on schedule and snoozing away. As I lay in bed that night, I thought back to our conversation and decided that I was going to replace the word “fail” with “flexible.”

Mom guilt is real. We take a job that’s insanely hard to begin with and make it even harder by putting an enormous amount of pressure on ourselves not to fail. But, it’s impossible not to fail.

What we can do is change our mindset around failure as a parent. Do you have a kid who refuses to nap? You’re being flexible to their sleep needs on any given day. Do you have a baby who isn’t yet into solid foods or isn’t yet into potty training? You’re being flexible with their developmental timeline. Did you forget your kid’s coat at home on a slightly chilly spring day? Pass your scarf or hoodie into the stroller and keep on walking.

We encourage our children to make mistakes in order to learn and grow — we should expect the same from ourselves.

Being a mother is the most exhausting thing I’ve ever done, hands down. In the past, I’ve worked a full-time job with three simultaneous side hustles, and taking care of my twins wins by a landslide in terms of constant fatigue.

While I wouldn’t change it for the world, I’ve learned very quickly that being flexible helps keep me from feeling entirely depleted at the end of the day. If I followed every single recommendation from parenting gurus on the internet or steered clear of every single thing that may be bad for my child, I would not be surviving right now.

My brain functions as a running checklist of what falls under the good or bad column. For example, I’ve heard that my children should only play with educational toys, all their toys need to be appropriately sanitized, and that they shouldn’t have too many electronic toys. Also, activity centers, bouncers, and walkers are horribly dangerous for their development and safety. Independent playtime is important, as is one-on-one interaction (sorry, kids, that is not in the cards for you right now!). Television is a hard no. Fresh air is important (but only if it’s not too hot or too cold outside). You should take your children to museums, but not during flu season. Don’t take them anywhere during their scheduled nap time, but they really should learn to nap on the go. Is your head hurting yet? Mine is.

I aim to be mindful and flexible and not let these guidelines dictate my brain space constantly. These facts float around in my head but I do not let them weigh me down. My children have plenty of educational and interactive toys and they also have ones that light up and play music. Sometimes they play alone, and sometimes I sit between them and facilitate play. Last week I let them play with a dog toy while I drank a cup of coffee.

They’re still alive and so am I. 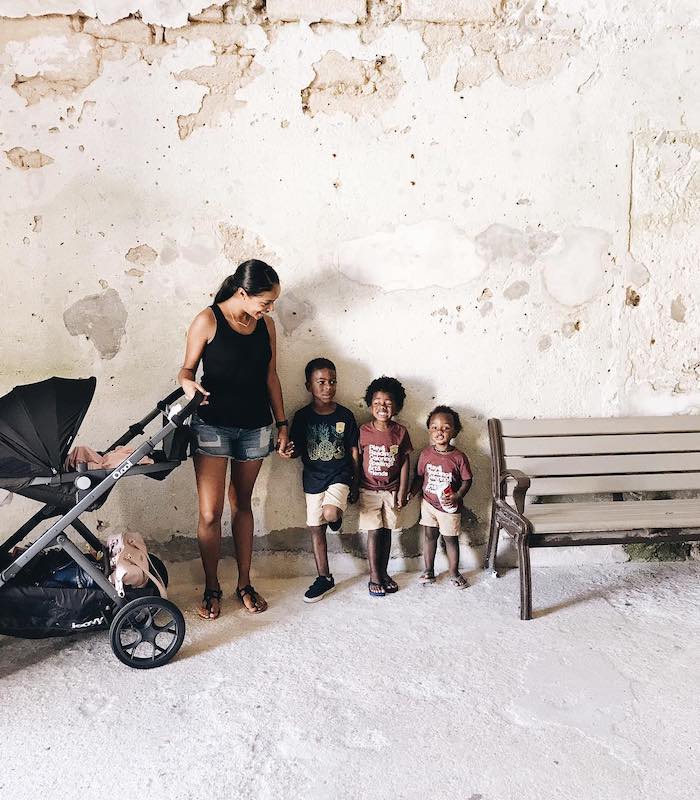 4. Encourage your children to stretch their boundaries in new situations

When my twins were 5 months old, we took them to a college football bowl game. Our alma mater was playing just a few hours from home, so we bought tickets and went for it. I was terrified at the prospect of bringing two infants to a football stadium where they would need several naps and a handful of feedings. Since it would just be my husband and myself, we’d each be holding a child for the entirety of the game, and if one of us needed a bathroom break, the other person would be left holding two. Up until this point, my kids had never once slept being held and I was convinced they were incapable of doing so.

I could have said “Absolutely not. This is a horrible idea.” But instead, I pushed myself and my children to be adaptable and guess what? Everyone rose to the occasion. They slept (a lot). We cheered for our team, snapped tons of cute photos, and stayed the entire game. Would they have preferred sleep in their dark nursery with a sound machine and a sleep sack? Probably. But they figured it out. And so did I.

Of course, we strive to provide a consistent and comfortable environment for our children most of the time. But, I’m hopeful that the more we push them outside their comfort zone (and ours) the more they’ll learn to easily adapt when they’re in an unfamiliar situation.

5. Teach your children the art of balance

Just like we teach our kids to talk and walk, we need to show them what balance and flexibility look like. Sure, my kids are less than a year old, but it’s never too early to start. I want them to have the ability to bend without breaking, so I’m teaching them how.

I strive to feed them organic, whole foods, but occasionally I let them have a bit of a cookie. We limit screen time in our home, but if I need to unload the dishwasher, I’ll throw on a (somewhat) educational show for 10 minutes. My husband or I are the ones who do bed and bath time with them most nights, but sometimes it’s a babysitter or a grandparent who gets them to sleep.

Does this mean they’ll become addicted to sugar and television? Nope. It does mean that they’ll learn that everything is okay in moderation. They’ll appreciate my way of bathing them and putting them to bed, and they’ll understand that other ways are cool too.