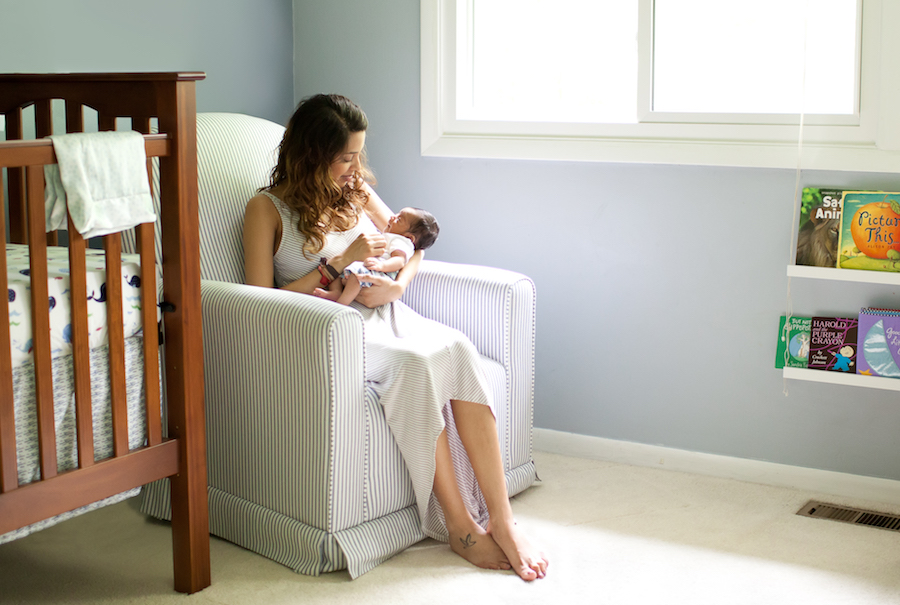 Before you have children of your own, it’s easy to plan out exactly what your life will be like with a baby – adorable, stylish outfits, globe-trotting with a super flexible and adaptable babe, going to restaurants and sharing delicious meals, rocking them sweetly by their bedside.

Let’s face it, we really know nothing about babies before having our own. But, the transition into parenthood can be truly jolting for those caring for a high-needs (read: fussy) baby. I know, because I had one.

Their persistent and demanding nature will eventually benefit them (and all of us) but often leaves their parents exhausted and overwhelmed (read: me).

Babies are hard, and they all have a lot of needs. A lot of babies are often high-needs in one area, like breastfeeding or sleep. Then, there are high-needs babies. These babies are often high-needs in every area. They do not want to sleep. At all. They need lots of stimulation (but are also super-sensitive to overstimulation) and often need to nurse frequently or have feeding issues. They constantly need to be held, and most need lots of movement and will refuse to just sit still. They are also bright, particular, and discerning. Their persistent and demanding nature will eventually benefit them (and all of us) but often leaves their parents exhausted and overwhelmed (read: me).

When I think back to my oldest child’s babyhood, what I remember most is endlessly walking, bouncing, and soothing him to no avail. I remember feeling so lost – is he hungry, tired, wet, hurt? I had no idea what was wrong or how to help. I remember feeling like a bad mother. I’d constantly ask myself, “Why is my baby so different? Why is he not like any of my friends’ babies? They sleep through the night. They’re happy being held by anyone. They play quietly by themselves. My friends don’t seem as tired as I am. What am I doing wrong?”

And though I knew he was a “spirited” kid from the beginning, I didn’t realize just how different my newborn experience was from most until I had my second. Then, it all made sense.

My foray into motherhood was unlike most of my friends, and I often felt so isolated and alone. Looking back, the entire experience was transformative to me – I grew so much as a mother during that time, and I know that a lot of what I learned then I wouldn’t otherwise know.

Making these mindset shifts not only brought me through those hard early months but also shifted my entire parenting perspective for the better. And, though I still have a lot to learn, I know these things that I learned five years ago are what make me a better parent to him today.

1. They are who they are

When I started to understand that my job as a mother was not to raise my baby in the way that I thought was best but to understand him, get to know him, and then raise him to be his best, everything changed.

Not being able to satisfy a baby’s needs is very frustrating for parents of high-needs babies. It seems like a direct attack on your abilities. After all, isn’t a sweet, peaceful baby the product of effective mothering? Actually, no.

There were days when I nursed, rocked, walked, drove, wore, and tried every comforting technique I’d ever read or googled, and nothing worked. Don’t take this as a sign of failure. You do the best you can.

They need time to learn, too.

2. Relentlessness is not bad

High-needs babies are relentless. Their cries are not requests, but urgent demands. They put more energy into everything they do. They cry loudly, protest forcefully, rarely give up. They feel deeply, react powerfully, and are sensitive to everything.

Yes, as a parent, this is hard to deal with on a daily basis, but this restlessness is not a negative trait. Relentlessness, if nurtured appropriately, has the potential to be a catalyst for greatness. Some of the most creative, world-changing people were at one time or another labeled hyperactive, relentless children.

Being demanding is the trait of high-needs children that is most likely to drive parents absolutely crazy, but it is also the trait that drives children to succeed and excel. A high-needs child with a corresponding demanding personality will, if nurtured appropriately during their younger years, exhaust everyone around them. From that, they will learn how to extract from their surroundings. This is why it is so important not to try to influence an infant’s expressiveness. The ability to know one’s needs and be able to comfortably express them is a valuable tool for success later in life.

3. They don’t drain you, you give to them

High-needs babies are exhausting, there’s no other way to spin it. They are always either over- or under-stimulated, don’t sleep well, and always need something. They extract every bit of energy from you as a tired parent, and always want more. It can feel draining, and it was, until I switched my perspective.

No, I didn’t get any less tired, but knowing I was helping him thrive by constantly giving my energy to keep up with his energy definitely helped keep me going during those intense, high-maintenance months.

As high-needs babies grow, their acute sensitivity will become a rewarding asset to be able to parents. They are constantly aware of everything going on around them, and this awareness stimulates curiosity, which stimulates learning. They become kids who notice things, see everything, and care.

High-needs babies are relentless. Their cries are not requests, but urgent demands. They put more energy into everything they do. They cry loudly, protest forcefully, rarely give up. They feel deeply, react powerfully, and are sensitive to everything.

4. Everything else can wait

Because of my sweet first-born, I started to learn the important lesson of letting things go. I am someone who likes following a plan, checking things off the to-do list, and getting things done. A lot of my frustration during my son’s babyhood stemmed from not being able to do any of these things. I felt out of control and useless like I couldn’t manage the way everyone else could. But, the truth is that my baby was different and needed different things from me.

High-needs babies take so much from you that there isn’t always much left behind. The constant holding, feeding, and comforting leave little energy left over for any sort of self-care. I felt like I was mothering in the Twilight Zone – everything was fuzzy and unclear from consistent sleep-deprivation and zero alone time. I functioned in low gear for what felt like a really long time.

But, it’s a season. It passes, just like everything else. Instead of constantly pitying myself for not getting enough done, I started to lower my expectations. I had a baby who needed me – that had to come first. Other tasks could wait (or, be half-assed), but he couldn’t.

Of course, many baby books hard on not “spoiling” the baby with constant holding and rocking, that self-soothing is an important (and it is!) skill for babies to learn. But, every baby is different and many high-needs babies are not able to self-soothe.

High need babies need help to fall asleep. They must learn to trust their parents to help them. This will help them learn to relax on their own, a skill that has value for a lifetime.

Responding to his cries and meeting his needs as best as I could, this was how I could build trust and show him that he was safe and loved. Because I was there when he woke, he would know that I would always be there when he needed. He might not ever know how life-altering it all was for me, but he would be a healthy, stable human because of it.

Our relationships with our children are just that – relationships. And some take a lot more time and nurturing to build than others, but the work is just as important.

With parents who both respond to and shape their demands, the high need child develops into a person with determination, one with confidence and conviction. I see that now, five years later, as we take in slight glimpses of who our son will one day be if we continue to build our relationship with him through trust and understanding.

My son didn’t consistently sleep through the night until he was well over 18 months old. And even after that, we struggled with the crib-to-bed transition, multiple night-wakings each night for multiple days per week, night terrors and nightmares, nightly struggles over bedtime, and early morning wakings. I. Was. Beyond. Exhausted.

I thought I would never sleep again. On top of that, I worried day and night about how this inability to sleep was affecting my son’s growth and developmental. We tried sleep consultants, many attempts at sleep training, visits to pediatric neuropsychologists, and anything else that was suggested to us. Nothing worked. He was just different.

A lot, as I learned, had to do with the way he’s wired.

High-needs babies are acutely aware of the goings-on in their environment. They’re easily bothered, quickly stimulated, and super sensitive. You often feel like you have to walk on eggshells around them. They startle easily during the day and settle with difficulty at night. While you can carry on normal family life without waking most sleeping infants, these babies often awaken at the slightest noise.

Our lives quickly revolved around our little one’s sleep cycles, and though it stung when friends and relatives asked why we couldn’t loosen up or let things be or stay out later like others’ kids, we knew that we were doing what our particular baby needed.

Not many moms have it all that easy, but when you’re the mother of a high-needs baby, it really feels as though everyone has it easier than you do. With every friend you speak to, you cry that little bit more because nap times, mealtimes, nighttimes, and the rest of the time just seem that little bit easier, that little bit more routine for them than it is for you.

You cry because you feel trapped, like you can’t go anywhere or do anything without your child dissolving into a fit of discomfort. You walk and rock aimless, staring out the window, wondering if you’ll ever re-join society.

You will. And when you emerge, you will be wowed at the comfortable, confident, insatiably curious little person by your side.