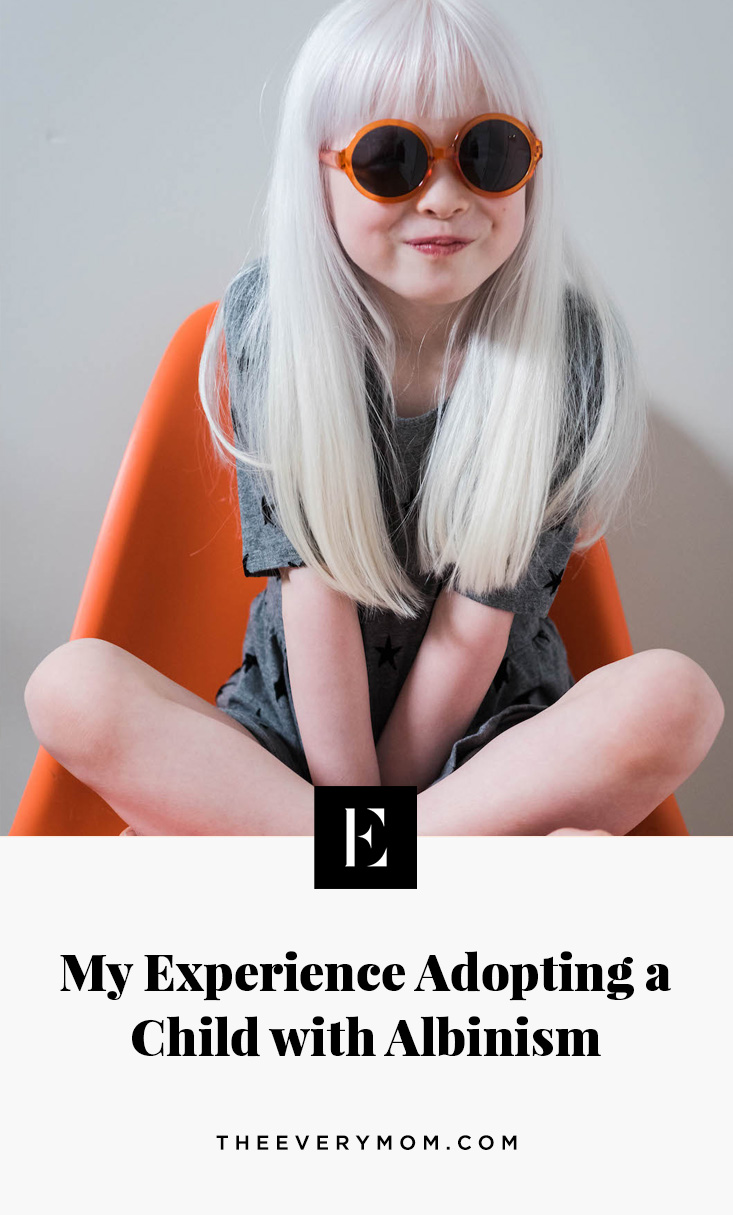 Shortly after returning from China with our first daughter, Chen Chen, we knew we would return to adopt. Three years later, we started the process once again. We attended training, filled out countless forms, gathered all of the necessary documents like birth and marriage certificates, and were interviewed by our social worker several times. As a reprieve from filling out the piles and piles of paperwork, I would sneak in some time in the evenings to start making a list of names for our new little one. After spending more time than I care to admit looking at baby name lists, a name jumped out at me that I instantly fell in love with: Finley.

We were open to being matched with a boy or girl and I loved that it was a name that would work for both. I was surprised to learn that Finley means “fair-haired hero”. Obviously, that name was not a good fit for the dark-haired little Chinese boy or girl that would be joining our family! Yes, albinism was on a long less of special needs we were open to, but what were the odds?

Fast forward a few months and we received an email asking if we would like to review the file of a little girl who was about to turn 4 years old. Our answer was an immediate, “Yes!” and a few minutes later I opened an email and there she was, a beautiful little white (!) haired girl from Inner Mongolia.

We had found our fair-haired hero. We immediately said yes. 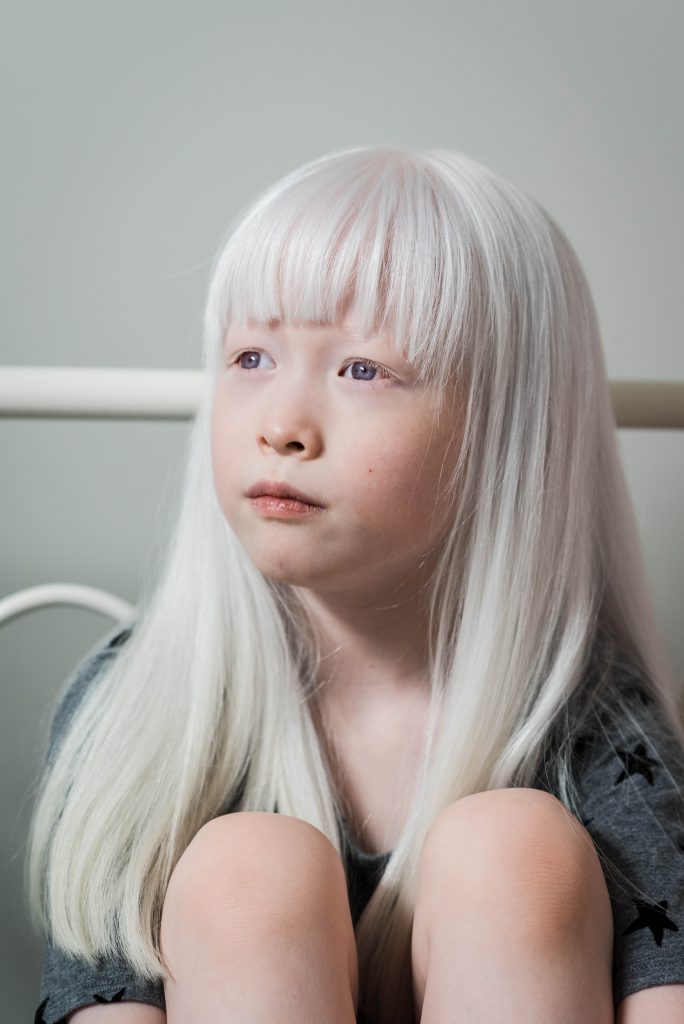 After our first adoption from China, we found ourselves better educated and open to more special needs than the first time around. One of the needs we added to our medical needs checklist the second time around was albinism. Admittedly, during our first adoption, we were not 100% comfortable with albinism as a special need. Concerns surrounding low vision, the increased possibility for institutional delays due to neglect, and the fear of our child being singled out and teased for his or her appearance kept us from adding it the first time around.

During the three years between our first and second adoption, I was able to network online with many adoptive families. One, in particular, the Tracy family, had a daughter from the same province as our first daughter and then went on to adopt two children with albinism. They shared resources, struggles, and successes and were able to give us a view as to what daily life would look like with a child with albinism.

And you know what? It wasn’t that much different than that of any other child.

As with any special needs adoption, there were many unknowns. We wouldn’t know the extent of her low vision before meeting her (albinism affects the hair, skin, and eyes, and most people with albinism fall in the legally blind category). We wouldn’t know if she was delayed (unfortunately, children with albinism can come home very delayed due to low vision and/or developmental neglect resulting from the stigma of their special needs) before meeting her.

We did know 100% that she was our daughter. We were committed to accepting the unknowns, even unknowns that were not exclusive to albinism. We had faced unknowns with our first daughter, Chen Chen, as well.

On a blistering cold winter’s night in late November 2015, in the lobby of a Sheraton Hotel in Hohhot, Inner Mongolia, we met a developmentally-on-target four-and-a-half-year-old who ran into our arms and immediately called us “mama” and “baba”. She compensated amazingly well for her low vision thanks to the opportunities provided to her in her foster home in Beijing. That first night she was running up and down the stairs in the hotel lobby without assistance.

She was a happy, healthy, talkative (oh so talkative!) little girl, and she was simply amazing.

Yes, our time in China was rough at times. And yes, the first few months home were hard due to language loss and acquisition and continued grieving for all that she had left behind, but non of those are exclusive to albinism. That is the face of adoption: grieving due to the multiple losses, and should be prepared for in any adoption.

Once home, our daily life with a child with albinism became something we were able to adapt to easily. Sunhats, sunglasses, and sunscreen are always with us. We developed a daily routine of sunscreen application, and we made just a few small modifications around the house. We purchased a lower TV stand so Finley can get close enough to see, and we repositioned where we sat at the dining table so that the sun wouldn’t be in her eyes when we ate.

Appointments were made at the pediatrician, dermatologist, ophthalmologist, and dentist. She received a clean bill of health, had two small cavities, and her dermatologist had no concerns. Going forward, we were told we would meet with her ophthalmologist twice a year and her dermatologist once a year. She received prescription glasses for astigmatism (non-related to albinism), which she took to quickly. The low vision associated with albinism is not correctable with glasses or surgery and is non-degenerative so what vision she has is what she will continue to have. 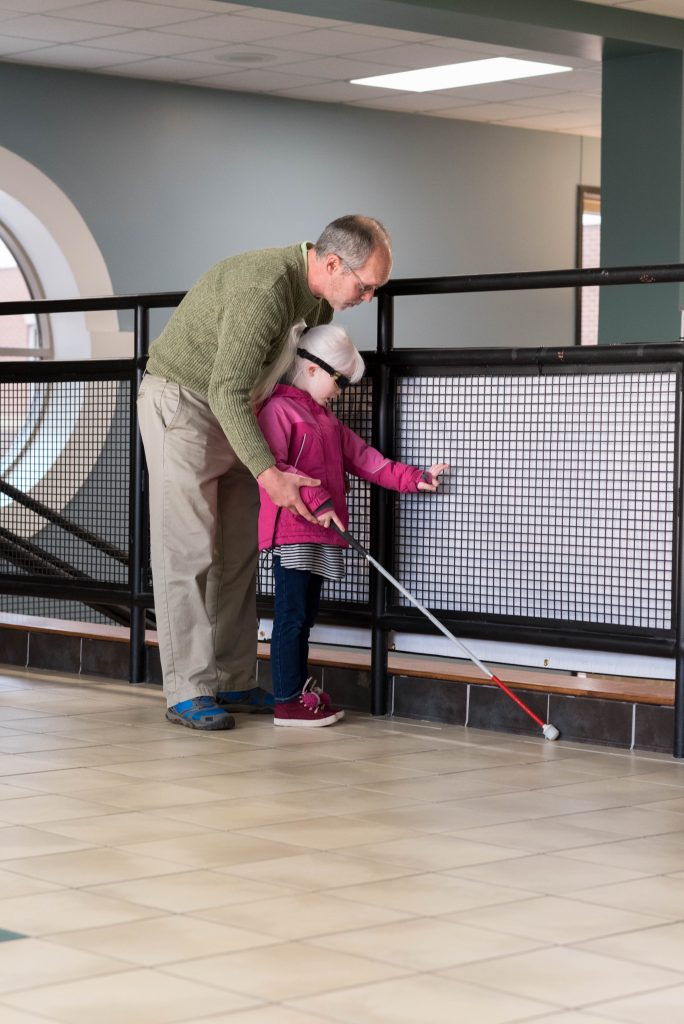 In preparing to bring our first daughter home from China, we received lots of training on how to adapt to being a conspicuous family. In all honesty, we never really felt conspicuous until we came home with a child with albinism. We get comments and attention everywhere we go about her very white-blonde hair and her sunglasses. We hear people exclaim “look at the little rockstar!” almost every time we leave the house, as people do not realize that her sunglasses are medically necessary due to her photophobia (sensitivity to light).

Most people have never met with someone with albinism, and because she doesn’t meet the stereotype (people with albinism do not have pink eyes, Finley’s are a beautiful blue-lavender), they ask a lot of questions. When we first came home, I felt like I needed to take the time to stop and answer every question. I quickly realized this was not necessary, and it made Finley uncomfortable, so we simply smile and move on. Now, I carry cards with me that have a brief explanation of what albinism is and isn’t which I occasionally hand out.

When Finley first came home, she wasn’t as aware of the attention that her appearance brings, but as she is getting older the attention is starting to make her more uncomfortable. When people approach she will defensively say, “Let me guess, you are going to say something about my hair,” and has recently expressed that she wishes she had dark hair like her sister. Those fears I once had about her being teased and picked on creep back up every so often. We empathize with her when she expresses concerns about the attention she draws and remind her just how perfect she is. We let her know she will always stand out in a crowd but that can be a good thing and to make the most of it!

People with albinism grow up and go to college (there is no link between albinism and intellectual delays. Finley is in first grade and is reading at almost a third grade level!), get married, are successful at their chosen professions, and have children (with and without albinism, albinism is the result of both parents being carriers of the same recessive gene). In the U.S., approximately 1 in 18,000 to 20,000 people has some type of albinism. In other parts of the world, the occurrence can be as high as 1 in 3,000.

Because of her low vision, Finley easily qualified for an IEP (Individualized Education Program). In the classroom, she has the support of a TVI (Teacher of the Visually Impaired) and her IEP ensures she has accommodations such as seating away from windows, the ability to wear her hat and sunglasses at school if needed, and seating at the front of the classroom. A note from her pediatrician is on file at the school stating she needs to have sunscreen applied before going outside. Her TVI also works with her on using different tools such as handheld magnifiers and her monocular,  an optical instrument used to view distant objects with one eye, as well as accessibility features on her tablet and computer. Finley is in first grade this year, and we recently added O&M (orientation and mobility) to her IEP. Her TVI works with her once a week off-campus on cane training. Although Finley compensates amazingly well for her low vision, when it is very sunny outside she has had some instances of tripping and running into objects because she cannot see them. O&M will ensure she can safely maneuver her environment through not only the use of a cane when needed, but it also trains her on auditory clues and non-cane techniques when walking. 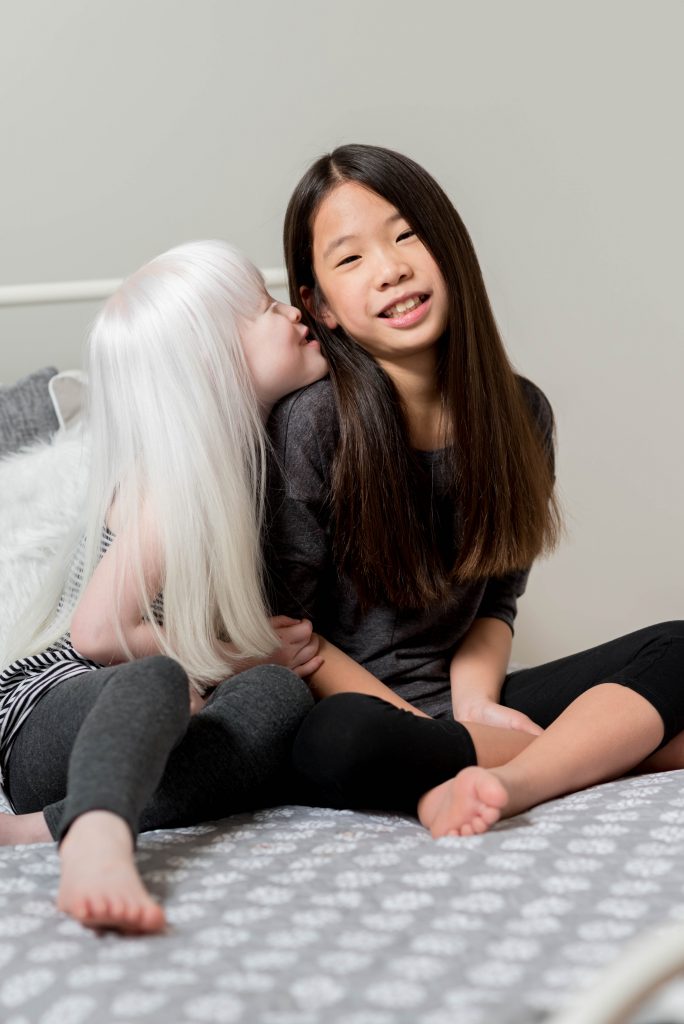 Had I read that last paragraph 3.5 years ago before bringing Finley home, it would have felt like I was reading something written in a foreign language! Thanks to other adoptive families who have brought children with albinism home, and the albinism community, (specifically NOAH, The National Organization for Albinism and Hypopigmentation) there were many resources available to us any time questions arose during our wait and after we came home. Questions like how long can she stay in the sun, does she always need to wear her sunglasses, will her hair turn green in the pool (it doesn’t), what is the best sunscreen to use. Networking with local families who have children with albinism has been crucial. Hearing Finley excitedly talk about her friends and say, “They have albinism like me!” makes you realize just how important these connections are. This summer we are attending a national albinism conference in Kansas City and cannot wait to make even more face-to-face connections, especially with those within the adoption community. To have albinism and be a transracial adoptee adds another layer of complexity to her life and we are hoping these connections will help her support her in navigating that.

If you would like to learn more about albinism, I encourage you to visit NOAH’s website. Even though our family is now complete, I am still passionate about educating and supporting potential adoptive parents and am always open to questions. Feel free to DM me over on my Instagram account, @marthabonneau.