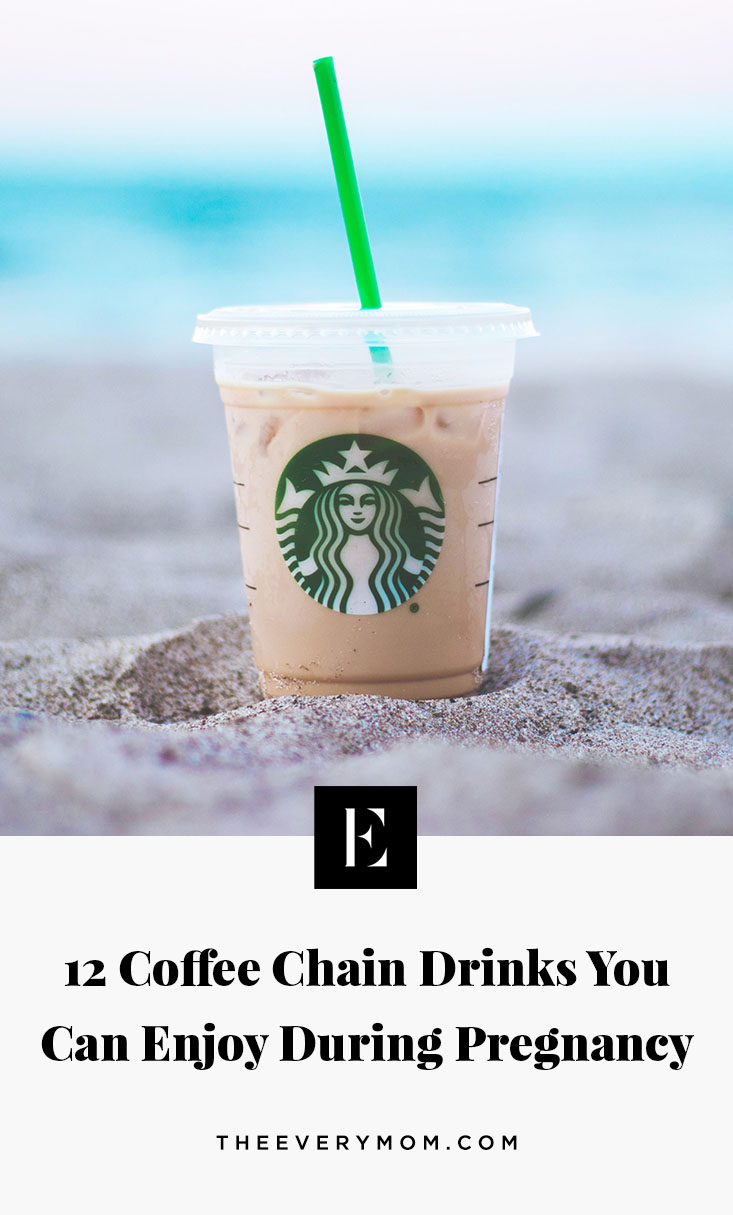 There are a lot of things you have to give up during pregnancy. While you may be saying, “see you later” to your dearest wine, soft cheeses, and sushi, thankfully you can still indulge in a mini caffeine fix, even during pregnancy.

There are mixed opinions on how much caffeine is safe during pregnancy. Some claim up to four cups a day, while other sources recommend cutting it out completely. Based on various studies, the American Pregnancy Association recommends limiting caffeine intake to less than 200 mg a day and notes that this is equivalent to about one 12 oz cup of coffee. However, caffeine content varies significantly based on the type of coffee drink and where you get it. It can be a bit confusing to know what is safe and what is best avoided.

Don’t let this uncertainty keep you from your daily coffee or tea. During pregnancy, getting a good night’s sleep can be a challenge, so you’re likely more tired than usual. And if you’re pregnant and also have a toddler, we know you will probably want every single milligram of that 200 mg you’re allotted each day.

Remember there is caffeine in things besides coffee. Yes, coffee-flavored ice cream contains caffeine, as does chocolate and some teas. Keep this in mind when calculating your daily caffeine intake. If you’re concerned about caffeine content when getting a drink out, consider ordering the smallest size available, sticking to one or max two shots of espresso per drink, or order your drink half-caffeinated.

Since there is such a wide range of caffeine content across coffee shops, we’re sharing 12 drinks you can order at your favorite coffee chains while pregnant, and approximately how much caffeine is in each drink. 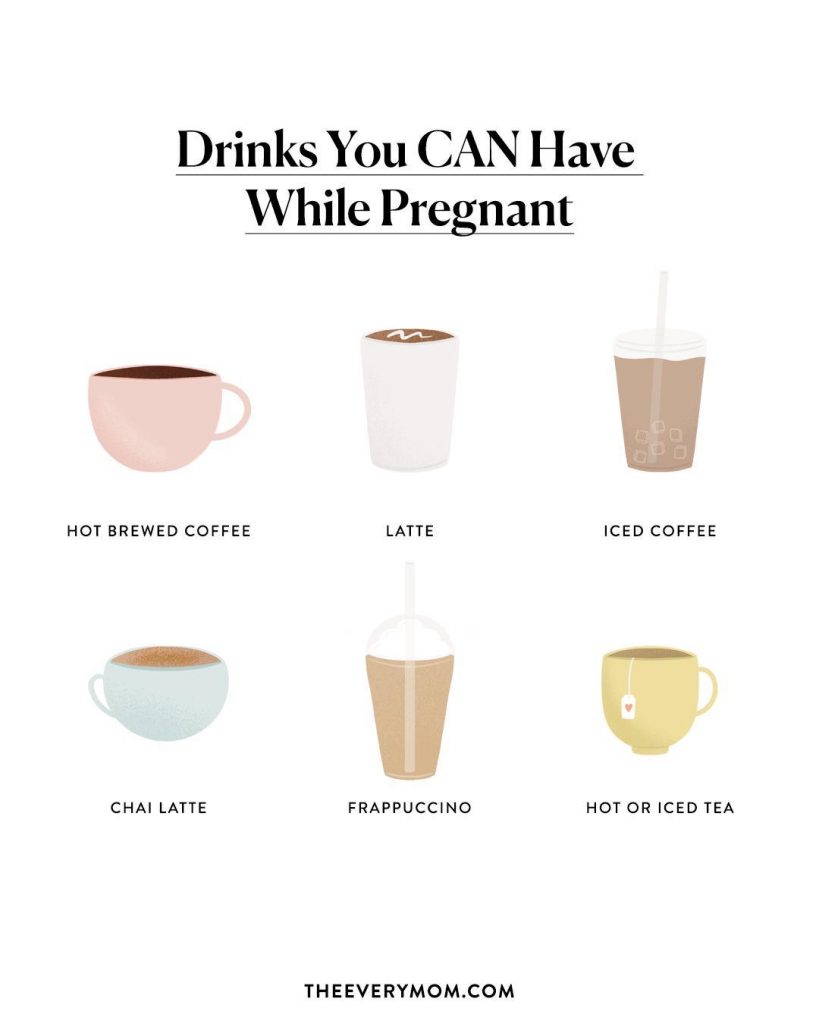 Even your basic cup of drip coffee can have a wide range of caffeine depending on where you get it from. At Starbucks, go for a Short (Blonde Roast has 180 mg and Pike Place has 155 mg), at McDonald’s McCafe you can go for a medium at only 145 mg, and at Tim Hortons, a medium has 205 mg. Both Caribou and Peet’s go further over the 200 mg limit, with a small at Caribou containing 230 mg and a 16 oz cup at Peet’s containing 267 mg.

If you’d prefer a larger drink to sip on, order a Cafe Misto at Starbucks, which is half brewed coffee and half steamed milk. A Venti has 195 mg of caffeine, keeping you just under that 200 mg limit.

Made of espresso and steamed milk, lattes are an easy order since you can customize how many shots of espresso you’d like. At Starbucks, a Tall contains 75 mg and a Grande has 150 mg (it’s not currently pumpkin spice season, but for future reference, Pumpkin Spice Lattes at Starbucks contain those same amounts). At Tim Hortons, a medium contains 205 mg, at Dunkin’ a medium has 151 mg, and at McCafe, a large contains 178 mg.

A macchiato is a similar option, just with less milk than a latte. A double from Starbucks has 150 mg of caffeine and a small from Dunkin’ has 237 mg, which takes you slightly over the 200 mg recommendation.

Another delicious option is a cappuccino, which contains an even amount of espresso, steamed milk, and foamed milk. A Grande at Starbucks contains 150 mg of caffeine, a medium at Dunkin’ has 166 mg, a large at McCafe has 178 mg, a medium at Tim Hortons has 205 mg, and a small at Caribou has 180 mg.

For a watered-down espresso option, order an Americano, which is a mix of espresso and hot water. You can specify how many shots of espresso you’d like in your drink. A Grande at Starbucks contains 150 mg, a large at McCafe has 178 mg, a medium at Tim Hortons has 205 mg, and a small at Caribou has 180 mg.

If you want to keep it pretty basic with a quick jolt of caffeine, order a straight shot of espresso. At Starbucks a shot has 75 mg, one at Dunkin’ has 98 mg, and one at McCafe has 71 mg. According to the USDA, a standard shot of espresso contains 64 mg of caffeine, so if all shots are somewhere around that number, you can actually have two for those days when you really need an energy fix.

If you like a warm drink but want a lighter amount of caffeine, hot tea lattes are an excellent choice. A Venti Chai Latte at Starbucks contains 120 mg of caffeine and a large Vanilla Chai at Dunkin’ contains 107 mg.

If you prefer your coffee in something closer to dessert form, order a Frappuccino or other blended coffee. There are a lot of flavors, but the standard Coffee Frappuccino from Starbucks comes in well under 200mg, with a Venti containing around 125 mg of caffeine. A large Mocha Frappe at McCafe has 180mg.

Teas can be refreshing, hydrating, and even soothing for some pregnancy symptoms. Consider ginger tea if you’re experiencing nausea or morning sickness, peppermint to aid with digestion, or red raspberry leaf tea which is said to support the uterus and can help the body prepare for labor. Keep in mind that many teas do contain caffeine, though usually much less than coffee options. A cup of caffeinated tea usually contains somewhere around 40-80 mg of caffeine. Some herbal teas and hibiscus tea are not recommended during pregnancy.

And finally, if you’re trying to cut even further back on your caffeine intake, go for a half-caf or decaf coffee. If you love the taste of coffee or simply the ritual of it, you’ll still get those vibes, just with way less caffeine. A decaf cup of coffee usually contains around 15 mg of caffeine. 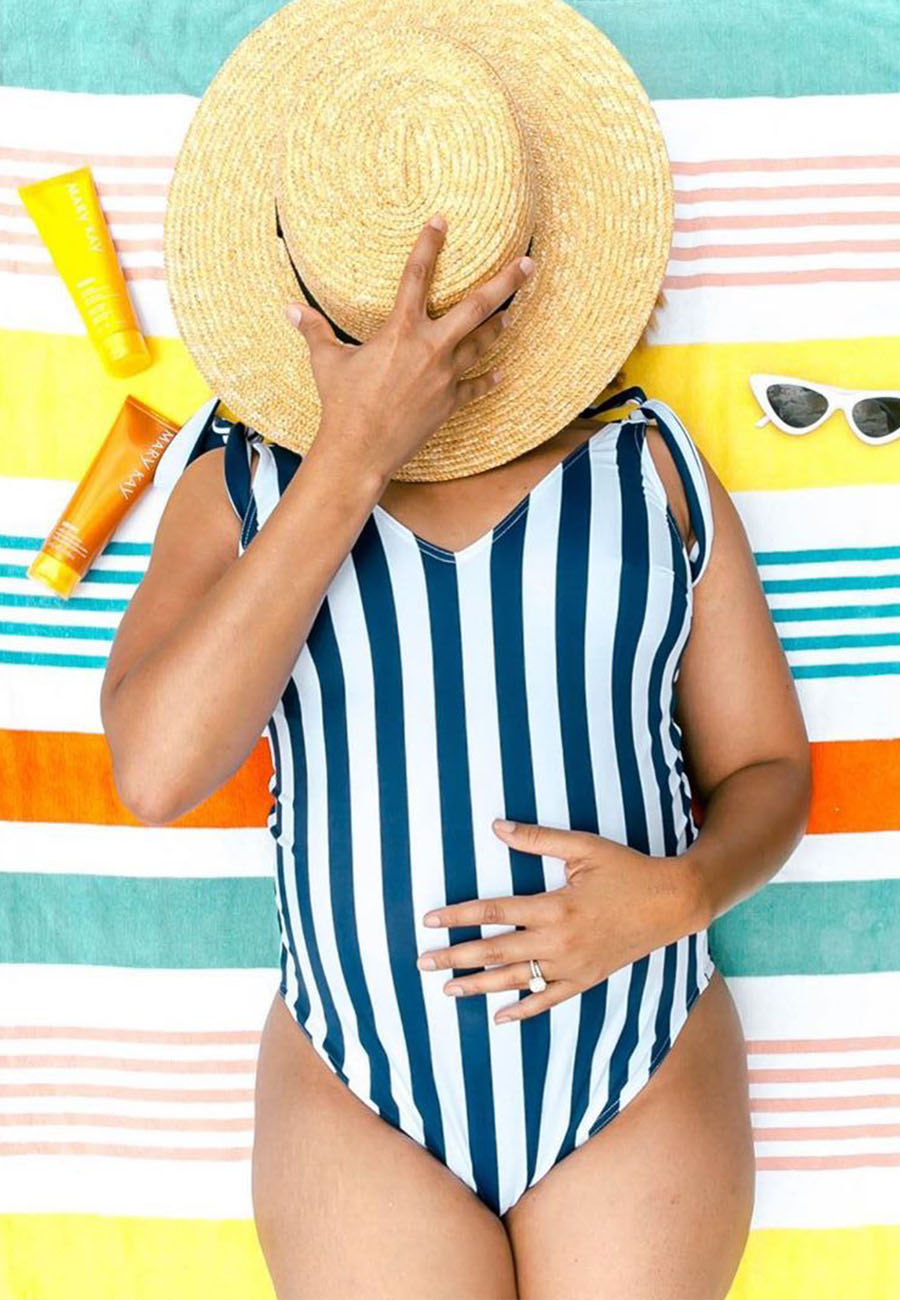