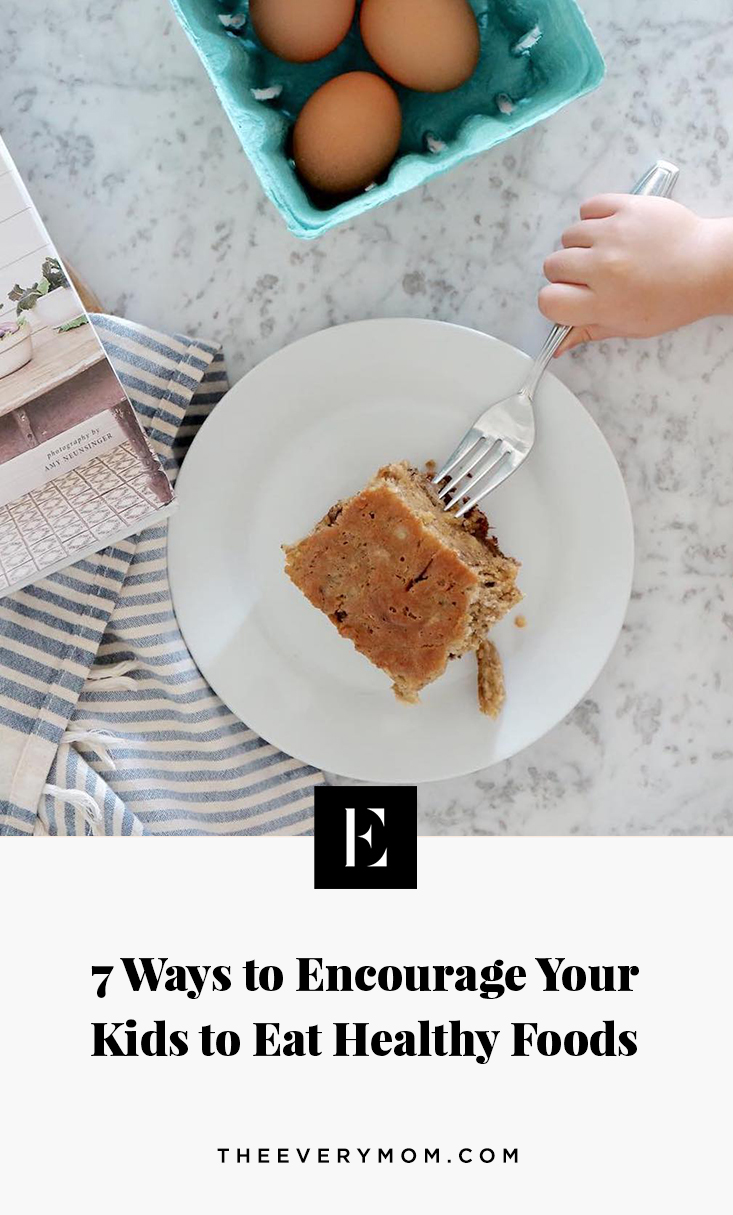 As a parent, teaching your kids how to eat healthily can be frustrating, especially when they will only eat macaroni and cheese, or all of a sudden hate their favorite foods, or refuse to eat anything at all some days. But it’s normal for children to exercise independence through food choices, and your job is to provide healthy options and model good habits. So take a deep breath, be patient with the process, and rely on these seven expert-approved ways to encourage healthy eating in the meantime.

1. Watch for hidden sugar in snacks.

I wouldn’t call myself an overly restrictive parent when it comes to treats for my two-year-old, but I do try to keep a running mental tally of sugar intake — primarily because almost all snacks for kids are high in calories and sugar. Take juice: it sounds “healthy,” but it’s not, and I often find myself fighting the apple juice v. water battle with grandparents who insist a little juice never hurt anybody. (Sigh.) It’s not that I want my son to never ever enjoy juice; I just want to build a habit of water as the go-to, default beverage instead. Another suggestion from pediatric registered dietitian Lara Field? Swap juice for fresh fruit, and rotate the variety.

The same is true for snacks: most are incredibly high in calories and sugar. Parents tend to give in to convenience at snack time, but Laura Hoover, a Chicago-based registered dietitian nutritionist and founder of Smart Eating for Kids, says this is when you can capitalize on the fact that your kids are hungry, because they’re more likely to try new or healthier foods outside of full meal situations.

In general, prioritize snacks low in sugar like fruits and vegetables and fiber-packed whole grains, says Amy Gorin, MS, RDN, owner of Amy Gorin Nutrition in the New York City area. “We often think of granola bars as healthy, and some are,” continues Gorin. “But you can just as easily pick up a bar loaded with sugar — some bars have 13 grams of sugar! Some yogurts have a lot of added sugar, but you can naturally sweeten plain yogurt by adding fruit or even adding a sprinkling of cinnamon.”

“There are so many snacks on the market that are targeted to kids, and many of them are loaded with added sugar and sodium, so parents need to really read ingredient lists when they make decisions at the store,” adds registered dietitian Frances Largeman Roth, a mom of three and author of Eating In Color. “Look for snack products that list whole grains as the number one ingredient and have minimal added sugar.”

2. Add veggies whenever possible, get creative, and focus on texture.

“If you shop smart and in season, or grow veggies yourself, you’re much more apt to get your kids to eat them,” advises celebrity chef Devin Alexander, author of The Biggest Loser cookbook series. “Also, be sure to educate your children on what these great foods will do for you: “Popeye is super strong because he eats spinach. Do you want to be strong too?” And if they don’t like cooked veggies, let them try them raw.”

I already use this technique with my toddler, and it works because it piques his curiosity. As he’s gotten older, I spent a lot of time talking about why I’m eating certain foods, and because he likes to mimic what my husband and I are doing, he’s more game to try a bite of items like smoothies or veggies and hummus. Experts also suggest swapping certain foods and drink for healthier options, just to continue to show a range of textures and flavors to your kiddos.

Here’s a few to get started: 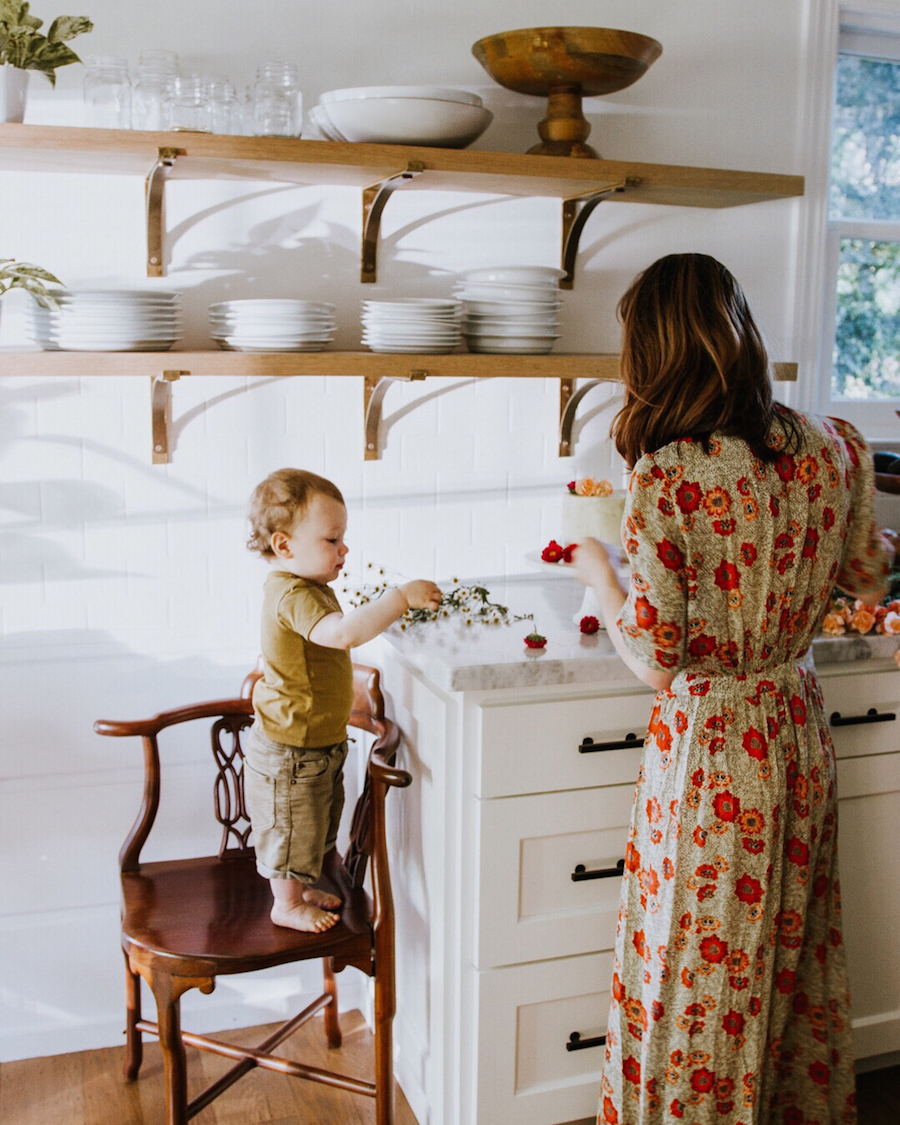 3. Include them in the cooking process.

Once your kid gets old enough, including them in the cooking process can be a great way to get them interested in healthy food. A couple weeks ago, for instance, I asked my son if he wanted to “help” me cut up a watermelon, and his eyes lit up. Again, he’s two, so obviously his “help” pretty much meant making a mess and eating bites out of the rind with a spoon, but now every time he sees me at the counter, he wants to “help.”

Experts say this is key, even if your children aren’t interested in eating the food prepared later on. You can check out children’s cookbooks and put them “in charge” of deciding what’s for dinner, or give them little (and safe!) tasks and to-dos while you’re cooking. Or, ask them to pick out what they want at the grocery store, within reason — i.e., “We need to pick out a veggie for dinner, what one do you want?” can go a long way.

READ: The Importance of Cooking Cultural Dishes for Your Children

The meal doesn’t have to be complicated, either. “Cooking together — even really simple things — can go a long way toward getting little ones interested in healthy ingredients and eating them,” says Roth. “Backyard gardens, farmer’s markets, and joining a CSA are all fun ways to get kids excited about fruits and veggies. We live in Brooklyn and don’t have an actual garden, but we’re growing strawberries in a pot and watermelon radishes in a container — it’s a reason for the kids to run outside after school. They love seeing their plants grow.”

4. Enjoy treats and dessert in moderation, without guilt.

Real talk: it’s hard to convince your kids that dessert should be enjoyed in moderation if you’re not practicing what you preach, so this is where role modeling matters. My son already knows that on the weekends, we usually have ice cream, but it’s not an option during the week; similarly, we (meaning all of us!) eat our dinner before we get to enjoy a treat. Otherwise, he asks for the treat, first — duh, why wouldn’t he?

“Treats like ice cream, cake, and cookies are part of what makes life enjoyable, for both kids and adults,” says Roth. “The key to balancing it out is to make sure to set up some guidelines around when kids can have treats. Treats don’t need to derail healthy eating— but they’re exactly that — treats — not a main part of the diet.”

Nutritionist Vanessa Rissetto doesn’t police her kids at birthday parties; she lets them have all the cake, juice, and candy they want because she knows at home, sweets are a once-in-a-while treat. And Alexander discourages using food or treats as a reward: “‘Be good and I’ll let you have ice cream’ doesn’t send the right message — that said, cake as a celebration is not a problem.”

“It’s healthy to teach the mindset that occasional indulgences are part of a healthy lifestyle,” says Gorin. “One strategy you can use is to keep less sugary sweets in the house. If your family wants ice cream for dessert, for example, make eating it an occasion and take everyone to the ice cream store.”

When we entered the stage of giving our son real food most of the time, I remember asking our pediatrician: “What do we do if he won’t eat ____?” He laughed. “Give him healthy, well-balanced options, and if he won’t eat, don’t stress,” he replied. “He’ll eat when he’s hungry.” In his view, parents often fret about kids not eating, so they go overboard on providing other choices, which sounds okay in theory, but actually emphasizes the pickiness in the long run. Most kids do go through picky eating phases at some point, so just focus on offering variety in the meantime instead of always deferring to chicken nuggets.

“Though the store shelves seem to be flooded with options for toddlers, we hear more and more that kids are selective eaters,” says Field. “Parents today have loads of information at their fingertips: how to be a perfect parent, how to make sure their kids are the best eaters, how to offer foods that may help them score higher on their standardized tests. But with all that information, parents are making a crucial misstep — trying to appeal to their children’s every desire. Parents need to hold the reins and hold them tight. We don’t ever ask our kids when they want to go to bed, right? We can’t ask them what they want to eat either. Parents need to have a plan and stick to it. Get your kids input: do they like food combined or separated? Should Tuesday be pasta night? Do they like condiments with their chicken? Kids can have a say in what they eat, but not at the time of the meal. This is when our picky eaters get even pickier.” 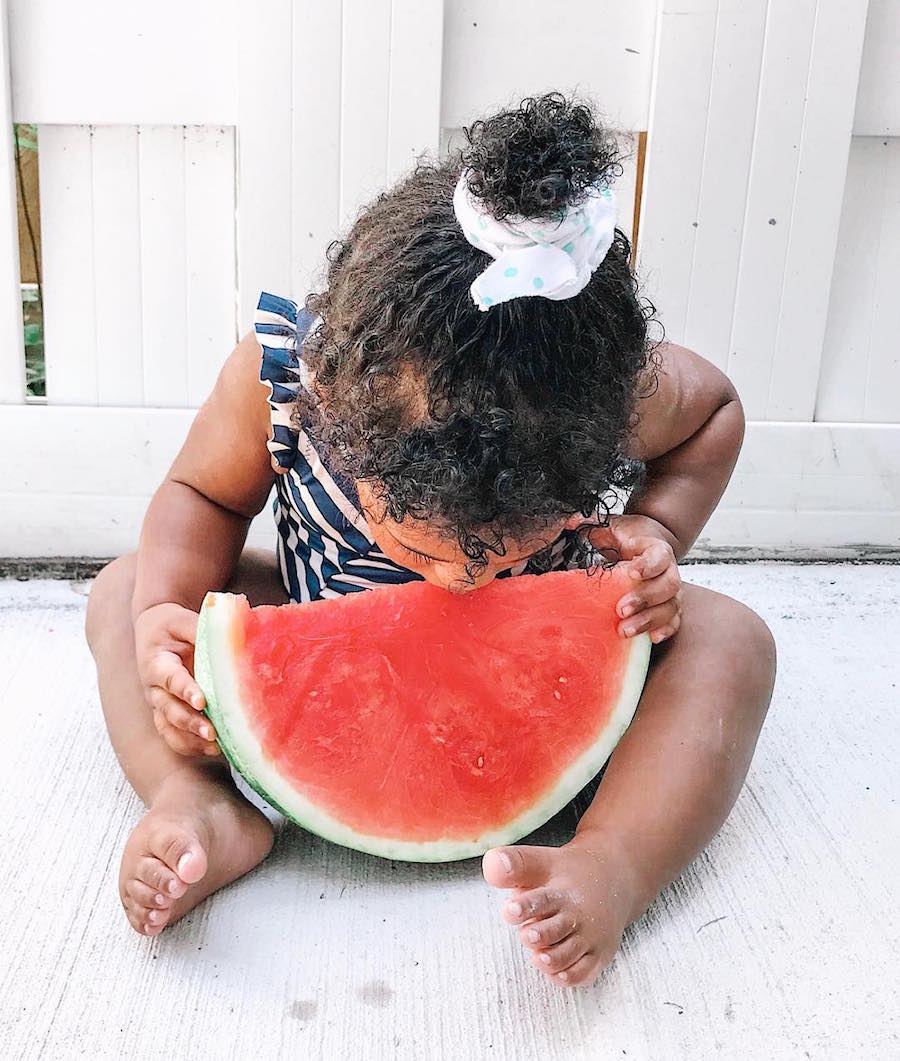 6. Set a good example of what healthy looks like.

Here’s the bottom line: if you’re not trying to be a healthy eater, then your kid probably won’t be, either. It sounds harsh, but you do have to set a good example as an individual and for the family unit, says Roth. Demonstrate that you’re not just asking them to eat the rainbow, because you do it, too: greens, fruit, whole grains, seafood, the whole spectrum, etc.

“Make sure you are healthy and your children will be healthy,” says Dr. S. Daniel Ganjian, a pediatrician at Providence Saint John’s Health Center. “Don’t get excited about unhealthy foods, so your child will not develop a passion for them, either. Rather, speak about how much you love fruits and vegetables, and enjoy their taste, juiciness or crunch.”

7. Be patient, and keep introducing healthy foods over and over again.

For those who have picky eaters at home, hang in there, says Dr. Ganjian. “When trying to introduce a new food, try preparing in different ways (boiled, baked, fried, steamed), different shapes, and different sauces. Give them three foods that you know they like and one food that you want them to try. Tell them they have to leave it on their plate and should just taste it or even lick it. For very picky eaters, start by telling them to such touch the food or bring it to their lips. If they do as you ask, then they get a reward, like a sticker, praise, or hugs.”

Don’t stress over the amount or type of food your child eats, either — just focus on helping your kid build a healthy relationship with food and learn to listen to their bodies. And if you have concerns about your child’s weight, definitely talk to your pediatrician.

“Healthy eating is a journey that takes time to develop,” says Hoover. “Just as kids first learn to crawl, then walk, then run, then climb, they also need time to learn to like new foods. Parents just need to keep on doing their best to offer lots of healthy variety, so that it becomes the ‘norm’ for kids. I think it’s important to remember that even if a child isn’t eating all the foods that a parent serves, kids are still taking it all in and making note of it. It takes time, but eventually, they’ll understand that fruits and vegetables at every meal are a normal thing.”

What healthy eating strategies have worked well for you and your family?