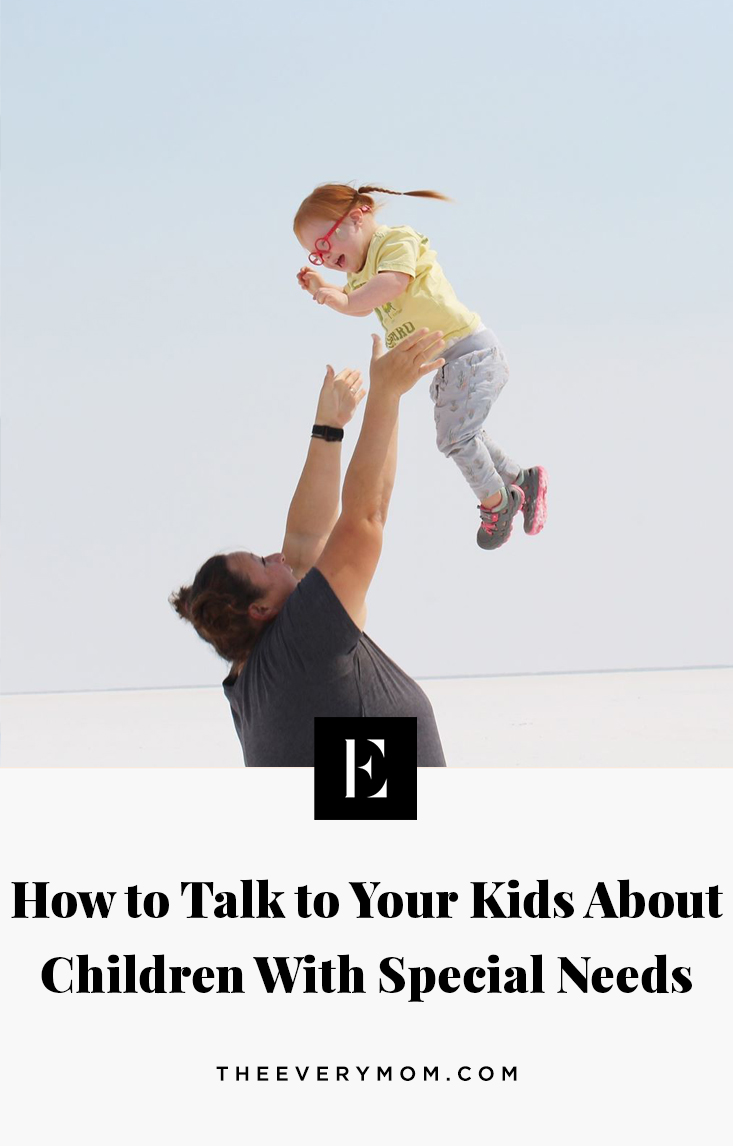 When I was in the hospital with a baby in the NICU, a social worker came and spoke with me regarding the diagnosis of my baby. I had already been prepared to have a baby with Down syndrome during my pregnancy, but I still had a million questions about Down syndrome. The social worker gave me a wonderful book that went through every system of the body to explain all the potential health complications my little girl could experience. It explained development and gave me checklists to take to my pediatrician. It made me feel prepared to leave the hospital with my little newborn, Ruby, and move forward with this diagnosis.

What the book did not prepare me for was how other people would react to Ruby. I learned this the hard way the first time I took her to the store. There were stares from both adults and children. At the time, Ruby had a feeding tube and oxygen tubing in her nose, so I know she looked different. Later, it would be her glasses and the stickers on her face to keep her oxygen tubing in place. Even without the medical equipment, there were still stares and whispers when I would take Ruby to the local pool.

People recognized that she looked different – but I could never be prepared for how they acted with that knowledge.

It hurts when someone asks you “what’s wrong with your child”? In my mind, I don’t think anything is wrong with Ruby, but I understand that for children who are recognizing the differences in the world around them, this is a natural inquisition. I am usually not offended when children ask me questions about my daughter. They are making sense of the differences between people – I have learned that if we use these opportunities of being around differently-abled children in a positive way, we can teach all children to be more compassionate and accepting people.

Here is what I wish all parents would teach their children about mine.

I think this is an obvious one, but it always rings true.

It isn’t polite to stare at anyone, regardless of what their facial features may be, what the medical equipment they may be hooked up to looks like, what the sounds they are making sound like, or even what the color of their skin is. No one likes to feel as if they are on display or in the spotlight in a negative way.

Making eye contact is, however, encouraged. If you are speaking with someone, looking them in the eye, and not at what makes them look different, helps that person feel seen and feel that they are of value. It also helps to break the barrier of hushed whispers and shame that typically surround those with differing abilities, medical differences, or those who are of a different race or social culture.

Don’t be afraid to ask questions

Many times, sweet, little children would ask me about the stickers on Ruby’s face or why she had tubes in her nose. Their questions are always innocent because they genuinely wanted to know about her. I would explain that Ruby needed the tubes to give her oxygen for her heart, or that she had glasses so she could see better.

Teach your children that it’s OK to ask questions — it will help them understand and start a conversation. Starting conversations is how we can get to know one another, and children need to know that it’s always OK to be curious in a well-intended way. If you jump in with a “Ohmygosh, I’m so sorry, I don’t know why she asked that!” you’ll perpetuate the idea of the “other” – that people with differing abilities are separate from you or me – and that’s just not true.

A genuine desire to understand another human being is never a bad thing. 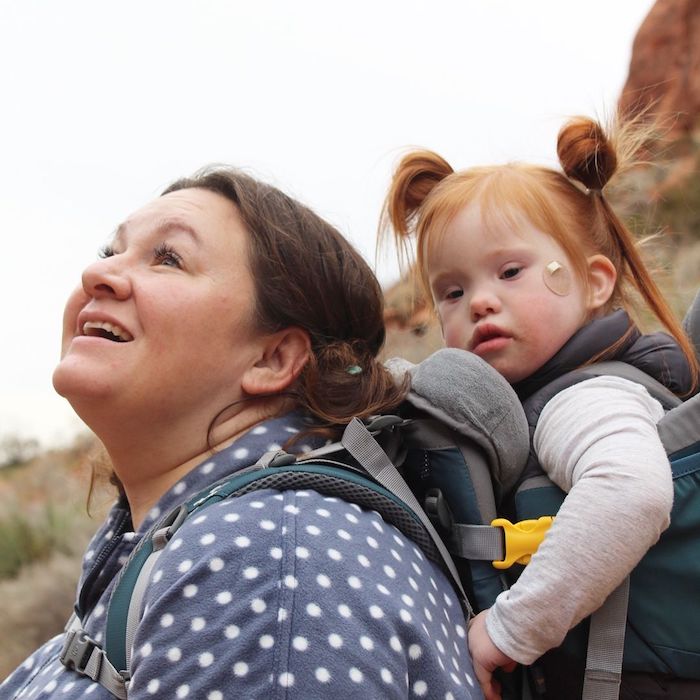 Use proper terminology and people-first language

Please do not make your own modifications of the diagnosis. Generally, people don’t like to be defined by their diagnosis or disability. Don’t say “that Downs kid” or “the blind kid” or “the autistic kid.” Instead, say “the child that has Down syndrome,” or “the child who is blind,” or “the child with autism” – that is, if you have to refer to that part of development at all.

Using people-first language puts most of the emphasis that they are in fact a child, just like everyone else. Yes, there are some things that make them unique, but more than anything, they all want to be “just a kid.” If you don’t know what the proper terminology is, please ask. Most people will not be offended. It is more important to use descriptive words that are accepted by those with differing abilities, instead of other labels that society has imposed on them.

And, though it shouldn’t have to be said, please teach children (and more importantly, all of the adults you know) that derogatory terms, such as the “r” word, are just not acceptable and should be removed from everyone’s vocabulary. It is a word that hurts children and parents alike, and should never be used.

Don’t be afraid to touch them

What my child has is not contagious and by staying away or being afraid to touch her, it only makes her feel more isolated and different. Children should understand that they will not “catch” whatever their new friend has.

That being said, it’s always good practice to ask permission, before you touch anyone. Some children are sensitive to touch and may be bothered by it. Everyone should be taught about boundaries and respecting each others’ bodies. So, teaching children to ask before they do something to be sure that the other person agrees is always a good idea. If a parent is present, they can ask a parent to make sure that their gesture won’t interfere with a child’s medical equipment or agitate them unintentionally.

One thing I have learned in raising a child with Down syndrome is many (like Ruby) don’t have many boundaries, and love hugging everybody! So be prepared to be hugged or have your hand held, because these same children often love to show their happiness and excitement through touch. 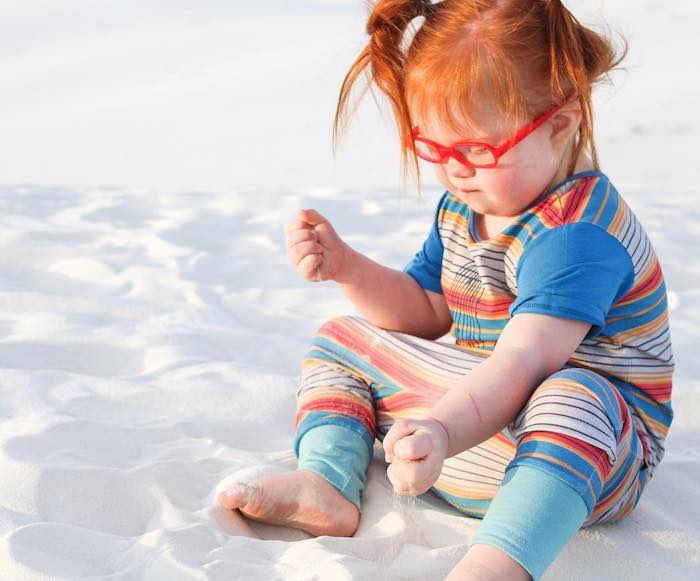 If your child likes Legos, chances are mine does too. If they love Moana and can’t stop singing the songs, chances are mine is singing (or trying to sing) the same song. All children are usually aware of the same toys and movies and games that your children play with. So, if your child thinks that they won’t have anything in common this child, they are probably wrong.

Help them find things they have in common. Remember that even with a diagnosis, children with differing abilities are still children and they long to be treated like everyone else. This is perhaps the most important thing you can teach your child.

If we could all practice these things to every person, imagine the beautiful world we would live in.