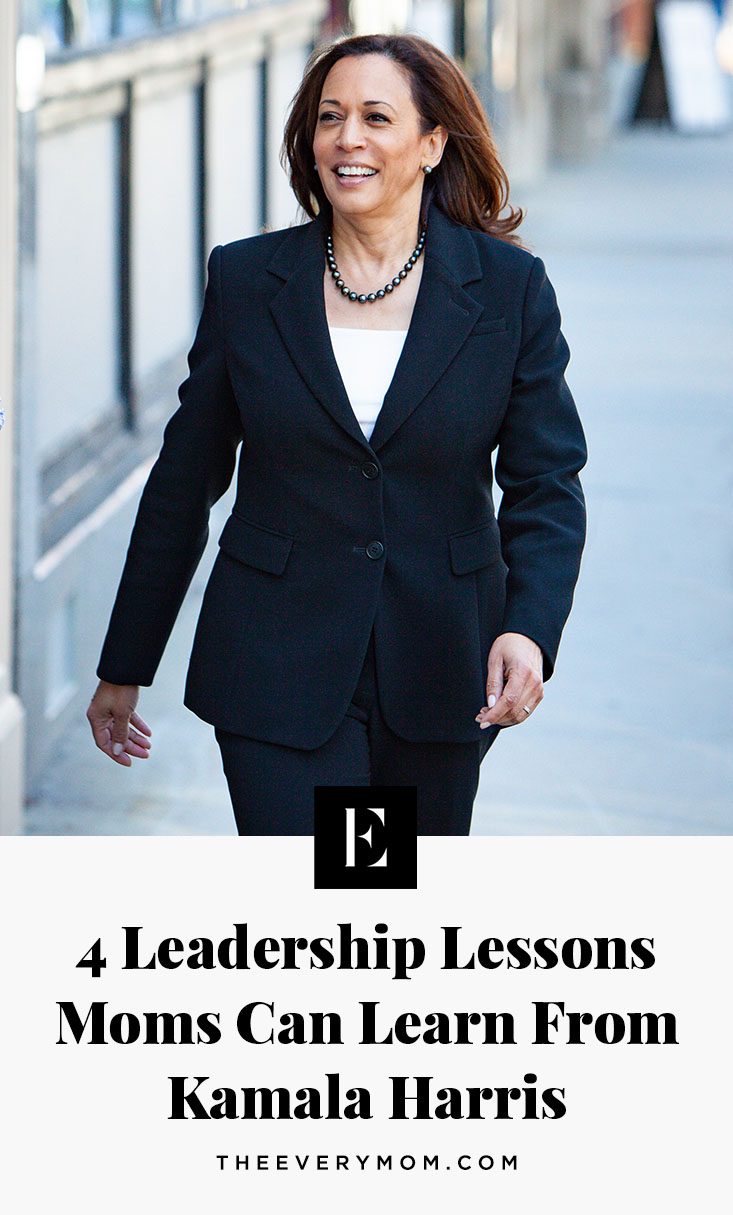 The clock was ticking, and he was blocking the doorway.

The instructor of the leadership course looked incredulous when I told him my friend and I needed to depart early. As I explained our reasons for leaving, he did what most men are socialized to do without thinking: he interrupted. I met his gaze and replied, “I’m not done yet.”

That was over four years ago, well before I became a mother. Yet I remember it clearly—not because I surprised him—but because I regained control of our discussion and walked outside with my head held high.

Which leads me to Senator Kamala Harris (D-Calif.). On the debate stage last Wednesday night, her rebuke, “I’m speaking,” resonated with women across the country, likely jogging their own memories of grappling with patriarchy.

On the debate stage last Wednesday night, her rebuke, “I’m speaking,” resonated with women across the country, likely jogging their own memories of grappling with patriarchy.

The United States Democratic Vice Presidential Nominee had just been interrupted by her debate opponent, Vice President Mike Pence, but she refused to relent. It took Harris a few more interjections until she seized the conversation and delivered her message with poise and grace (had Susan Page moderated better, perhaps Harris wouldn’t have had to repeat herself). Still, for many of us, the moment felt electric. “I’m speaking” went viral, inspiring tweets, a hashtag, and even merchandise.

And Harris, a historic candidate and lawyer who rose in power for her sharp prosecutorial skills, has much to teach about women’s leadership. Not only is she the first Woman of Color to be nominated for national office by a major party, but she was also the second Black woman and first South Asian-American senator in history. She’s also a wife and mom; married to Douglas Emhoff and stepmother to his two children, Cole and Ella. Here are four leadership lessons moms can glean from her.

1. You can be a mom and be ambitious

A stepmother for six years, Harris, 55, knows about the struggle to balance work and motherhood. Known as “Momala” to older stepchildren Cole and Ella, she splits her time between Washington, D.C., and California. Prior to becoming a senator in 2017, she was the state’s attorney general for six years. Though her work is demanding, she’s written about her commitment to showing up for her stepchildren’s sporting events and cooking Sunday family dinners. In that same essay, penned for Elle, Harris recalled a difficult moment in 2017 when she was torn between a work event and motherly duty.

Though her work is demanding, she’s written about her commitment to showing up for her stepchildren’s sporting events and cooking Sunday family dinners.

“On June 8, 2017, FBI Director James Comey was asked to testify before the Senate Intelligence Committee about his firing and the Russia investigation. It was the same day as Ella’s high school graduation,” Harris wrote. “I agonized over the scheduling conflict and ultimately took a deep breath and called Ella from D.C. She could not have been more understanding when I told her I wouldn’t be able to make it back in time, but I still felt awful about it. I sought the advice of my female colleagues in the Senate. And it was Maggie Hassan, the senator from New Hampshire, who offered me some sage wisdom: ‘Our kids love us for who we are and the sacrifices we make,’ she said. ‘They get it.’”

Though she ended up missing her stepdaughter’s graduation ceremony, Harris went on to fulfill her civic duty, reporting that she made it home for their Sunday family dinner. As Harris noted, for moms “time is precious” and balance is elusive. Yet with transparent communication, childcare support, and flexibility, you can lead well and honor familial commitments.

2. Own your expertise; speak up for your values

Another stunning moment from Wednesday’s debate came when Pence denied the existence of systemic racism and implicit bias in policing while criticizing Harris for being divisive in the senate.

Harris shot back, “I will not sit here and be lectured by the Vice President on what it means to enforce the laws of our country. I’m the only one on this stage who has personally prosecuted everything from child sexual assaults to homicide. I’m the only one on the stage who has prosecuted the big banks for taking advantage of American families. I am the only one on this stage who prosecuted for-profit colleges for taking advantage of our veterans. And the reality of this is that we are talking about an election in 27 days where last week, the President of the United States took the debate stage in front of 70 million Americans and refused to condemn white supremacists.”

With years of experience as San Francisco’s district attorney then California state attorney, Harris understands the justice system inside and out and has worked to reform racist policies while maintaining accountability for wrongdoing. While campaigning for president in 2019, Harris had outlined a plan to “Stand Up for Black America” that called for ending mass incarceration, creating a national police systems review board, making attending historically Black colleges and universities debt-free for students, and other measures.

Here’s why this is an important leadership moment for women: when pressed, Harris didn’t shy away from acknowledging her expertise and went on to affirm her values and those of her running mate, Former Vice President Joe Biden. Women are often socialized to be humble and even hide their beliefs so as not to upset others; Harris is a leader who is unafraid to call out racial injustice. As she said in an essay for Cosmopolitan, “We cannot let up in the fight for equality, fairness, and justice. Even when, if not especially when, it is hard or uncomfortable to talk about.”

The daughter of Shyamala, an Indian-American immigrant, activist, and breast cancer researcher, Harris was told by her mother growing up not to complain about problems but to take action. As a senator, Harris has sponsored a number of bills aimed at addressing existing problems, including a recent bill regarding economic relief for Americans facing income instability during the coronavirus pandemic. She says her mother’s pragmatic advice drives her work.

“My daily challenge to myself is to be part of the solution,” Harris wrote in her memoir, The Truths We Hold: An American Journey. “My challenge to you is to join that effort. To stand up for our ideals and our values. Let’s not throw up our hands when it’s time to roll up our sleeves. Not now. Not tomorrow. Not ever. Years from now, our children and our grandchildren will look up and lock eyes with us. They will ask us where we were when the stakes were so high. They will ask us what it was like. I don’t want us to just tell them how we felt. I want us to tell them what we did.”

4. Know and wield the power of your voice

Recently, Harris composed an OpEd for USA Today that criticized the current administration for its failures in handling the COVID-19 pandemic. In a searing conclusion, she wrote, “Solutions are out there; we just need competent leaders who know how to listen, lead with empathy, and get things done.” Politics aside (and if you’re conservative, thank you for reading this far), what strikes me about Harris here is simply the power of her voice. Both as a speaker and writer, Harris is clear, passionate, and brave.

I want to see more women speaking up like Harris—and no, we don’t have to agree. Better yet, I hope we don’t. We need more healthy dialogue in a country that right now seems so divided by party lines. Where can we come together in common values? Where can we respectfully disagree? I want us moms to remember that our voices are powerful and we can and should share that power with others, especially other women.

I want us moms to remember that our voices are powerful and we can and should share that power with others, especially other women.

I saw a few memes after the debate that criticized white women for identifying with Harris during her debate performance. Their creators argued that white women think they are Harris when really they are Page, and I think that there is much truth in that statement. They made me reflect on how I, as a white woman, have been complicit in silencing Women of Color.

Yet to deny that white women have been in Harris’ shoes—interrupted by men in classrooms, boardrooms, at the table, and beyond—is to deny part of their feminine experience. Maybe the answer for me is actually a “both/and”: I have both been interrupted by men, and I have allowed Women of Color to be interrupted.

So, where is the leadership lesson from Harris in all of this? For much of her career, she has been the only one in the room who looks like her, she told reporter Lisa Lerer in The New York Times. She is no stranger to breaking barriers.

“The thing to remember is you are never in that room alone,” Harris said. “We are all in that room with you, expecting that you will use your voice, and use it with pride and use it in a way that represents all of those who are in the room with you but not physically there. It is part of the way that I approach my work and always have.”

She believes in a country where leaders speak up for those who have been traditionally silenced. And as a mentor to several, she’s empowering a new generation of diverse leaders and voices. Regardless of how you vote or what you look like, I hope you see a little bit of yourself in Senator Kamala Harris, a bold mother who claims her voice.

Let us be the type of women who speak up and disrupt those who would silence other women. Let us be women who, like Harris, know and wield our power.