Becoming a mother puts women face to face with this reality: there is much in life we cannot control. Be it diaper blowouts, spilled Cheerios, toddler meltdowns, and the piles upon piles of clothing our kiddos keep growing out of, managing a tidy home with children underfoot often feels like chasing a mirage.

Case in point: recently I was feeling quite smug because I’d managed to convince my 2-year-old to assist me with tossing his blocks into their designated container. “Good job, buddy!” I said, grinning at our finished work.

Two seconds later my face dropped when he picked up the plastic box and gleefully spilled its contents across the playroom floor. “No, Jack what are you doing?” I groaned.

“I boomed it,” he proudly replied.

Though we can’t always prevent our kids from making messes — TBH dumping blocks on the floor is pretty fun — we can get them involved in cleanup. This may feel counterproductive when they’re younger, but including our kids as we tidy actually sets the stage for life-long habits. These professional organizers and real moms agree, and they’re sharing their best advice for cleaning with kids.

Organizing expert Marie Kondo’s top tip for moms eager to teach kids about tidying is to tend to your own belongings first. Our little ones are watching how we treat our diaper bag, booties, and even our dirty laundry, and will emulate our behavior as they grow. Ask yourself: are you putting everything away, or dropping belongings haphazardly around your home?

Kondo, a mother of two, best-selling author, and host of Netflix’s Tidying Up with Marie Kondo, believes parents should bring kids along as they clean rather than make it a solo act. “As you tidy your things, explain to your children what you’re doing so they can learn from you and observe what a tidied home looks like,” she suggested.

Amberly Ticotsky and her partner practice this tip in their household, verbally reminding each other of chores and describing their actions, such as taking out the trash, to their kids. “With two kids under three, we have learned that the older one does better when he isn’t the only one,” she said. “We’ve started talking to the baby as if she had more control over her actions.” 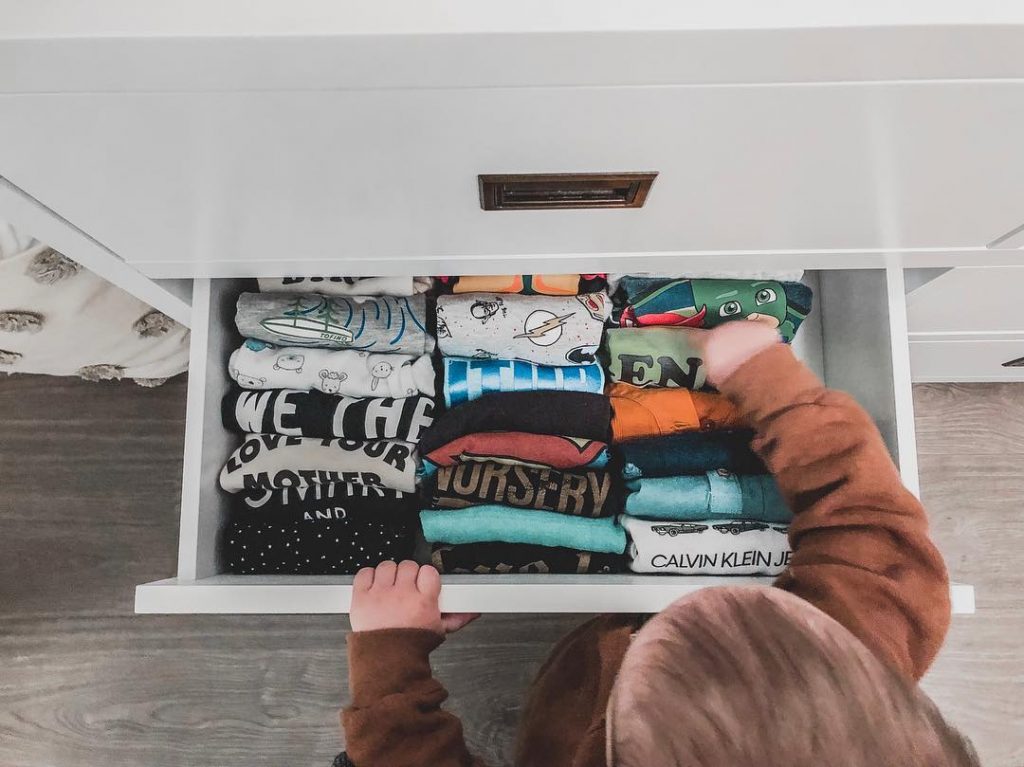 As Mary Poppins says, “In every job that must be done, there is an element of fun.” Set the tone for your children by introducing tidying as positive and necessary rather than bothersome. Kids love a good game, so why not turn cleanup into one?

Chicago-based organizer Brigit Stacey suggests setting a timer and having kids race against the clock to see how many toys they can put away before the timer buzzes. Cleaning up can also be a great opportunity to integrate make-believe, she added. Are there characters your children adore? Make up a story about Queen Elsa’s or Elmo’s need to tidy up that your child could act out. To make cleaning with her daughter more joyful, mother of one Ellen Johnson sings Barney’s classic “Clean Up” song.

Attitude is everything. “When you make the process engaging instead of chore-like, you encourage their interest in tidying, too!” Kondo said.

Best-selling author and mother of two Gretchen Rubin advises parents to pare down their children’s possessions so it’s easier for everyone to maintain order. “If they have 50 stuffed animals, it will be hard to manage their collection,” she said. “Similarly, if their closets and drawers are stuffed full of clothes that don’t fit or are unseasonable, children are going to make a mess when they get dressed.”

While there are a variety of approaches to cutting back on stuff – Rubin describes hers in her latest book, Outer Order, Inner Calm – what’s most important is making time to edit your kids’ toys and clothes so they don’t become overwhelming. If your child is mature enough, invite them to join you as you sort through which items to donate, which to put into storage, and which to keep.

4. Designate a place for everything

It’s easier to maintain a tidy home when each of your possessions have their own home when they aren’t being used. Kondo recommends moms and dads “assign a designated spot for everything – and make sure that system is clear for your kids as well.” In Rubin’s family of four, coats were a recurring clutter challenge. As soon as she installed coat hooks for each member, everyone did a better job hanging up their coats.

For the littlest tidiers, use non-reader labels for your organization system so they understand where things go. “For instance, if a bin is used to store toy cars, print an image of a car, and tape or pin it to the basket, so that your little non-reader knows what items belong inside that storage container,” Stacey said. “When they see the image, they’ll know that toy cars belong in that container.”

Rubin has also had success with her daughters storing items in what she calls “treasure jars.” She invested in six apothecary jars to collect knick-knacks they’d receive from goodie bags and holiday treats. “The jars look terrific on the shelf, colorful and intriguing; and give us a place to put away neatly those delightful but pesky objects,” she said. 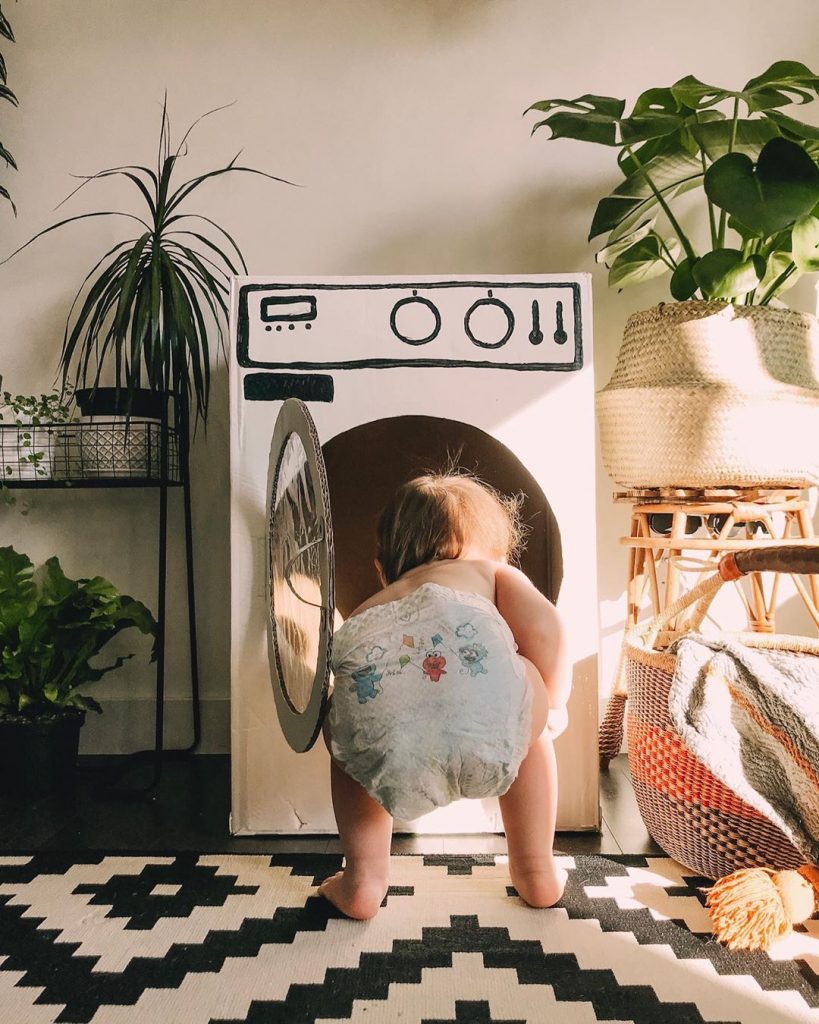 In her work with families, Kondo has observed that children as young as 3 years old can tidy using her KonMari method. She advises parents to begin with letting children fold their own clothing. “When children adopt the habit of folding the things they use every day — and putting them back in their designated places — it becomes easier for them to learn how to tidy anything,” Kondo said. After clothes, kids might move on to their toys, books and art supplies, then shared family work.

Kendre Israel and her partner encourage their toddler to join in them in doing the dishes, even though they know it might mean a bit of a mess at first. “It is usually a total mess of soapy bubbles and more like play time to him, but sometimes he manages to rinse a cup enough to put it in the dishwasher,” she said.

Israel was intrigued by a recent article in The Atlantic that noted tying chores to allowance, a characteristically American tradition, could actually be counterproductive. What’s important to their family is building habits and making chores a regular part of family life, an idea very much in line with Kondo’s methodology.

As we all know, it’s much easier to clean a handful of dishes daily than let them pile up in the sink over the week and then tackle the whole mess at once. (Yes, I’m totally guilty of this.) Sometimes there are seasons in life — I’m looking at you, newborn stage — where this will be your reality. When life stabilizes, make cleaning a daily practice and encourage your kids to do the same by helping them understand the consequences of letting clutter build up.

“Point out to them that it’s easier to keep up than to catch up,” Rubin said. “If they manage their possessions as they go, they won’t have to use big, valuable chunks of time dealing with it later,” Rubin said. That’s one lesson both kids and parents need to hear.

Remember: when kids join in chores, you may have to open yourself up to a different vision of tidy. Nevertheless, if you allow yourself to let go of your perfect vision, you’ll save yourself a lot of sanity and have more room in your heart to savor the joy of cleaning together.

Moms, what tips would you add to this list?