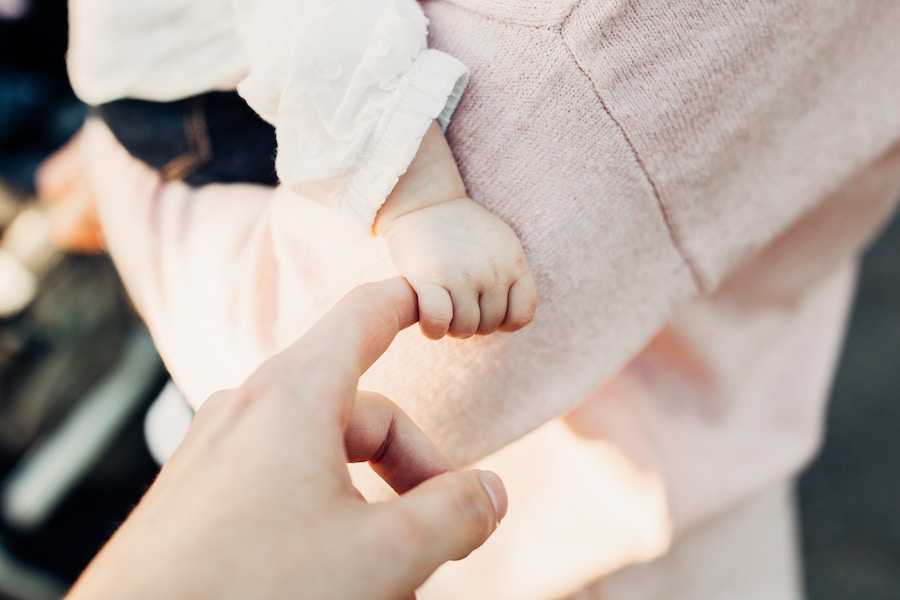 My husband and I exchanged a worried glance as we heard our pediatrician calmly say, “I suggest you go to the hospital.”

Then she added, “and don’t stop at home.”

It was December 24th. We were new parents who, only an hour earlier, were debating whether or not to take our new baby to the doctor for what seemed like a bad cold. The worry about being “those parents” who overreacted was quickly replaced with new worry as we barreled towards the downtown Chicago children’s hospital with our baby in the backseat suffering from a case of bronchiolitis caused by respiratory syncytial virus (RSV).

Whooping cough? Sure. We made our parents get the pertussis vaccine, and even asked our new nanny to get vaccinated, but an RSV diagnosis was new to us. We’d spent the first three weeks of our baby girl’s life in the NICU, so a hospital visit didn’t scare us as much as it probably would for some parents experiencing this fear for the first time. Still, spending our baby’s first Christmas on our way back to a hospital was not how we’d pictured it.

I now know most babies will contract RSV by age two and may not even know it, because most cases are mild, with cold-like symptoms. But about 2% of RSV cases will need hospital care, and premature babies, like ours, are at a higher risk. Worldwide, RSV is the second largest cause of death in children under one year of age (second only to malaria). It’s a primary reason preemies and babies with lung issues are encouraged to stay pretty isolated in the winter months when RSV spikes.

Somewhere Our Baby had Been Exposed to RSV

But we didn’t know all of this at the time, and she was our first kid. We wanted to show her off, which meant after she came home from the hospital, we had a revolving door of visitors to our house, trips to both of our offices, even a ride on the EL train. Somewhere along the way, she was exposed, so we found ourselves being admitted to the hospital on our baby’s first Christmas Eve.

My husband and I both had our own magical vision for how that first Christmas should be. I imagined meandering down Michigan Avenue amidst the trees twinkling with lights as a light snow drifted down around us. My husband imagined the three of us snuggled on the couch near the Christmas tree, introducing her to the classic movies Christmas Vacation, Home Alone and reading her The Night Before Christmas, just like his mom had done each year when he was little. Plus, with extended family coming into town from all over, including my brother flying in from overseas, I’d imagined introducing her to our big, crazy family and watching everyone swoon over our perfect little gift.

It turned out the only ones swooning were the wonderful nurses and doctors taking of her on her first Christmas Eve. Yes, we were near Michigan Avenue, but we wouldn’t be meandering. Yes, our big, crazy family was nearby, but only the two of us were allowed to see her. Luckily, The Night Before Christmas book was portable, so my husband was still able to read her that special story as he stood beside the rail of her crib on that first Christmas eve.

RSV is a virus, which means hospitals can only provide monitoring, fluids, and breathing treatments as the virus runs its course — you don’t know when you’ve seen the worst of it until your baby starts getting better.

Our worst was December 25th, Christmas night. The hospital actually discharged us after 24 hours, but told us to bring her back if she got worse. That night we didn’t sleep. We took turns holding our poor sick baby in the bathroom as shower steam surrounded us in an attempt to open up her airways. We counted her breaths per minute, wondering if we’d counted correctly because we were so worried and sleep deprived. With each labored inhale, we could see the outline of her tiny rib cage.

It was not the magical first Christmas we’d imagined, yet something about being in kindred company at a children’s hospital on Christmas both humbled us and made us feel extremely grateful.

By the morning we were back in the ER, admitted again. Thankfully, by two days post-Christmas, she was well enough to be visited by my immediate family. My overseas brother was able to hold his first niece, christened an uncle with a shirt full of baby puke. And the next day we were home.

It was not the magical first Christmas we’d imagined, yet something about being in kindred company at a children’s hospital on Christmas both humbled us and made us feel extremely grateful. Our daughter was certainly not the sickest kid in their care. Our family and friends were nearby to support us. We had health insurance and a top-notch hospital. And though it was tough to see it when we were in it, we were actually very lucky.