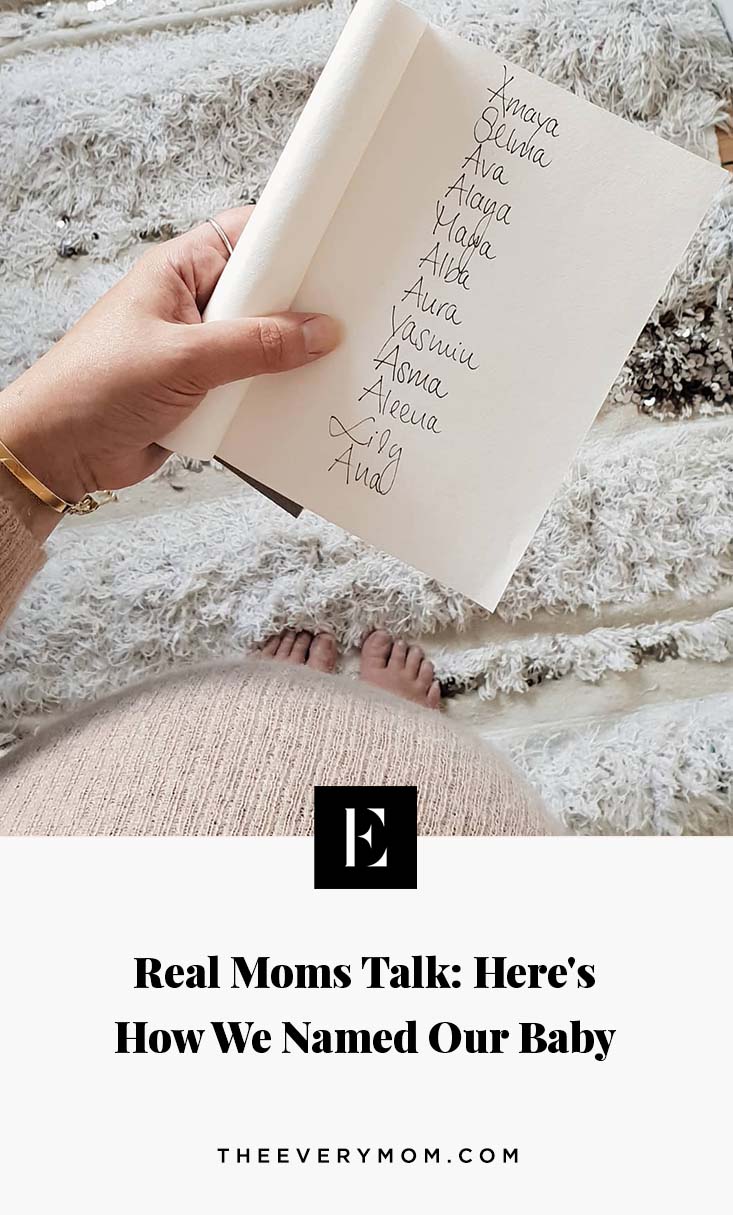 An insane amount of things go into getting your house/life/mind ready for having a baby – the nursery needs to be decorated, the clothes need to be washed and put away, the mommy-and-me groups need to be signed up for. But perhaps the most important choice of those nine months is what are you going to name this little life? It’s a huge responsibility, when you think about it, giving your child the name that will last a lifetime.

I’m sure many of us have asked our own parents how they chose our name, and so we asked you the same thing: how did you come up with your child’s name? We loved reading the sentimental, serious, and sometimes silly reasons you chose to name your child what you did. Read on for how real moms picked just the perfect name, and scroll down for the top baby names of 2018.

I went traditional and used a family name…

“We chose two family names, James (my grandfather) and Carter (my maiden name).”

“My son’s name is my maiden name: Merrill! Boy names are hard and our favorite name had become too popular amongst people we knew who’d had kids, so we went back to the drawing board. And now I can’t imagine him as anything else!”

“My husband has the same initials as his father and great grandfather. We wanted to keep that tradition going, so we were constantly on the lookout for names that started with ‘C’ and weren’t overly-common. I liked the idea that the initials carried some tradition but he got his own name. Landed on Cyrus after reading it in the Bible and it just felt good. His middle name is the same as his great great grandfather on my husband’s side.”

I wanted to choose something from another culture…

“Straddling cultures – for his first name we wanted an English name that wasn’t super common here in China (there are so many Annas and Mikes), but also one that people wouldn’t butcher trying to say in their second language, so a lot of names were out based on the sounds and letter combinations in them. And his middle names are his Chinese name – my husband chose that based on the meanings.”

“I wanted Lilly for my daughter but my husband wanted something more Scandinavian since he is Danish. We chose Klara because it means “clear and bright.” Klara Lilly certainly is bright and smiles so much!” 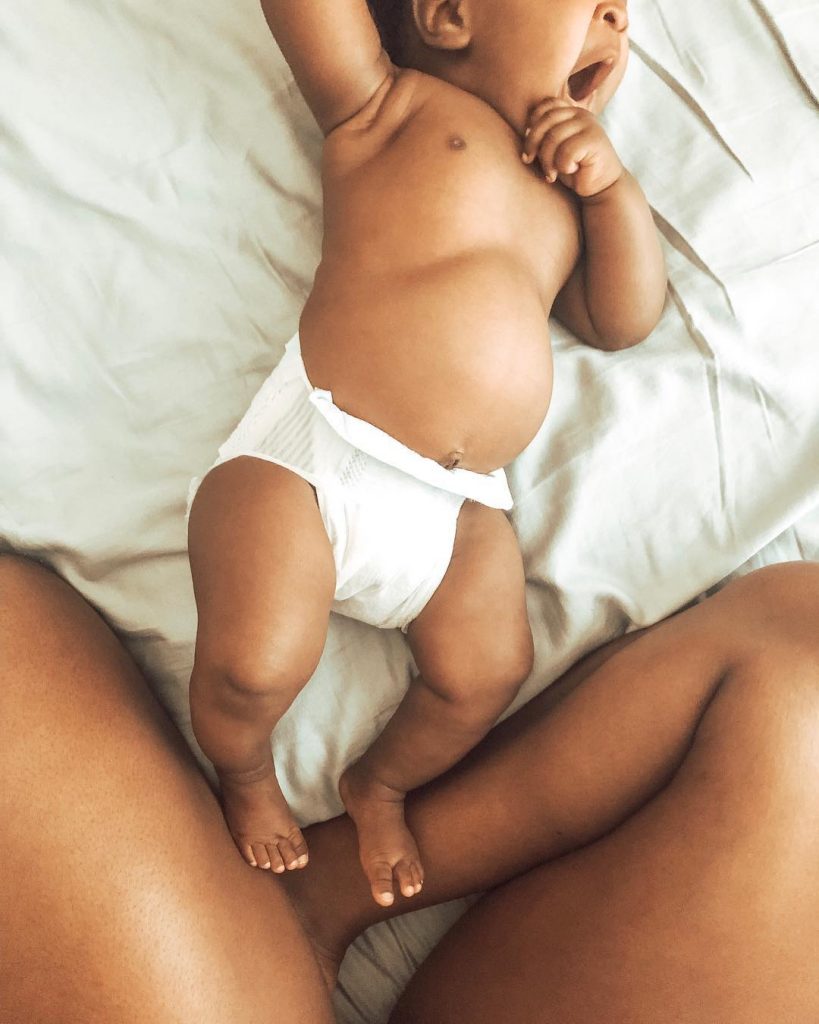 “With our first, we knew what we wanted for either gender. The second we used the app Babyname – basically the tinder of baby names. Then, we found out the name we chose was also a family name!”

Editor’s note: Kinder is another app we love for choosing baby names!

A powerful memory helped me pick my baby’s name…

“I was five months pregnant and listening to one of my favorite albums. As I was singing along there was a song that mentioned what would be my son’s name!”

“Our first daughter, Annabelle, was named after an island (Sanibel) near where we got married. I always knew my first born daughter middle name would be Jean, same as my middle, a strong family name.

Our second daughter will also have a fun story. The name is a secret still but she will be named after a character in a movie we saw, the first movie our first born (who’s now 6) saw in theaters. My husband also immediately loved it, and so does Annabelle! The middle name also is a family name.”

“Came up with it by using our best memories from vacation in Italy! Our most memorable day was strolling along the Tiber River drinking wine, so our son’s name is Luca River.”

“During our struggles with infertility, “I See the Light” from Tangled became mine and my husband’s song. From there, we knew Flynn was the perfect name for our son.”

I just loved the name!

“We were on vacation and got introduced to a friend’s friend. We shook his hand, and looked at one another and said, “That’s a great name.” It was five years before we had our first son.”

“My husband is a teacher so a lot of the names I liked he vetoed, but we agreed on Owen! And then my son got to pick between Logan and Colin for our second son!”

“We struggled with a name for a long time. Every time we would bring up names to friends or family we would get the crooked-faced “Really?” That was super annoying! We decided to stop telling people until after he was born.

We read something that said if you have a one-syllable last name you should go for a three-syllable first name. That narrowed it down for us. We also wanted something unique and pretty, but not so unique that people wouldn’t still be familiar with it. We also wanted to meet him first to make sure it fit. We chose Julian.”

“My husband and I had our boys’ name picked out since we were dating and loved it. The typical, “If we ever got married and had kids, what would we call them?” We would be on the edge of our seats every time someone in our circle had a baby boy hoping they wouldn’t use the name before we could. When we found out I was pregnant, I really wanted a boy so we could finally use the name. Luckily, it was, and baby Theodore was born in May 2017, about four years after we chose the name. We like to say we always knew he was coming.”

“My daughter’s name is Scarlett. We wanted something traditional but something all the other girls in her class wouldn’t have (I’m a teacher so I think about these things.) So I went on the Social Security website and looked up popular names by decade. We found her name on the 1930’s list!”

The baby weighed in… in their own way

“We found it important for our children’s names to have a significant meaning and we wanted something that was different but also not too far outside the box they would question us later on. We also decided not to name our children until they were born and we could see/meet them.

We compiled a short list of favorites and took them along with us to the hospital. With our first, we knew immediately, but with our second we tried calling him our top two choices, and when he responded to one by turning his head and opening his eyes wide we knew it was the right fit!”

“Narrowed to two names and asked HER when she was born. Her eyelashes fluttered to the second name and that was our go ahead!”

“My husband and I went back and forth on names while I was pregnant but finally settled on a favorite in the last few weeks before our son was born. We’d just say names out loud and brainstorm on car rides, then I’d write down contenders in my notes app. We actually ended up not choosing our top pick because our son just didn’t fit that name! Seeing him completely changed our minds.”

And if you need some inspiration, here are the most popular names of 2019 so far, according to Nameberry:

How did you choose your baby’s name? Share in the comments below!