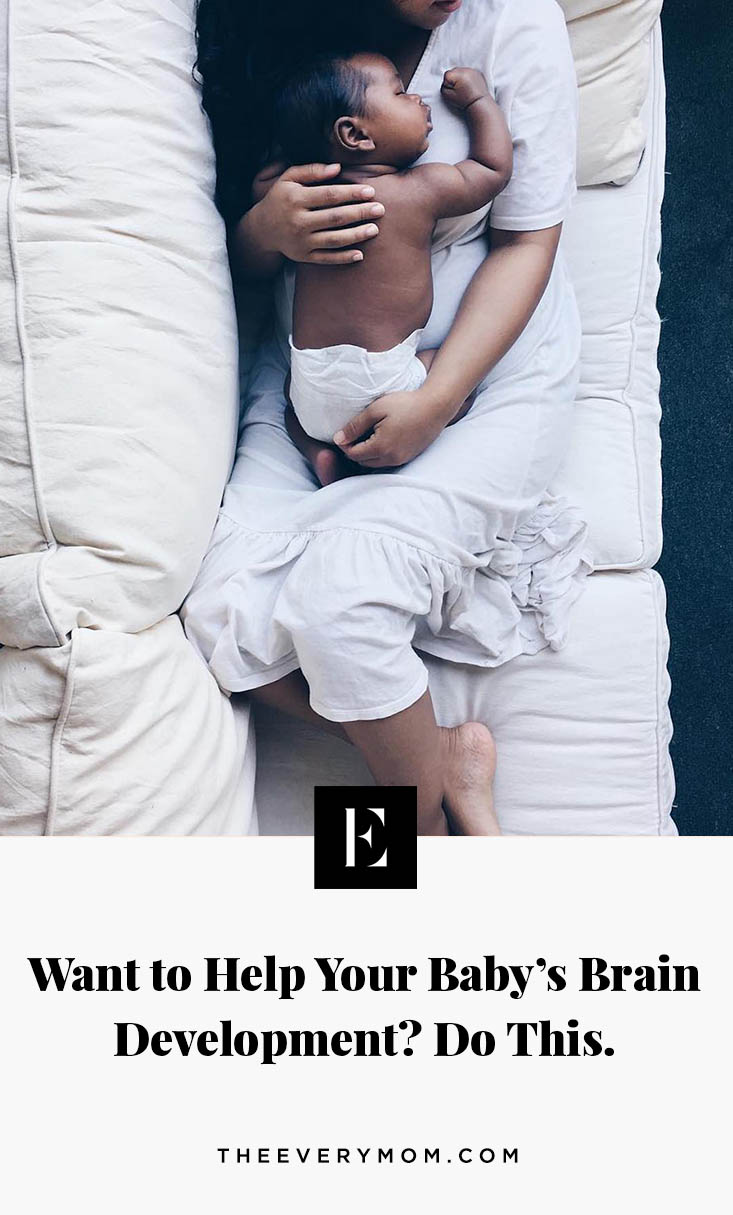 As a first time parent, it can be really hard to know what exactly to do in order to promote healthy growth and development in your infant. After all, just as much as your baby is getting used to a brand new world, you are, too – parenthood. The complications and nuances of parenthood can get truly overwhelming, and when it comes to your little one’s development, you might want to do the best thing but not know how.

Babies seem simple but are very complicated little beings. How often should they eat? When should they nap? How do they play? What can I do to help? These are all common questions from new parents, and they often bring about a variety of answers.

In spite of all the gimmicky tricks or gadgets that promise to “make your baby smarter,” there’s no quick-fix to healthy brain development. Natural, loving responses to your baby’s cues are all they really need in order to feel safe and secure enough to learn about and respond to their world.

From birth to age 5, a child’s brain develops more rapidly than at any other time in life. And the quality of a child’s experiences in the first few years of life helps shape how their brain develops.

But, there is one thing that most infant development experts agree on. From birth to age 5, a child’s brain develops more rapidly than at any other time in life. And the quality of a child’s experiences in the first few years of life helps shape how their brain develops.

There is one particular stimulation that makes an undeniable difference in your baby’s brain development – talking to them.

Research has shown that infants and children who have been talked to, read to, and generally engaged in verbal communication and interaction show more advanced language skills. Since language is fundamental to other cognitive development, talking, singing and reading to your baby can make the most of those brain-building years.

When do babies start picking up language?

Language learning begins a lot earlier than you might think. “Babies actually begin learning the basics of language, including the sounds of their parents’ native language, before they are born,” explained Dr. Emily Papazoglou, Ph.D., ABPP-CN, Clinical Neuropsychologist. “We even know that after babies are born, they can remember songs that were sung to them or stories that were read to them in the womb,” she added.

This time in the womb has a particular impact on babies who are born prematurely, as they miss out on that in-womb development. Talking to babies who are preterm becomes even more important, as they typically spend more time in the hospital and less time around their parents at this age.

Newborns have dozens of more neurons than an adult, but fewer neural connections. During the first year of a baby’s life, brain mass doubles due to the growth of interneuronal connections and pathways. This process of structuring the baby’s brain is fostered by a rich and healthy environment – a safe, calm, interactive space for babies to grow and develop.

Communication with a baby is so important for this stage in their development since brain development is at its fastest and most sensitive. Talking to and responding to your baby’s needs is necessary to form attachments, emotion recognition, and self-expression, which absolutely necessary for the child’s socialization. At the same time, ample opportunities for rest and independent exploration are also important in order to not overwhelm your baby.

How does talking to your baby help them as they grow older?

“Research has shown that hearing as little as 100 extra words a day as an infant is associated with better cognitive and thinking skills and scores several years later,” Dr. Papazoglou said. In other words, talking to your baby more can help accelerate language development, which can help support later reasoning, social, and academic skills.

The New York Times looked into one particular study from Betty Hart and Todd R. Risley at the University of Kansas which came to a staggering conclusion about just how much hearing early language is to kids’ development: “The greater the number of words children heard from their parents or caregivers before they were three, the higher their IQ and the better they did in school. And, TV talk not only didn’t help, it was detrimental.”

The researchers also argued that disparities in word usage correlated so closely with academic success that kids born to families on welfare do worse than children from professional or upper-class families entirely because their parents talk to them less.

In other words, if everyone talked to their young children the same amount, there would be no racial or socioeconomic education gap at all.

Of course, other researchers say that while word count is extremely important, it shouldn’t be seen as the only component of educational inequality. But, the thought itself makes a particularly strong case for talking with your babies.

What should I say to my baby?

The exact content of what you say to your baby is less important than the simple fact that you are talking to them, Dr. Papazoglou notes. “One of the simplest ways to talk more is to narrate what you are doing,” she said. For example, name body parts during bath time, count or label colors and food items while grocery shopping, sing songs, and read books or magazines together. ”

As your baby starts making sounds, mimic those back, and you may even start to see the beginnings of conversational turn-taking,” Dr. Papazoglou explained. When you respond to your baby’s “talking,” they’ll start to get the feeling that they what they are saying is important and matters and begin to understand how conversation works, and that’s a great skill to build on from the very start.

Conversations with your baby might not make much sense content-wise, but it is an entirely adorable experience, we promise. Use simple, descriptive words and talk to them as you would talk to anyone else. While pregnant, I once noticed a mom and her infant in the laundry detergent aisle at the grocery store. The mom was describing the different detergents to her little baby, explaining why they’re different and how to choose one and for what purpose. It struck me as the most organic, perfect way to converse with a young child – talk to them as if they are learning about the world because they are. I’ve used that mom as a model ever since.

So how do I do make sure I’m doing it?

So, yes, talking to your baby is super important, but it’s a ton of fun too. Watching our little ones grow, develop, and interact with the world around them is one of the most rewarding parts of parenthood. So, start chatting, and when your baby turns into a talkative little toddler, be sure to let us know those hilarious things they say!