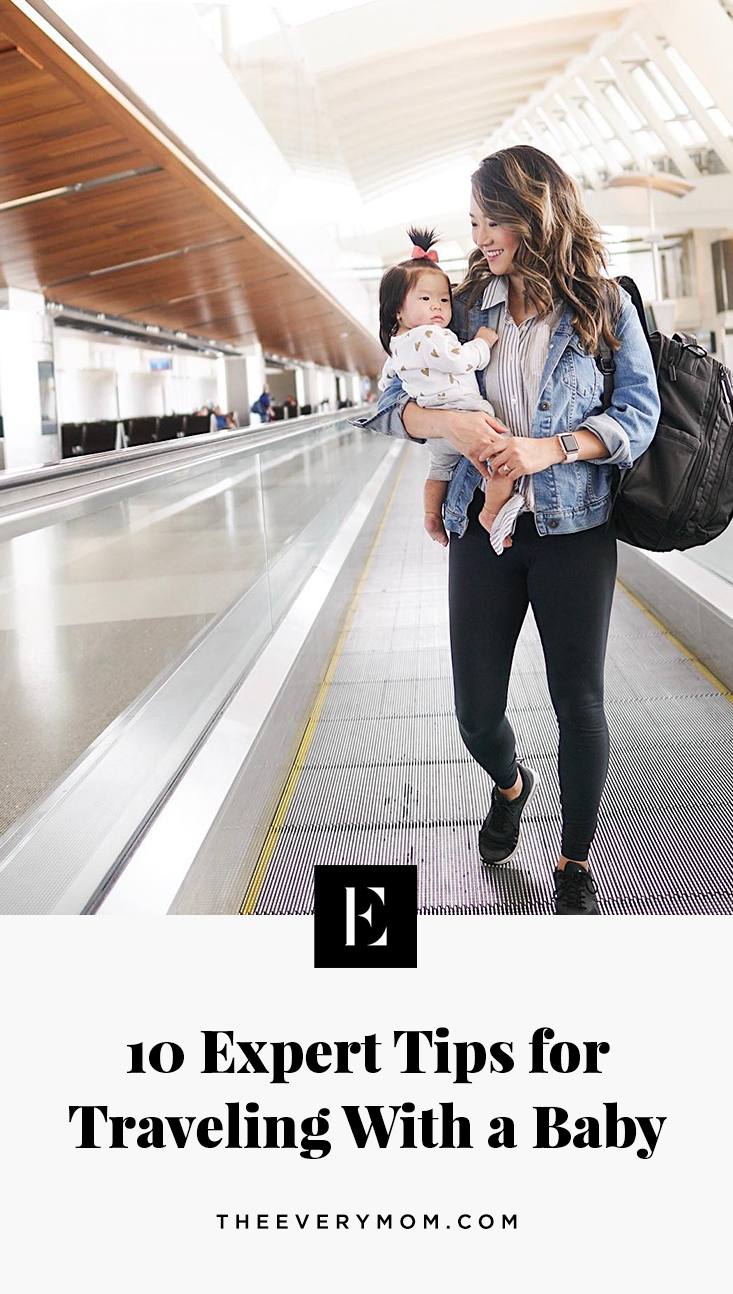 Travel has been a huge part of my adult life. I didn’t take my first trip outside of the U.S. until I was 20, but after that first trip abroad, I was hooked. Luckily, my husband, Jordan, loves to travel as much as I do. A year into our marriage, we moved from California to London and have been exploring this side of the world for the past five years.

When we found out we were expecting our first baby, people had opinions of how that would change our lifestyle. And — as I’ve learned is the case with a lot of parenting topics — they weren’t shy about sharing those opinions with us. We heard two things over and over:

I was determined to fall into that second bucket.

We welcomed Henry into the world in March 2018 and promptly booked flights for summer trips around Europe. This was going to be easy, right?

In an effort to resume our old travel schedule, we decided to take Henry on a quick weekend trip to Amsterdam when he was 12 weeks old. I wish I could say it was smooth, but it was probably one of the worst trips I’ve ever taken. Nothing actually went wrong, but I was a wreck.

I was terrified of being in a different country and not knowing how to take care of a new baby. What if Henry gets sick? Or his ears hurt on the flight? Or he doesn’t want to sleep in the crib provided by the hotel? Or we have to take a cab but don’t have a car seat and OMG WHY AM I LEAVING MY SAFE LITTLE HOME?

Though my anxiety was sky high in the days leading up to our trip, I didn’t admit it. Everything was fine. Nothing had to change because we had a baby.

And, let’s be honest, most people on Instagram make traveling with a baby look so easy.

We landed in Amsterdam at 9am, and after a full day of sightseeing, we were walking along the canals enjoying the sunset. Or, we were supposed to be enjoying the sunset. I couldn’t enjoy anything because I had spent the entire day wound tight. We had a few diaper mishaps and we were down to his last clean outfit. Every little cry from Henry put me on edge. Finding places to breastfeed as we were jetting all over the city, added to my anxiety. I lost it.

I had been so focused on ignoring my fears and treating this trip like it was any other weekend away, when I finally hit my breaking point, I hit it hard. I so badly wanted to slip right back into our old life and travel routine because that’s what I thought travel was supposed to look like. And, let’s be honest, most people on Instagram make traveling with a baby look so easy.

After that terrible first day, I was tempted to never leave home again. I was ready to throw in the travel towel and see the world again once Henry turned 18. Luckily, with some practice, I’ve managed to finally enjoy traveling with our new little guy in tow.

Here are 10 of the best lessons I’ve learned that I hope will help anyone else who feels overwhelmed traveling with a baby: 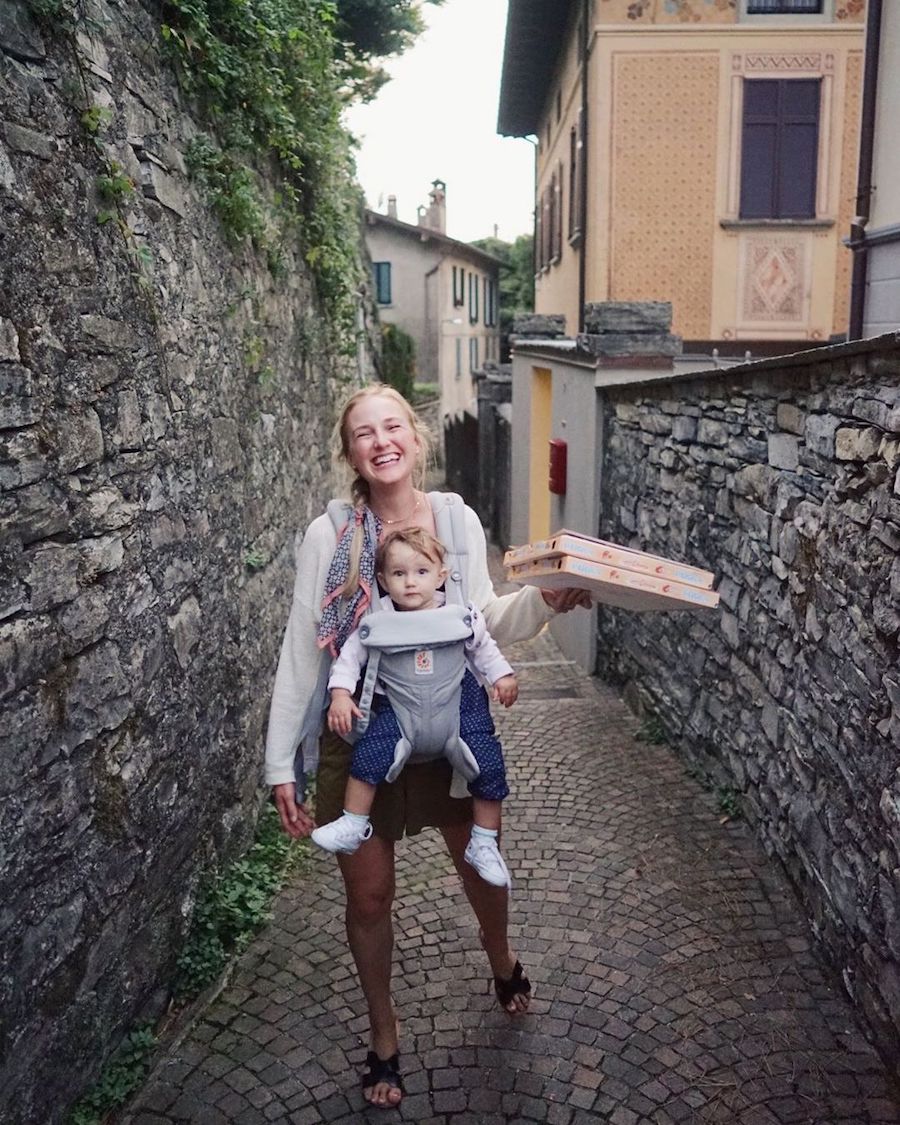 Travel with a baby or a child will probably look different. They don’t necessarily eat or sleep on your schedule and they certainly don’t love doing the things you love to do. We now get to the airport unbelievably early, we sometimes have to check a bag (my least favorite thing), and we are usually hotel or rental house-bound after bedtime.

Travel looks a lot different now and it took me a few trips to realize that this difference isn’t bad. We used to wake up early to get a head start on our day, but working around Henry’s schedule means things move a bit slower. Now, we usually enjoy cuddles in bed with coffee before setting out for a shorter day. Different? Yes — but also great.

2. Each place gets one “can’t leave without doing” item

This slower pace that we’ve had to adopt means we’ve needed to readjust our expectations.

In the midst of my Amsterdam meltdown, I complained that the only thing I really wanted to do on the trip was go to the Anne Frank House. Walking through a cramped museum felt too hard to do with Henry in tow. Jordan, always sensible, suggested that we book tickets, and if Henry got fussy and couldn’t sit through a trip to the museum, he’d take him outside for a walk.

Building on that idea, we now each get to define one experience or activity that we can’t leave without doing. If everything goes wrong and we can only make it out of the hotel for part of the day, at least we’ve each done the one thing that was most important to us.

3. Don’t compare yourself to anyone else

On one of our 11-hour flights between California and London, there was a cute couple flying with a three-month-old baby. It was their first international trip with him, but everything they did looked effortless. Getting the baby to sleep? A couple of pats on his back and he was out for hours. Eating their dinner and enjoying a glass of wine? It looked casual and natural. They even got to watch movies disruption-free.

It’s difficult, but I try to remind myself that I’m only seeing a sliver of what another person’s parenting journey is like.

Meanwhile, I was a row over extremely flustered as I tried to balance Henry, a tray of food, and a drink, which I proceeded to spill all over me. As we rocked Henry to sleep in the aisle holding our breath and hoping that he wouldn’t cry and wake up the entire 777, I watched that couple and felt so insecure.

Halfway into the flight, I realized that watching them and being critical of myself wasn’t helping anyone. It’s difficult, but I try to remind myself that I’m only seeing a sliver of what another person’s parenting journey is like. 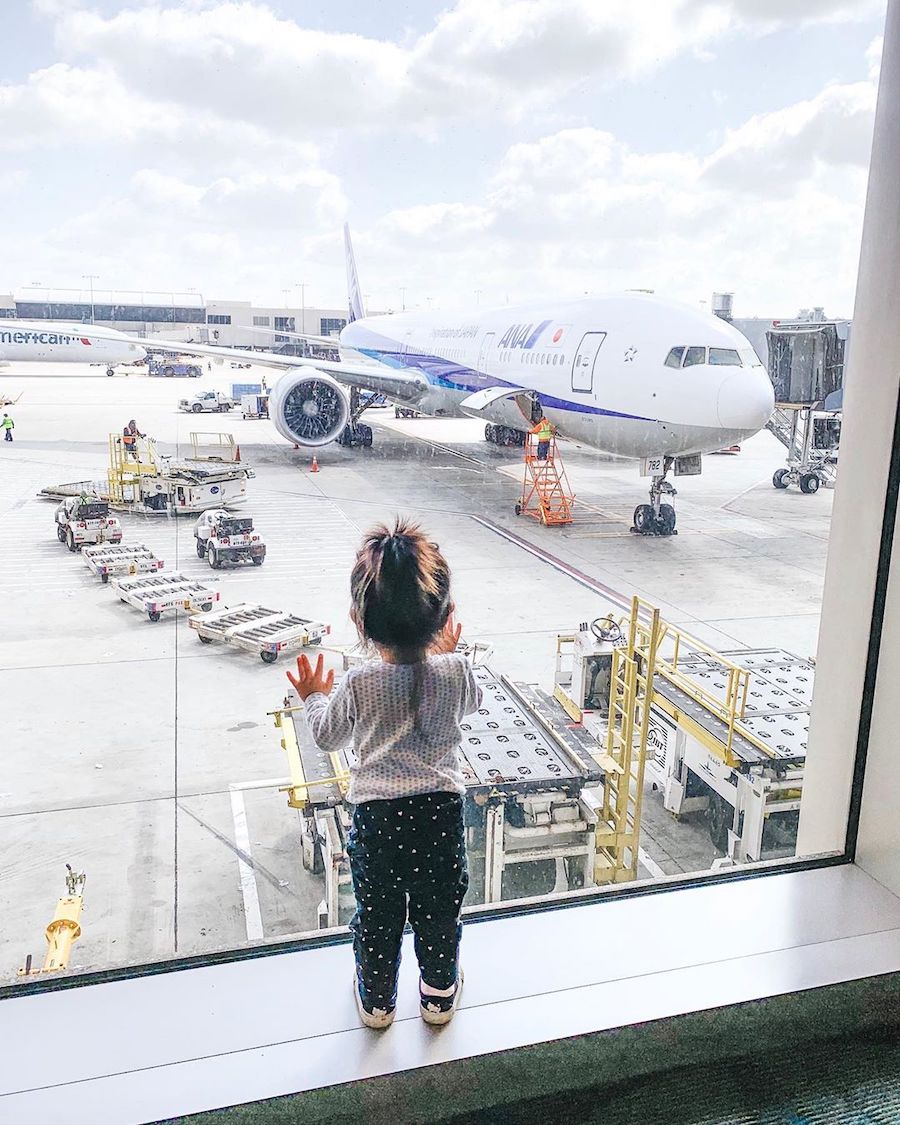 4. It’s ok to travel just because you want to

I’ve had well-meaning friends tell me that it’s pointless to travel with a young child. They’re not going to remember it, so why waste money hauling them around the world? Not to mention, it’s messing up their sleep schedule and taking them away from the comfort of their own home.

I get it. Hauling my baby to the Christmas markets in Vienna can look a little ridiculous to some. But I’ve come to realize that it’s ok to do things for you. Henry won’t remember going into the ocean in Spain or cruising the canals in Amsterdam — but I will. Taking these trips helps me to still feel like me, which most new parents will agree is so important.

While I am no baby travel expert, I’ve found it extremely helpful to hear the tactical pieces of how people pack up their baby and fly around the world. These are some of the best practical tips that have worked for us:

5. Buy things when you get there

We travel light — very light. Having Henry in tow usually means we have to check a bag, but it still works best for us to take a minimal amount of things with us. Our first stop is to buy diapers, wipes, food, and (if needed) formula when we get to our destination. We usually do a little research before we leave to check the reviews of food brands sold in the country we’re visiting. And we’ve gotten pretty good at creating makeshift toys out of water bottles and boxes, so we don’t have to pack a lot to entertain him.

Jet lag is real. The first time we took Henry to California — an eight hour time difference — I was worried about how his little body would adjust. The first few nights were pretty rough. What worked for us was keeping his naps short and frequent during the day and then not trying to force sleep when he woke up at 1 am wanting to play. We drank a lot of coffee those first few days. 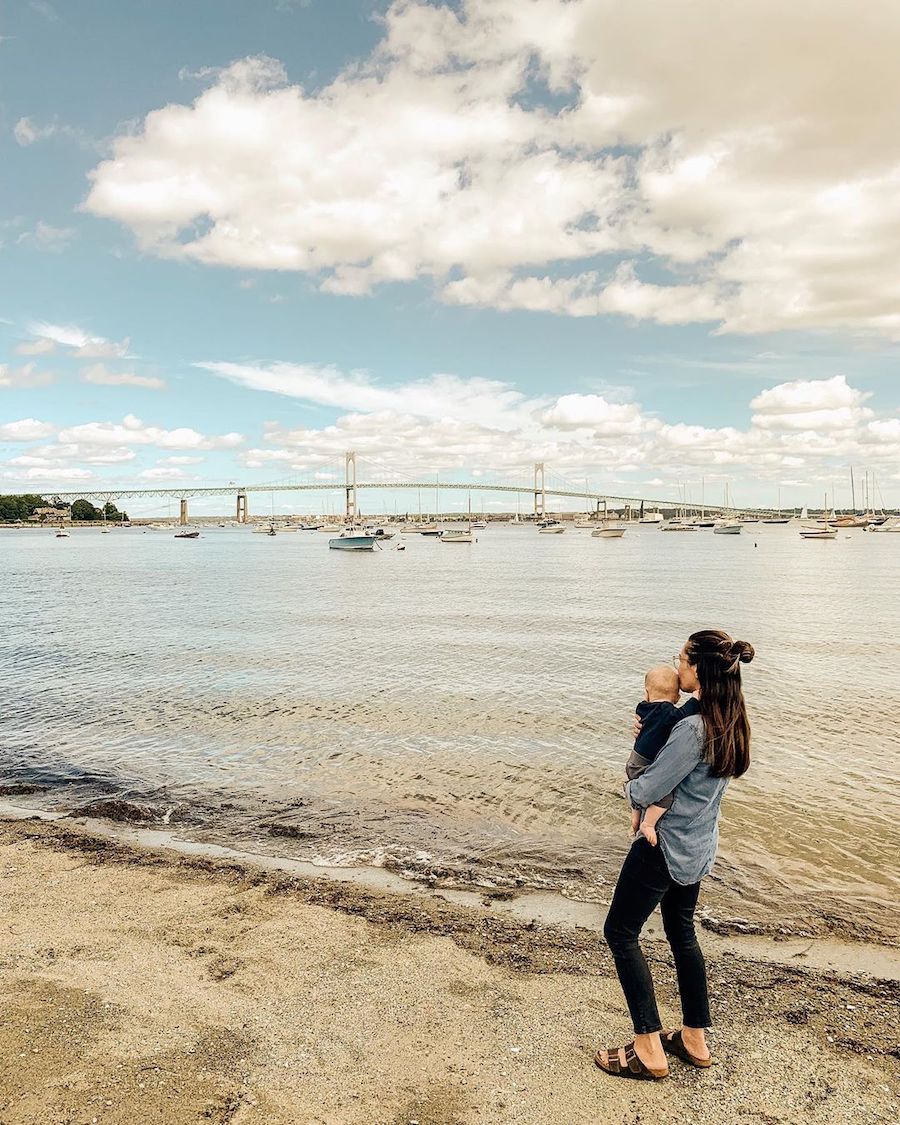 7. Book accommodations with a separate bedroom

Our terrible trip to Amsterdam was made even more terrible because we naively didn’t realize that when Henry went to bed, that would mean lights out in our hotel room. We spent two nights eating room service in the dark while not speaking above a whisper. Since then we’ve always booked an Airbnb or a hotel with a separate bedroom.

8. Bring a blanket for a makeshift airplane bed

If you’re taking a long haul plane and your baby is small enough, the bassinets can be a welcome help — especially if your baby doesn’t like being held while he sleeps (looking at you, Henry). Bring a blanket, a pad, or something to put in the bassinet. On one of our flights the airline provided something but on other flights they haven’t.

9. Board the plane last

The first time we flew, Henry was happy to be worn in a sling and cuddle on my lap. We pre-boarded proudly and got prime overhead space on the plane. That was the life.

Suddenly, my little baby who was once happy cooing on my lap as we waited for the plane to depart became an energetic little monkey who wanted to roll, kick, and crawl all day long — and I know, he’s only going to get more mobile.

We’ve ditched pre-boarding. If two of us are traveling with Henry, one of us will board early with all of the bags and get our space set up. The other tries to keep Henry as active as possible and get on the plane last. 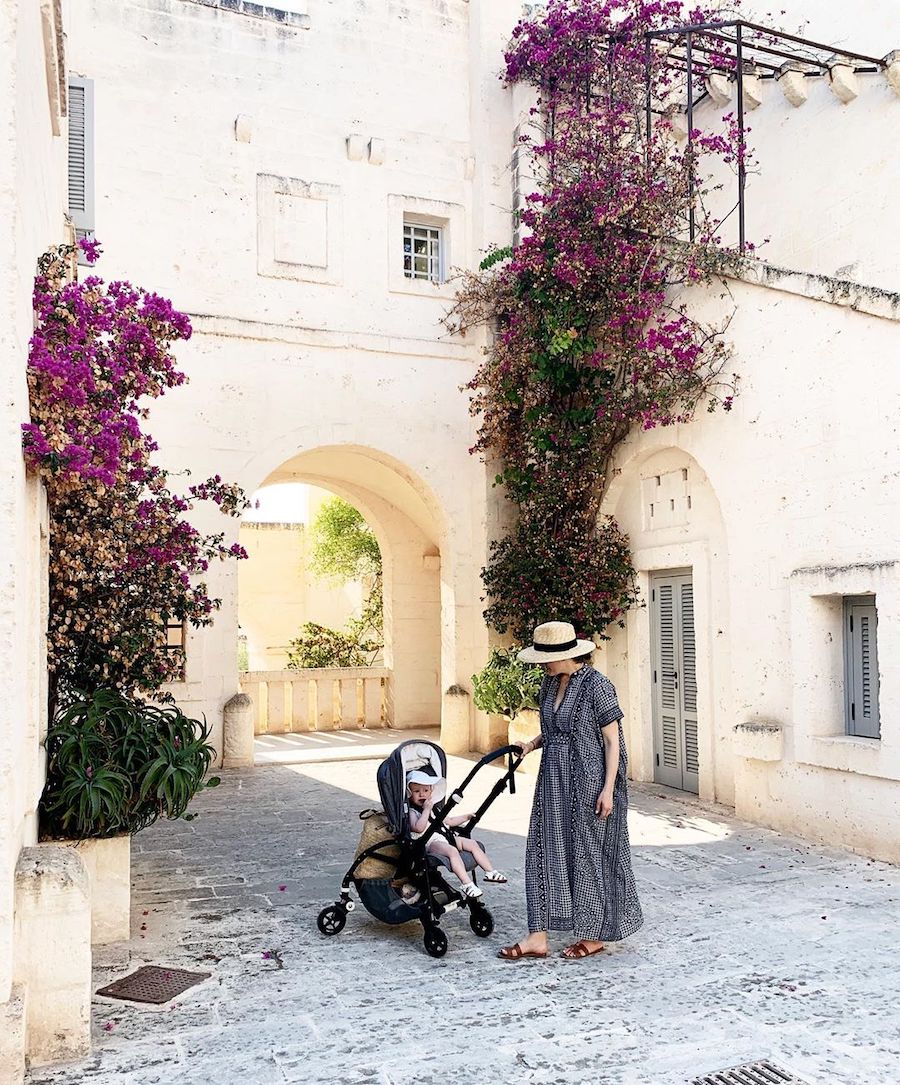 10. Use the family line and family lounge

A lot of airports have these, but not all of them do a good job advertising them. I always check the airport’s website before we travel to figure out what amenities we’ll have.