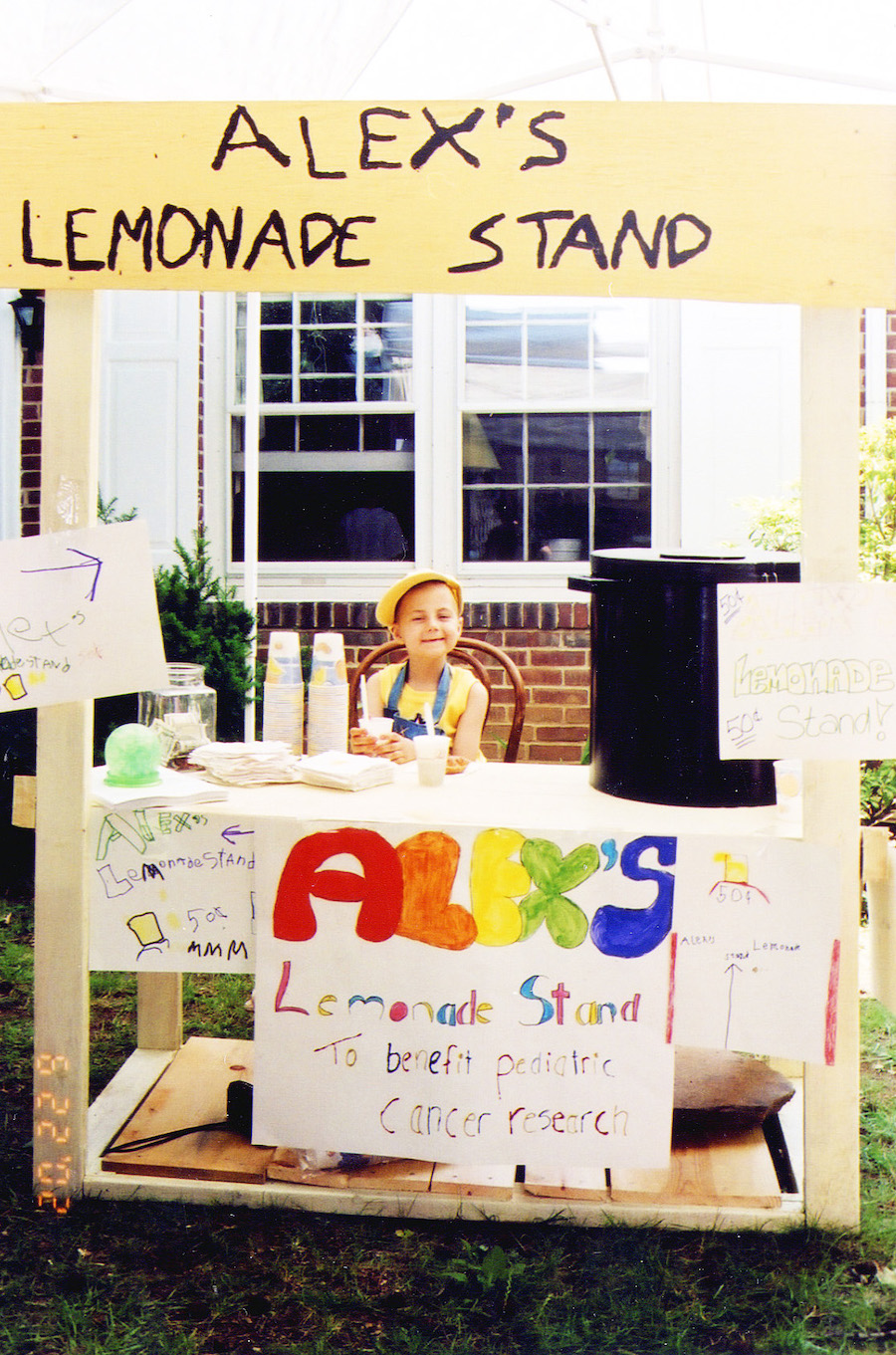 No parent can ever prepare for the day they’re told their child has cancer. For Liz and Jay Scott, that unimaginable moment came before their daughter Alex’s 1st birthday—their little girl was diagnosed with neuroblastoma, a disease she battled for the rest of her life.

A few years later, while undergoing treatments at age 4, Alex told her parents she’d like to start a lemonade stand in their home’s front yard to help other kids battling cancer like herself. Her first stand, held in July 2000, raised more than $2,000 for pediatric cancer research—and Alex didn’t stop there. She continued to host lemonade stands each summer, and in 2004, announced she wanted to raise $1 million with the help of other kids hosting their own lemonade stands around the country. In July 2004, just 10 days before she tragically passed away at age 8, Alex reached her $1 million goal.

Today, Alex’s legacy and passion for helping others lives on with Alex’s Lemonade Stand Foundation (ALSF), a non-profit organization that her parents, Liz and Jay, founded in 2005. Since then, ALSF has grown into one of the leading childhood cancer foundations in the U.S. and has raised more than $200 million for childhood cancer research.

In the below interview, we were lucky enough to speak to Alex’s mom, Liz, to learn more about her daughter’s incredible story, how having a child battling cancer changed her motherhood journey forever, and how you too can help raise money and awareness for pediatric cancer research and treatments.

To start, please tell us a bit about yourself and your family.

Alex was the second of our four children and our only daughter. Her older brother, Patrick now works with us at Alex’s Lemonade Stand Foundation (ALSF), and her younger brothers, Eddie and Joey, support ALSF any way they can by helping around the office and at special events. Alex originally began her treatment in Connecticut after she was diagnosed with neuroblastoma shortly before her 1st birthday, and our family relocated to Philadelphia when she began a clinical trial at Children’s Hospital of Philadelphia (CHOP). Nineteen years later, we still live here in the Philly area! Interesting fact: most people think Alex’s first lemonade stand was held in Philadelphia, but it was actually held in the front yard of our West Hartford, Connecticut home. 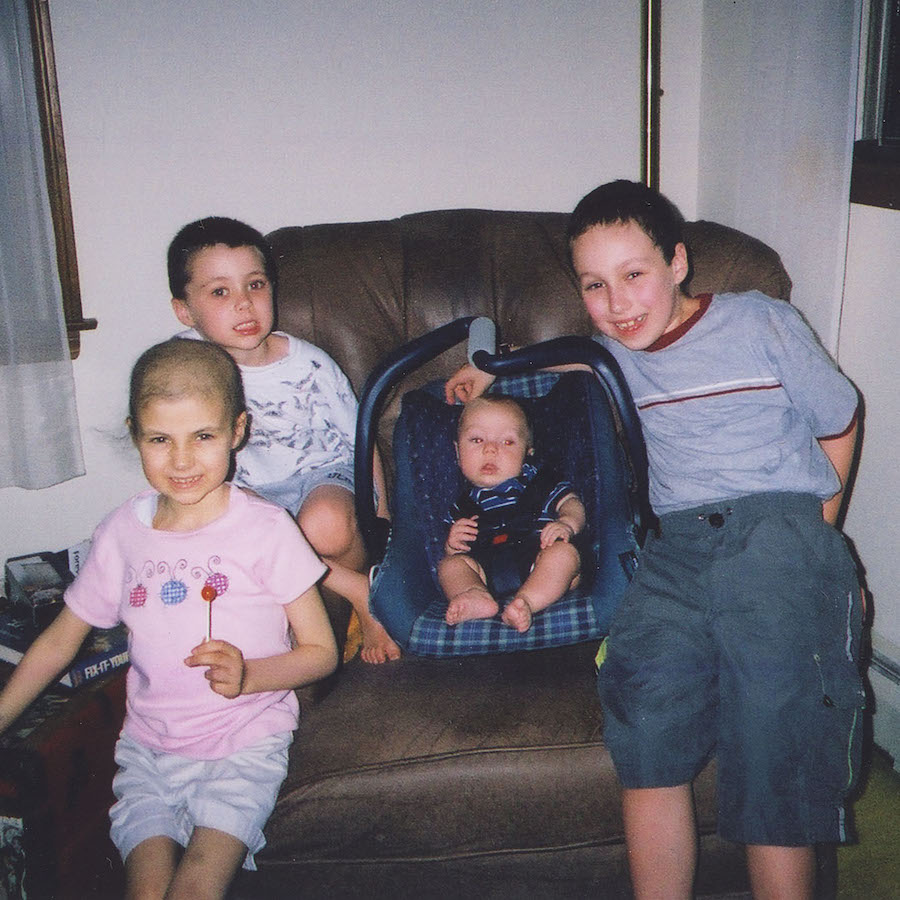 Your late daughter, Alex, opened her first lemonade stand at age 4 while she was battling childhood cancer—tell us about her fundraising idea and passion for helping other kids.

Alex was a very determined little girl. She was diagnosed with cancer just before her 1st birthday, and she battled it for the rest of her life. When she was 4 years old, she told us she wanted to host a lemonade stand. She was very persistent, and when we asked her why she wanted to do this, she said she wanted to help other kids with cancer like herself. Wise beyond her years, Alex knew that she had to do something to help find new cures, and I guess, because she was so independent-minded, she thought that a lemonade stand would be a way she could contribute herself (without mom taking over!). She held her first stand in July 2000. Word spread and people came from all over to support Alex—that day she raised $2,000, and we knew she had accomplished something special. Alex went on to host lemonade stands every June, and each year they grew in size and notoriety.

It was very important to Alex to help all kids with cancer—not just those with her type of cancer. As her cancer became more aggressive, she became more determined to change things for other kids. So, in 2004, she announced she was going to raise $1 million. Her idea was that if everyone had lemonade stands and contributed their proceeds, she could reach her big goal. And she was right! There were stands all over the world that summer, and she reached her goal in July 2004, just 10 days before she passed away. Her efforts had started a movement, a lemonade movement, to cure childhood cancer, one cup at a time.

How did Alex’s diagnosis change your family and you personally as a mom?

It is hard to say how it changed us because it changed just about everything. It changes your perspective for sure; many of the small things we all worry about as parents no longer seemed significant. However, at the same time, the amount of stress I was under, the overwhelming feelings of fear I had that we would lose Alex, the pain of watching her go through treatments, seeing how it affected my other children, and the financial stresses created this bubble of anxiety that followed me around for years. That changed me forever, and I am sure the experience of living with that uncertainty has affected everyone in our family in different ways.

Having said that, through those years, we gained a great outlook on what matters most in life: health, family, and happiness. I think our family has a deeper understanding of what it means to have real stress versus the kind of stress we often bring upon ourselves. Because of that, I think we as a family are empowered to have control of our lives. When we can change a situation in our lives for the better, we will. If there is a problem that we think we can solve, we will give it a try. I suppose that was how Alex lived her life as well and why she started her lemonade stand. 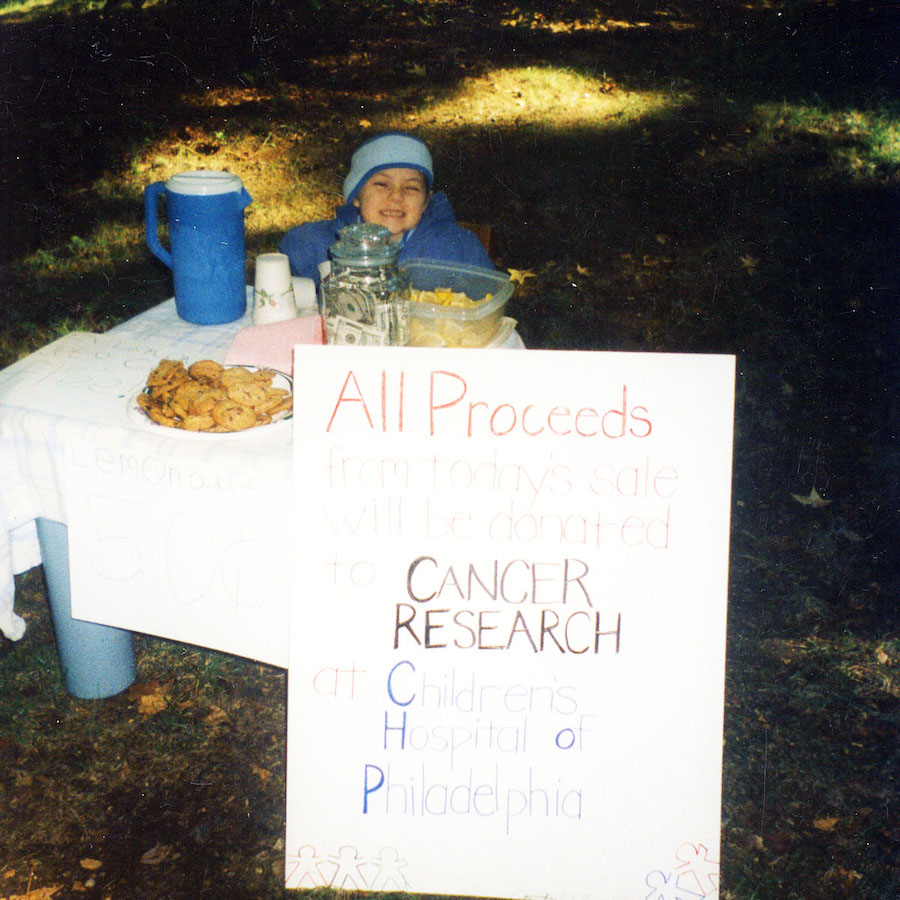 Alex continued to hold lemonade stands to raise money for childhood cancer each year—when did her work for this important cause become widely recognized and what did that mean to Alex and your family?

With each lemonade stand she had, her efforts became more widely known. It was before social media was really a thing, so most of her notoriety came from traditional media sources—I would say People magazine, The Oprah Winfrey Show, The Early Show, and the Today show were among the ones that spread her story far and wide. Most of those news outlets also covered her $1 million goal in 2004, which is when things really took off. People wanted to help her reach her goal—the generosity and outpouring of support is something I will never forget. It was an extremely difficult time for our family since Alex was getting weaker and weaker by the day, but the messages and support from so many were such a bright spot of hope for our family.

How much money did Alex raise with her lemonade stands? And what did that money help to do for other children battling cancer?

In her lifetime, Alex raised more than $1 million with the help of others. Her annual front yard stand raised anywhere from $2,000 to nearly $20,000. But it was the participation of others, who took up her cause and held their own stands that really helped her make an impact. We donated the first several thousand dollars she raised to fund research into her type of cancer, neuroblastoma, at her hospital here in Philadelphia. But as she raised more money, she said it was selfish and insisted that we fund research into all types of childhood cancer at hospitals across the country. I am embarrassed to say it now, but at the time I only wanted to fund neuroblastoma research because I wanted so desperately to find a cure for her. Looking back on it now, I see that Alex had a pure heart and a vision that was much bigger—in her words, “All kids want their cancer to go away.” She taught me the true meaning of being selfless in service to others. 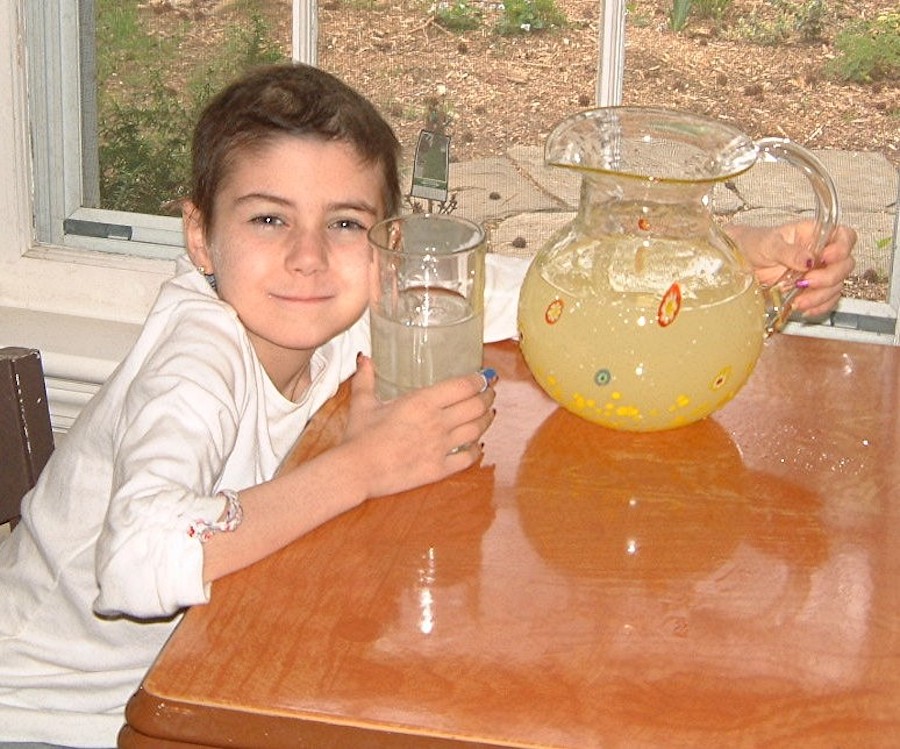 Since Alex’s passing in 2004, your family has continued her inspiring legacy through ALSF—please tell us about the foundation and your work.

My husband, Jay, and I were inspired by Alex’s legacy and felt a calling to continue the work she began. Alex’s Lemonade Stand Foundation became a non-profit organization in 2005 and has since grown into one of the leading childhood cancer foundations in the U.S. raising more than $200 million for childhood cancer research and better, less toxic treatment. ALSF has funded more than 1,000 cutting-edge research projects at nearly 150 institutions in the U.S. and Canada and provides emotional, financial, and logistical support to childhood cancer families through programs like SuperSibs and Travel for Care. In response to COVID-19, we created an emergency COVID-19 fund that has provided grocery relief to childhood cancer families affected by the pandemic.

What can our readers do to support ALSF’s important mission and help kids battling cancer?

There are so many opportunities to support ALSF! From hosting lemonade stands (you can also host virtual stands, online fundraisers, or drive-thru stands) to participating in our largest annual event, The Million Mile, each September (a virtual fundraiser that encourages supporters to collectively walk, run, or bike 1 million miles throughout the month) to getting involved with our new gamer program or making a donation directly to our website.

We make it easy and fun, with no minimum requirements for fundraising. We also have a special “Kids Corner” on our website with activities for kids and lesson plans for parents and teachers that incorporate Alex’s story into teachable moments. Alex taught us that every donation counts, and we continue to live by the idea that small gestures and donations can add up to big change for kids with cancer! 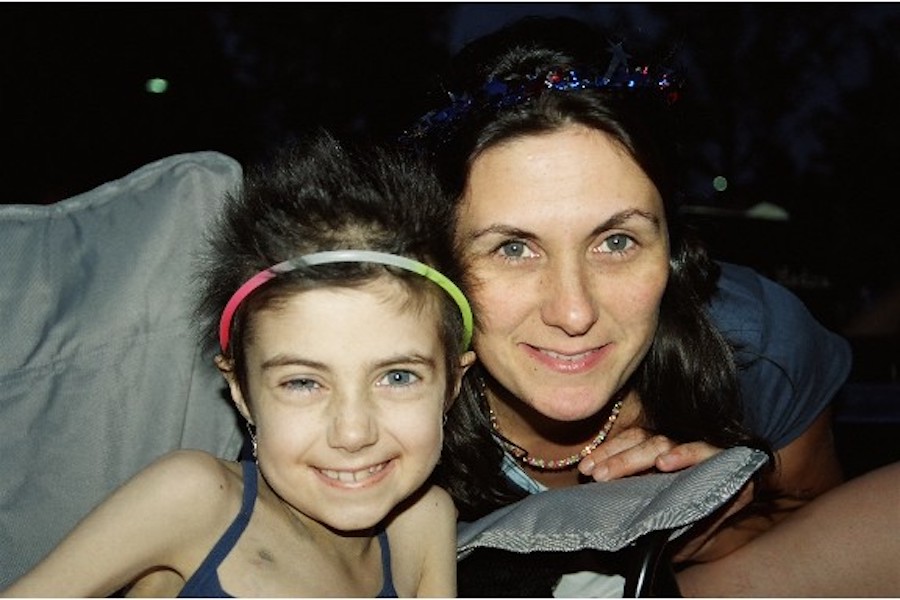 What do you wish other families knew about what it’s like to have a child diagnosed with cancer?

Receiving a childhood cancer diagnosis is life-changing and overwhelming for the entire family including parents, siblings, grandparents, and more. Every family reacts differently to a diagnosis—some embrace help from others while others feel more private and want to retreat.  The most important thing anyone can do is send kind thoughts, words of encouragement, and offers to help on the individual family’s terms. In addition, getting involved with organizations that help fund research and support families (like ours!) is a great way to show support for families whose children are battling cancer. It truly shows that you care and are willing to take action to help.  When families see support for childhood cancer causes in their community, it gives them so much hope.

We've been waiting for the black flame candle to b

Our budget-friendly fall capsule in action! Our co