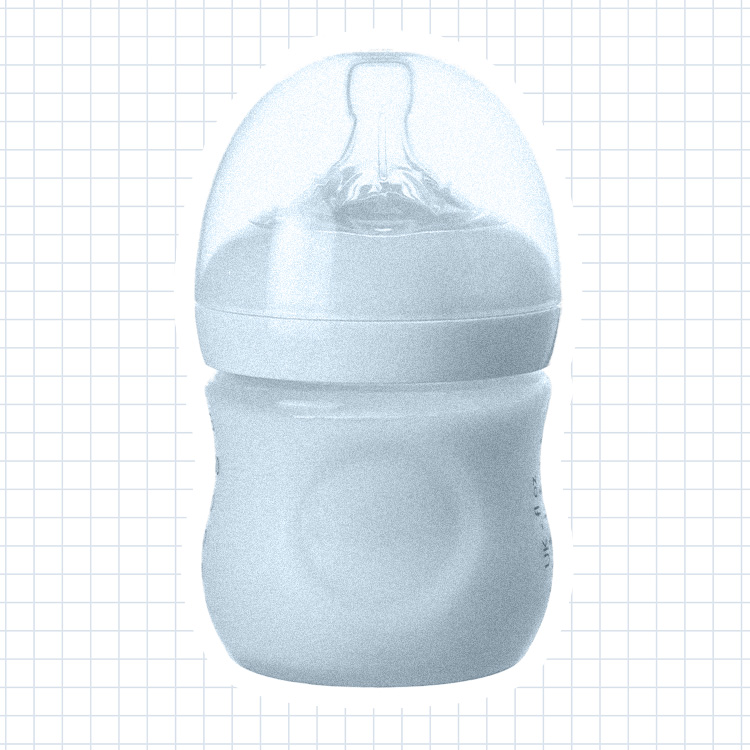 It’s hard to turn on the news lately and not be enraged by something. But for moms who’ve been shouldering the pandemic burden for years, the formula shortage feels like more than a pile-on; it’s—as one mom put it—”a five-alarm fire.” If you’ve found yourself questioning how society can say babies matter while staring at empty shelves where formula used to be, trust us, you’re not alone.

It was recently reported that formula supply is down 43% across the country. And, frankly, no parent should have to worry about how they’re going to feed their child. We reached out to Dr. Mona Amin, board-certified pediatrician, to help explain the cause of the formula shortage and what parents—and those who want to help—can do now.

Meet the expert
Dr. Mona Amin
Board Certified Pediatrician and mom
In this article
1 Latest Updates on the Formula Shortage
2 What’s Happening & Why
3 What are Other Formula Manufacturers Doing?
4 What Parents Can Do
5 How to Support Parents Facing the Shortage
6 What’s Next

Latest Updates on the Formula Shortage

According to a press release out Monday, May 16, “Abbott has agreed to enter into a consent decree with the U.S. Food and Drug Administration (FDA) related to its Sturgis, Mich., infant formula plant.” If the court approves the agreement, the plant could be running again in two weeks. From the time of restart, it would take six to eight weeks before product is available on shelves, prioritizing production of EleCare®, Alimentum® and metabolic formulas first and then begin production of Similac® and other formulas. In the meantime, the press release said Abbott will continue to import formula from FDA-registered facility in Ireland to help alleviate near-term supply shortage.

The FDA also made an announcement late Monday of new steps to allow more baby formula to be imported from other countries. The administration said it encouraged overseas manufacturers to apply to ship their formula to the U.S. Again, however, it could be weeks until this formula hits store shelves, to allow time for safety testing and correct labeling. According to an article in The Wall Street Journal, “the changed guidelines are a temporary measure valid for the next 180 days, said Susan Mayne, who leads the FDA’s food-safety division.”

There are several factors causing the formula shortage. “There have been supply chain issues in many industries and a shortage of labor as a result of the pandemic. [But] we saw some stock levels replenished within a matter of weeks,” Dr. Amin said. The formula shortage is different because it is the result of manufacturing company Abbott voluntarily recalling several formula brands including Similac PM 60/40, Alimentum, and EleCare after receiving consumer complaints (including the death of an infant) about Cronobacter sakazakii  and/or Salmonella  Newport.

While it was reported by Abbott that there were no traces of Salmonella Newport in the plant, traces of Cronobacter sakazakii  were found in different areas of their Sturgis facility in Michigan. This caused the Federal Drug Administration to temporarily shut down the plant to conduct an investigation.

Why shutting down one facility affects the formula supply so significantly

For parents wondering how the shutdown exacerbated the formula shortage, Dr. Amin said that “there are only five [approved] infant formula manufacturers in the U.S. that are closely monitored and have strict food safety protocols to follow.” In addition, there are only three companies that produce the formulas many parents have come to rely on: Abbott, Gerber, and Reckitt. “With Abbott being the largest of the three companies, making up about 40% of the market, the temporary closure of their Sturgis plant has caused a major disruption,” Dr. Amin said.

The FDA did its job by shutting down the Sturgis plant to make sure a formula recall doesn’t happen again, but “other manufacturers haven’t been able to make up for it,” according to Dr. Amin. She added that “the formula market is so small,” which means it is left vulnerable should something threaten it. In this case, the pandemic and the recall have done just that. 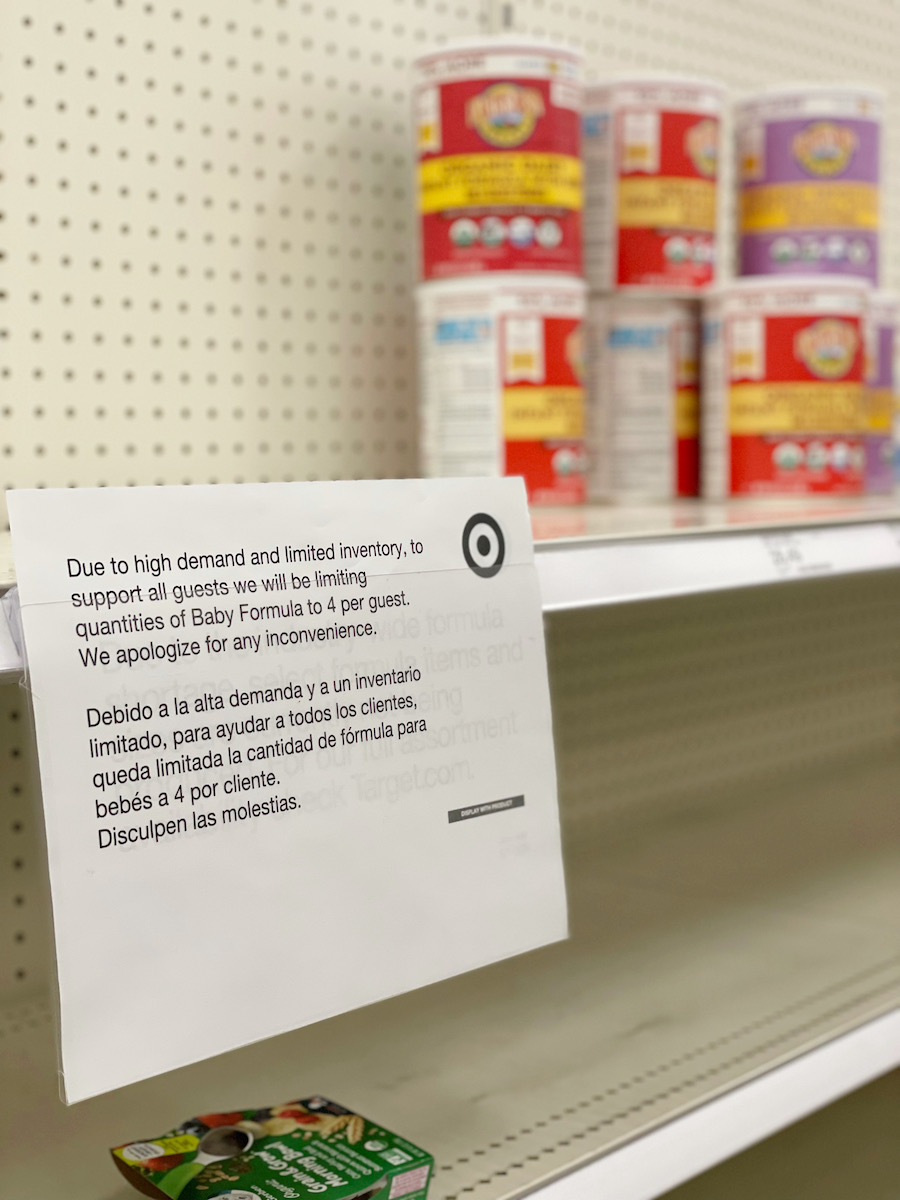 What are Other Formula Manufacturers Doing?

President Joe Biden met with large retailers (Walmart, Target, etc.) and infant formula manufacturers Reckitt and Gerber, along with the Federal Trade Commission and Justice Department, to discuss how to rectify the formula shortage. Formula manufacturers Gerber and Reckitt have ramped up production, with their facilities operating 24/7.

Additionally, according to an article in The Wall Street Journal, “The White House has also been working with Abbott and the three other formula makers to identify transportation, logistical and supplier hurdles to increasing production of formula at their U.S. and FDA-approved facilities.”

Until the Abbot facility is able to begin producing formula that is deemed safe to return to shelves, “the U.S. will increase baby formula imports in a regulated manner for safety,” Dr. Amin said.

Which retailers are imposing limits on formula purchases?

As stated above, some retailers are placing limits on how many cans of formula parents can purchase. The FDA requested that retailers limit the number of cans that can be purchased per person. Below are the current guidelines:

What Parents Can Do

Dr. Amin wanted parents to know that the formula shortage is currently based on region but will probably spread nationwide. Because of this, she recommended the following:

What not to do

How to Support Parents Facing the Shortage

To truly support parents who are affected by the formula shortage, we need to change the conversation around feeding infants. Statistically, the CDC states that 60% of mothers stop breastfeeding before they are ready, and only about 26% of babies are exclusively breastfed for their first 6 months. But breastfeeding is not the solution to the shortage. Breastfeeding does not always come easily and it is certainly not “free.”

Dr. Amin also acknowledged that aside from many women not having the support or resources to breastfeed—like paid leave, access to breast pumps, etc.— telling moms to rely on breastfeeding also erases moms who underwent a mastectomy, have glandular issues, have autoimmune diseases that require them to be on medication, or suffered from postpartum anxiety or depression, not to mention those babies who have specific dietary needs, are adopted, or have other reasons for formula feeding. It’s not helpful at any time, especially in the midst of a crisis, to suggest a mom or parent is the reason their child is unable to be fed.

It’s not helpful at any time, especially in the midst of a crisis, to suggest a mom or parent is the reason their child is unable to be fed.

Elizabeth, a mom with a 5-month-old baby in Michigan, shared her frustration: “The shortage is a huge problem. We went to Costco this week and there was literally none of any brand. There was only organic (more expensive) stuff at Target,” she said. “We have the resources to drive farther or pay more if this shortage continues, but it’s still stressful. To me, the biggest worry is for parents on a tight budget who can’t take off work to drive elsewhere to find formula—what are they going to do? The government needs to treat this like a five-alarm fire and they aren’t.”

For those who want to help, you can call your local senators and house representative to tell them to urge the Biden Administration to continue taking action.

I just called both my Senators (call (202) 224-3121 and ask to be connected to yours) and my House Rep (link below) and asked them to urge the @JoeBiden administration to act with the utmost urgency on this baby formula crisis. Hope you'll do the same. https://t.co/eCM6G2rNrz.

It’s encouraging to see the administration coming with solutions to the formula shortage, but seeing results on store shelves could take weeks. Babies need to be fed now. Elizabeth, a mom in Chicago, whose 3-month-old baby requires hypoallergenic formula, shared, “I’m relieved [the shortage] is finally getting press and government attention, but I also fear it will cause more panic and less availability.”

I’m relieved [the shortage] is finally getting press and government attention, but I also fear it will cause more panic and less availability.

We can all agree feeding babies is of utmost importance. It is clear that some policies need to be changed and new policies need to be implemented so that families are truly supported and valued in this country. We cannot live in a society that, again, emphasizes how important the lives of babies are while simultaneously showing otherwise. No one deserves to worry about how they’re going to care for their children regardless of their circumstances. Parents, caregivers, and babies deserve more.

This article was originally published on May 16, 2022, and has been updated for timeliness.