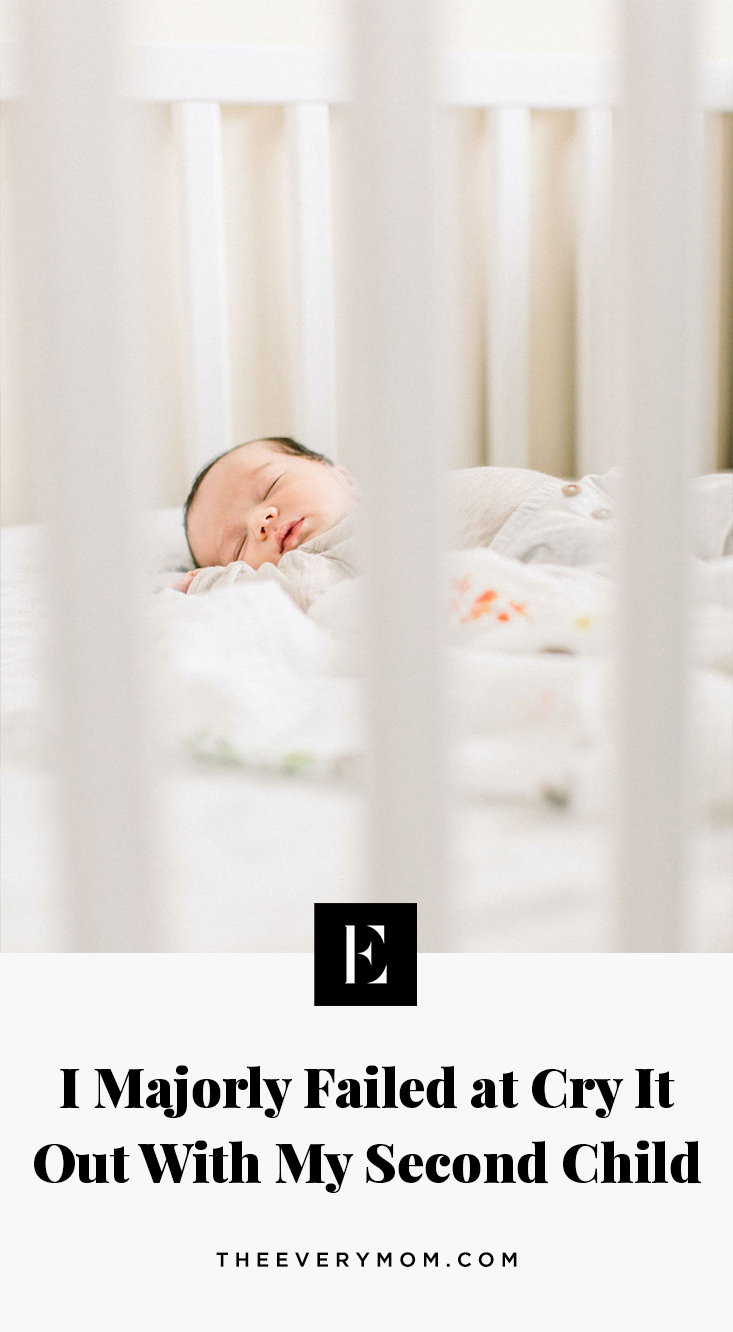 Before you have kids, you have all sorts of preconceived notions on how you will do things and how you will succeed at all things parenting. Your little one will eat everything and anything, you’ll conquer potty training before you’re even close to their 2nd birthday, and sleeping? Your baby will sleep through the night within a couple of months of birth; you won’t be dealing with any of those silly bedtime battles you hear your friends vent about.

And then you wake up from that pre-children fiction-filled fantasy.

My two baby boys brought me back to reality, each in their own individual ways, but nothing really rocks your world, or your sense of pride, like sleep.

We felt we crushed the whole sleep training thing with our first baby, Bode. Friends of ours swore by the book Healthy Sleep Habits, Happy Baby, and it became our bible. Helping our little guy get as much sleep as he needed was a top priority, and we sacrificed whatever was necessary to deliver.

And whether it was our effort, pure luck, or a mix of both (most likely), deliver it did.

Bode said goodbye to the middle of the night feeds before 3 months old, and when we took the pacifier away (cold turkey) at six months, we saw the light at the end of the tunnel. It was then that we did the “cry it out” method with Bode and, ultimately, had success. Like many new mothers, the idea of letting my precious baby cry himself to sleep, night after night, left me in anguish, but I had faith in the research done, saying that this approach wasn’t damaging in any way. And I had hope in the results, so I stuck to it. And looking back, I feel that it was totally worth it.

My two baby boys brought me back to reality, each in their own individual ways, but nothing really rocks your world, or your sense of pride, like sleep.

He has rough patches from time to time (usually sickness or major transition-related) like any child, but overall, Bode has continued to be a great sleeper. We have a sweet and steady bedtime routine. He snuggles as I sing a couple songs before I leave the room, and on average, he sleeps for the next 12 hours. If he wakes in the middle of the night, he can usually put himself back to sleep, or needs just a little reassurance (AKA a hug or back rub).

Things can change in an instant with kiddos, and I’m not that naive to think that we’re totally in the clear for the next 16 years. But I do feel very secure in the foundation we created with Bode and his ability to self-soothe and sleep. 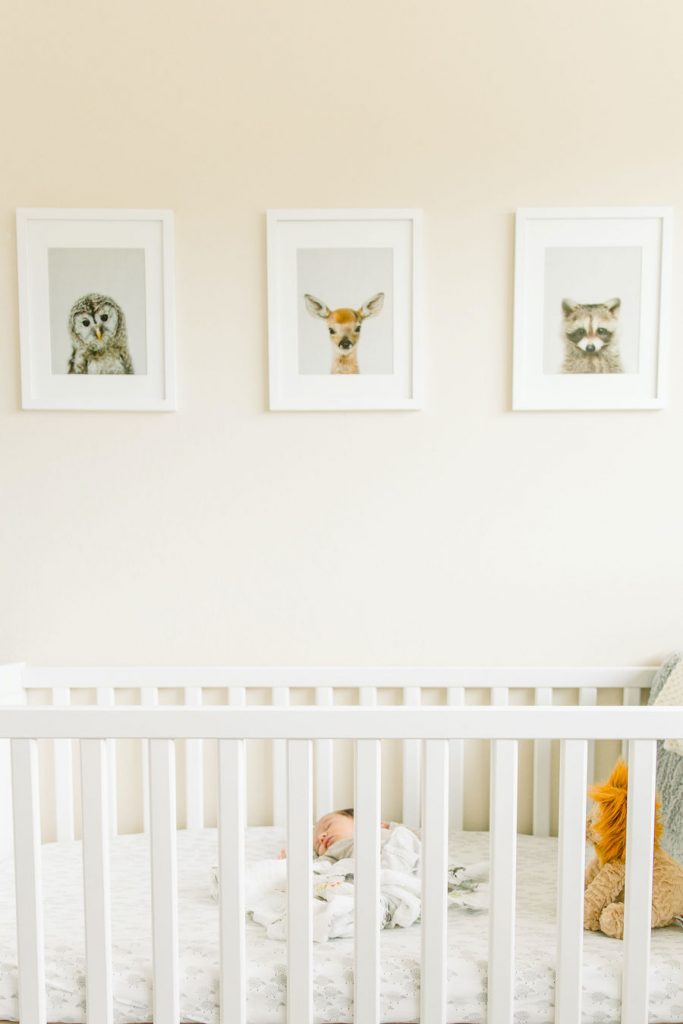 With this “success,” when baby #2 came around, we figured we’d do the same thing and get the same results.

As a second baby, from the start, Otis entered a world that was very different from the solo baby reality his brother faced. Simply put, we didn’t have the luxury of carving out our days to serve Otis’s sleep schedule like we did with Bode. Our incredibly active Bode still ran the show for the most part, in the sense that he still had his activities to attend, his routine to stick to, etc. So whether by car seat, stroller, or Solly wrap, little Otis came along for the ride.

Even when at home, his naps were often disrupted thanks to the giggles, squeals, and screams of his older brother.

I wasn’t concerned during those early days. While those first few weeks and months of newborn life are filled with little sleep and structure, I personally find it freeing to not worry about timing or schedules of any sort at that time – and most sleep experts advise to not worry about “training” until at least six weeks of age. So while I was exhausted, I loved that it wasn’t time for me to be concerned with setting the stage for Otis’s sleep training just yet.

With this ‘success,’ when baby #2 came around, we figured we’d do the same thing and get the same results. HA.

But as Otis got older, we began our plan to kick start our sleep training with this new little guy. We planned on becoming stricter with naps and nighttime sleep, and after a couple of months, we planned on letting him cry it out.

But this time around, it wasn’t going to be as straightforward as I had envisioned.

It seems obvious now, but I hadn’t really considered how we’d let Otis cry it out … without waking up his older brother. So, we started letting him cry a bit, but not too long or too loud. We’d go into his room and try to soothe (AKA quickly quiet) him if he became too disruptive. Bode had cried when sleep training of course, but never like Otis; his set of lungs was a whole new beast to us. To this day, this child can scream a bloodcurdling scream.

And so began our never-ending on-and-off attempts to get Otis to sleep through the night. 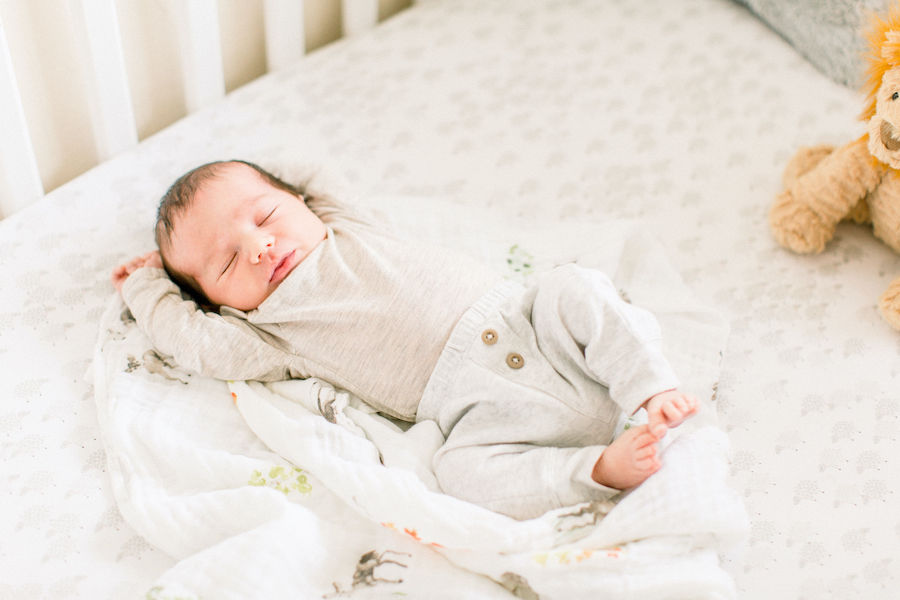 First was the “don’t get too loud and wake your brother” dilemma. Then were pauses in the training because of sickness and dealing with Otis’s sensitive belly and digestive issues.

Next on the sleep training situation list was travel. Every time we traveled, any progress we’d made at home, was set back several steps each time. When we were away from our own home, we’d comfort Otis within minutes of fussing, for fear he’d wake the whole house where we were staying. Flying across country meant changing time zones, totally wreaking havoc on his already fragile schedule. Traveling on airplanes usually led to colds, and with that, we were back in the cycle of messing up any and all sleep training attempts.

So whether due to volume of screaming, sickness, or traveling, our training wasn’t working. And then there was plain old exhaustion. Otis would wake and cry, and my husband and I found it much easier to just feed him and go back to sleep instead of listening to him fuss forever and risk him possibly waking Bode, where we’d then have two upset baby boys.

I felt like it was my fault. I wasn’t ‘strong’ enough, I was giving in too quickly, I wasn’t a good enough mom.

I’m well aware that you’re probably thinking he simply wasn’t ready, he still needed those feeds. There was a part of me that struggled with this belief. But Otis was only finishing those bottles that we’d give him about 50 percent of the time. It was becoming very clear that it wasn’t the formula he needed; it was the comfort.

Otis was approaching the 9-month-old mark and still not sleeping through the night. I felt almost embarrassed to admit this to fellow moms, especially after Bode’s so-called sleeping success. But there was no denying it: second time around, I was majorly failing at crying it out and at sleep training overall.

I felt like it was my fault. I wasn’t “strong” enough, I was giving in too quickly, I wasn’t a good enough mom. I took that sense of pride I had developed in myself from Bode’s sleep routine and lost it all.

Exhaustion makes you feel pretty crappy, and when you add together my pregnancy, where I was usually up every couple hours to use the bathroom or in plain discomfort, and the past nine-plus months with Otis and his middle of the night feeds, I hadn’t slept through the night consistently for over a year and a half. 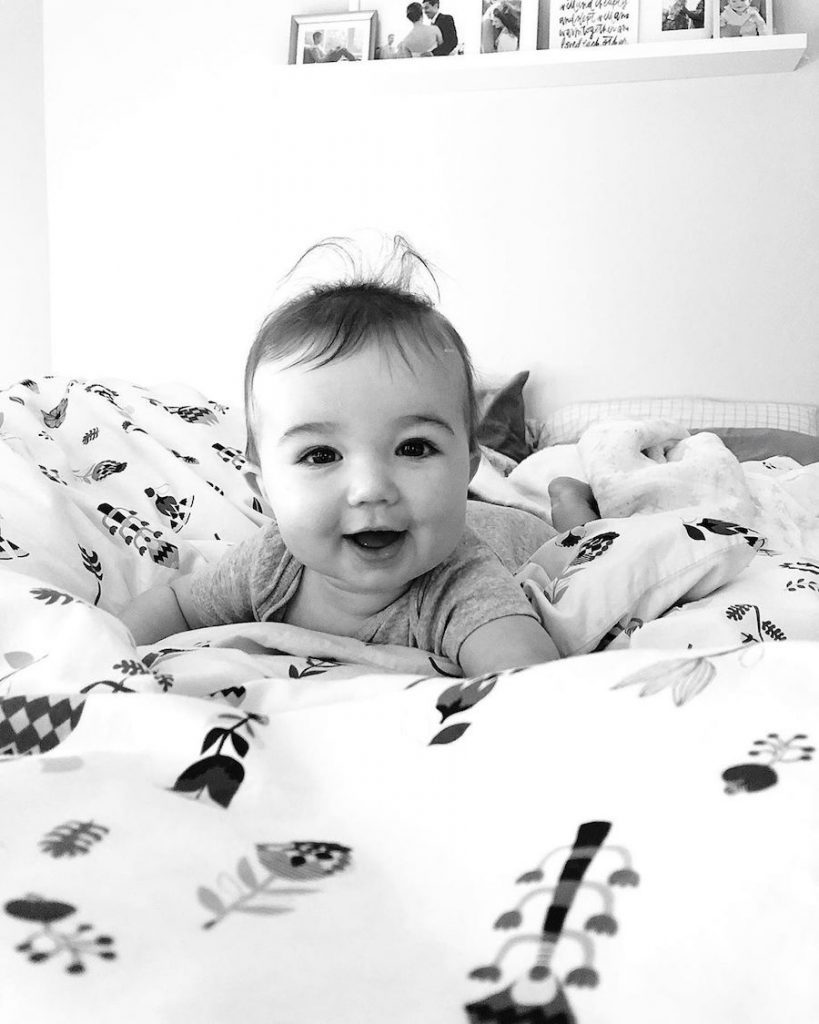 So, we decided to just stop.

We stopped trying; we were too tired. If Otis wanted/needed/craved a little pick-me-up in the middle of the night, I was going to give it to him — bottle, hug, whatever. Because babies don’t keep and mama is sick of trying.

So, we entered the fall season and focused our energies on other things. Bode started preschool, we all got sick with endless colds that led to more wake-ups at 2am, and it was all OK. We survived. I drank more coffee, and I gave more hugs, whatever time of day they were needed.

Two weeks before he turned 1 year old, Otis slept through the night solidly. It was my birthday to be exact, and it was a fabulous birthday gift. He’s been sleeping somewhat soundly since. He still wakes at times and protests his displeasure to the whole house with his strong vocal cords, but for the most part, we let him go. He usually goes back to sleep eventually, and we’re slowly but surely getting into a better bedtime rhythm in the house. I’m well aware that we’re not set for smooth sailing forever, but we’ve turned a corner and it feels really good.

We stopped trying; we were too tired. If Otis wanted/needed/craved a little pick-me-up in the middle of the night, I was going to give it to him — bottle, hug, whatever.

I felt like I had failed at sleep training my second son. Maybe I did. Looking back now (a bit more well-rested), I’m actually glad that I “failed” though. By doing so, Otis trained me that sometimes “giving up” and failing is what is needed to really learn a lesson. And I needed to learn to let go, that we can try to train and teach our children as much as possible, but ultimately, it’s not up to us. Otis may have been a baby, but he was still his own person with his own timelines and paths.

So to Otis, I say thank you. But sweetie, please keep on snoozing.