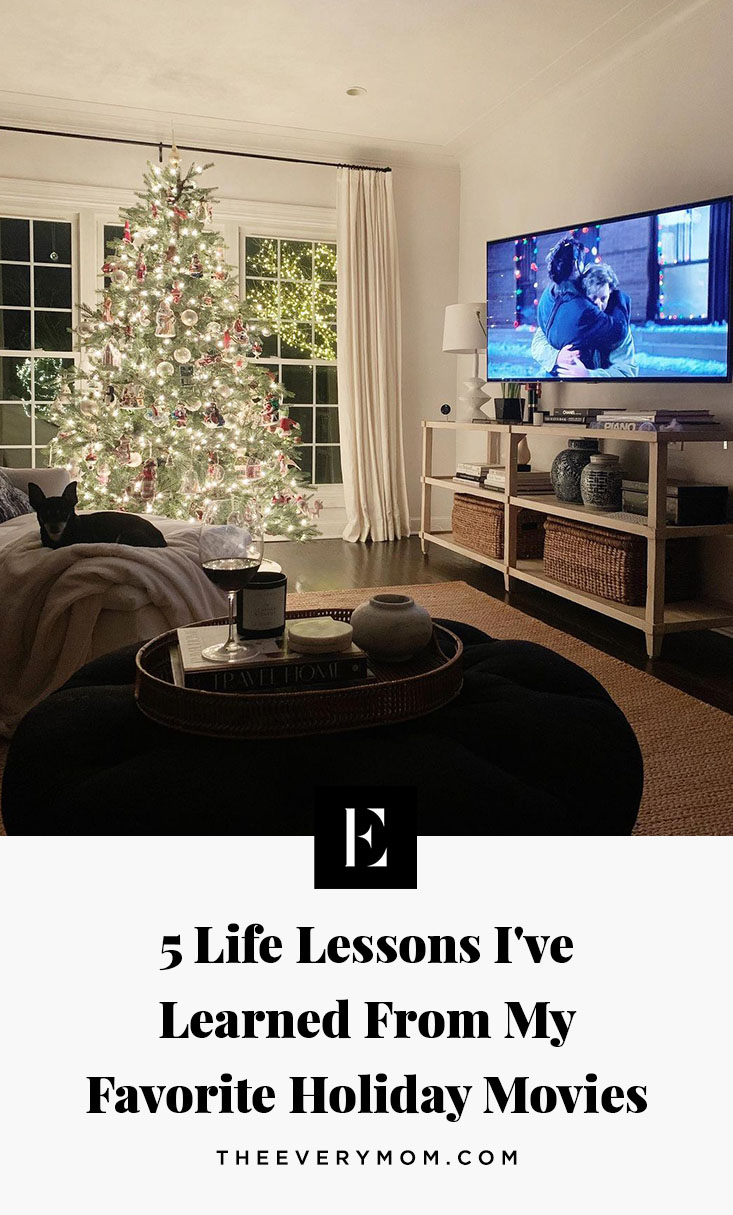 Winter is always the most magical time of year for me. It’s a time of hot drinks, baked goods, and holiday movies (often with hot people galore). But also, a time for me to reflect on the year and think about what I’ve learned, naughty and nice. Nothing drives a point home harder for me than seeing it on the big screen. And I find it’s way easier to learn the lesson by watching someone else go through it. Less pain, more gain, if you know what I mean. Here are some of my favorite lessons over the years, and the holiday movies that made them possible.

1. While You Were Sleeping

I love everything Sandra Bullock touches (Practical Magic, The Proposal, Miss Congeniality), so it’s no wonder that I have watched this movie on repeat. Of course, it also helps that Chicago is now my home, and this movie shows the Chicago I know and love (the courtyard apartment buildings, the el!, etc.).

Our lives may not look like we thought they would, but it’s important to take risks and chances and put ourselves out there.

When Lucy saves her comatose crush from being crushed by an el train, a slight misunderstanding leads to his whole immediate and extended family believing that she is his fiance. And hi-jinks ensue! Most importantly though, I love the message at the end: our lives may not look like we thought they would, but it’s important to take risks and chances and put ourselves out there. We never know what we’re going to get. And maybe you might just get a chill Bill Pullman instead of a snooty Peter Gallagher! Worth the risk.

Where to Watch: Amazon Prime Video and AppleTV

As you keep reading this list, you’ll realize I learn best when there’s a comedic heroine. And Kristin Chenoweth does not disappoint. Instead of uprooting my life in a big city to move to the boondocks, I let Kristin do it instead. Small-town life is much more exciting than I previously thought, especially when there is a really hot rescue squad that needs fundraising skills.

So much is lost in translation and we would do better if we talked about our own feelings and stopped making any assumptions about anyone else’s.

When Kristin’s job in NYC as a big-time PR person and engagement all implode on the same day, she decides the only remedy is to move to a small town in Montana and head up PR for their tourism department. In terms of lessons, the importance of communication was crystal clear in this Pride and Prejudice update. So much is lost in translation and we would do better if we talked about our own feelings and stopped making any assumptions about anyone else’s. Oh, also if a love interest is named Wickham, run.

Sometimes you need a comedy just full of some heavy hitters (even if it’s a bit hokey). Christine Baranski, Susan Sarandon, and Cheryl Hines were incredible foils to their younger counterparts: Mila Kunis, Kathryn Hahn, and Kristin Bell.  Each of the Bad Moms’ mothers arrives on their doorsteps at the beginning of an already chaotic holiday season, throwing each of their lives into further chaos.

As a mom, you get to set the tone in your house, and you can do that by asking for boundaries—respectfully.

One of the bits of chaos led me to learn that there are contests for stripping Santas. I didn’t know about that side of Christmas until this movie, so this movie was both entertaining and educational. You can’t beat that. The message of this movie was also entertaining and educational: as a mom, you get to set the tone in your house, and you can do that by asking for boundaries—respectfully. And if you do it badly at first and destroy your house by accident, your friends will always have your back.

OK, you caught me, this is another Pride and Prejudice update. It’s a classic trope for a reason, so I stand by this pick. You may also argue that this is not a holiday classic, but I will push for it because some of the best scenes take place in the snow and feature the best ugly holiday sweaters. Point won.

We are most loved as our honest, heartfelt selves.

If you don’t know the plot, Bridget starts a new diary with the start of a new year vowing to make this year better than the last. She struggles with binging food, booze, and men. This is the year she conquers it all! While I don’t love the toxic diet culture aspects of this film, I do love seeing her human self always messing it up as she struggles to figure out what the best version of herself actually is. And at the end of the day, the lesson learned is that she is most loved when she is her honest, heartfelt self. And sometimes men just wear ugly holiday sweaters because they love their mom so damn much.

Musicals at any time of the year are pretty amazing, but the holiday ones just kick it up a notch. Freshen up your caroling favorites by watching The Mistle-Tones. In this ABC Family holiday musical, Holly is itching to audition for the Snow Belles, a holiday caroling group that her mother once was a part of. After losing her spot due to bad luck and politics, she decides to create her own group and win the holiday concert. Who could want more: holiday songs, rivalries, and falling in love? Sign me up!

Holding onto our old ideas for the sake of history could make us miss something really important that is right in front of us.

My favorite aspect of this movie, besides being able to predict every jolly moment, was the gentle reminder that holding onto our old ideas for the sake of history could make us miss something really important that is right in front of us. It’s OK for life to evolve over time and, with it, traditions. It doesn’t make them less important or special, just more customized for who we are now. And you don’t have to give in and move halfway across the world because your crush did. If you stay put, they still come running.

What are some of your holiday go-to movies and what lessons do you hold dear? Share them with us!