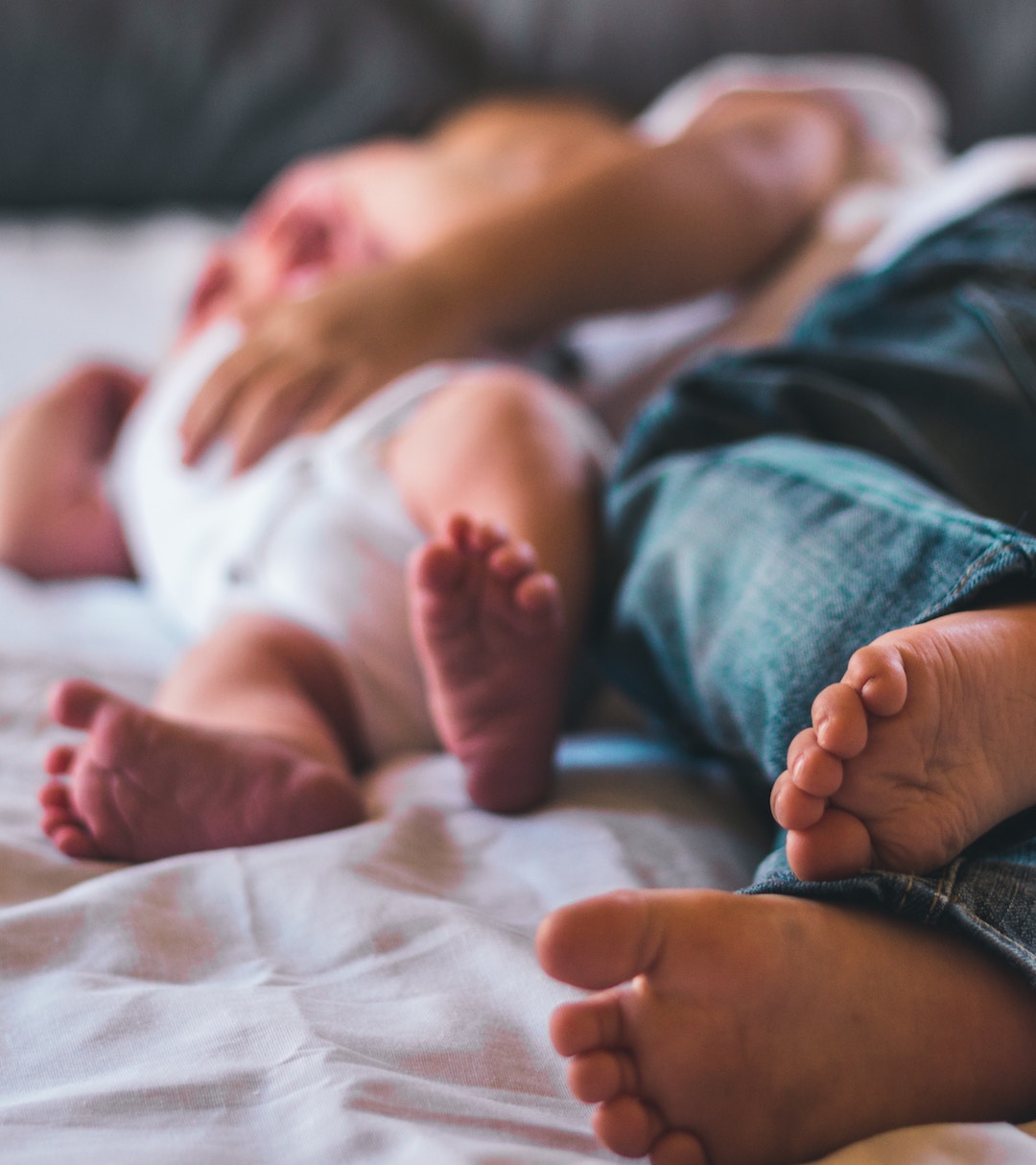 My son, Brooks, was an angel baby. He slept well, ate well, played well. My husband and I thought we hit the baby jackpot. It seemed like we blinked and he was eating solids, crawling, babbling, and sitting up – all without any issues. We knew that we were good parents, but we also knew that we had a good kid we had on our hands.

Then, we got cocky.

“Maybe we should start thinking about having another baby?” I asked when Brooks was barely eight months old. Later that week, we sat next to a couple at a wedding reception who had just had their second child 18 months after welcoming their first. They went on and on about how wonderful it was. We basically lit a green light for baby number two that night, and just a few weeks later I was looking at a positive pregnancy test.

We were ecstatic – we were going to have two babies just 18 months apart! As we geared up for another 10 months of pregnancy, a seedling of doubt and guilt started to grow in my mind: Are we robbing Brooks of his special time with just his mom and dad? Is it too soon? Will he be ready? We always made ourselves feel better with, “Don’t worry –  I’m sure they will be best friends!”

Before we knew it, we were welcoming a chubby, new baby with the roundest head I have ever seen almost 18 months to the day since we welcomed our first. Once the meds wore off, it was time to introduce Brooks to his baby brother. He was so young, I really wasn’t expecting much of a reaction. But, boy, was I wrong.

Brooks’ lack of reaction spoke loudly. For the first few months, Brooks didn’t give the new baby, Vance, any attention. I’m sure he was silently grateful for the extra Bubble Guppies that he got to watch while I nursed, but otherwise, he was uninterested.

We did our best to encourage interaction slowly. Brooks was learning body parts so we would suggest he tickle Vance’s toes or boop his nose. The few times Brooks even decided to give it a shot ended in a look of disgust.

Brooks’ lack of reaction spoke loudly. For the first few months, Brooks didn’t give the new baby, Vance, any attention. I’m sure he was silently grateful for the extra Bubble Guppies that he got to watch while I nursed, but otherwise, he was uninterested.

Eventually, Brooks started to understand that the new kid was a permanent fixture, but that didn’t change his feelings towards him. We continued to encourage interaction but Brooks was getting bigger and able to run away and scream or grasp his dad’s neck in protest with what seemed like the strength of a pro wrestler.

I stayed up crying for weeks thinking that I had done something wrong to both of my boys. I felt that I robbed them both of the special sibling bond that I had dreamed of during those 10 months that I was carrying Vance. I was at fault, I thought, and the mom-guilt grew.

As Vance developed physically, we started to see a small shift in Brooks, too. Brooks started to sit closer and get more curious as to what Vance was all about. But, largely, there was still a lack of interaction that didn’t live up the Pinterest-perfect bond that I had in my mind for them. Naturally, I took to Google.

But, instead of falling down the message board rabbit hole, I took a step back. I thought about the situation without getting my emotions involved.

These were the facts:

What I realized by just shifting my perspective a little bit, is that I was the only one putting pressure on my boys to bond. There was nothing actually wrong with the situation. It wasn’t what I had imagined, but at the same time, they are both so much more than I could have ever dreamed. When I take a step back, I really can see just how young they are, and even though they likely had no clue, the pressure that I put on them was unfair.

I now compare their sibling relationship to that of a married couple. There are life moments that present any couple with the opportunity to either grow together or grow apart.

What I realized by just shifting my perspective a little bit, is that I was the only one putting pressure on my boys to bond. There was nothing actually wrong with the situation.

I have seen these moments become more frequent in the past three months. Vance is now waving, saying a few select words, cruising, and becoming a toddler. With these developments, Brooks has taken a marked interest in what the baby is doing. “Cute baby go night-night?” is a commonly heard phrase in our home in addition to, “Here you go, cute baby.”

Their brief interactions are the sweetest prelude to a future bond.

We have also continued to do our part to help them interact more. Every night, Brooks hugs the baby, tells him he loves him, and closes the door of his bedroom. Little repetitive actions like this have made Brooks realize that Vance is an important part of his family (and that the kid is here to stay).

Now that Vance is just about walking, I sense that the life moments that presents them with the opportunity to grow together are coming soon. Brooks loves to chase and be chased. Once his brother is able to play that game, I imagine that they will be inseparable.

If that doesn’t happen, I will still be there to encourage their own unique sibling love story, and I know now that they have the course of a lifetime to build it.

Here are our tips to gently encourage bonding:

When your older child is engaging fully in something they love, encourage them to extend the olive branch to the younger child. For example, my older son loves his cars. If I see him really enjoying himself, I ask him to hand his brother a car. They don’t have to actually play together but choosing a time when your child is happy and enjoying themselves to encourage bonding ends in fewer tears.

But don’t use it as a threat

Hold off if either child is really struggling with sharing.  Of course, very young children don’t understand the concept of sharing. But, if one child has sticky fingers or grabs at every toy, an older child could see that as a threat to their fun.

Pick one routine that they do together every day. As I said, Brooks helps put Vance to bed and they both love it (and so do I).

Make them both laugh at the same thing.  Pull out all the stops – hats, crazy dances, falling down – whatever it takes to get them both laughing. It’s a subconscious connection.

Play next to each other, if not together

If all else fails, start encouraging them to just be in close proximity. They could be doing completely different activities, but if they’re together that counts as a win.

How did you encourage sibling bonding between your kids? Share your tips in the comments!