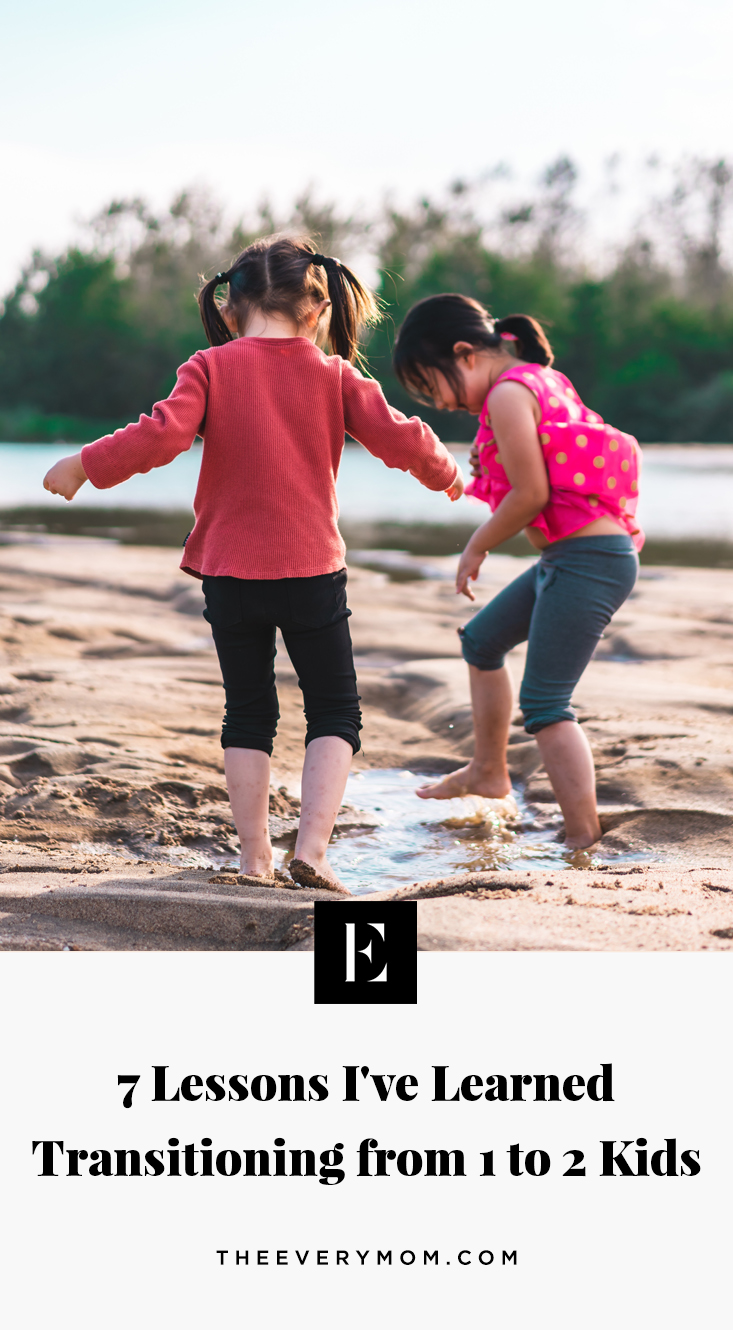 Before I had my second child, I asked every parent of two kids to tell me the truth — was this going to be harder or easier than the shift from zero to one? Because in my head, it seemed equal parts thrilling and terrifying, a balance magnified by the addition of another little person to our family. These feelings were soon validated. “Two is easier because you know what to expect,” explained one fellow mama. “Your first baby changes everything, but the second is a cakewalk,” said another. In contrast, a close friend replied via text, “It’s utter insanity,” and my own mother gave one of those ominous just you wait laughs before telling me that no, it would be fine.

However, now that I’m a solid six months into the two-kid game, I get it. That saying about your heart walking around outside of your body? The meme of your brain having too many tabs open? Both true, times two. On any giving day, parenting multiple children knocks me on my ass and then sends my soul soaring, and frankly, I wouldn’t have it any other way. Here are seven of the biggest lessons I’ve learned along the way thus far:

My first son taught me the meaning of tired (and made me longingly recall my pre-motherhood self, who lazily slept in every weekend morning and took a good night’s sleep for granted). My second son taught me to appreciate any snooze window I could get, because the sheer exhaustion hit an all-time low. For me, lack of sleep over several months easily serves as the most physically difficult part of early baby life.

I’ve become that mom who goes on and on about the same thing, over and over: a detailed list of exactly how many times I got up the night before (someone had a nightmare, someone needed the boob) with an eye toward when I can nap next. I have full-on mommy brain; it’s like my mind is a faulty Garmin device that keeps intoning about recalculating when I take a wrong mental turn — which is often. I’ve put milk in the pantry and go upstairs only to forget why I went up there in the first place. Bleary-eyed, I’m fueled on coffee and sugar, like the Instagram t-shirts say, and if I’m lucky, the sexiest words my husband can say are, “Honey, I’ll get up with the kids.”

The good news? All kids sleep eventually, and babies don’t keep. I know these things to be true, which makes it easier to suffer through the long nights in exchange for sweet baby cuddles. 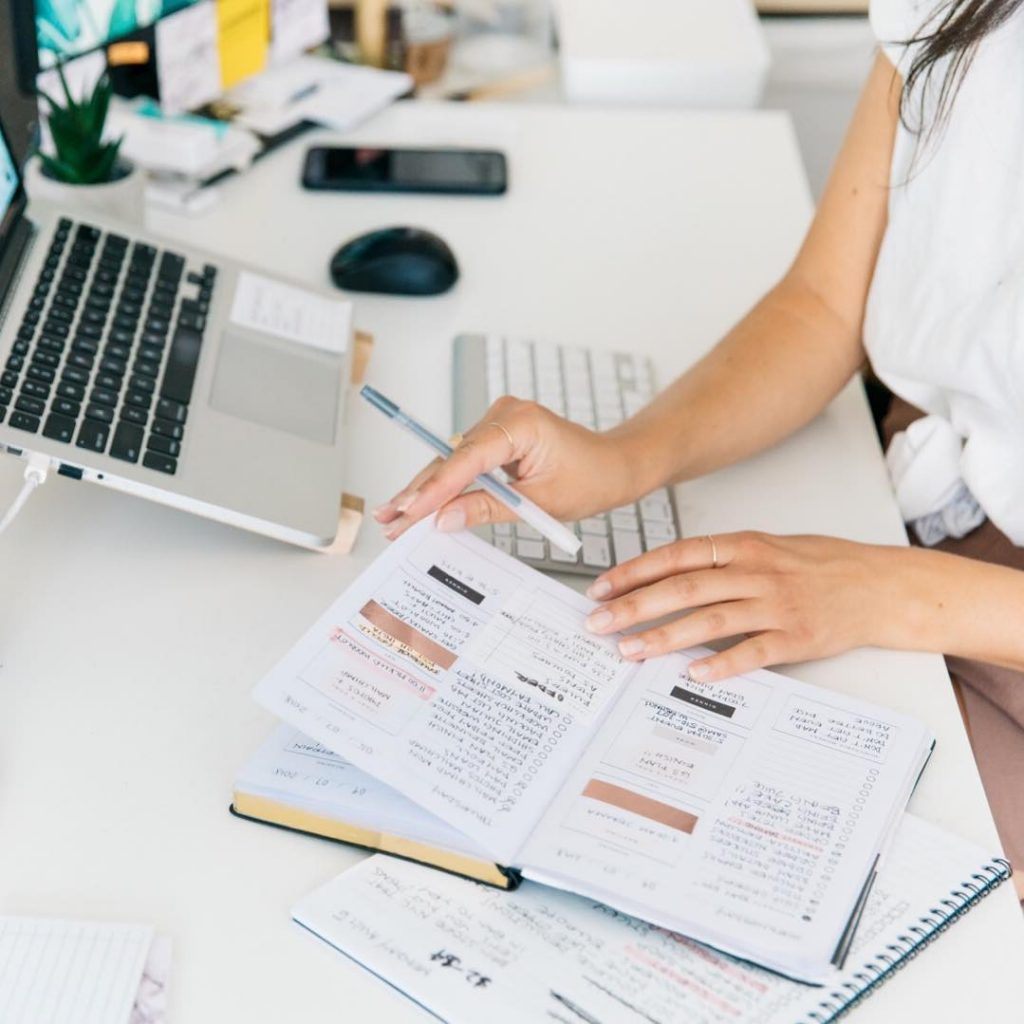 I learned to multitask, well, everything.

As I try to write parts of this essay, the theme song from Word Party blares in the background, a little hand tugs at my hip asking for another snack bar, my husband shares tidbits from his day, and I glance at emails half-answered on my phone — all while spooning sweet potato mash into my other baby’s mouth as he immediately grins and spits it back out, and I’m wondering what the heck we’re going to eat for dinner.

It’s… a lot, and a second baby lengthens the list of everything you’re attempting to accomplish, as well as the laundry, the dishes, the doctor’s appointments, and so on. This means every moment tends to be accounted for: I return phone calls and schedule calendar reminders in between work meetings. I tackle freelance writing assignments in a stolen half hour before bath time while my husband runs points. I listen to podcasts in the car, since reading books doesn’t happen as much as I’d like. I breeze through a yoga workout in the basement after daycare pickup while Thing No. 1 plays with his train set and Thing No. 2 blows bubbles laying on his back under my down dog.

And some days, I don’t do any of that, which is totally fine. I’ve learned to maximize my time, figure out my most efficient rhythms and give myself a ton of grace for the days where I can’t keep up.

I’m quicker to identify what I do and don’t care about.

I’m going to let you in on a secret: the first time around, I ultimately felt like myself at some point. The mom version of myself, but myself nonetheless. I hustled hard, held onto my creative priorities, enjoyed date nights with my spouse, worked out regularly, traveled solo, and snagged a career promotion. My to-do list got marked off every day. I ate vegetables. I responded to texts and emails within 24 hours. And I always had clean underwear, you know?

Fast-forward to now. I just straight up don’t have the energy for all of those things, at least not in the same week. My priorities, and my standards, have changed — and I own that fact completely. I used to raise an eyebrow at the mama in the store wearing stained pajama pants without a shred of makeup on, calmly ignoring the screaming kid laying in the middle of the aisle behind her. These days, I bow down. I see you, mom who doesn’t give a f*ck, and I salute you.

Because I know parenting, no matter how many kids you have, is actually all about identifying what you care about and what you don’t. I care about eating one green thing a day, exercising in 15-minute increments, drinking a beer with my husband before we rally for bedtime, and staying connected with my closest friends and sisters. I don’t care about birthday party favors, spotless floors, or perfectly folded laundry. I care way less about what people think of me, and much more about what’s best for myself, my marriage, my kids, and my family unit. 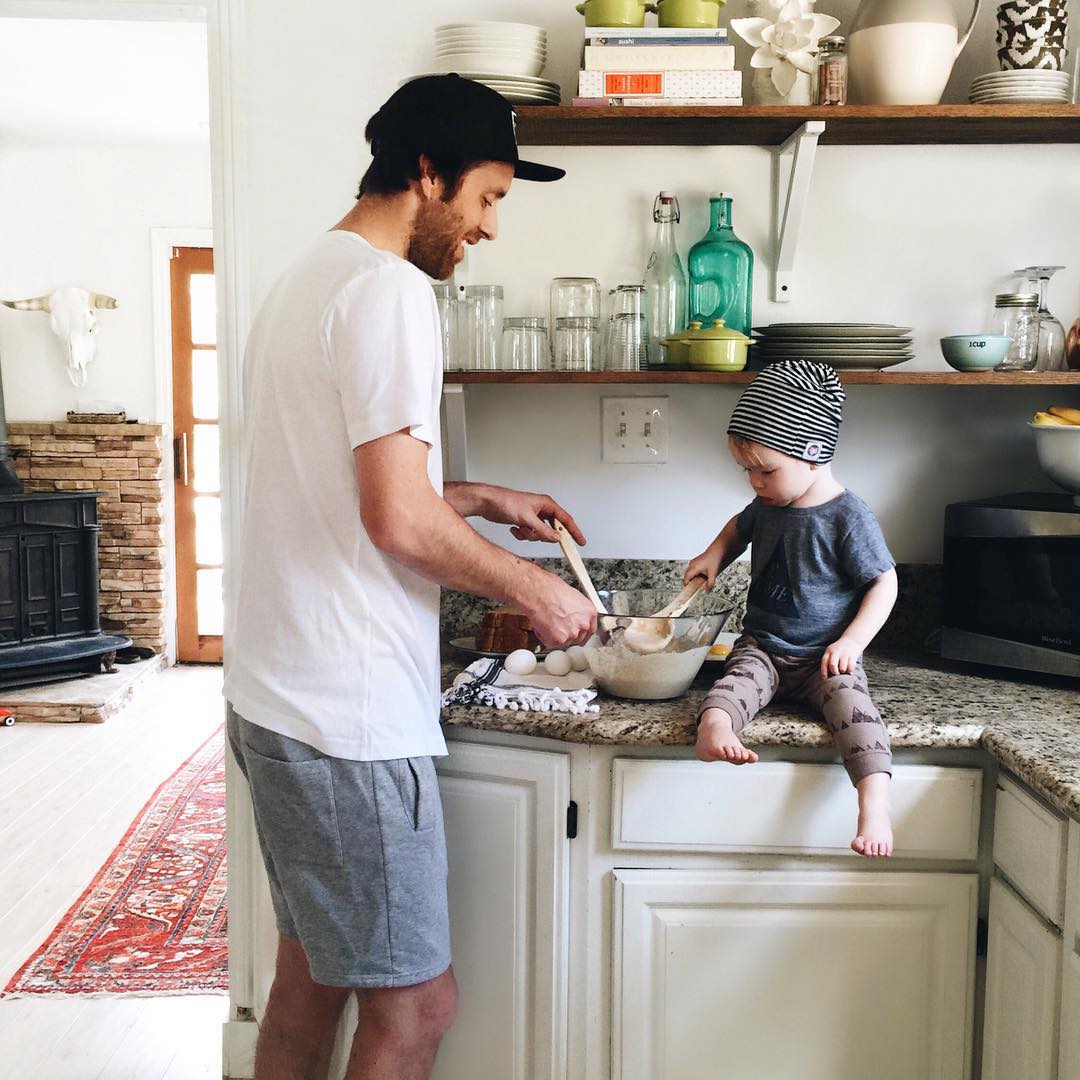 Some relationships fall off the grid.

One of my best friends from college recently emailed me to catch up, and it took me two weeks to respond to her. Another time, someone suggested getting together for coffee mid-afternoon on a weekend, to which I was like, “In my dreams, yes; in real life, that is prime naptime real estate.” I consistently write down names of people in my planner that I need and want to reconnect with, and my husband and I joke about being ships passing in the night.

What I didn’t realize before having two kids is that my desire to nurture relationships hasn’t disappeared. It’s just become an acute issue of prioritization; meaning, I’m constantly faced with a trade-off: every single thing I choose to do means giving up something else vital. On the relationships front, in both friendships and marriage, I have to be strategic and intentional. An hour on the phone with a friend during naptime means no workout; traveling to visit a friend means putting extra child care on my husband. This doesn’t include the pure unpredictability of parenting, either — like when your kid pukes right before you’re about to walk out the door, and your only option is to make peace with the chaos. Your ride-or-die friends, whether they’re parents themselves or not, will adjust right alongside you.

Self-care is twice as difficult, but twice as important.

Although downtime is harder to carve out once you have two kids, it also feels a little harder to justify, even though it’s more crucial than ever before. For example, I wake up earlier than my children a couple mornings a week in order to have some “me” time before the rush of the day. And almost every time my alarm goes off, I immediately think of all the things I “should” do first — prep the crockpot, wipe down the counters, answer a couple of work emails. It’s more challenging to make choices that nourish my body, mind and spirit; such as taking a hot shower, slowly sipping a cup of coffee in the quiet predawn hours, or reading a few chapters of a book.

The costs of skipping self-care are high, though. When I don’t make time for myself, I pay the price; I’m short-tempered, more judgmental and irritable, less inclined to be patient with anyone who crosses my path. Parenthood means you’re confronted with relentless neediness — sometimes I’m genuinely shocked by how relentless it is — and without some modicum of a self-care practice, you’re more likely to sink than swim. 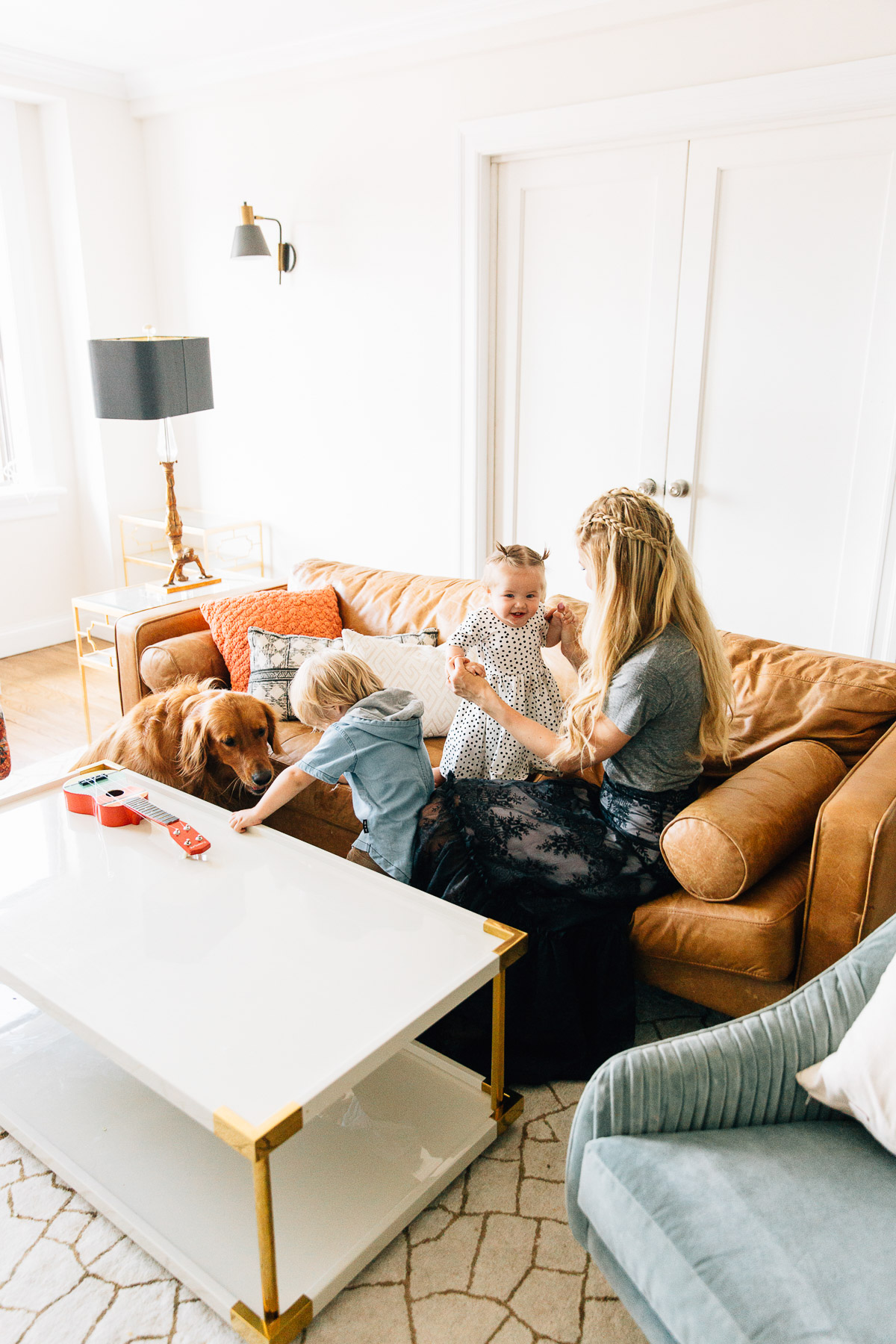 You’ve done this before but you also… haven’t.

One refrain from parents of multiples? Reassurance around the experience of familiarity, the whole “you’ve done this before, you’re good!” mentality. To which I say: you’ve done this before, but you also haven’t done it with this other child who has a personality all their own. What works for one kid doesn’t always translate for the other. Not only that, you’ll forget a lot of things! Seriously, some of the stuff I obsessed over with Kid No. 1? I legitimately do not remember what we did, and I’m still Googling things at 3am, like “what to do for baby acne.”

It’s all a phase.

I repeat: everything is a phase! The good, the bad, and everything in between. On challenging days full of toddler tantrums and multiple outfit changes due to spit-up, I remind myself of this fact. With your first kid, it sort of seems like everything takes forever, but the second go-around, you realize just how quickly time passes, for better or worse. Two kids often means twice as many hard parts, but it also means twice as many magical opportunities to watch the little people you love learn and grow.

Do you have a little one turning 4 this year? We'v

All the motherhood realness from @fruitsofmotherho

If your child is old enough to sleep comfortably a