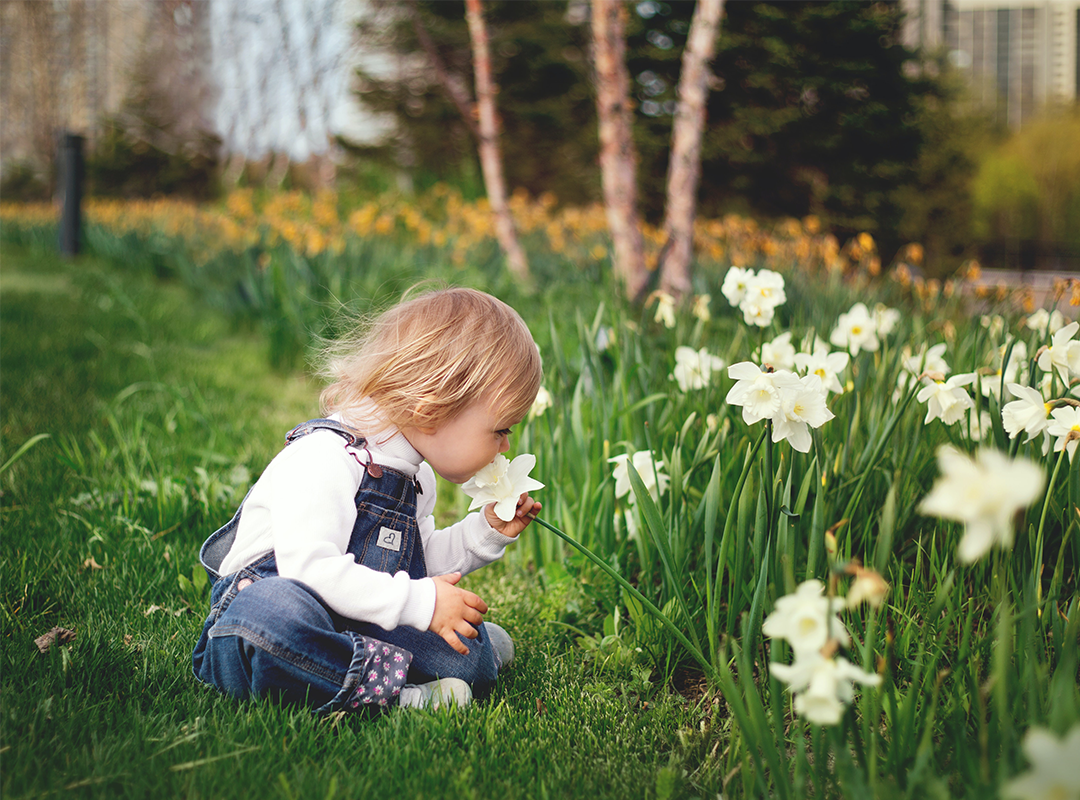 Every parent will tell you that their kids grow up too quickly, but I’m here to tell you that once more. My daughter, Amalia, is 15 months and I swear I woke up one morning recently and all of a sudden my baby was gone and a toddler had appeared out of thin air.

Amalia was an easy baby. We put her on a pretty rigid schedule from the beginning so if she cried, which was rare, we usually knew exactly what she wanted. We were so lucky to have such an easy baby, especially because I was going through PPD and didn’t know it at the time. She slept well, she ate well, and she was generally a happy little peanut. Trust me, I know how lucky we were!

But on her first birthday, something shifted in a big way.

She’s still an amazing girl but has become challenging in a lot of ways. She’s opinionated, she has thrown some tantrums, and she knows what she wants! Based on conversations with friends, her teachers, and her doctor, all of this is very normal, but we were so not prepared for our transition from baby to toddler, and it hit us suddenly and furiously.

At first, I had no idea how to handle this transition, but after living through it and talking to our pediatrician and lots of mom friends, here are my tips for some of the biggest shifts that come in the transition from baby to toddler.

When Amalia started eating solids at around five months old, I made most of her purées and didn’t follow the Feeding Littles rules that everyone is so into these days. My bad! I now wish I had, because after she turned one, she turned into a picky eater. Before that, she would eat grilled fish with pesto, veggies galore, and pretty much anything I put in front of her (except red meat).

But a switch flipped at meal times, and she turned into a super picky eater who would throw food on the floor, and scream-cry at the top of her lungs. Dinnertime at my house was not fun, I promise you that! But there was no way that I was going to let that fly because I would get anxious at around 5 pm every night and she wasn’t eating well. Something had to give.

Our doctor and her daycare teachers all urged us to give her whatever we’re eating for dinner or really any food that tastes great and if she didn’t eat that, there’s no dinner. Period. Back in the scream-crying days, I would give her a pouch or fruit or basically anything I knew she would eat because I didn’t want her to go to bed hungry. I didn’t realize at the time that I was exacerbating the problem.

When I first heard this course of action, I was horrified. How could I send my angel baby to bed without dinner? But let me tell you, I’ve learned the hard way that it is definitely the way to go. If she’s hungry enough, she’ll eat anything and when she’s not, she still gets her sippy cup of goat’s milk before bed. Not eating dinner doesn’t seem to affect her sleep in the slightest. The only noticeable difference is that she eats a lot more at breakfast.

Amalia no longer throws dinner tantrums and eats pretty well! She’s still not totally sold on veggies, but I try.

I have two other tips for mealtimes that have also helped:

Babyproof for safety, but train them not to touch certain things

When Amalia started walking at 13 months, we had another major shift. As everyone had warned us, she now wants to walk everywhere and do everything on her own. This is fine and fun to watch at home where things are baby proofed but frustrating and sometimes even scary when we’re out and about. She is very curious which I love, but gets super frustrated if she is told she can’t do something like, you know, play with an electrical socket.

Our strategy here is while at home, babyproof the dangerous things (like stairs, outlets, toxic materials), and just say no when she tries to reach for anything else that she’s not supposed to. We’ve had to say no hundreds of times, but little kids learn quickly and she understands now what she’s allowed to touch and what she’s not. She doesn’t always want to follow the rules, but she knows them. And we’re going to keep trying because it would be impossible to fully babyproof our entire house. I don’t want to get rid of every nice thing that we own!

She is very curious which I love, but gets super frustrated if she is told she can’t do something like, you know, play with an electrical socket.

One of my favorite pieces of parenting advice that I’ve ever received was from Amalia’s pediatrician (who I’m mildly obsessed with):

Don’t ever say no if the answer will eventually be yes.

I love this sentiment because it forces us to think about what battles to choose. If we might end up giving in, we try to just start with a “yes” so that she doesn’t learn how to play us like fiddles! Now that she’s a toddler, she has more opinions and knows what she wants. But what she wants isn’t always a great idea (like eating handfuls of sand, for example) so saying “no” (and sticking to it) is something that we do constantly.

But picking our battles has been key. I still want her to have fun and be a kid! For example, I don’t let her play with anything dangerous, but sometimes while I cook her breakfast or dinner, I’ll let her go through the pots and pans and bang around. I used to want to say “no” because it was annoying for me, but she has so much fun with it and she’s not hurting herself or breaking anything. It’s so worth it to keep her occupied and she gets the biggest grin on her face while doing it.

Now if she were playing with glasses or something breakable, that would be another story…

Just before her first birthday, Amalia threw a tantrum because I wouldn’t read her a book for the (literal) 16th time. I said “All done!” and put the book away like I always had and she was full-on face down on the ground kicking and screaming. I was in shock and had no idea what to do, but I remembered a friend telling me that ignoring a child when he or she has a tantrum is the best course of action. So I did that, and within a matter of minutes she sat back up and was totally normal. It was as if another devil baby had taken over her body, and since it was the first time I had ever seen her act like that, it really freaked me out.

Since then, it’s happened a few times and every time I ignore it and she stops. She rarely does it now because she knows she won’t get a reaction out of me, and when she does, it’s over within a matter of minutes.

I am so excited for this next year with her because we’ll be able to communicate better and better, and her personality shines through more every single day. My husband and I are prepared to take on the challenges of toddlerhood together and as calmly as possible. We both believe that if we’re on the same page and support each other in this parenting journey, it makes things a lot easier and more manageable.

If your baby is growing into a toddler soon, I promise it’s not all scary! There are so many sweet moments and looking at the world from her curious eyes is heartwarming beyond anything I’ve ever felt before. Her emotions might be more intense, but her love is too... And every time she says a new word I feel like the proudest mom in the whole world!

Consistency is the key to your sanity

Toddlers under the age of two don’t usually understand basic reasoning the way adults and older kids do. When my daughter does something that she isn’t allowed to, I’ll tell her no, explain why, and then distract. This three-step process has to be repeated many times in every situation for it to stick. Sometimes it can feel like banging your head against a wall, but when it finally clicks, it feels like a miracle!

Toddlers under the age of two don’t usually understand basic reasoning the way adults and older kids do.

One great example of this is when she would throw food on the floor. At first, it would stress me out and I’d get so frustrated. Then I realized that if I tell her, “No, that’s not okay and not respectful,” and then put my hand out for her to hand me the food instead, it gives her a new task that she feels good about. When she hands me the food, I praise her for it.

It took about 20-30 times of us doing this for her to understand it. Now, when she’s done eating she’ll (usually) hand me whatever is left on the plate to tell me that she’s finished.

And enjoy the ride

Time flies and our kiddos are only little once. Despite the difficulties of toddlerhood, my daughter is at the most amazing, delicious age. She’s happy, she still loves her mama, and her giggles could end wars, I swear.

But as a busy working mom, it’s sometimes easy to go through the motions of our day without ever stopping to really just enjoy it. I try to make it a point to turn off my phone and take in her laughs and yummy baby smells in the evenings before she goes to sleep. The best moments are when she crawls into my lap and we read together in a cozy chair. It’s pure heaven and I never want to forget that feeling, because I know that I’ll blink again and she’ll be a teenager before I know it.

How have you handled your babies becoming toddlers? Share your tips with us in the comments!