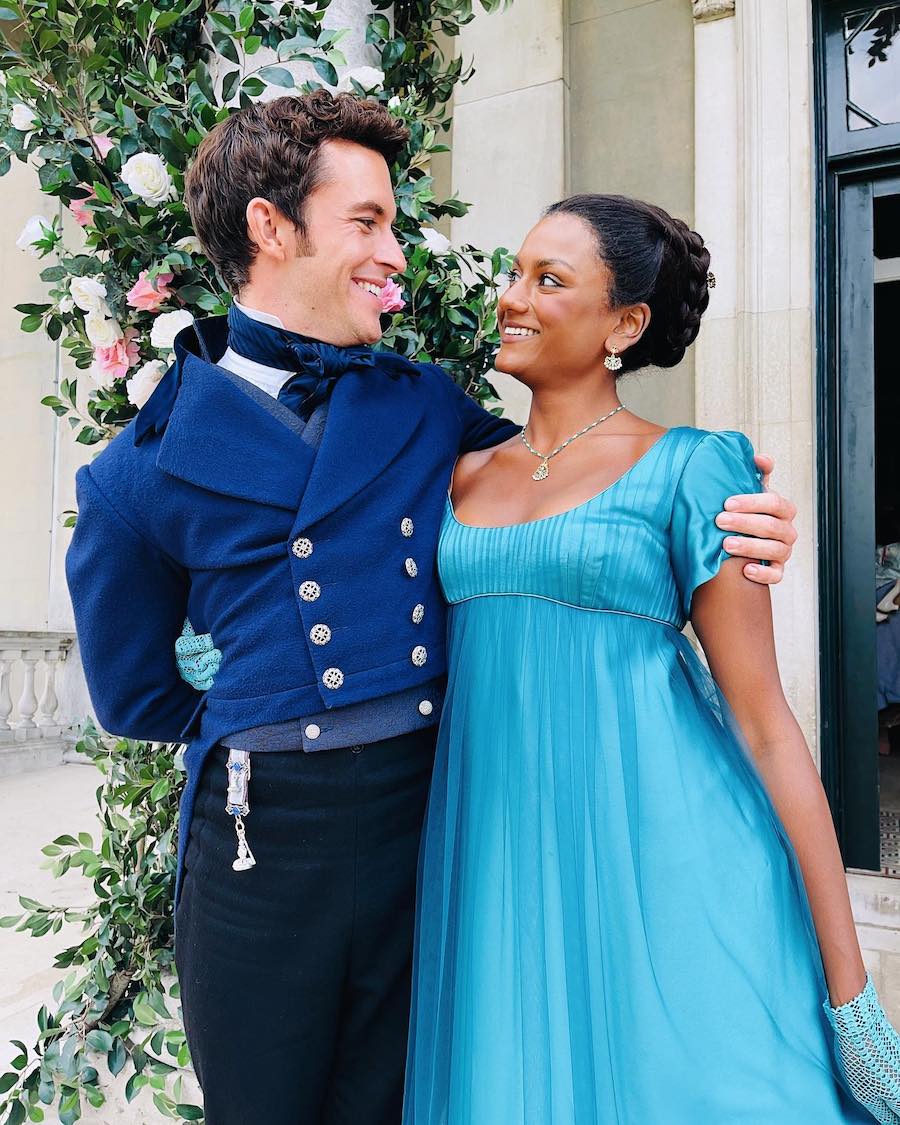 When my husband left for a guys trip that coincided with the release of Bridgerton season 2, I was excited to have each of my evenings free to binge-watch after bedtime. I expected a similar story to the first season of Bridgerton: duty at odds with true love amidst beautiful manors and rolling English countryside (plus plenty of sexy time).

What I didn’t expect was to have tears falling down my face—lots of them. Season 1 brought us a coming-of-age and end of innocence love story between Bridgerton daughter Daphne and Simon, the Duke of Hastings, with plenty of heat between them. Season 2 focuses on the eldest Bridgerton son, Anthony, with layered themes of grief, family duty, and, of course, love, as he’s caught between the attention of two sisters, Kate and Edwina Sharma.

While I was among the viewers feeling the Duke of Hastings’ absence for sure (we still don’t forgive you for leaving, Regé-Jean Page!), there’s so much else to love about this season. As I wrap up my solo viewing binge of season 2 of Bridgerton, here are 13 things I can’t stop thinking about.

First, we must talk about the Bridgerton family. What is it about sitting in that powder blue room that brings out such delightful conversations? The roasts are endless and each a sign of love, which we see during Eloise’s feather-topped societal debut and the competitive croquet match with the Sharma sisters.

Underneath the jabs, however, is so much tenderness and genuine care for one another (like the imposter discussion between Eloise and Benedict on the swings and the family choosing to dance together despite the fact that no one shows up to their ball). They warm the heart.

And as anyone who’s experienced a shared trauma within their family knows, it can bring you closer together or push you apart. The Bridgerton bond shows the power of moving through it together.

2. Anthony’s Flashback with His Father

And since we’re talking about family trauma, I think it’s safe to say we were all completely shocked by the death of Anthony’s father, Lord Edmund Bridgerton, in episode three and by the way he died. It’s as if Shondaland wanted us all to feel as blindsided as the Bridgertons felt at the sudden loss of their beloved father and husband.

As in real life, the raw grief manifested in each family member differently. Anthony remains afraid of loving again to spare himself and any potential partner the heartache. And his mother is so wrapped in her own unspeakable grief, trying her best to get through the days, she leaves her family missing her comfort and support. Anthony ends up as the one who must pick up the pieces, something we soon learn he has in common with Kate Sharma.

3. Lady Bridgerton in Labor and an Impossible Choice

Combine the grief of sudden loss with a birth plan gone awry and the writers really gutted us in episode three. Lady Bridgerton is in labor in her room with doctors and servants scurrying around as she cries out in pain and anguish. The baby hasn’t turned and the doctor is asking Anthony to make the impossible choice: save the baby or the mother while Lady Bridgerton is literally right there in labor!

Lady Bridgerton declares what her husband would’ve wished—to save her—but the doctor insists Anthony must decide. Thankfully, we know how it ends. And Anthony does the right thing and leaves the decision to his laboring mother. “Whatever she chooses,” he says, and leaves the room.

4. A Quick Pause to Talk About the Music

Let’s take a break from the sads for a sec and discuss the music. Like in season 1, the string covers of popular songs are its own character in this show. I’m even listening to them as I write this and am transported back to each scene; the cover of Madonna’s Material Girl as the Sharmas enter their first ball, Harry Styles’s Sign of the Times as Edwina walks down the aisle, and Miley Cyrus’s Wrecking Ball under the unstoppable relationship of Anthony and Kate. Each tune adds a meaningful layer to the beautiful background of this show.

5. And Who Can Forget Lady Whistledown?

Penelope really owns her quill this season, from tough negotiations with the printer to her convincing pitch to the modeste, Madame Delacroix. But it’s also clear that Penelope still has a lot to learn when it comes to the consequences of her actions as Lady Whistledown.

6. But Penelope, Please Get Over Colin Already!

Penelope is also all of us as teenagers. She’s yet to understand that love and connection should not be this hard—and this unrequited.

We’ve all been there: thinking every little conversation or action by one’s crush must have a deeper meaning. I can only imagine that when Penelope is older and has found someone who values her for more than “loyalty” and what she “gives to him,” she’ll look back and cringe over how hard she was crushing on Colin.

And since we’re on the subject of Colin: Can we just give a slow clap for Miss Thompson/Lady Crane for telling Colin to move on already and stop living in the past? When Colin shows up unannounced at her new home, with her new babies and new husband, she asks what we all are thinking: “Why did you come [here]?”

Colin might be my least favorite Bridgerton—convince me otherwise. You almost want him to get defrauded by the new Lord Featherington later in the season. He does redeem himself in the finale—but only slightly.

8. Dinner with the Sheffields

But I think we can all agree the Sheffields are the actual worst. Lady Mary’s parents—and Edwina’s grandparents—the Sheffields come back into the picture for dinner at the Bridgerton household. They’d previously disowned their daughter after she chose love over duty and married an “unsuitable match.” Now, they’ve secretly offered their fortune back to the family as long as Edwina makes an appropriate societal match—a plan only Kate (and, later, Lady Danbury) know about.

Lady Sheffield immediately makes the dinner awkward by dredging up the past and revealing their offer. And despite Lady Danbury and Lady Bridgerton’s attempts to change the subject, things get uncomfortable.

The Sheffields seem to represent the worst kinds of toxic people. And just as Anthony does at dinner, sometimes it’s best to dismiss them from your life—even when they’re family.

9. The Trifecta of Lady Mary, Kate, and Edwina

The Bridgertons aren’t the only family to love this season. Though we learn they are half sisters, the sibling bond between Kate and Edwina is heartwarming and familiar. Kate is the ever-overprotective older sister and Edwina is trying to assert her independence. Add in the unwavering love Lady Mary has for them both, even through the shock and disappointment over what was revealed during the Sheffield dinner and later at the wedding, and they are also #familygoals.

10. Edwina at the Wedding

And about that wedding: Edwina leaves Anthony at the altar after witnessing the moment between Anthony and her sister, Kate. But the queen is still expecting a wedding, and Edwina must decide whether or not to move forward. The wedding guests are held captive on the palace lawns amidst peacocks and speculations about the delay. We viewers are also waiting with bated breath on Edwina’s decision when suddenly the king bursts into the room. Suffering from what we surmise is dementia, he begins talking to the queen as if it’s their wedding day. The whole of the room is struck speechless until Edwina owns the moment.

If you weren’t rooting for Edwina before, you are after her incredible show of patience and grace as she reminds the queen and king of the love they shared. She diffuses the situation and gives us another glimpse into why the queen is so set on love matches and weddings. They are not for her mere amusement but rather because she longs to be reminded of what it feels like to be young and in love, as she once was.

Back to the love triangle. After Edwina calls off the wedding, she says what we were all thinking about Kate and Anthony together: “Was I truly that blind? Were they always this obvious?”

The smoldering sexual tension between Kate and Anthony *almost* makes up for the lack of sexy time this season. One can’t help but think how this must have played out in real life in olden times, when dates were overseen by your parents or other chaperons. What if you felt so magnetically attracted to someone but couldn’t act on it? The simmer between Kate and Anthony is nearly as hot as the moment they finally get together (which, BTW, thank you for that outdoor romp, Shonda. My lord, indeed!)

12. When Anthony Realizes the Full Meaning of Family Duty

While Anthony is contemplating what to do about Kate, younger brother Gregory comes to talk to him in his study and starts asking about their father. Initially, Anthony seems to dismiss young Gregory. But then he pauses and calls his little brother back in.

We watch Anthony fully step into the role of “man of the house,” realizing family duty is more than keeping the ledgers. Emotional support matters, too. When he says to Gregory, “we don’t talk about him [their father] enough, do we?” as Lady Bridgerton quietly overhears—I mean, grab a tissue.

13. All the Mothers of ‘Bridgerton’

From Daphne’s delight in her little son’s first steps to Lady Mary’s assurance of her love and worthiness to Kate, the mothers of Bridgerton had so many memorable moments.

Even Lady Featherington gets redeemed after all of her scheming, plotting, and questionable parenting—i.e. suggesting her daughters put their bosoms on better display. When she passionately declares her motives to the new Lord Featherington, this mother certainly looked at her with a little more empathy and understanding.

No moment was more poignant, however, than when Lady Bridgerton sits down with Anthony after they learn Kate will recover from her riding accident. She admits to Anthony that she made mistakes in the time after Edmund Bridgerton’s death. She sees the impact the loss had on Anthony. Throughout the season, she has tried and tried to make Anthony understand that love, true love, is worth pursing, even if it might cause you pain. But up until this moment of vulnerability between mother and son, we don’t know if Anthony can break down the walls he’s put around his heart.

And so came the tears. It’s a hard truth to know we will not always get it right as parents and our children may suffer because of our actions. But admitting when we are wrong and asking for forgiveness can help families move toward healing. In most cases, choosing love is the answer.

And so concludes this writer’s thoughts on season 2 of Bridgerton. Now, if you’ll excuse me, I think I need to go back and watch every episode again. 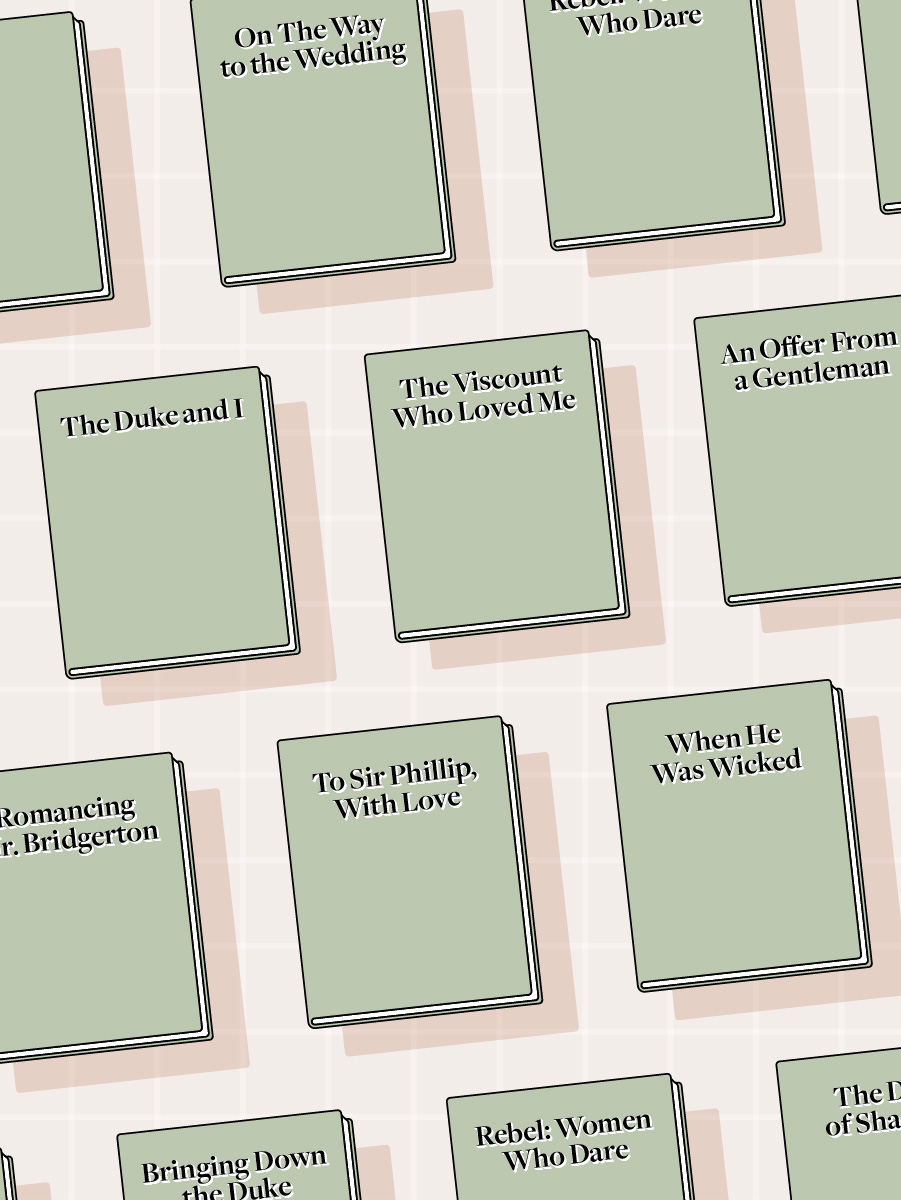 Love Watching ‘Bridgerton’? Read These Books Next
Click to Read