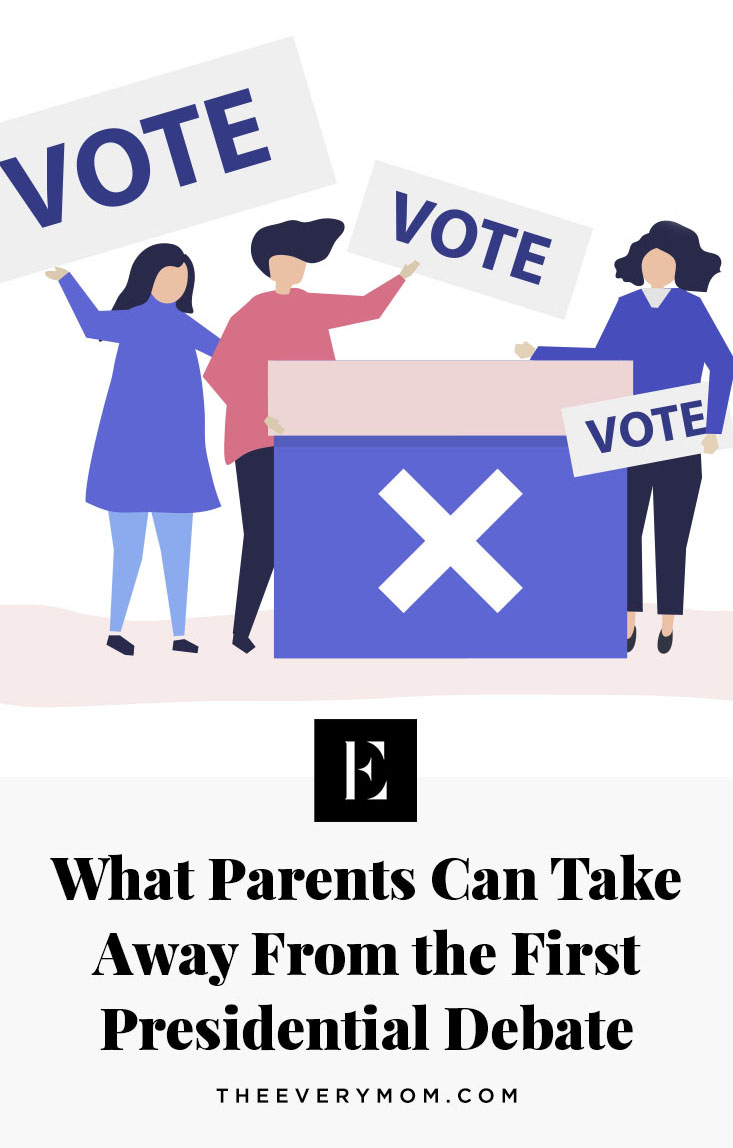 The first presidential debate between former Vice President Joseph R. Biden and President Donald J. Trump took place last night in Cleveland, Ohio. And like nearly everything occurring in 2020, it was mired in chaos and deeply unsettling.

What I had hoped would be at the heart of the evening’s debate was meaningful policy pertaining to families, young children, and the future of the planet they are set to inherit. Instead, what viewers were subjected to was a barrage of outbursts, interruptions, and aggressive attacks. It was abundantly clear that, with none of the issues in focus, the lessons from the event would instead issue a powerful reminder of how we are to move peacefully through the world.

As a parent, here is what I’m taking away from the evening.

When pressed to condemn the white supremacists often seen gathering beneath the Trump banner, the president only issued a casual request for such groups to “stand back and stand by,” which—as if it even needed to be underscored—is not a denunciation.

In response to the president’s remarks, the New York Times reported that one such group, the Proud Boys, celebrated Trump’s statement as a “historic” win and a “tacit endorsement of their violent tactics.” Not only does the president’s refusal embolden dangerous far-right groups, but it also lays bare a troubling truth about a potential second term: Trump shows little interest in attempting to unify a deeply hurting and divided nation.

In what was, in my opinion, the most moving moment of the night, Biden came to the defense of his sons, Hunter Biden and the late Beau Biden. The latter, an Iraq War veteran who later died following a battle with brain cancer, he lauded as a hero and a patriot. Biden also spoke candidly of Hunter’s struggle with substance abuse—and took pride in his road to recovery. “Like a lot of people you know at home, my son had a drug problem,” Biden said. “He’s overtaken it. He’s fixed it. He’s worked on it, and I’m proud of him.”

Earlier this month, the president halted the practice of racial sensitivity training throughout federal agencies. The memo issued from his office cited such training on white privilege and critical race theory as, “divisive, anti-American propaganda.” In the midst of discussing the Black Lives Matter movement, Biden questioned Trump on his decision to end these sessions for federal employees. “I ended it because it’s racist … ” the President said. “I ended it because a lot of people were complaining that they were asked to do things that were absolutely insane—that it was a radical revolution that was taking place in our military, in our schools, all over the place.”

This is a painful moment for our nation, and it is critical for us all to acknowledge the many injustices people who are Black, Indigenous, and People of Color face each and every day. Here at The Everymom, we firmly believe that Black lives, Black dreams, and Black futures matter. To shut down the conversation just as it is truly beginning is to deny the BIPOC community any hope for equitable footing.

Here at The Everymom, we firmly believe that Black lives, Black dreams, and Black futures matter. To shut down the conversation just as it is truly beginning is to deny the BIPOC community any hope for equitable footing.

4. We got a real-time lesson in critical thinking

Sure, politicians have long mastered the ability to harness and manipulate data to their advantage. As such, in any debate, the nation’s fact-checkers are hard at work, parsing truth from fiction as it tumbles from the candidates’ lips.

With a fair amount of hyperbole, this debate served up a good reminder for parents to teach their kids the importance of thinking critically and doing their research. After all, our kids will grow up with the world and all its news—reliable and not so much—at their fingertips. It will be imperative that they learn to ask the right questions and double-check their sources on their way to uncovering the truth. 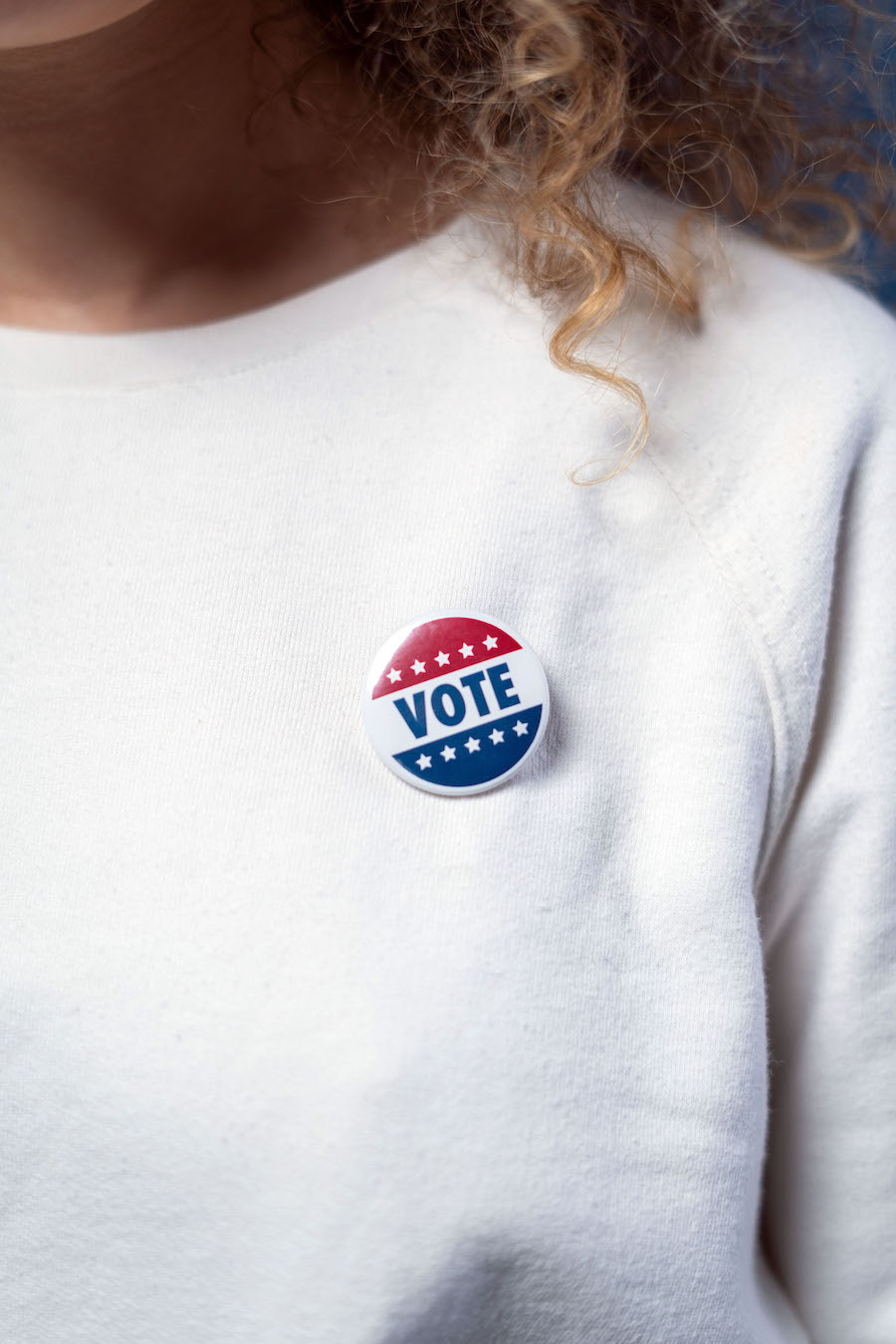 5. We saw the importance of listening—even when we don’t agree

Mid-debate I received a text from a friend that said, “We expect better from our kids!” Isn’t that the truth? Would we as parents ever tolerate our children treating one another in such a way?

I know some readers will celebrate the President’s behavior as “victorious” and “aggressive.” I know too that Biden had moments that likely sent Democrats into a collective cringe. But by and large, I was taken aback by Trump’s penchant for interrupting. It became such an issue during the debate that it prompted an oft-bewildered moderator Chris Wallace to appeal directly to the president to allow his opponent to speak. It reminded me of the importance of active listening and how imperative it is to model for our kids how to be open and respectful—even when we disagree.

6. Biden reminded us to vote

At the end of the debate, when the entire country was frazzled and depleted, Biden addressed the American people, urging us to get out and vote. After an evening that left many feeling hopeless, Biden sought to give agency back to the people. “Just make sure you understand,” he said, addressing the camera. “You have it in your control to determine what this country is going to look like the next four years.” If you need any information on voting, from registering to checking your polling place to knowing your rights, vote.org has you covered. Whether you vote early, in-person on election day, or by mail, make certain your voice is heard and your vote is counted. The future of our country is in our hands.

If you missed the first presidential debate and would like to watch it, click here for the full video.

Read More: Here’s What to Know About Voting by Mail, State by State