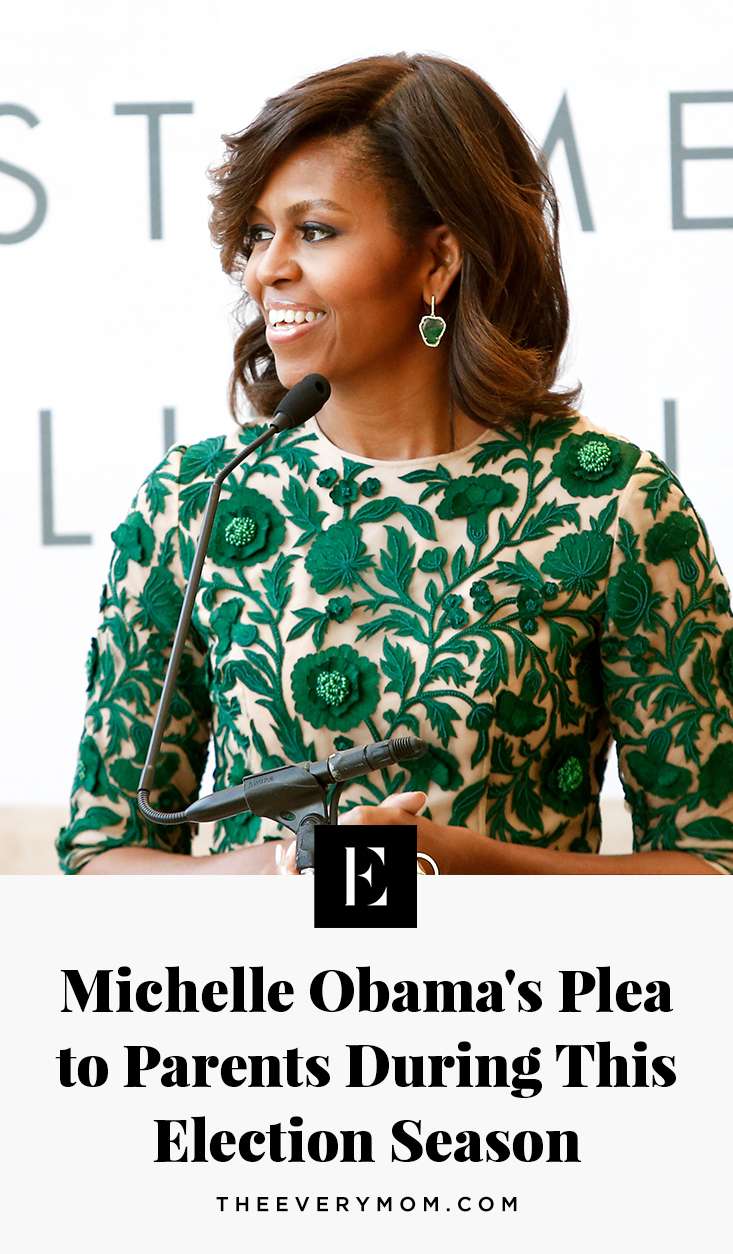 Last night, Michelle Obama took the proverbial stage at the Democratic National Convention. And though, like everything else this year, the convention took place virtually at a time where we’ve all likely tired of video calls and socially-distanced engagements, one thing was clear: the former First Lady’s ability to move us to tears with her words has not changed.

When we’ve most needed a calm, thoughtful, empathetic leader to pull us back up from our knees, Michelle Obama stepped in graciously, as she often does. In her heartfelt, yet firm, 18-minute speech, she addressed the incompetencies of the current president, along with acknowledging the many trying hardships that Americans (and specifically parents) have had to endure this year. Obama’s speech was poignant and hopeful, as has come to be her signature, but she did not hesitate from giving us tough love either:

“If you take one thing from my words tonight, it is this: If you think things cannot possibly get worse, trust me, they can, and they will if we don’t make a change in this election,” she said.

And that is our call to action. This is when we stand back up, we brush ourselves off, and we get to work. We canvass, we have hard conversations with our friends and family, we recognize our own faults and missteps, and we try again. We request our ballots, we look up our candidates, we use the resources available to us and we do the work. We vote for ourselves, our families, and each other. We participate in the democratic process in order to preserve our democracy, and we stop making excuses about why we shouldn’t.

Now is the time to show up for each other.

Here are a few of the highlights from Obama’s DNC address.

Why We Need to Vote

Obama didn’t shy away from pointing out what exactly has gone wrong since 2016 and why that is. But what she also brought up is how so many of us helped create this situation that we are currently in by choosing to not exercise our right to vote:

“As I’ve said before, being president doesn’t change who you are; it reveals who you are. Well, a presidential election can reveal who we are too. And four years ago, too many people chose to believe that their votes didn’t matter. Maybe they were fed up. Maybe they thought the outcome wouldn’t be close. Maybe the barriers felt too steep. Whatever the reason, in the end, those choices sent someone to the Oval Office who lost the national popular vote by nearly 3,000,000 votes.

In one of the states that determined the outcome, the winning margin averaged out to just two votes per precinct—two votes. And we’ve all been living with the consequences.”

Voting is not a right or privilege, it’s our civic responsibility. It’s among the most important powers we have as citizens and our collective ability to vote ensures that our democracy runs as it’s supposed to. As Obama says, we’ve all been living with the consequences of what happens when we choose to forgo our responsibility.

What Exactly Is at Stake

Obama gently pointed out what we’ve all been thinking these last few months: how exactly did things get so bad? And in giving a brief and calculated rundown of where we are as a nation right now, many of us were hit in the gut once again:

“Four years later, the state of this nation is very different. More than 150,000 people have died, and our economy is in shambles because of a virus that this president downplayed for too long. It has left millions of people jobless. Too many have lost their health care, too many are struggling to take care of basic necessities like food and rent, too many communities have been left in the lurch to grapple with whether and how to open our schools safely. Internationally, we’ve turned our back, not just on agreements forged by my husband, but on alliances championed by presidents like Reagan and Eisenhower.

And here at home, as George Floyd, Breonna Taylor, and a never-ending list of innocent People of Color continue to be murdered, stating the simple fact that a Black life matters is still met with derision from the nation’s highest office.”

To have a president who holds basic human rights in high regard for every American should not be something we have to compromise as a nation—it should the bare minimum expectation for one who is to lead our country.

What This All Means for Our Children

Michelle Obama’s ability to relate to parents is undeniable. As a strong, Black mother herself, she recognizes the difficulties facing parents and children in this country and strives to remedy those through her endless work and service. Because of that, she is a strong champion for practicing and teaching empathy. Last night, she spoke bluntly about what our kids are seeing, and hence learning from, in the White House and in our society:

“[R]ight now, kids in this country are seeing what happens when we stop requiring empathy of one another. They’re looking around wondering if we’ve been lying to them this whole time about who we are and what we truly value.

They see people shouting in grocery stores, unwilling to wear a mask to keep us all safe. They see people calling the police on folks minding their own business just because of the color of their skin. They see an entitlement that says only certain people belong here, that greed is good, and winning is everything because as long as you come out on top, it doesn’t matter what happens to everyone else. And they see what happens when that lack of empathy is ginned up into outright disdain.

They see our leaders labeling fellow citizens enemies of the state while emboldening torch-bearing white supremacists. They watch in horror as children are torn from their families and thrown into cages, and pepper spray and rubber bullets are used on peaceful protestors for a photo-op.

Sadly, this is the America that is on display for the next generation.”

As parents, we live the phrase “lead by example.” But what will that mean when our little babies soon, as young impressionable children, enter a society that goes against everything that we’ve taught them? I’m not willing to find out.

What Can We Do Now?

One of Obama’s greatest strengths is her ability to acknowledge loss, tragedy, and hardship while still showing up as a pillar of hope. To close out her speech, she took some time to recognize the mental and emotional state of many Americans in the midst of this seemingly endless pandemic, while pointing us in the direction of persistence and perseverance:

“Look, we have already sacrificed so much this year. So many of you are already going that extra mile. Even when you’re exhausted, you’re mustering up unimaginable courage to put on those scrubs and give our loved ones a fighting chance. Even when you’re anxious, you’re delivering those packages, stocking those shelves, and doing all that essential work so that all of us can keep moving forward.

Even when it all feels so overwhelming, working parents are somehow piecing it all together without child care. Teachers are getting creative so that our kids can still learn and grow. Our young people are desperately fighting to pursue their dreams.

And when the horrors of systemic racism shook our country and our consciences, millions of Americans of every age, every background rose up to march for each other, crying out for justice and progress.

This is who we still are: compassionate, resilient, decent people whose fortunes are bound up with one another. And it is well past time for our leaders to once again reflect our truth.”

As Cory Booker said after Michelle Obama’s speech: I miss Obama, and I miss her husband too.

Read More: Everything You Need to Know About Paid Leave Under the Families First Coronavirus Response Act