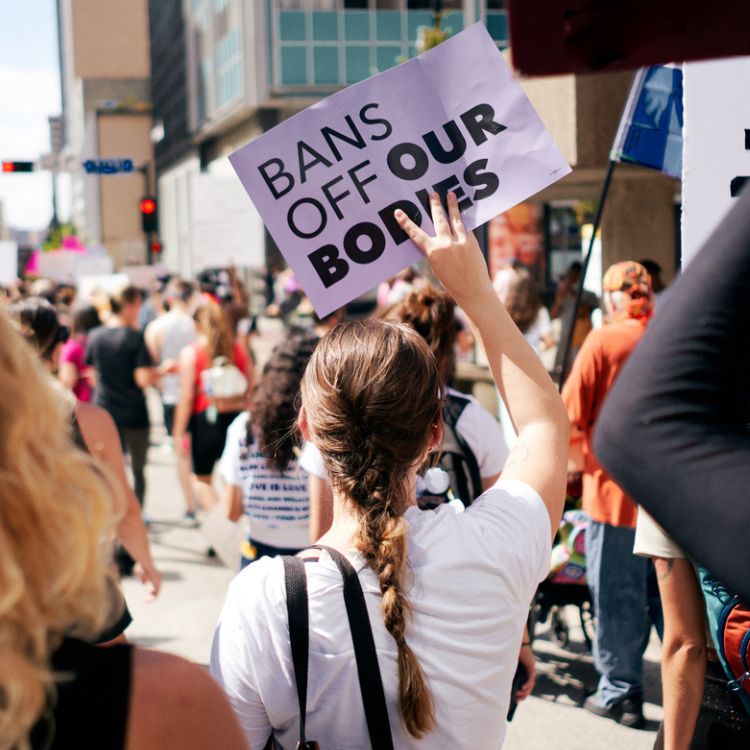 In a crushing 5–4 vote, the U.S. Supreme Court has overturned Roe v. Wade, the landmark case federally protecting abortion access in America. Abortion access is now strictly determined on a state-by-state basis, and there is no federal right to abortion. Depending on your state’s laws, abortion access may be illegal after a particular gestational time or may be illegal altogether, even in cases of rape, incest, ectopic, or other life-threatening pregnancies. This devastating attack on reproductive rights comes more than a month after a draft of the Court’s decision in Dobbs v. Jackson Women’s Health Organization was leaked to Politico. Although this decision was expected, the magnitude of its impact on women and child bearing people is colossal. Now that federal abortion protection has ended, many of us are wondering where we go from here.

In this article
1 America Without Roe
2 What Other Rights Are Impacted?
3 What Can Be Done?
4 Reclaiming Our Bodies and Choices

A fundamental right has been stripped from us, forcing a lot of people to reassess reproductive options and sexual freedom. This is about more than terminating pregnancies; this is about women and child bearing people’s rights to bodily autonomy, the right of choice, the right to a safe and effective medical procedure, and the right to simply decide that having a child isn’t what someone wants at a particular time. These are decisions that should be made by individuals involved, not a body of government. But, now that we’re here, we have to stay informed and figure out our next best options.

With Roe overturned, state governments have the exclusive say in whether or not abortions are legal in their state. 13 states enacted “trigger laws” that made abortion illegal once Roe was overturned. The trigger laws in three of the 13 states banned abortions effective immediately, and the other 10 states’ bans are effective after 30 days, with governor certification, or both. Here’s the breakdown:

What Other Rights Are Impacted?

Currently, contraceptives are still legal across the U.S., but states like Louisiana and Idaho have hinted at restricting access to Plan B and other “morning after” pills as an extension of Roe being overturned. If you can, purchase emergency contraceptive pills now while they are still legal and accessible. You can buy them from drug stores, pharmacies, and other retailers without a prescription. They are usually in the family planning aisle, not behind counters, for easy access. You can also order them online from individual manufacturers and even on Amazon.

The Supreme Court has demonstrated its willingness to abandon long standing legal precedent, enforce flimsy legal analyses, and remove life-affirming rights while upholding life-ending ones. This is a scary reality for everyone, especially LGBTQ+ communities whose legal rights of marriage, fertility treatments, and adoption are preserved under case law precedent. In a concurring opinion from the Dobbs decision, Justice Clarence Thomas called on the Court to overturn other landmark decisions protecting same-sex marriage and bedroom privacy. Sadly, the attack on our rights might not end with abortion.

What Can Be Done?

There is a lot of processing taking place––individually and collectively––in response to the Dobbs decision. It’s perfectly appropriate to be outraged, sad, or even nervous about what this means for your reproductive plans. Your emotions are valid, and you’re not alone in them. Talk to friends and family about your feelings, write out your thoughts in a journal, or share your feelings with a mental health professional. In order for us to move forward, we have to acknowledge this blow. Then, we can pick our heads up and continue the fight.

Data from the Pew Research Center says that roughly 10 percent of abortions are performed on women outside their state of residence. Under Dobbs, this percentage could drastically increase as many child bearing people will now need to travel to other states in order to receive abortions. This will disproportionately affect those in financial crisis. Abortion funds help offset some of the costs associated with travel, lodging, and other accommodations. Consider giving to a local abortion fund, or donate to the National Network of Abortion Funds.

People across the U.S. are protesting in response to the Dobbs decision. This is a fundamental First Amendment right and a relatively inexpensive way to support the need for federal abortion protection. Also, consider supporting those who are continuing to seek abortion access. Volunteer to drive someone to a neighboring state, go with someone to an abortion appointment for emotional support, or help someone research their pregnancy termination options. The power of community can never be defeated.

Reclaiming Our Bodies and Choices

The fact is, abortions should be legal and accessible, and most Americans agree. The only guaranteed abortion access is through federal protection, and since that no longer exists, we are compelled to keep fighting until federal protection is restored. This means SHOWING UP to the polls during the 2022 midterm elections and voting in politicians who support reproductive rights and all life-affirming rights—those that empower breathing, walking people trying to live a safe, fulfilled existence free from constant threats of discrimination, violence, and government-induced economic hardship.

Honestly, the outlook seems pretty grim right about now, and there are far more questions than answers, more sorrow than joy, more work than progress. But, this isn’t the first time, nor will it likely be the last. We can’t be paralyzed by injustice. We’ve got work to do, people.

This article originally appeared on The Everygirl on June 24, 2022.