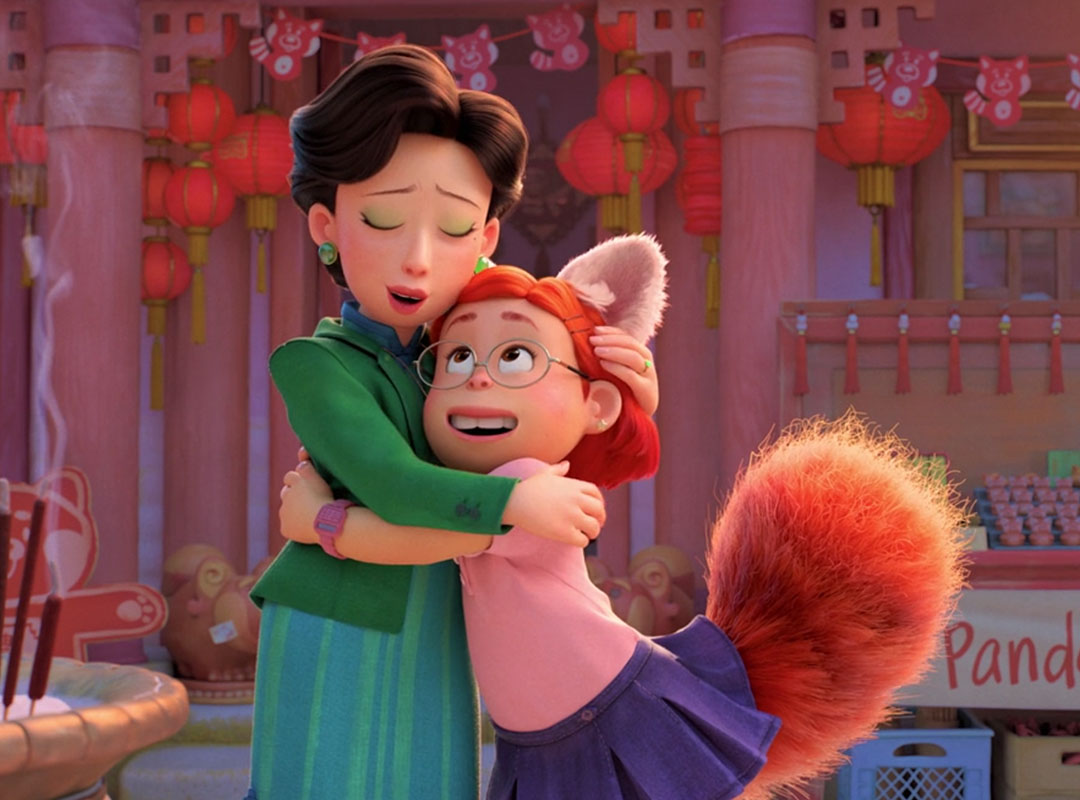 Like most kids the past two years, my daughters have had a lot of extra screen time. So when Disney-owned Pixar announced their new movie, Turning Red—something they hadn’t watched on repeat—it was big news in our house.

If you haven’t watched, Turning Red is a coming-of-age story following 13-year-old Meilin Lee as she manages friendships, crushes, and her overprotective mother. Oh, and when her emotions get the best of her, she turns into a giant red panda. Set in 2002 Toronto, it has plenty of nostalgic throwbacks like Tamagotchis, UGG boots, and boy band craze.

But those references were lost on my daughters, ages 6 and 9. They were most excited about the red panda and counted down the days by watching something else on repeat; the Turning Red trailer.

On release day, my girls watched the movie by themselves after school while my husband and I were finishing up work. So later at dinner, when my 6-year-old asked me what a period was, her question caught me off guard. Turns out, alluding to menstruation in a kids’ movie caught many parents off guard. And some weren’t too happy about it.

Upset I’d missed the chance for a meaningful conversation with my girls while the movie was happening, I sat down to watch Turning Red myself. And I loved it. I was laughing out loud, cringing at some of Mei’s mother’s antics, and traveling deep down memory lane. Then it prompted me to do something I’d been putting off; start a conversation with my own two daughters about periods.

Turning Red addresses some of the emotional and physical changes that come with puberty. Mei and her friends talk about boys, doodle pictures of boys, and have an obsession with the fictional boy band 4*Town. The other, more overt, reference comes when Mei’s mom thinks the red panda change happening to her daughter is the change. And we see—gasp—boxes of pads in an animated movie. Worth noting that I don’t think the words “period” or “menstruation” are ever mentioned in the film.

The movie is rated PG for “thematic material, suggestive content, and language.” And yes, there are a couple phrases parents might find funny that we may not want our kids to repeat (i.e. “stripper music”). Rebellion and disobedience are themes, so every parent can decide what they deem appropriate for their family.

This is one mom’s opinion. There is so much to love about this movie when you look at it through the eyes of your younger self and things you wished would’ve been talked about more openly. From shining a light on Chinese culture, to talking about generational trauma and emotional intelligence. Pixar and director Domee Shi filled this film with lessons for the parents as much as the kids. Below are a few things I took away after watching.

Similar to the actual teenage years, Turning Red is fun and funny with a side of cringe.

When Mei and her friends obsess over boy band 4*Town, I couldn’t help but remember myself as a preteen convinced I was going to marry either Donnie Wahlberg or Joey McIntyre from the band New Kids on the Block. In watching the movie, I cringed at the memory of tape recording myself singing “Please Don’t Go Girl” as an imagined duet Joey and I were singing to each other.

The teen years are such a mix of awkward and awful, carefree yet care-about-every-little-everything. My kids aren’t there yet, but it’s coming. Normalizing all the emotions they might start to feel is something I never saw on screen as a kid (which is perhaps why so many of us thought the ’90s show My So-Called Life was life-altering).

Third grade for my daughter has already brought “crush talks” and playground friend drama. Body changes are coming soon… which leads me to another reason I loved the movie.

It Helped Me Start a Conversation I’d Been Putting Off

When my 6-year-old asked me about periods at dinner, somehow I got out of answering it in the moment. But I made sure to return to the conversation when just her and I were driving together. I asked what she knew about periods. Turned out, her question hadn’t stemmed from Turning Red—it was from another show, The Babysitter’s Club on Netflix. Feeling like a stellar parent knowing movies and shows were basically raising my kids, we talked a little more about what “a period” actually means.

Key takeaways for a 6-year-old: Periods were a body change for girls that happen in the bathroom. And in her words, “It’s a sign you’re a woman.”

I felt pretty good about where we landed. After all, you don’t give your little one the full biology lesson the first time they ask where babies come from. These are ongoing conversations that build as they grow.

But now my youngest had more knowledge than my oldest, so I had to course correct. I later asked my 9-year-old if she’d ever heard of a period and did she want to know what they were. I went into a little more detail about what exactly happens.

Key takeaways for a 9-year-old: She’s got a few more years until she needs to worry about them (a huge relief). She now knows what the supplies in my bathroom and the pads in Turning Red are all about, and she couldn’t believe I’d had one every month for all this time and never told her.

Both girls seemed to appreciate their new knowledge—then quickly changed the subject. But here’s why I’m thankful for the movie. Not only does Turning Red start normalizing something half the world deals with—but it’s also sparking conversations. My own grandma thought she was dying when she had her first period because her mom (my great-grandmother) never said a word to her. Compare her trauma to the discomfort some people felt when they saw animated pads on screen, and, well, I don’t think you can.

It Reminded Me to Hold On, But Not Too Tightly

In the movie, Mei’s mom says at one point, “You’re a child, I thought I had more time.” Ugh, isn’t that what we all feel at one time or another? We know the time we have with our kids is fleeting. They are meant to grow and learn and leave. But our hope is they come back because we haven’t pushed them away.

Still, we can’t pause time. “Nothing stays the same forever,” says Mei at the end of the movie. So enjoy the now. Change is always coming.