What to Watch, Read & Listen to
written by JANELLE SHEETZ
January 23, 2023

Australian children’s show Bluey has been widely enjoyed and praised by parents over its three-season (so far) run—some even admit to watching it without their kids. The show follows Blue Heeler puppy Bluey and her family: mom Chilli, dad Bandit, and younger sister Bingo, as well as a number of other relatives and friends. Most episodes have something for adults to enjoy, like a joke about a loud and obnoxious toy being “lost” or a line that just teeters on being suggestive.

Most can also stand on their own merits, with clever writing and plots with something to teach kids about seemingly any subject without feeling like a preachy, heavy-handed “very special episode” or after-school special. At its best, the show does more with its seven-minute runtime than many much longer shows do. It serves both child and adult audiences equally with takeaways for everyone, and yes, even the occasional tearjerker. Here are the eight best Bluey episodes for adults to enjoy, from emotional and moving stories to parenting reminders we all need.

1. “Bike” — A Lesson in Perseverance and Problem-Solving

“The world is silly,” Bluey declares after struggling to ride her bike and wishing she could do it “straightaway,” without having to learn and practice. As she sits with her dad, Bandit, the two observe other kids throughout the park who are also struggling. Younger sister Bingo is having a hard time drinking from the water fountain. Friend Bentley can’t reach the monkey bars. Cousin Muffin is engaged in a battle with her backpack straps. The children make various attempts at their tasks, trying new tactics to varying degrees of success while Bluey and Bandit cheer them on without intervening.

The tasks themselves aren’t the only obstacles the kids have—they give in to frustration and give up before making final attempts. But they find success as they try new approaches while Bluey and Bandit cheer, “Ode to Joy” playing triumphantly in the background. It’s a sweet, simple lesson about perseverance and looking at problems from different angles, using creativity to arrive at a solution. It’s great for young kids, but it’s a reminder for adults, too.

2. “The Pool” — An Ode of Appreciation for All the Things Moms Do

Mom Chilli is “boring” and a “fusspot,” according to her daughters, for a variety of reasons—first, she tells Bluey to brush her teeth, then when Bandit and the kids head to the pool, she reminds them to take not just the fun stuff like pool toys but the necessities, too. “Boring things are still important,” Chilli says, and we see this throughout the episode. By leaving behind the necessities, they’re without everything from goggles and floaties to sunscreen and towels, significantly limiting how much they can enjoy the pool. But Chilli arrives, salvages the trip, and gets the kids to admit those boring things were important after all.

This is something we’re all too aware of as adults and parents, but “The Pool” reminds us that “fusspot” parents are just trying to make sure everyone is cared for—and that keeping track of the important things is a never-ending, often thankless, “boring” job. Did Chilli simply want to enjoy some quiet alone time before she joined the family? Did she know they left behind the necessities and choose to let them sweat it out—literally? I’ll leave that up to you. Chilli is whichever version of mom you need her to be.

3. “Camping” — A Story of Friendship and Serendipity

Dare I say this is one of the most well-written episodes of television ever? On a family camping trip, Bluey meets Jean-Luc, a dog who only speaks French. Despite their language barrier, they find a way to communicate and play together for the few days their families’ trips overlap. The less said about “Camping” the better, particularly the ending—for those who haven’t seen it, saying too much would spoil its best, most impactful moments. It’s a beautiful story of connection. “The world’s a magical place,” Chilli tells Bluey in its final minutes. This episode also features some beautiful animation, like a bright starry night sky and a sequence conveying the passage of time at the end.

4. “Mum School” — A Reminder That Each Day Is a Fresh Start

One of the things Bluey is known for is its seemingly unending parade of games and pretend scenarios. This time, the game is Mum School. The setup is simple: As Bluey cares for her children (balloons, of course), she wants Chilli to observe and score her accordingly. “You don’t need someone keeping score of your mothering!” Chilli says of her assignment, a line that may as well be delivered directly to parents watching. She acquiesces, though, and follows Bluey with a clipboard and pen, noting her interactions with the balloon “children,” with an interlude to observe Bandit’s attempts to get Bingo to brush her teeth.

Bluey follows Bandit’s lead and takes a gentler approach with her own “children,” opting to try to understand the root of unruly behavior as opposed to battling it. But what seems to be a commentary on parenting tactics takes a turn when one of Bluey’s balloons floats out of an open window. She worries about its future and safety, but Chilli reassures her the balloon will be fine because it had a good mom. It does mean Bluey has failed Mum School, though. “But that’s okay,” Chilli tells her dejected daughter. “We all fail Mum School sometimes. We can just start again tomorrow.” It’s a crucial reminder that we all make mistakes as parents, but they don’t make us bad parents. Whatever our shortcomings may be, each new day brings an opportunity to do better.

5. “Granddad” — A Tribute to the Passing of Time

On a drive to visit Chilli’s father, in the midst of Bluey’s complaints about being fed healthy snacks, Chilli tells the girls Grandad is on the mend from a case of heartworm and is on doctor’s orders to take it easy and rest. When they arrive, though, Granddad’s at work in the yard, much to Chilli’s dismay. He immediately runs off with the girls, insisting he’s in good health. It’s the three of them against Chilli, literally and figuratively. They’re running through the bush and hiding, and Granddad’s opinion that whether or not he rests should be up to him resonates with Bluey. “He has to accept that he’s getting older and needs to look after himself… I still need him,” Chilli says, getting to the heart of the episode’s themes about aging, health, and mortality.

We all know our loved ones won’t be with us forever, and attempts to keep them around might be frustrating if not futile or even selfish—it’s difficult to stay in bed when work needs done and kids need chasing. When Chilli catches up, she and her father share a moment sitting on the dock reminiscing about her childhood. Her father says it was “yesterday,” just as the image of them side-by-side fades to a nearly identical image from Chilli’s childhood. The episode also has funny nods to survivalists, like Granddad’s buried backpack of canned food and a friend who inquires about aliens.

6. “Duck Cake” — A Lesson in Selflessness

It’s Bingo’s birthday, and she’s chosen a complicated-looking duck design for her cake. While she and Chilli head off to hockey, Bandit is tasked with making the cake and Bluey is instructed to clean up her toys—but only hers, she insists, and not Bingo’s. She’d rather help with the cake, and Bandit tries every form of bribery he can to get her to cooperate.

Meanwhile, the cake construction isn’t going well, and when the duck’s head falls to the floor and Bandit follows in frustration, Bluey steps in to clean up the mess. Bandit’s gratitude makes Bluey’s tail wag, and while Bandit attempts to salvage the cake, Bluey is newly-motivated to clean up all of the toys, including Bingo’s. When Chilli and Bingo return, Chilli is pleasantly surprised by Bluey’s efforts, and Bingo, eager to see her cake, topples a basket of freshly-tidied toys. Despite the cake being a bit of a mess itself, Bingo loves it. Chilli turns to ask Bluey if she helped make it, only to find she isn’t in the room. The episode ends with a shot of Bluey cleaning up the spilled toys as her tail wags. It’s a sweet lesson in how helping others and going above and beyond can be satisfying.

7. “Baby Race” — A Reminder That All Babies Are Different

One piece of advice new parents often get is to never compare children, but if you’re around other kids often, it’s easy to fall into that trap and get hung up on milestones. “Run your own race,” Chilli tells Bluey when she insists on comparing her skills on the monkey bars to those of other kids. Then it’s story time: Despite rolling over early, baby Bluey was behind on walking, and a determined Chilli turned milestones into a competition, ultimately resulting in her feeling like she was “doing everything wrong” and skipping out on her mothers’ group. She got just the encouragement she needed from another mom who simply told her she was doing great.

From then on, Chilli changed her attitude. In true fashion, the episode ends with a beautiful moment of Bluey taking her first steps toward Chilli, as Bingo guesses Bluey’s motivation was seeing something she wanted. The episode also shows us fun flashbacks to a younger (and smaller) Heeler family, with funny nods to life as a new parent, from a sleep-deprived Bandit to his mother’s questionable and possibly illegal outdated parenting suggestions.

Every parent can relate when Chilli says, “I need 20 minutes where no one comes near me.” Bandit is determined to make that a reality and agrees to play “Sheepdog”—which, of course, means he has to pretend to be an unruly sheep Bingo and Bluey are failing to herd. But the girls have a hard time understanding why Chilli needs a little time alone. Bluey in particular worries she’s done something to upset Chilli, apologizes, and even asks why Chili doesn’t want to see them and if she wishes she hadn’t had them. “It can be hard work looking after kids,” Chilli explains. “Sometimes, mums just need 20 minutes.”

No one in the episode understands this better than next-door neighbor Wendy. Although she’s quite unamused with Bandit’s antics, her attitude changes as soon as she learns why he’s doing it, and she does her part to preserve Chilli’s precious 20 minutes. In the end, Chilli emerges calm and refreshed. It’s a sweet episode about loving people while also needing (and giving) space—and, at its heart, it’s about moms supporting each other. We love to see it. 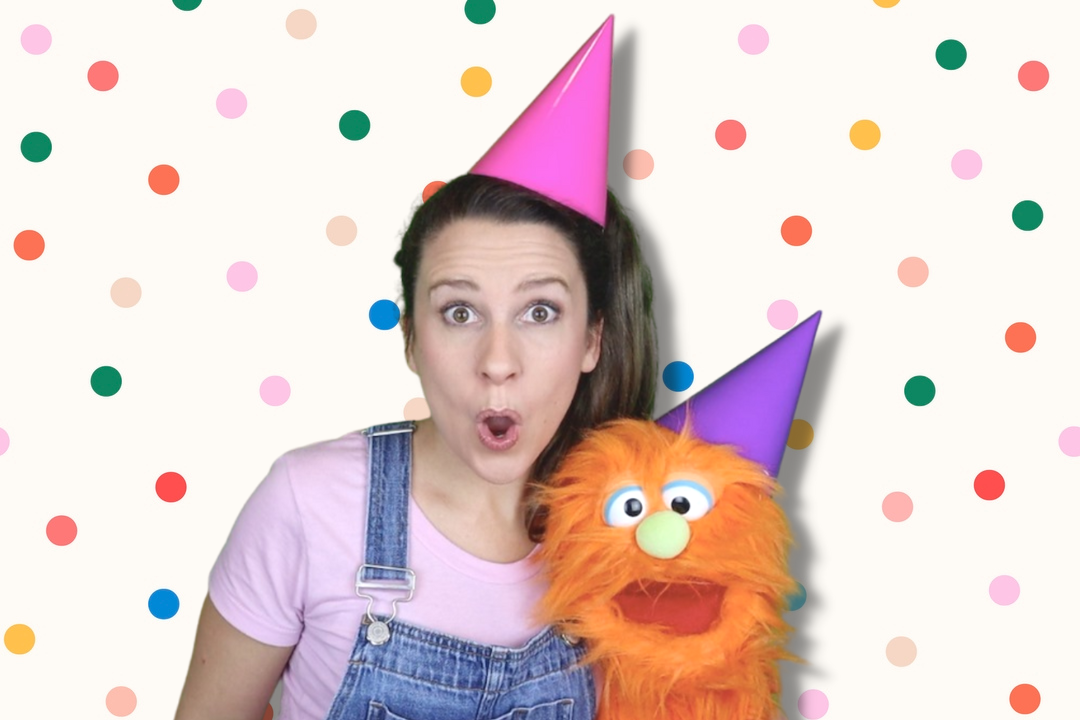 My Baby Is Obsessed With Ms. Rachel—Here’s Why I Love Her Too
click to read