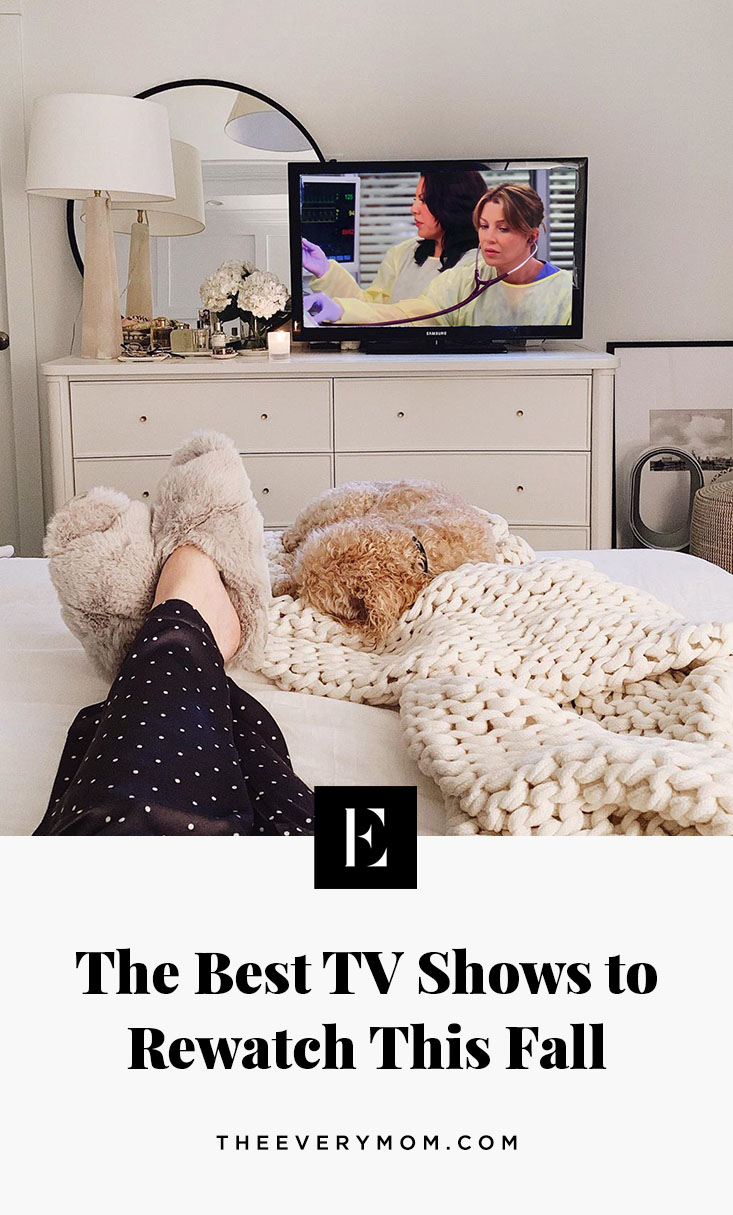 The transition into fall means two things for me: pumpkins on my front porch and the excitement of big network season or series premieres. Thankfully in the time of Netflix and other streaming services, we’re typically treated to new shows year-round. Even so, the fall holds a special kind of excitement, waiting for the new season of Grey’s Anatomy, This is Us, or my personal favorite, Survivor.

Survivor seems like it would be the ideal show to film during quarantine (all the contestants are already tucked away from society in their own quarantine pods for 30+ days), and even that show is delayed. It’s because filming and editing still take huge crews. If that show is delayed, you can bet others will be too.

Since some of our favorites might take a bit of extra time to return to our small screens, it’s a good time to rely on old favorites once the kids are in bed. In my own house, we’ve already re-watched The Office (highly recommend when you need a light comedy with your old pals Pam and Jim) and also Entourage. I’ve actually left Entourage off the below list. I did thoroughly enjoy our marathon viewing, but boy is that show problematic and basically offensive to all groups. So while enjoyable, it doesn’t top our list today. Some shows are better left in the past.

If you need a little fall television inspo, here are some of our old favorites—dramas, comedies, and spooky faves—that we’re loving for a re-watch.

Not only is Gilmore Girls a staff favorite, but it also has some stellar fall vibes, making it an excellent cozy watch this season.

If you’re missing out on real-life drama right now since you’re staying home so much, you’ll get more than enough drama from a marathon viewing of Scandal.

The perfect “feel-good yet I’m crying” kind of show that I’ve personally watched two times all the way through.

Before there were the Real Housewives, there was Desperate Housewives, and this show deserves another round of viewing.

This list is supposed to be focused on shows that have come to a conclusion, but with 16 seasons under its belt, it felt OK to add Grey’s Anatomy to this list. Those 16 seasons will keep you busy for a while. And if you catch up to current time, might as well go and watch Private Practice as well.

If you haven’t streamed Parks and Rec on Netflix, Hulu, or Amazon Prime, it’s leaving all three soon, but don’t lose hope just yet. It isn’t too late to re-watch this laugh out loud show.

Where to watch: Peacock Streaming Service (sometime later this year)

Mindy Kaling is the funny best friend we’re all searching for. Maybe this friendship will never become a reality, but at least we can spend 30 minutes with her through Hulu.

Even if you just have this on in the background to hear the music, it’s a great choice.

With only four seasons, it won’t take you too long to get through this recent cult favorite.

As a recent re-watcher of The Office, I can tell you that I literally LOL-ed multiple times during each episode. This show really holds up.

Sex and the City

SATC is just a generally enjoyable nostalgic show. I watched it during college with all my girlfriends crammed into a tiny dorm and dreamed of my future life in New York City. I was totally a Carrie. (But what 20-something thought any differently?)

Where to watch: Hulu, Amazon Prime

Alright, confession time. I kind of hated Schitt’s Creek for about 2.5 seasons. But everyone was so obsessed with it that I forced myself to power through, and by 2.6 seasons in, I also was obsessed. I think this means I need to re-watch it so I can really appreciate those first few seasons when I was full of doubt.

Sometimes you need a quirky, feel-good, light comedy and if ever there was a time, 2020 is when you need it most. New Girl fully delivers on that.

The Fresh Prince of Bel-Air

There’s nothing quite like a ’90s sitcom to set your mind at ease. The Fresh Prince of Bel-Air is returning for a reunion later this year, so it’s a good time to catch up on old episodes and brush up on your rendition of the theme song (but let’s be real, anyone who grew up in the ’90s for sure still has this memorized).

To Get in the Spooky Spirit

I did watch this show growing up and basically have zero recollection of what happened, so a re-watch would be like a whole new experience.

Where to watch: Hulu, Amazon Prime

One more long-running show we’ll add to this list: Supernatural. It’s been on for 15 seasons and will take some work to get you up-to-date.

For the ultimate spooky fall viewing, head to American Horror Story and enjoy (or cover your face with a blanket, which would be my approach).

Watch the original Charmed, watch the new version, or maybe just watch all of it.

Halloween is right around the corner, so we’ll end our list with one more vampire hit to re-watch.

Read More: The Best Scary Movies to Stream for a Spooky Night In