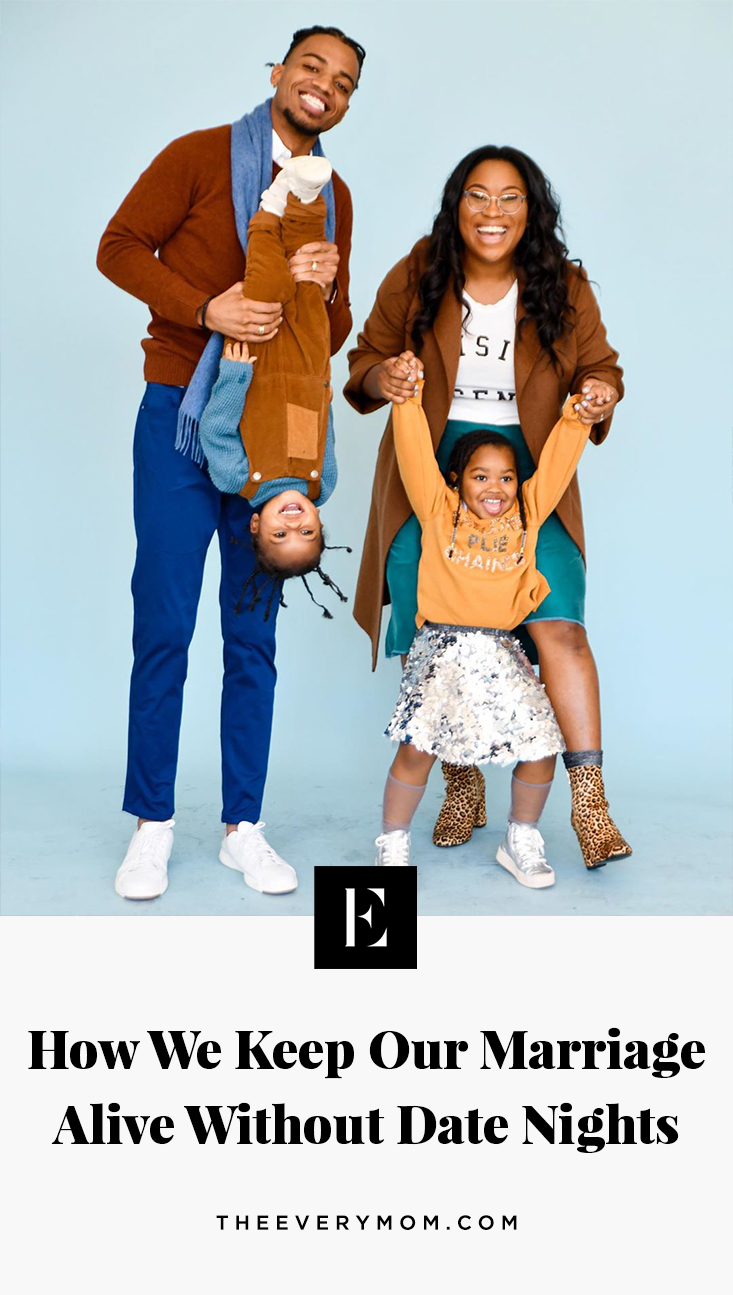 I love the idea of date nights and totally thought I’d be the type of parent that made them a priority, no matter what.

My husband and I really enjoy good food, and we love trying new restaurants and cuisines. We’ve moved twice since having children, and we’re always eager to explore the new cities we’ve called home—Portland and San Francisco—which are both bursting with a foodie culture in their own right. We love each other very much and both believe that it takes time, effort, and energy to keep a marriage healthy and strong.

But we don’t actually do date nights. We’ve gone out to lunch once without the kids since having our second child 14 months ago. But other than that, nope. And there are no date nights on the calendar anytime in the upcoming future. Date nights aren’t a current priority to us, and we’re totally OK with that.

In our current culture that holds “date nights” as the holy grail way to keep a marriage alive, I’m often found defending our choice to not do nights out with just the two of us. But I can reassure you, our marriage’s health is still on our radar, so we still make special time to be together, just in our own way. And finding a fit that is more in line with our current season of life is proving to be much better than forcing something that just doesn’t work for us at the moment.

In our current culture that holds ‘date nights’ as the holy grail way to keep a marriage alive, I’m often found defending our choice to not do nights out with just the two of us. But I can reassure you, our marriage’s health is still on our radar, so we still make special time to be together, just in our own way.

My husband and I met 14 years ago, while in college, through a mutual friend. We started dating a couple of years later and have been together ever since. Before having our two boys, we had active social lives, going out to eat and drink regularly. My husband is a true foodie and, throughout our early years together, exposed me to a variety of new foods, flavors, and cuisines; it quickly became a mutual interest of ours.

In Portland, we dove into the craft brewery scene, going to one every weekend. We’d sample a new brew, indulge in some food truck treats and hang out … with our son Bode in tow every time. He came with us on all our foodie adventures and loved exploring the family-friendly hotspots we hit up.

When Bode turned 1, we moved to San Francisco, and a few months later, I gave birth to our second son, Otis. While we love being close to the ocean and the beauty of the Bay Area, what we don’t love is the cost of living. Plain and simple, it’s hefty here. That, combined with the cost of two little kids, made restaurants a thing of the past really fast. 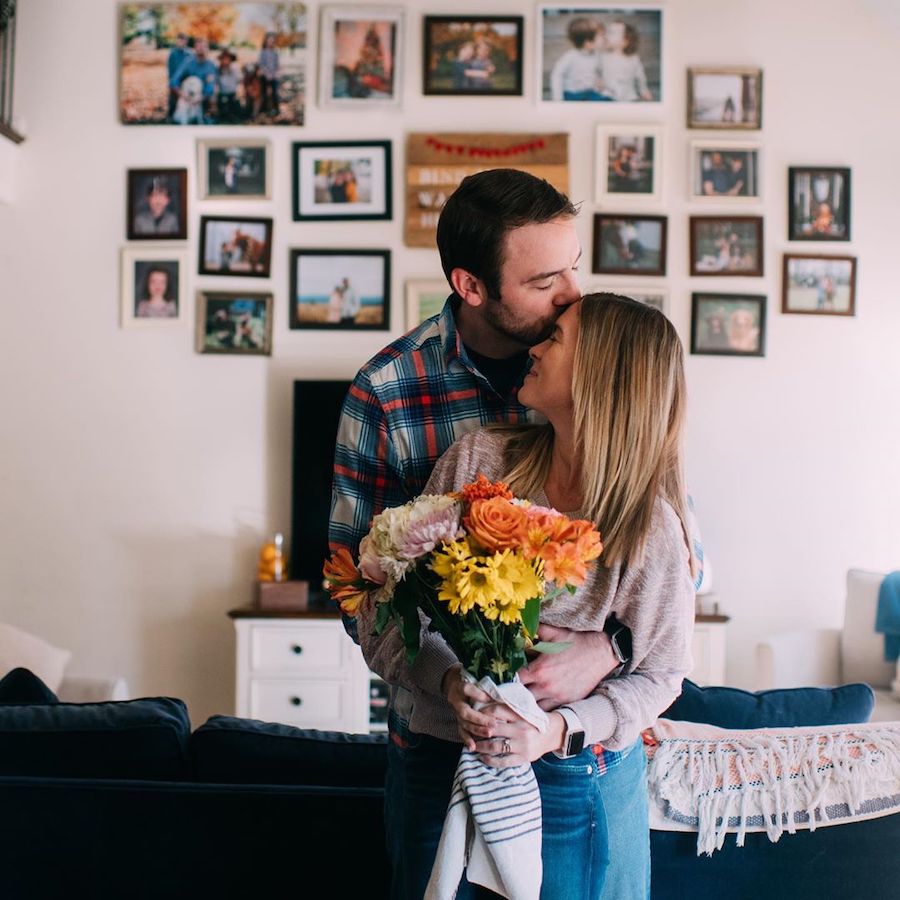 We sit here today, 14 months after becoming a family of four, in pretty much the same boat. We rarely eat out as a family, let alone as a couple on a date night. It has simply no longer become a priority. The cost of a babysitter makes it hard to justify, and if we’re going to pay that, it has to be really worth it.

It may seem like I’m ultra-defensive and super anti-date nights. I don’t say all this to argue or put down anyone who partakes in them. Instead, I say all this to explain our current stance. We personally find date nights to be risky (if the food’s not fabulous), expensive, and lastly, time-consuming. My husband works long hours and is usually not home for dinner with our kiddos during the week, so on weekends, we really treasure and protect family time. Mom and Dad don’t want to go out and miss a family dinner when they don’t happen on the regular.

So if we’re not scooting off to dine within some private couple time, how do we still focus on just us, on our marriage?

Two words: early bedtime. It has, without a doubt, been the single best parenting move we’ve done to support our marriage; I can’t recommend it enough.

We rarely eat out as a family, let alone as a couple on a date night. It has simply no longer become a priority. The cost of a babysitter makes it hard to justify, and if we’re going to pay that, it has to be really worth it.

We’ve been proponents of an early bedtime since we began any and all sleep training for both our babies. An early bedtime has been shown to be extremely beneficial for children, leading to fewer night wakings, less early rising, overall better quality of sleep, and more. But early bedtimes are also a sanity-saving boost to the parents as well. It gives us a literal break at the end of the day, an opportunity to breathe in and out, to catch up, to eat dinner together, to converse, to tidy up, all without two demanding toddlers at our sides. We love our children to the moon and back, but it’s quite difficult to have an actual conversation when they are both awake and around. Early bedtime gives us the opportunity for that and more.

We depend on early bedtime to keep our relationship in a healthy place, there is no doubt about it. It is my #1 piece of advice for new parents.

After the kiddos go to bed at 7pm, it is all about us. Some nights that means simply catching up over dinner; on the weekend nights, it usually involves TV or movie time as well. We’re not heading to the movie theater anytime soon, so we’re always seeking out good shows and movies to watch together via Netflix and Hulu. Even if it’s just each of us reading our own material, but next to each other, our evenings are that: they are spent together.

It may seem simple, but it’s life-changing when you really make the effort to be together every evening. And yes, we make this a priority almost every single evening. 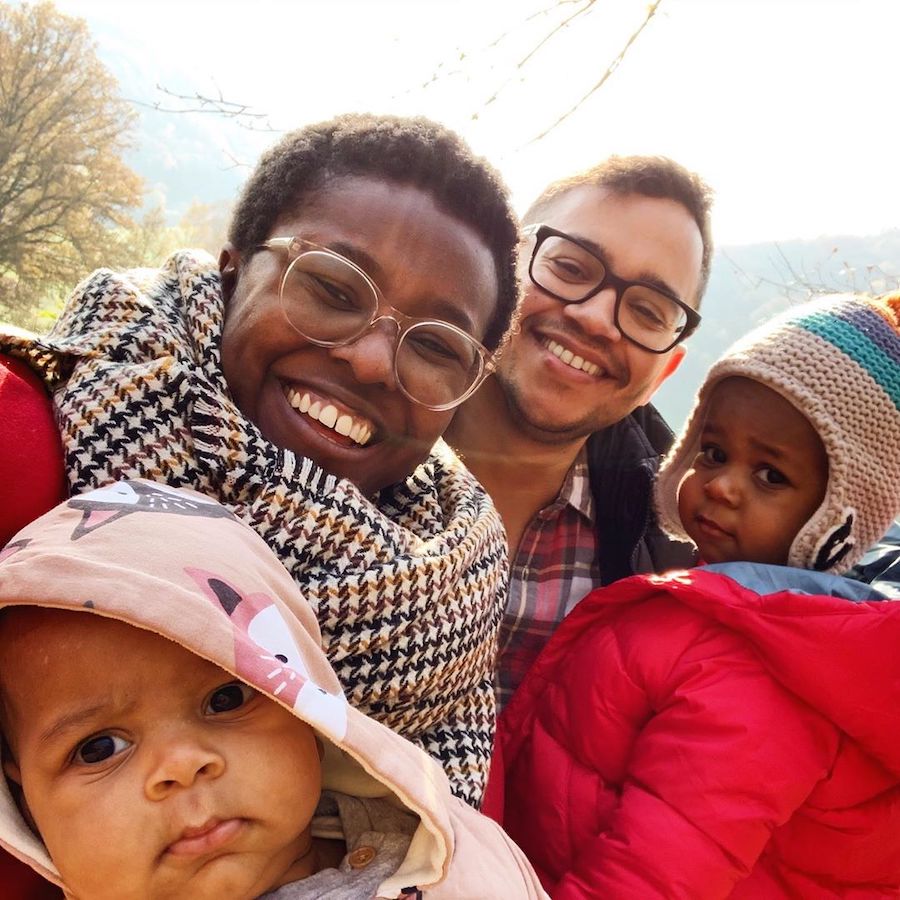 But evenings aren’t our only source of marriage support. Without date nights, we also focus on any opportunity for one-on-one time. This may come in the form of an early morning cup of coffee or reading before the “Mama’s” begin. Or weekend nap overlaps that give us a little 30-minute reprieve from the chaos. Every little bit counts, and we treasure it. We’re not partaking in deep conversations during each and every one of these tidbits of time together; we’re simply looking at each other instead of our two crazy kiddos. We’re checking in with each other, on how each one of us is doing at that moment. We’re keeping the communication lines open and active.

Date nights aren’t off the docket forever; I do look forward to the days when they make sense again, when our children aren’t so young and demanding, when work schedules may be (hopefully) a bit more forgiving, and when childcare costs don’t dent our wallet as badly. Maybe I’m being too optimistic, but I don’t think so.

For now, we’re OK with saving our dollars and staying in, as long as we’re together.

I’m fully aware that evenings at home are not the same experience as a date night, where we would be able to be without a baby monitor, fully in each other’s element instead of also folding a load of laundry and wiping down the kitchen counters as we converse. But for right now, in this season of life, we’re OK with all this. We like our evenings together as they are, and we look forward to them every single day. It’s simple and reassuring, and it fits us.

Read More: The Truth About Sex After Baby