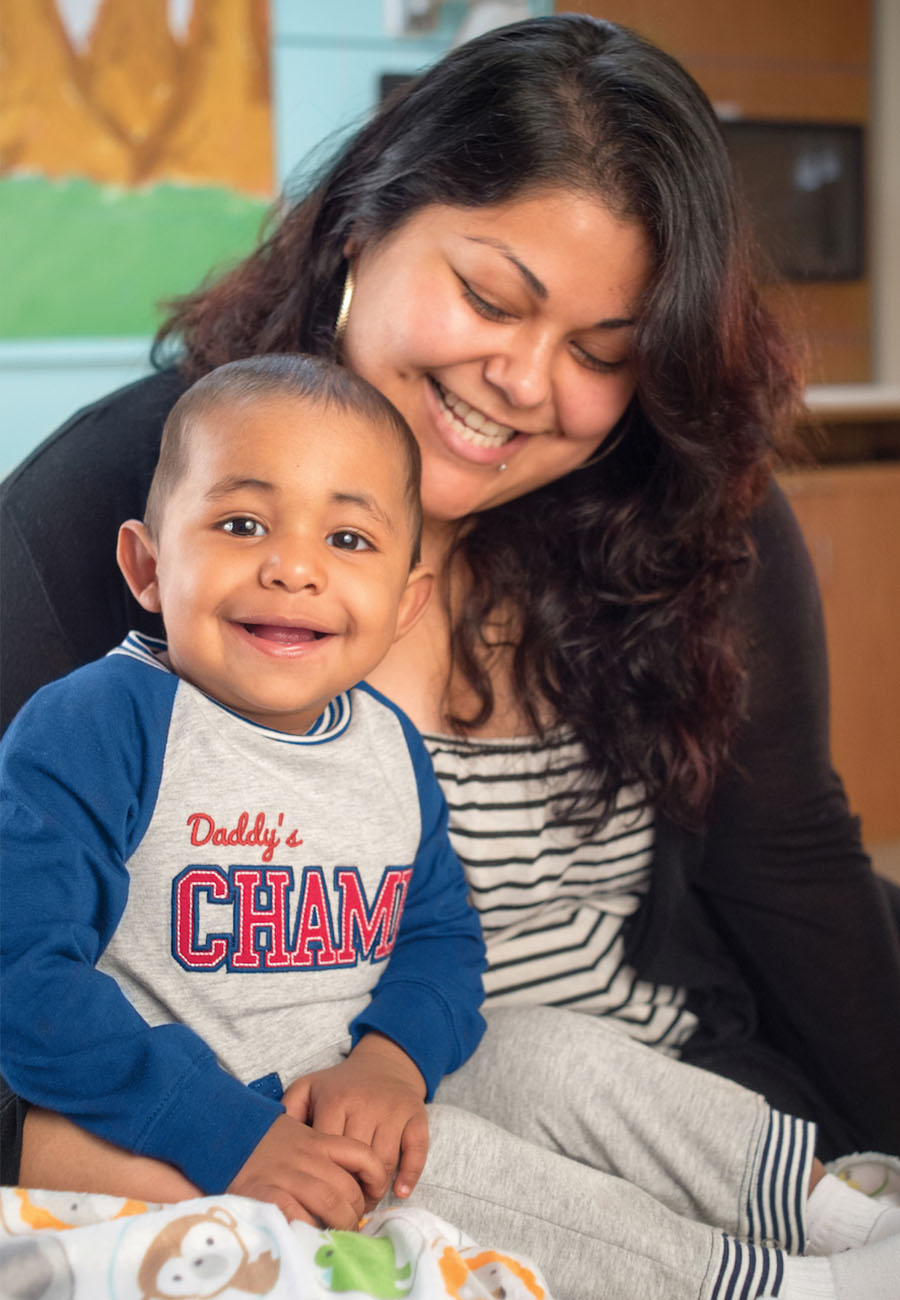 Editor’s Note: The photos included within this article were provided by St. Jude and are not of the families mentioned in order to protect their privacy. This article was originally published on May 8, 2018 and details including the children’s ages and treatment stages are stated as of the original publish date.

It is every parent’s hope that their children will be happy and healthy. No parent ever expects to or is prepared to hear that their child’s life is at risk. The devastating diagnosis of childhood cancer undoubtedly changes the trajectory of your family’s life. In the face of illness, parents go above and beyond to provide everything their child needs to fight whatever disease they are fighting.

With the help of St. Jude Children’s Research Hospital, we’re sharing the stories of five women who have been touched by childhood cancer. Four of these women have children who have been treated by St. Jude, a center leading the way the world understands and treats childhood cancer and other life-threatening diseases. Families who are being treated at St. Jude Children’s Research Hospital do not receive a bill for treatment, travel, housing, or food. The fifth woman profiled below works day in and day out to raise money to continue the fight against childhood cancer and other life-threatening illnesses at St. Jude. They all remain hopeful and gracious and we are continually inspired by their immense strength. 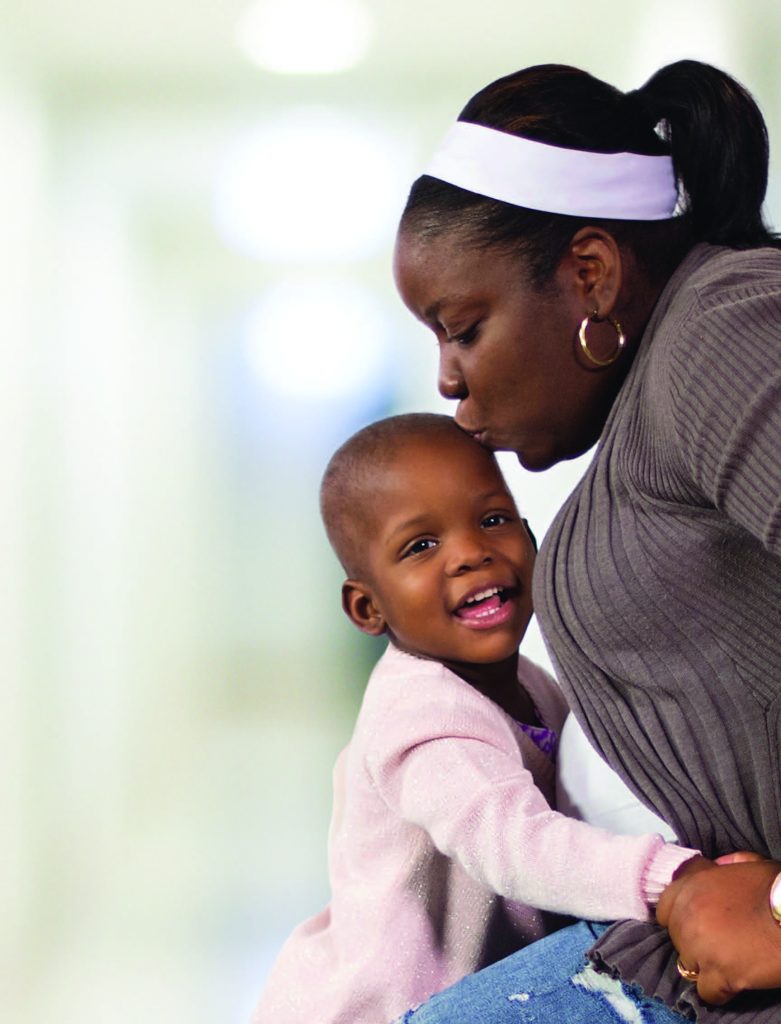 In January 2016, a dark cloud settled over Azalea’s parents, Simone and Ricardo, when they learned she had a type of cancer called rhabdomyosarcoma, which is cancer of the soft tissue. “Hearing that your 2-year-old has cancer is the most devastating news a parent could ever hear,” said Simone.

Shortly before leaving for treatment, Simone and Ricardo learned she was pregnant with their second child. “We were so happy, of course,” Simone said. “But we were also devastated because of Azalea’s diagnosis. It was a rollercoaster. There was a lot of crying and a lot of smiles.”

Hearing that your 2-year-old has cancer is the most devastating news a parent could ever hear.

Azalea’s treatment at St. Jude included surgery and chemotherapy. Beyond taking care of Azalea, they helped Simone, too, once they learned she was expecting. “They helped me find a doctor for my prenatal visits and made sure all the appointments didn’t conflict,” Simone said. “They helped make sure I was comfortable physically, emotionally, and spiritually. And this enabled me to take care of Azalea.”

While Azalea was undergoing treatment, Simone gave birth to a baby girl named Hadley, whom Azalea adores. She relishes being a big sister. When Azalea finished treatment, her family returned home to Jamaica as a family of four.

Now, when Azalea visits her doctors for checkups, the whole family comes back with her. Memphis has become a second home for them, and, by extension, St. Jude has become a part of their family. 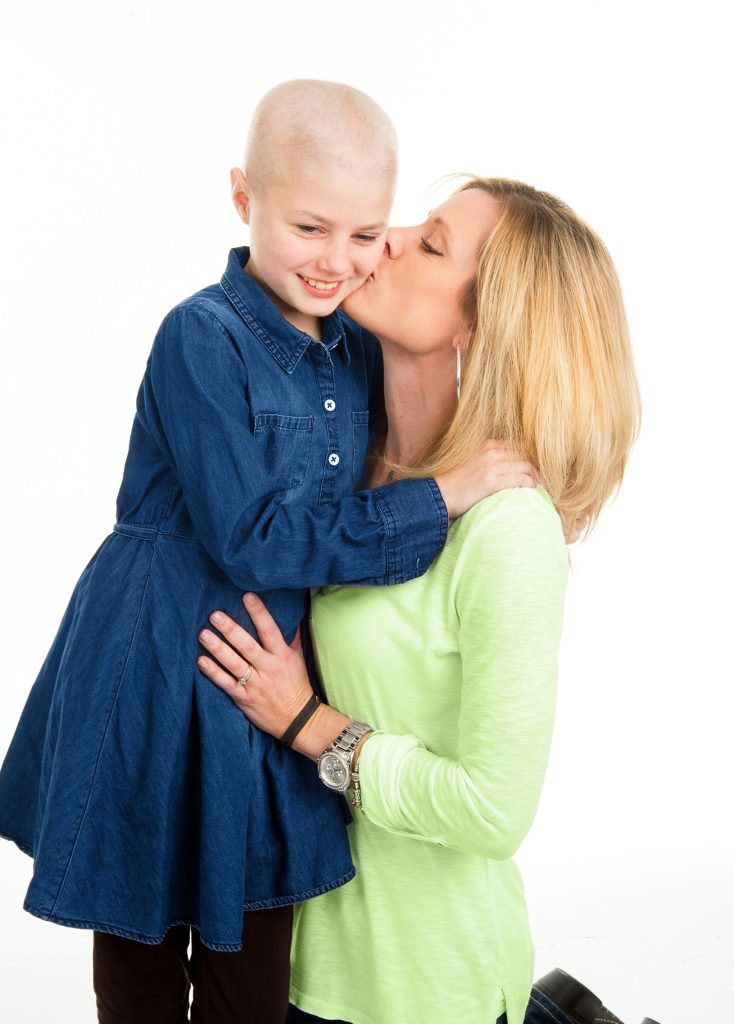 Rylee is an outgoing girl who loves gymnastics, especially the uneven bars. Always on the move, she could often be found flipping or cartwheeling in the yard. But in August 2016, Rylee started to complain that her left leg hurt and she soon developed a limp. Weeks passed and the pain remained. Rylee’s parents took her to the doctor, who ordered an X-ray and an MRI. The results revealed a mass on Rylee’s left femur.

Rylee was referred to St. Jude where doctors confirmed Rylee had osteosarcoma, a type of bone cancer. Rylee’s treatment has included chemotherapy and a limb-salvaging surgery, where eight inches of her femur and the tumor were removed and replaced with a titanium rod that will be adjusted as Rylee grows.

“You walk through the [St. Jude] cafeteria and people call Rylee by name,” Ginny said. “It’s a neat community, it’s like family. It’s not just other patients or parents asking Rylee how she is, it’s our doctors and our nurses, too.”

Ginny describes Rylee as a curious girl who now wants to be a research nurse when she grows up. After surgery to remove the tumor, Rylee expressed an interest in seeing the tumor, and her doctors arranged for that to happen. “People don’t realize how much childhood cancer affects families until they’re put in this situation,” Ginny said. 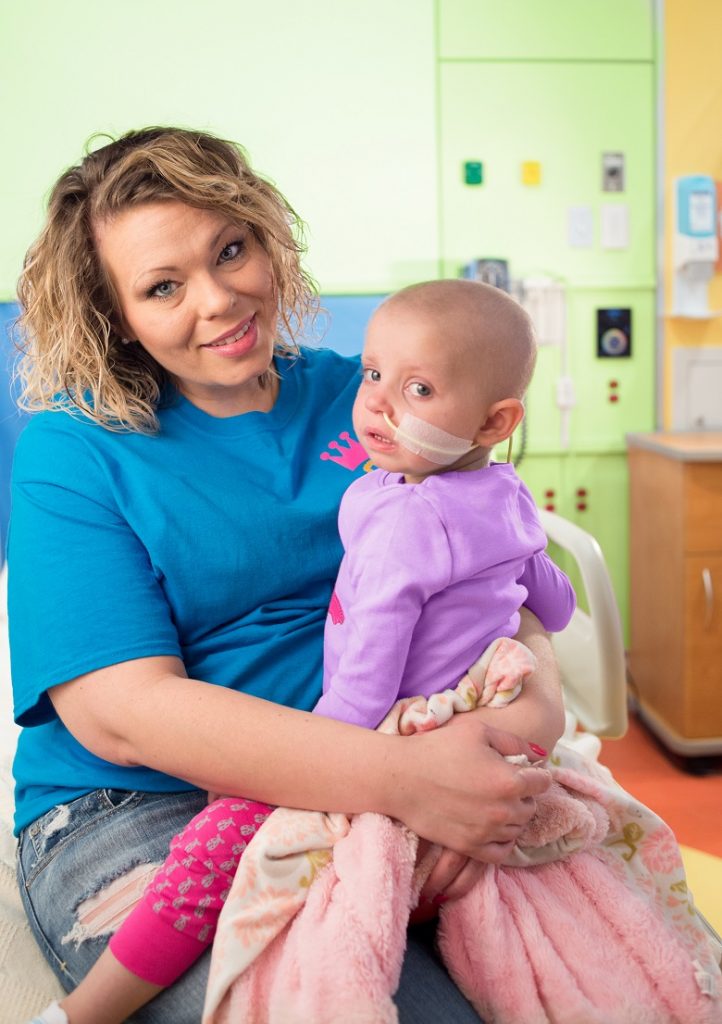 For weeks in early 2016, 2-year-old Londyn wasn’t well. Doctors thought she had pneumonia. When tests revealed Londyn was suffering from acute lymphoblastic leukemia, her parents, Kascie and Anthony, were devastated.

“Londyn came [to St. Jude] by ambulance,” Kascie said. “It was a six-hour ride. And I kept thinking, the whole time, this is not true. This can’t be happening.”

I kept thinking, the whole time, this is not true. This can’t be happening.

Londyn’s treatment includes chemotherapy, and because her cancer did not go into remission, she also received a bone marrow transplant. Kascie stays at the hospital with Londyn, and Anthony travels back and forth from home so that he can continue working.

Throughout everything, Londyn has remained a sassy, happy little girl. She loves her baby dolls, dancing and playing hide and seek. “Londyn is my sunshine,” said Kascie. 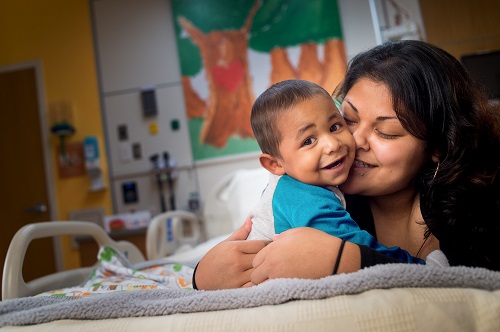 Sonia never expected her family would experience cancer. But over the past several years, she has experienced it as both a mother and a grandmother, and she’s grateful St. Jude has been there for her family during every step of the way.

In 2015, Sonia’s daughter, Heather, was diagnosed with acute promyelocytic leukemia, an extremely rare form of blood cancer. She responded well to treatment and underwent six months of chemotherapy.

Then, a year later, the unthinkable happened: 2-year-old Pepe, the son of Sonia’s daughter Tiffany, was diagnosed with neuroblastoma, a cancerous tumor. “Just when we thought that everything had passed, my grandson was diagnosed,” said Sonia. “It was very painful.” At St. Jude, Pepe’s treatment included chemotherapy. He’s finished with treatment and returns for regular checkups. 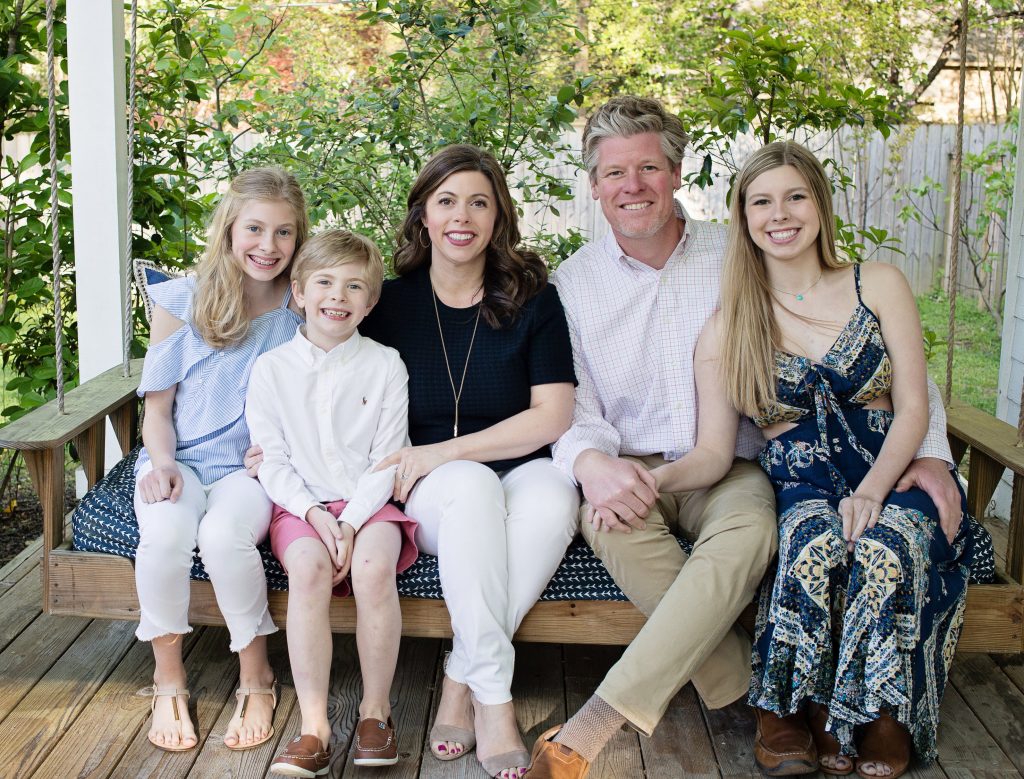 Nineteen years ago, fresh out of school, Regina started interning at ALSAC, the fundraising organization for St. Jude Children’s Research Hospital. Three kids—Celia, 14, Lauren, 12, and John Kerr, 6—and multiple promotions later, she still wakes up every day excited to help kids in need. Regina says that her favorite thing about being a mom is the bond between her and her children and that each relationship is entirely distinctive and unique. She’s always been a person to thrive on nurturing close relationships, and there is nothing quite as extraordinary as the one between a mom and her children. “What a gift,” she said of her family.

For the past 19 years, she’s gotten an up-close view of a few of the most remarkable truths of life. “The depths of love, the resilience of the human spirit, and the compassion that we are capable of in our communities,” she said is one of the things that inspire her about working at St. Jude. It has changed her perspective about being a mom: “It’s a daily whisper to remember to see the blessing.”

The hardest thing about being a mom for Regina is summoning the mental energy and presence to be consistently attuned to her children as individuals, especially given that they are constantly changing. “I want them to feel like, ‘my mom gets me.’ That’s a daily investment of effort to look up from the constant demands on my attention and try to be mindful. What are they saying, what are they not saying, how do they feel, what do they need; you have to be really emotionally present to cultivate that connection.”

Regina experiences many different types of situations and experiences that define the meaning of being a #strongwoman. “There are so many dimensions to female strength. I see it in the women around me who set their own priorities and live according to them; the women who face life’s inevitable challenges—whether the major or the mundane—with grit and a belief in their own ability to do hard things; the women who let go of excessively high personal standards and resist the temptation to over-curate the image of their lives; the women who view their world through a life lens of possibility, gratitude, and authenticity.”

According to the National Cancer Institute, an estimated 10,500 new cases of cancer will be diagnosed among children from birth to 14 years in the United States in 2021. About 1,190 children are expected to die from the disease.

If you’re interested in helping St. Jude fight childhood cancer, learn more at stjude.org/family and click the button below to donate.