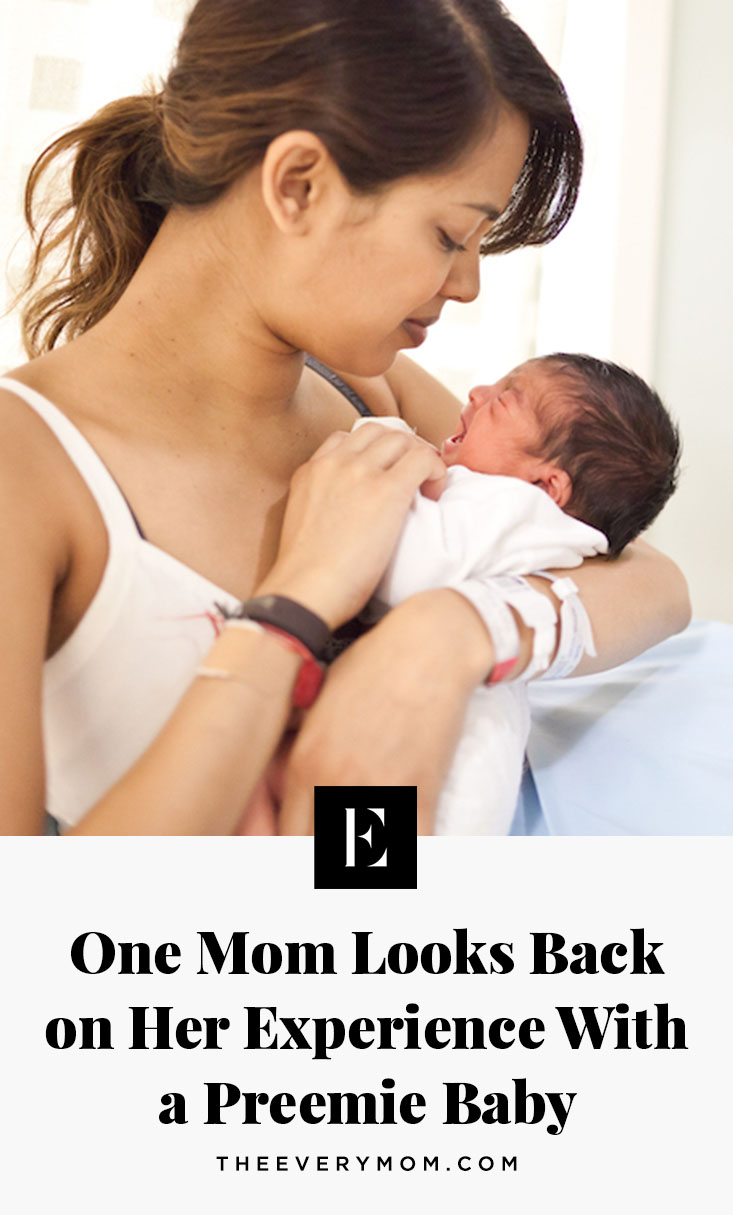 Editor’s Note: This story was originally published on July 25, 2018, before the global pandemic changed social, hospital, and NICU guidelines. Our thoughts are with all NICU families and staff living through these challenging circumstances.

My oldest son turned 5 years old a couple of weeks ago. Last weekend, we celebrated his birthday with a party with all of his little friends. As as I spoke with one of his friends’ parents regarding our decision to collect donations instead of gifts for his birthdays over the last five years, I found myself unexpectedly choked up. The reason we had initially started this tradition, by collecting toys and supplies for our local children’s hospital for his first birthday, was to show our appreciation for his health and to shine some of that gratefulness outwards, into the world.

You see, my first baby was born prematurely. Though he was born at a healthy 6 lbs. 4 oz. at the tail-end of 35 weeks, he spent a week in the NICU due to his abrupt entrance into this world. I’ve often struggled to talk about my experiences with preterm labor because, in the overall picture, we’ve been fortunate. We had a generally healthy newborn who just needed some extra monitoring and tests, and a second healthy newborn who was born at 38 weeks thanks to doctor intervention (and successful medically-stopped labor at 30 weeks).

Each time I tried to bring up my experience with friends, they attempted to reassure me in the best ways they knew how: “But, he’s fine now!” “It’s in the past, enjoy what you have!” “You need to move on, you have two beautiful babies!” I knew they were right in many ways, and so, I stopped talking about it. I repressed those emotions, feeling guilty for thinking I had gone through something dramatic when others go through much worse.

But in small moments, like talking to that parent at the birthday party, I realized that my experience as a mother of a premature baby was actually much more traumatic for me than I allowed myself to believe. In hindsight, I wish I could tell the past me what I know now, and if I were going to, this is what I would say:

I see you sitting there alone in your hospital room. You’re in the maternity ward, but out of all of those newborn babies whose cries echo through the halls, not one is yours. Your sweet boy is upstairs in the NICU, but you haven’t seen him yet. 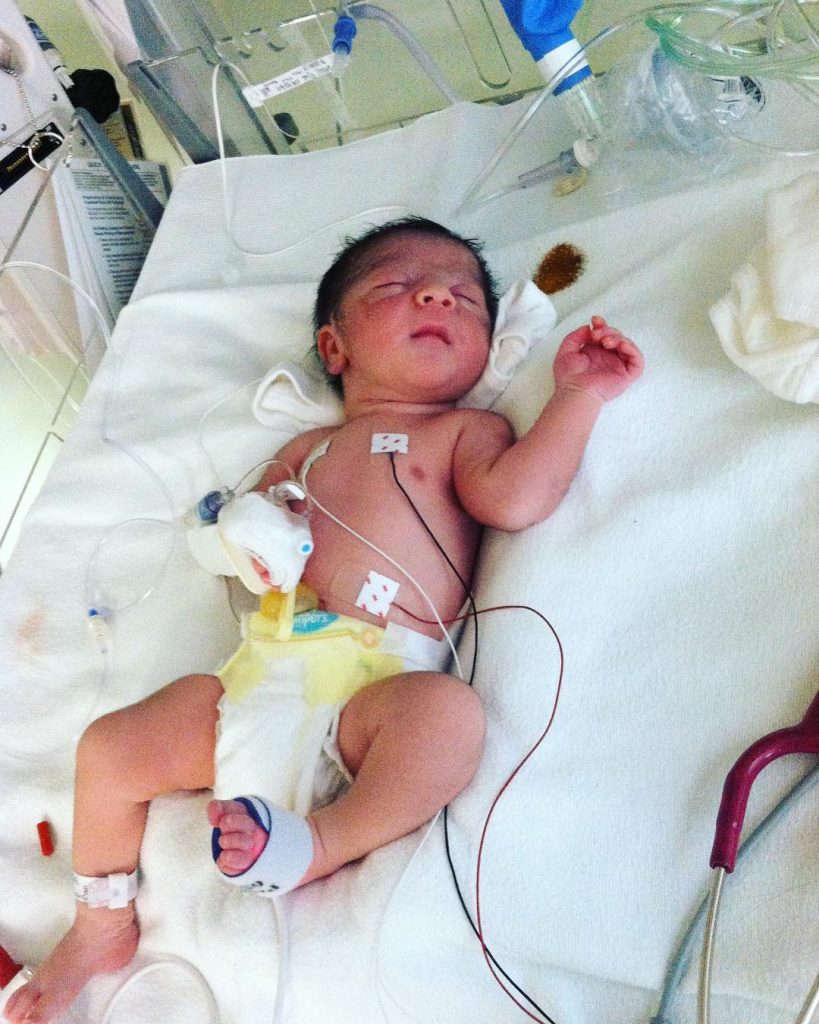 You’re hurting, I know—weary from labor, in pain from the c-section, emotionally beaten from the whole experience. I know you’re worried, feeling defeated, and confused. Don’t try to be strong, don’t think you have to hide your tears. It’s OK to feel all of those things.

When you finally get to go upstairs to see your little babe, you’ll be overwhelmed to tears. It’s surprisingly loud in there—monitors beeping, nurses shuffling around, babies screeching as they’re poked and prodded for exams. A nurse will take your boy out of his isolette and hand him to you, but with all of the wires and IVs attached to him, you won’t know where to put your hands. You won’t know how to hold your baby and it will hurt your heart for a long time.

You’ll resist taking pictures. This isn’t what you want to remember. The NICU will feel cold and sterile and loud and you’ll wonder why your baby’s first moments in this world have to be everything you never wanted. With every IV, echocardiogram, finger prick, and blood draw, you’ll blame yourself.

The NICU will feel cold and sterile and loud and you’ll wonder why your baby’s first moments in this world have to be everything you never wanted. With every IV, echocardiogram, finger prick, and blood draw, you’ll blame yourself.

Let yourself grieve for all that you thought you’d have—the vaginal delivery, the immediate skin to skin contact, the ability to hold your baby day and night. But, know this is not your whole story, nor is it his. It’s just the beginning, a momentary blip on the radar, and what comes next will be the most incredible experience of your whole life.

Soon, it will be time for you both to go home. But, you won’t look forward to that day the way other mothers do. You’ve barely held your own child. You haven’t changed him once. You’re terrified of doing something wrong, of hurting him, of coming to terms with your role in his prematurity. When your doctor comes by to release you, you’ll ask her with teary eyes why this happened. “We don’t know,” she’ll say gently, “We don’t always know.” You’ll hate that answer.

You’ll struggle in the months to follow. Breastfeeding will not be successful due to your little baby’s weak suck. You’ll stay vigilant, bringing him to your breast at each feeding, coaxing him to nurse with tears falling down your cheeks. You’ll attach yourself to a pump day and night to produce milk with which to feed him, and the cycle will leave you broken from exhaustion and aggravation. You’ll cry in the shower, from pain and frustration, as you try to break up clogged ducts in your breasts with scalding hot water and your own hands.

Eventually, you will give up nursing, and it will hit you hard.

Once again, you’ll blame yourself. 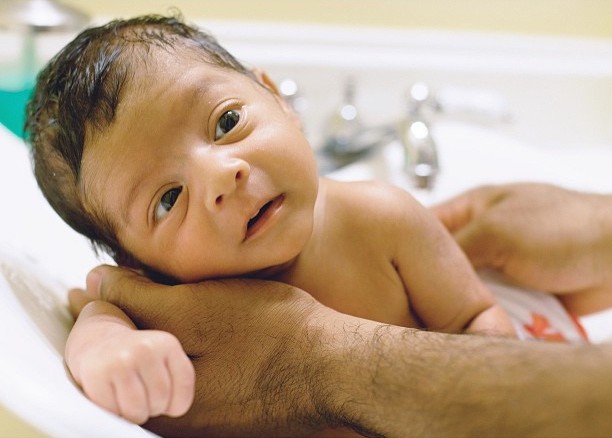 You’ll begin to resent every pregnant woman who says she can’t wait to get that baby out because if you could change one thing in the world it would be to have been able to hold yours in longer.

You’ll take every nonchalant remark about your “easy” c-section delivery and “easy” formula-filled bottles personally. You’ll think they’re an attack on your abilities as a mother, but you shouldn’t. Comments like that are just born out of ignorance.

Be gentle with yourself. You’ve been through a lot. So has your son. You both will get through this.

Be gentle with yourself. You’ve been through a lot. So has your son. You both will get through this.

At first, you won’t be able to see through the fog on the road ahead. You’ll constantly wonder what his life will hold. You’ll wonder what obstacles he’ll face where the root cause will be his prematurity.

When your amazing pediatrician shrugs off his minimal height/weight gain at every appointment, saying “He’s fine, he’s just small,” you’ll nod, but you won’t agree. You’ll tell yourself he’s small because he didn’t have enough time. You were supposed to give him more time.

With each one, you’ll blame yourself.

When your baby’s occupational therapist tells you that his sensory issues are likely a result of his prematurity, it’ll feel like a punch in the gut.

He needed more time, and you’ll blame yourself.

But, it’s not your fault. You did you best to keep him safe, to protect him in all the ways you could, but some things are just out of our hands. If having a baby in the NICU will teach you anything, it’s that.

Things are sometimes just out of our hands. 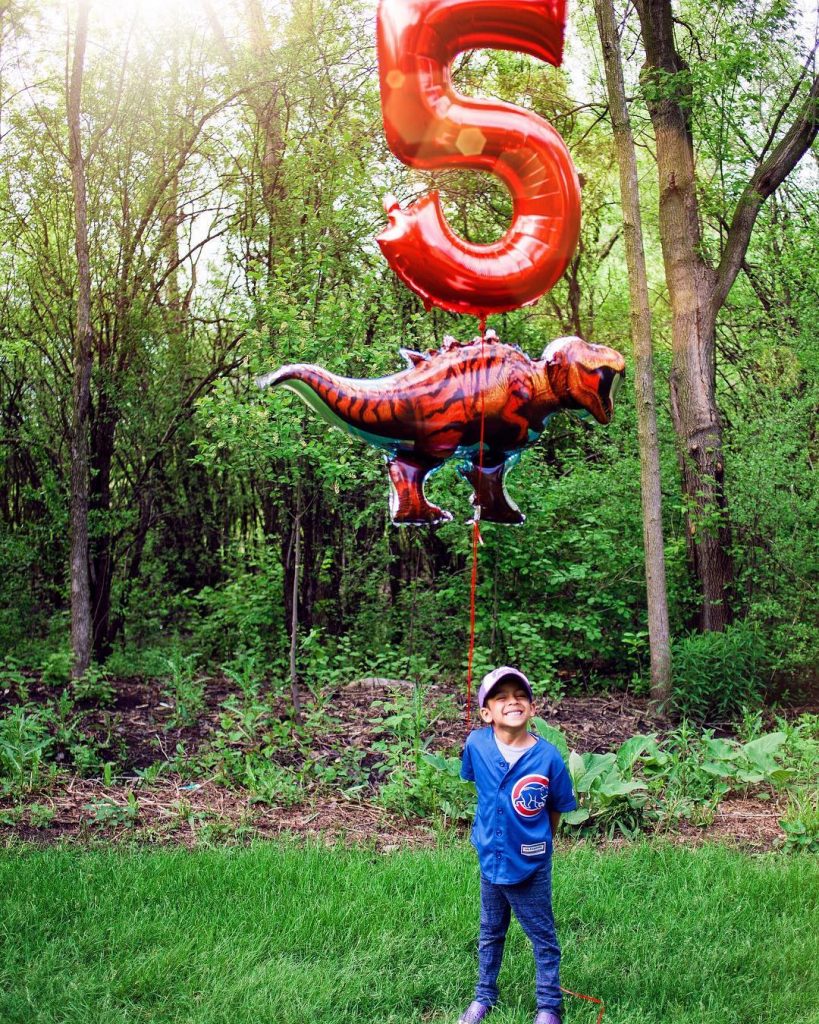 As your baby continues to grow, you’ll fall deeply in love with him. You’ll learn how to hold him and then you’ll resist putting him down. You’ll touch his tiny hands and feet over and over again, remarking at his beauty and softness. You’ll stare at him when he’s sleeping, stroking his hair, wondering how something so perfect could be yours.

You’ll begin to learn how to be his mama.

Remember that you will find your place, and so will he.

You’ll think you aren’t the right mother for him, but you are. You’ll think you’re not a good mother because he came early. But, you are. Remember that you will find your place, and so will he.

He’ll get stronger every day. He’ll walk early, and then he’ll run. He’ll climb and jump and swing. You’ll hold your breath each time, waiting for something to happen—for him to fall and for your world to come down. He’ll fall, but you both will be just fine.

He’ll learn to talk, and then he won’t shut up. He’ll draw and build and ride a bike. He’ll play every sport with enthusiasm and a certain amount of natural skill. He’ll learn to read and write and his memory will astound you.

But, you’ll still struggle with his diagnoses and differing abilities. You’ll juggle inhalers, nebulizers, and adaptive equipment for kids with sensory-related needs. You’ll spend late nights researching chewy toys and weighted blankets and bumpy cushions, wanting to help him in every way you can. You’ll watch him rock his body back and forth all day, silently begging for sensory input, and your heart will break.

You’ll constantly feel at a loss of how to support him, but you’ll keep trying.

He’ll continue to grow, and he’ll turn into a pretty cool kid. He’ll love the Beastie Boys, Lady Gaga, and Hamilton. He’ll say that one of his favorite things is to watch BBC documentaries with you on the couch. He’ll become an incredibly compassionate brother. He’ll frustrate you endlessly and forgive you each time you lose your patience. 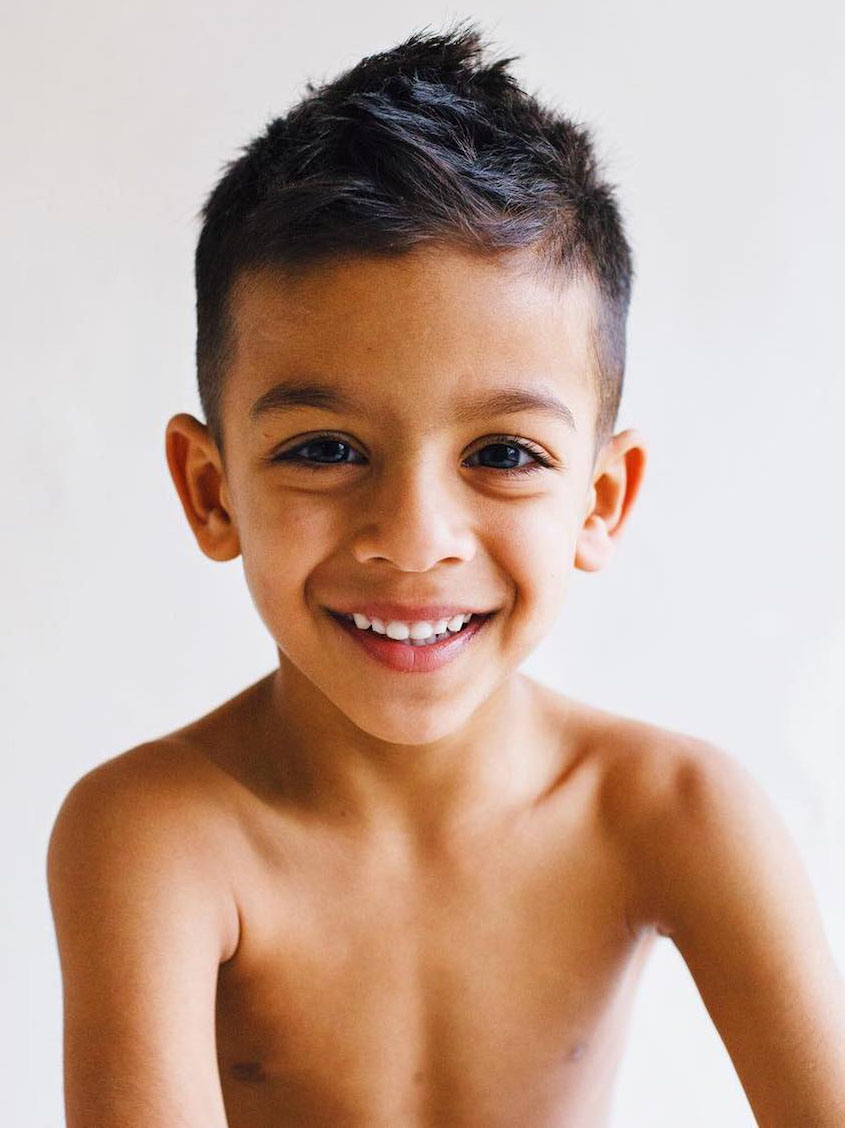 Soon, he’ll join a baseball team. You’ll notice he’s the youngest and smallest kid on the team, but no one else will. You’ll watch him on the field, and he’ll seem to stick out from his teammates. His body in constant motion, his inability to stand still, his inattention even for a game he loves. He needed more time, you’ll think. He wasn’t ready to be born.

But then, he’ll swing the bat. He’ll connect and as the ball flies down the third base line, you won’t be able to stop the tears from streaming down your face.

The worry, the fear, the anxiety will all fly away at that moment. You’ll feel nothing but immense pride and intense love for this little boy that is everything you never know you needed.

He is yours—your wild and precious boy, and you both have made it here together.

Mama, right now you sit next to your baby’s isolette, in that cold, sterile NICU and you grieve. Be patient with yourself as you take the time you need to accept your experiences for what they actually were and not what you thought they would be. When you’re ready, let it all go—because what you’ll walk out of that room with is a life and love more consuming and remarkable than anything you could have dreamed.

One day soon, you’ll look back on this time and feel nothing but immense appreciation for all of the people and serendipitous circumstances that brought you to this place, at this time, with this little boy. It feels too raw now, I know. But, you’ll get there.

And, if you could know then what you know now, you would gladly weather the pain all over again.