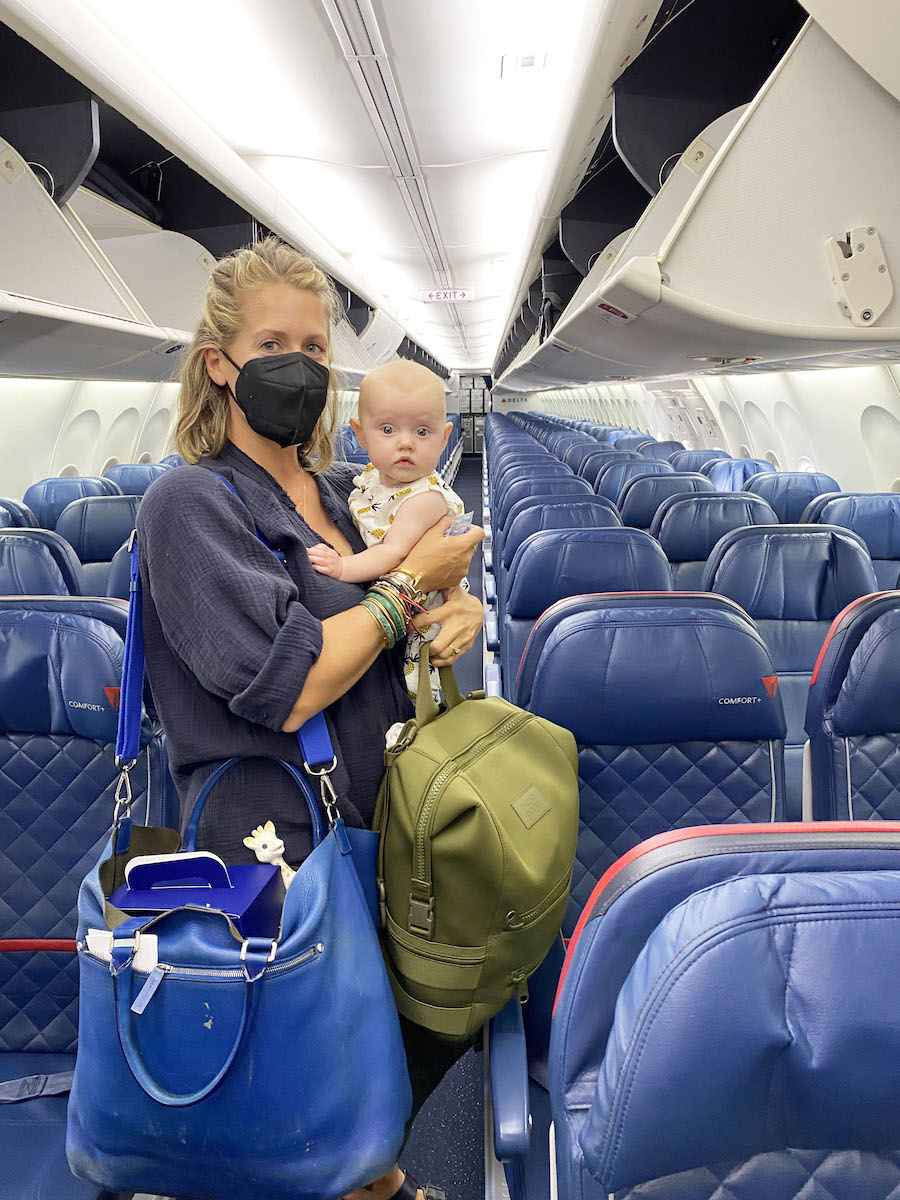 My daughter, Indah, is 13 months old and has been on 31 flights—from jumbo jets to toy-sized propeller planes and everything in between. Crazy, I know, especially during a pandemic, but hear me out: As a travel writer and a nursing new mom, my first baby had no choice but to cozy up for the ride. Since her first flight at 4 months old—on which she hardly made a peep (thank goodness!)—Indah has accompanied me on dozens of hotel tours, adventured through three African countries, visited Mexico twice, and is about to add Indonesia to her passport.

Our inaugural flight was from Los Angeles to Hawaii for a 15-day trip that coincided with the start of a major sleep regression (whoopee!). Initially, though, she acclimated beautifully over three days, naturally waking an hour later each morning as we pushed bedtime by one hour a day (then, out of nowhere a full week later, the regression began, so I don’t blame the travel!).

For some parents, the fear of baby sleep disruptions or jet lag is enough to prevent them from going anywhere until their children are old enough to be reasoned with. But I wholeheartedly feel that the rewards of travel are far richer than the risks.

Even after this many flights, Indah is just as jazzed to be on a plane, so I don’t think it’s ever too late to start, especially when you’re armed with tons of snacks—and I mean tons, because snacks pass the time and time is always in great supply on a flight. But stocking up on food is just one way to achieve aviation success.

But first, a little encouragement for parents embarking on their first flight with baby: Remember, every little coo, yelp, and whine your baby makes sounds 100 times louder in your ears than to the rest of the passengers. I’m being serious. Even on the flights where I cringed and stressed over what I perceived as our fussy, loud baby, we got compliments on how calm and wonderful Indah was. The biggest lesson I’ve discovered is that people are mostly super kind, understanding, and even sympathetic to parents and young kids. Chances are, they’ve been in your exact shoes. But, of course, you have to survive, too. Here are some tips and tricks that have helped us make every trip a pretty darn pleasant one. 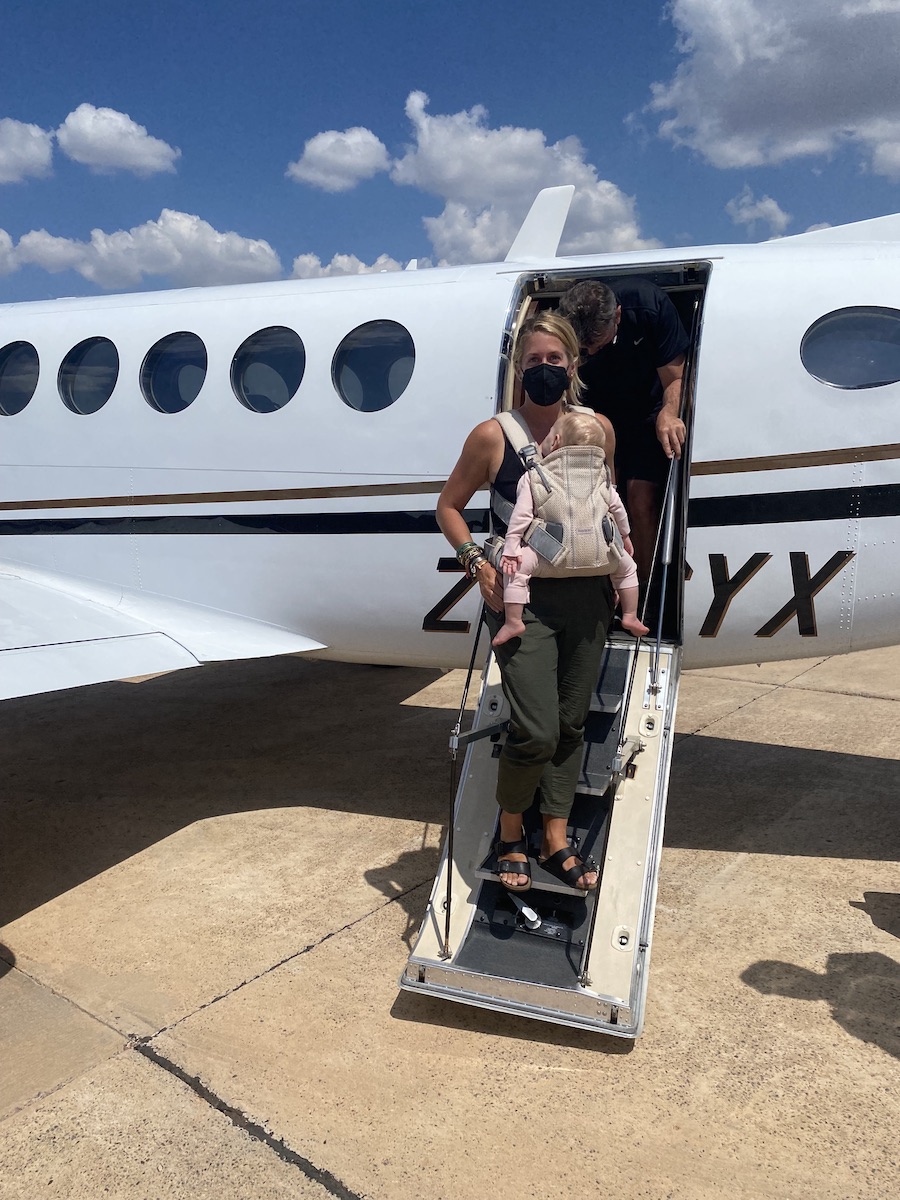 With a baby on board, packing for travel takes on a whole new shape. I’ve gradually learned to minimize a bit, especially when it comes to outfit changes since you can track down a washing machine or laundromat almost anywhere. But we always pack enough diapers and wipes for our entire trip.

Depending on the duration, check an entire box, stash your supply in a lightweight collapsible backpack, or split them between bags. As you go through diapers, you magically gain space for souvenirs or shopping purchases. Be sure to pack twice as many diapers as you think you’ll use in your diaper bag carry-on. On our trip to Africa, we underestimated, and in trying to make the supply last, we ended up with a wet one so heavy it soaked not only Indah’s clothes but also my pants—which brings me to my next point: Carry on an extra outfit for baby and yourself if you have space. I also stash travel packs of wet wipes and sanitizer in every piece of hand luggage.

Carry on an extra outfit for baby and yourself if you have space.

When you make your seat selection, unless you can get the whole row to yourselves—the holy grail of economy flying with a baby!—request the aisle. You do not want to be in a window seat with a sleeping stranger barring your exit when it’s time for a diaper change! Another tactic: When checking in, politely beg for a row with an empty middle so there’s a place for baby to potentially sleep (or to use your car seat for an infant). 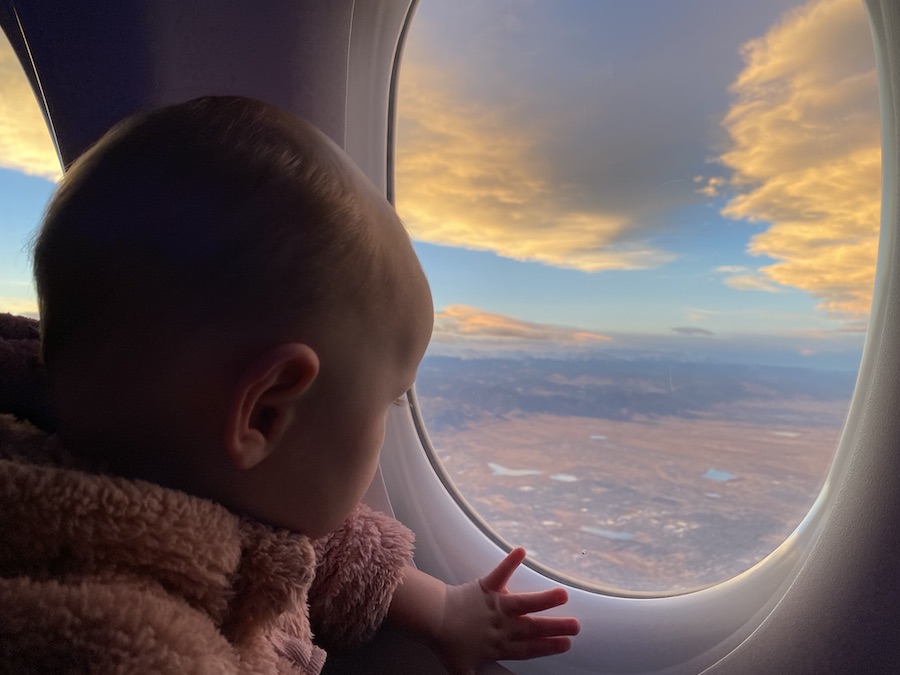 Do take advantage of early boarding. I usually strap Indah into our Baby Bjorn carrier before starting the process so the stroller is empty to gate-check without holding anyone up (some friends swear by travel strollers that fit in the overhead compartment).

We appreciate not feeling rushed while getting situated and thoroughly wiping down the entire row—don’t forget the window shades, tray table latches, seatbelt buckles, and flight safety pamphlets, which all double as toys (A tip for older kids: Give them wipes to do it themselves for a time-consuming activity resulting in super-clean surfaces). If your baby is, like Indah, obsessed with waving, it’s also fun for them to watch others board. She’s like an unofficial greeter waving at everyone as they pass.

If you’re nursing, plan to breastfeed during both takeoff and landing to help your babe’s ears deal with the changing air pressure. Otherwise, pack a couple bottles of milk or formula.

I like to layer a henley-style tank and a loose button-down shirt so I can be fairly modest without messing with extra accessories (and, to be honest, the more flights we take, the less I care what other people think). I even took my nursing pillow a few times and, to be honest, it made the whole flight much comfier and doubled as a barrier that kept her upright. Once Indah began eating more food, we could get away with a snack plus her Beaba straw bottle with water (which I love because the flip top protects the straw from germs) during the descent. 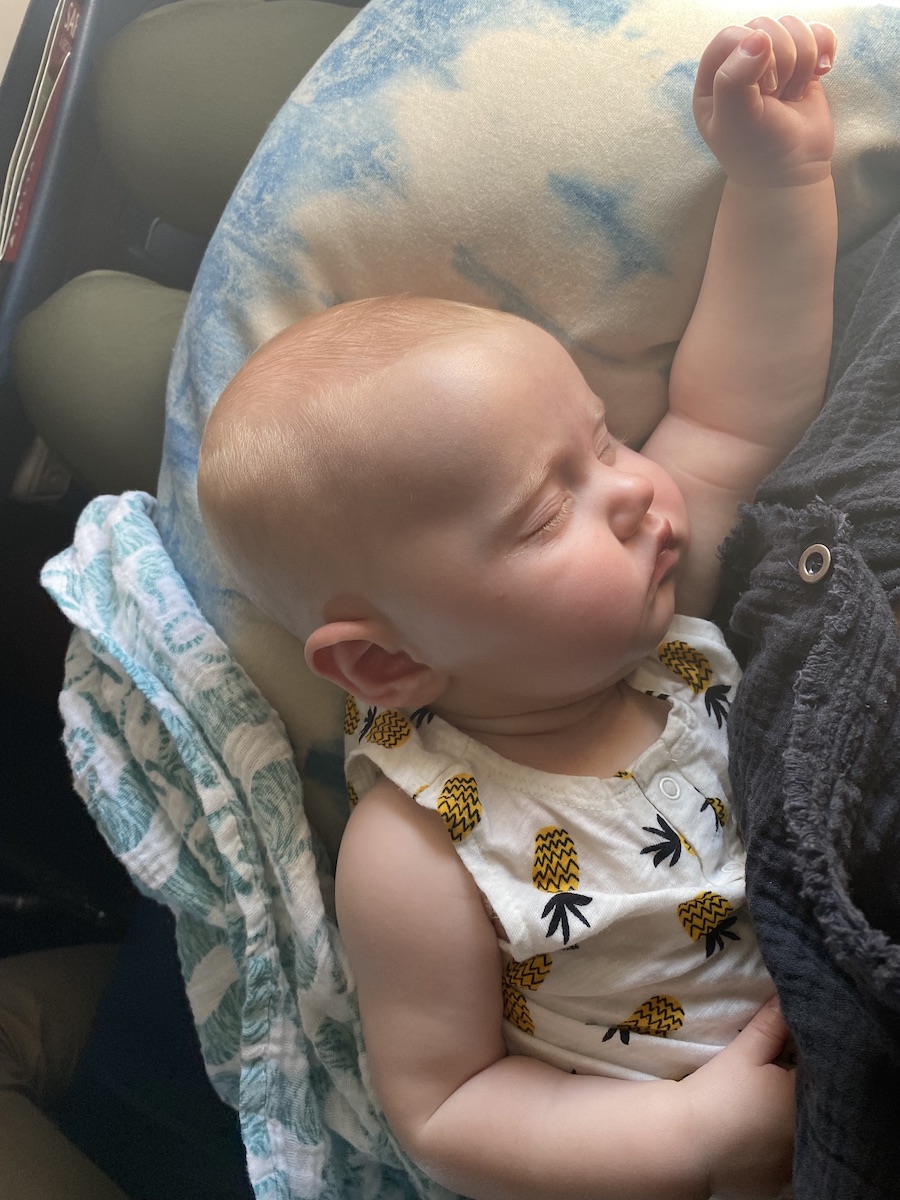 I’ll let you in on a secret: Regardless of whether a flight is 90 minutes or nine hours, it will feel endless at times. But you will eventually land—I promise. We’ve adopted several strategies to make it through. Here are a few dos and don’ts for the flight:

First, we take movie-length turns being “in charge” of Indah. Essentially, my husband watches a movie or works while I keep her busy, and then we swap.

Do: Let Them Explore (Safely)

In this totally bizarre new bubble, many babies are overstimulated and over-excited, and that means they’re going to want to explore everything. It’s party time! The more you resist, the more you’ll fail, so let them touch things—that’s why you wiped it all down!

It’s not always possible, but when the airline gods smile on you with the gift of an extra seat, it’s a game-changer. It can be a cozy little bed with the help of a blanket, but once Indah could sit up, we’d lower the tray table and she’d happily sit, playing with what was essentially trash: half-empty water bottles, napkins, snack wrappers, and empty wipe packages (we stack up our carry-on bags to fill the gap between the edge of the seat and the other seat back to prevent potential falls). Don’t underestimate the power of free, unremarkable stuff to entertain your kid. When she could pull to standing, she entertained herself by aimlessly poking at the TV screen and adorably waving at people behind us. 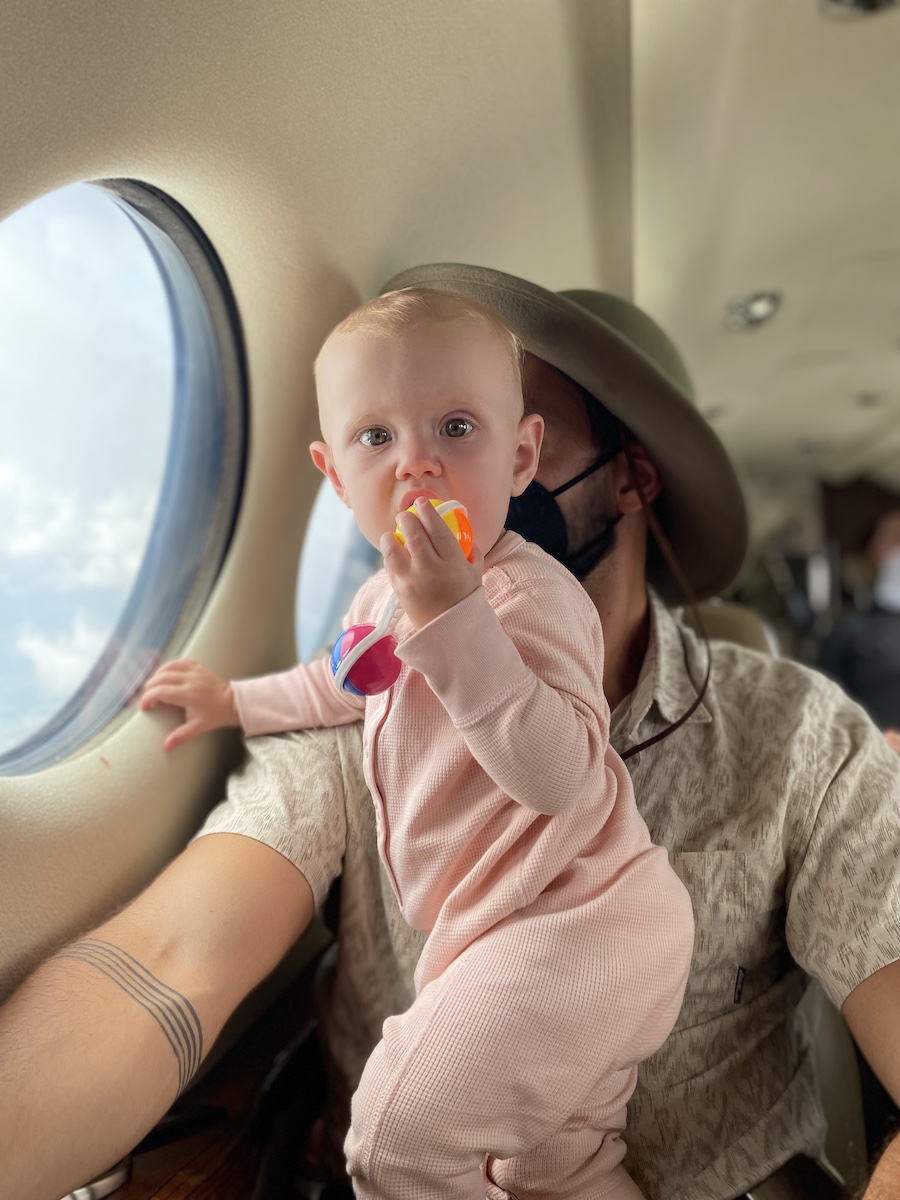 A big don’t: noise-making toys (of course, anything can be noisy if baby bangs it on the tray table like Indah did when she was going through a spoon obsession phase). There are plenty of fun, quiet toys. Stash trinkets (like Sophie the Giraffe) in every bag so there’s always something easily accessible. Small board books are great, especially once your child learns to turn pages. And the most benign office supplies can be thrilling: Post-its, for example, which kids love to harmlessly stick everywhere. If you can, save a new toy and surprise your little one with it on the plane—it should hold their attention longer. And for entertaining toddlers on planes, wrap small knickknacks in aluminum foil and stash them in seat-back pockets as a surprise discovery to unwrap and play with.

Do: Bring Snacks on Snacks

Don’t be alarmed if your baby seems to want to eat constantly. Indah is always like a Hungry Hungry Hippo on planes and demands far more milk than on land. But hey, if it helps her stay chill and quiet, then I’m happy to do it. When she was younger, we always brought a bottle too, so I could get some breaks. It’s rare you get actual food on a domestic flight, so this is the one category I say you can over-pack in!

I love Cerebelly’s pouches since I know they contain good, quality food (unlike the cookies and Cheez-Its us adults munch on in planes). Plus, she plays with the pouch for a good 20 minutes before and after eating. Since Indah grew teeth, we’ve become obsessed with Cerebelly’s chewy Smart Bars since they don’t crumble or get crushed, spill, or have to stay cold. Cheerios are an awesome drawn-out snack, though at least a dozen always end up ground into the carpet, eliciting slight guilt.

When it’s time for diaper changes or a potty visit, most airlines will (kindly) allow you to use the first-class cabin bathroom, so don’t be shy or torture yourself waiting in long lines in the back of the plane. I always dress Indah in a one-piece with snap legs or a zipper so I don’t have to remove pants with nowhere to put them in the teeny bathroom and teenier changing table. Socks or booties are imperative, not only to keep their feet warm but also to keep them clean while standing, cruising, or walking. 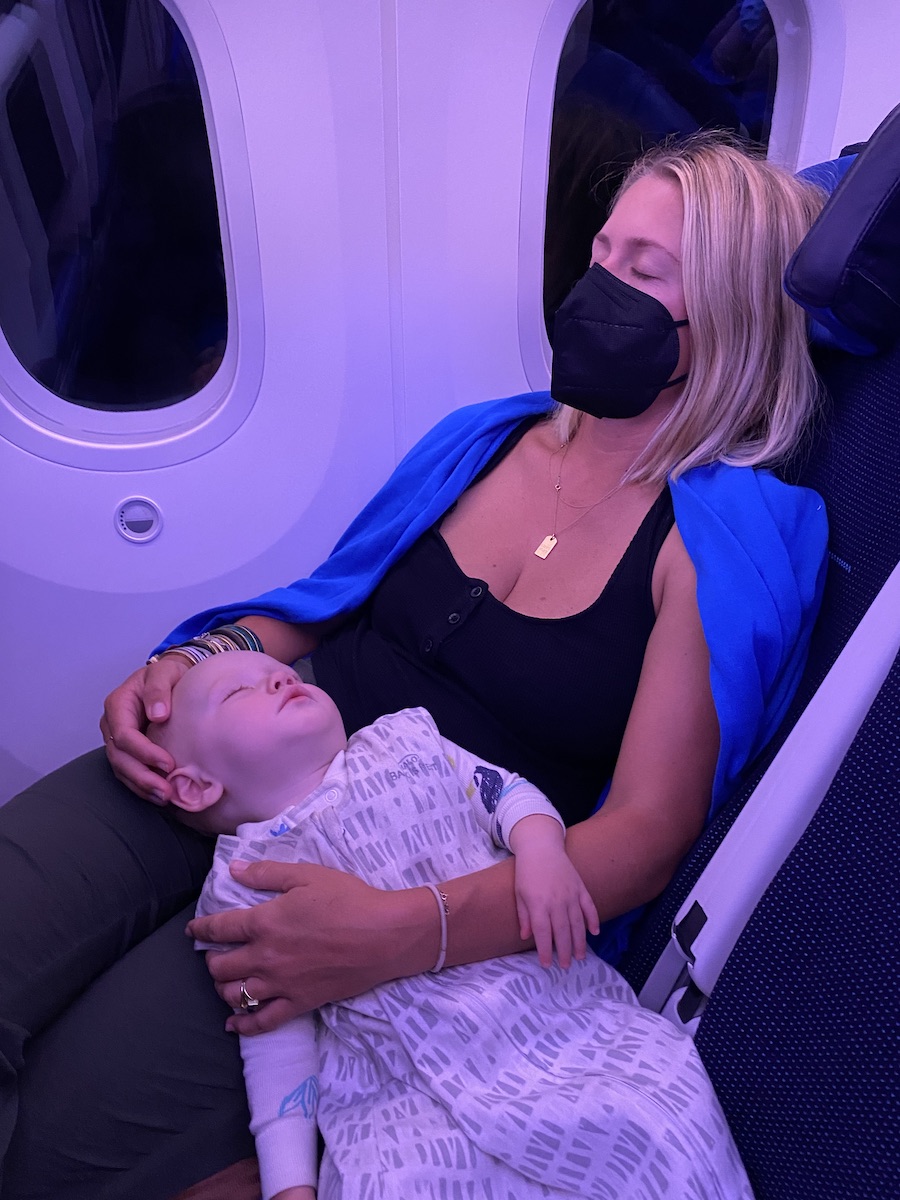 Try not to obsess over your LO getting much sleep on the plane. It’ll drive you insane and I swear they sense your anxiety rising as the meticulously planned-out nap time approaches, and they’ll fight it even harder. My most difficult moments on planes with Indah have been when I was trying to force her to sleep instead of going with the flow and letting her excitedly explore and tire herself out.

On an 11-hour flight to Amsterdam, for example, she only slept two hours! But on the following 11-hour flight to Cape Town, she was out for almost five hours and actually adjusted to the new halfway-around-the-world time zone in one day, falling into a normal rhythm I honestly believe was because she was so sleep deprived.

Quite often, Indah naturally fell asleep on me either in the carrier or just laying on my chest, and I can’t tell you how many of those times I was in pain with a full bladder. If your child seems sleepy, make a bathroom run before letting them doze! Try doing a bedtime routine complete with a sleep sack if you really want to make a solid attempt at “nighttime” sleep. Lastly, on long international flights, consider sitting in different rows—perhaps one in a bulkhead with a bassinet—so you can take turns sleeping undisturbed. Yes, the trip might be a little less fun, but aren’t extra Zs for you all worth it? 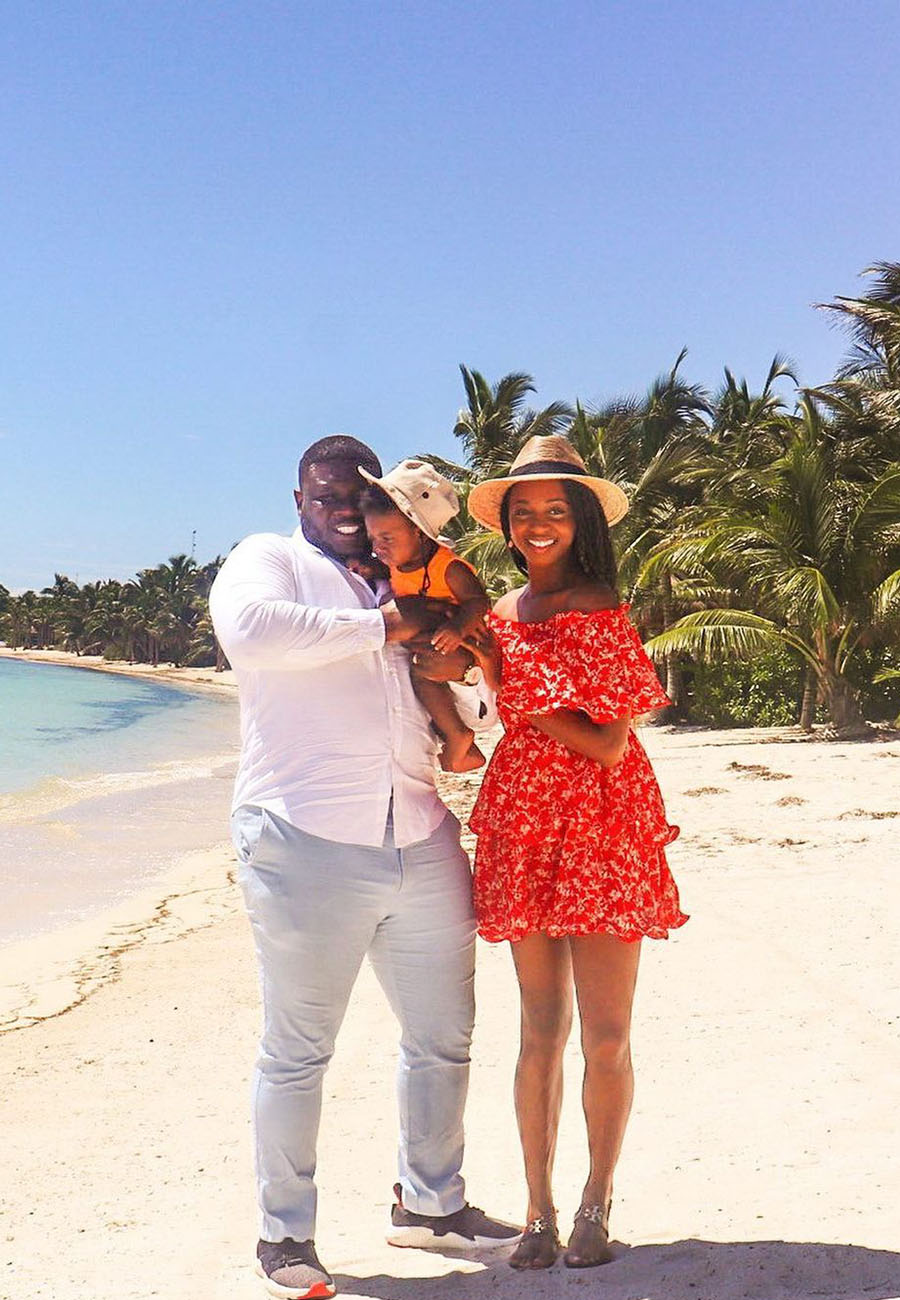