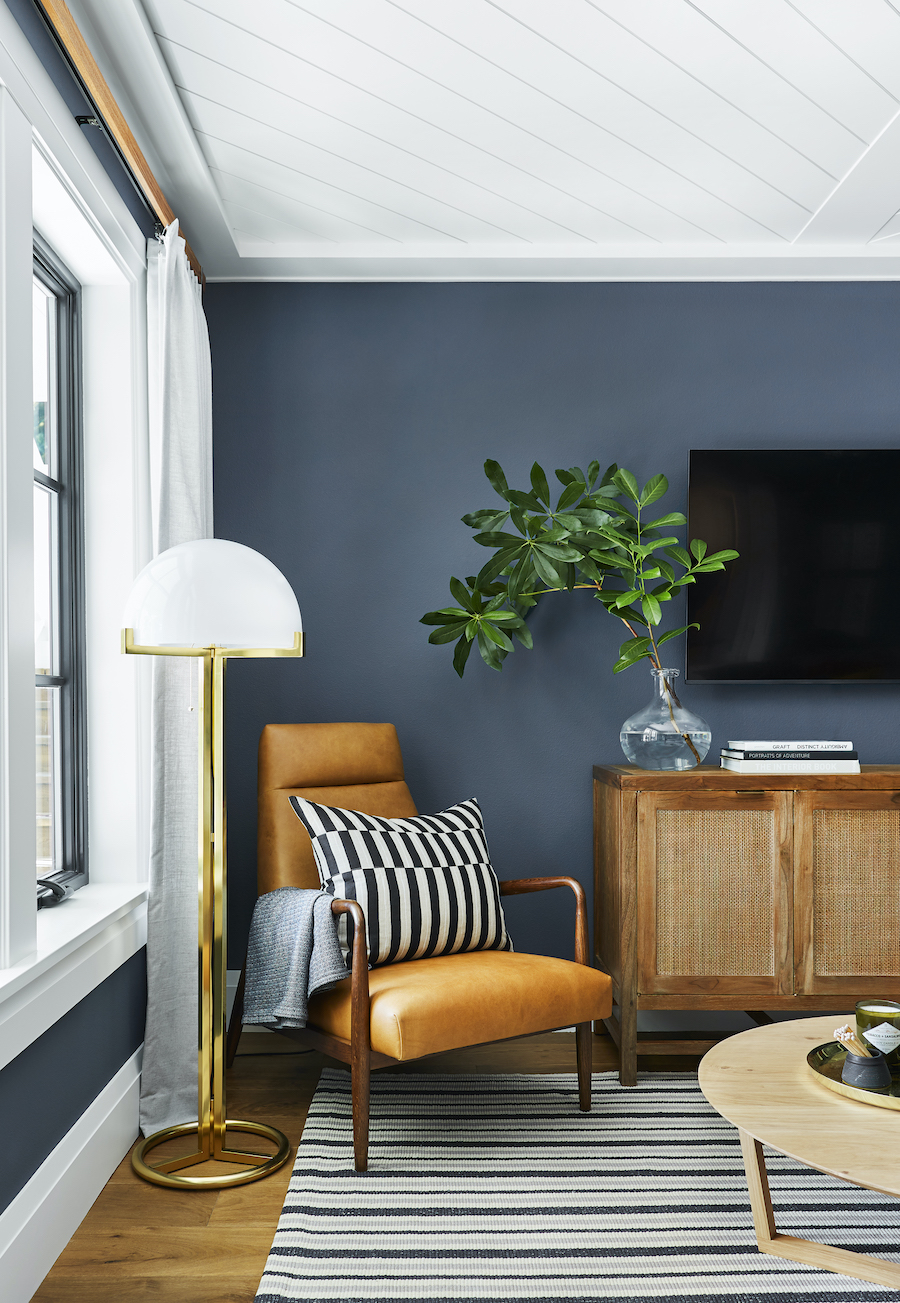 When my husband and I rented our first apartment after we got married, he persuaded me not to paint since we were only renting. At the time, I told him I was willing to wait with the understanding I would go wild whenever we bought our first place.

Six years later… we finally moved into our first home! Once we figured out a place for everything in our new home, I excitedly pulled up some swatches to show my husband my design brainchild: stencils and/or wallpaper. He paused before he responded slowly, “You know, I kind of like the gray that the previous owners painted. It’s really nice and—”

“Neutral. No. I do not do neutral, you know that,” I said. “You promised we could paint once we moved in, and I am here with paint colors and stencil samples, we are doing this.” We were both a little frustrated, and it’s no wonder why.

I am Indian American, and my husband is essentially Norwegian American. He is lily white, and I am much farther along the melanin spectrum. The reason I bring this up is because neutral is a pain point for me. Neutral washes away all of my heritage. Neutral plays up his culture and erases mine. Nothing about Indian culture is neutral, unless it’s in death. Death is the erasure of life and therefore only widows wear all white. I wore blood red and dusty rose to our wedding.

Neutral washes away all of my heritage. Neutral plays up his culture and erases mine.

This is a big thing I struggled with growing up. I hid in khakis and black hoodies for the entirety of high school–with one exception. I wore a red dress to every homecoming dance and without fail comments flew. I had such “courage” to wear a “risque” color. It didn’t make any sense to me because on the weekends, I was going to family friends’ houses where everything was a burst of color, from clothes to decor. By the time I attended college in New York City, I’d shied away from my Indian aesthetic and given in to an all-black wardrobe. I had eradicated everything bold and made myself as neutral as possible.

When I moved to Chicago for graduate school, because I was starting a new chapter, I thought I’d begin by painting my white apartment walls with some color. At first, I was hesitant to make any big changes, but I kept flipping back to the brighter colors in the paint swatches. I finally just decided to close my eyes and jump in. I painted my bedroom turquoise on every wall to feel like I was on a beach somewhere, and my living room was a subtle lemon yellow. My theory was that the color would help me through the long Chicago winters I’d been hearing about. Something cracked open inside of me with that small decision; the colors and patterns came flooding out. I wasn’t willing to go back.

Something cracked open inside of me with that small decision; the colors and patterns came flooding out. I wasn’t willing to go back.

When trying to make paint decisions as a couple, though, I didn’t want to bulldoze my husband. We had made decisions together regarding decor before (our wedding), and I was trying to remember how we made it work.

Because it was a wedding, it was important to honor both of our families traditions. We had a traditional Hindu ceremony, followed by a Christian ceremony. His mom baked our traditional American wedding cake following our Indian influenced meal. We paired Polka during our cocktail hour, with Bollywood hits for the dance floor. No one part felt too heavy when balanced by the other. 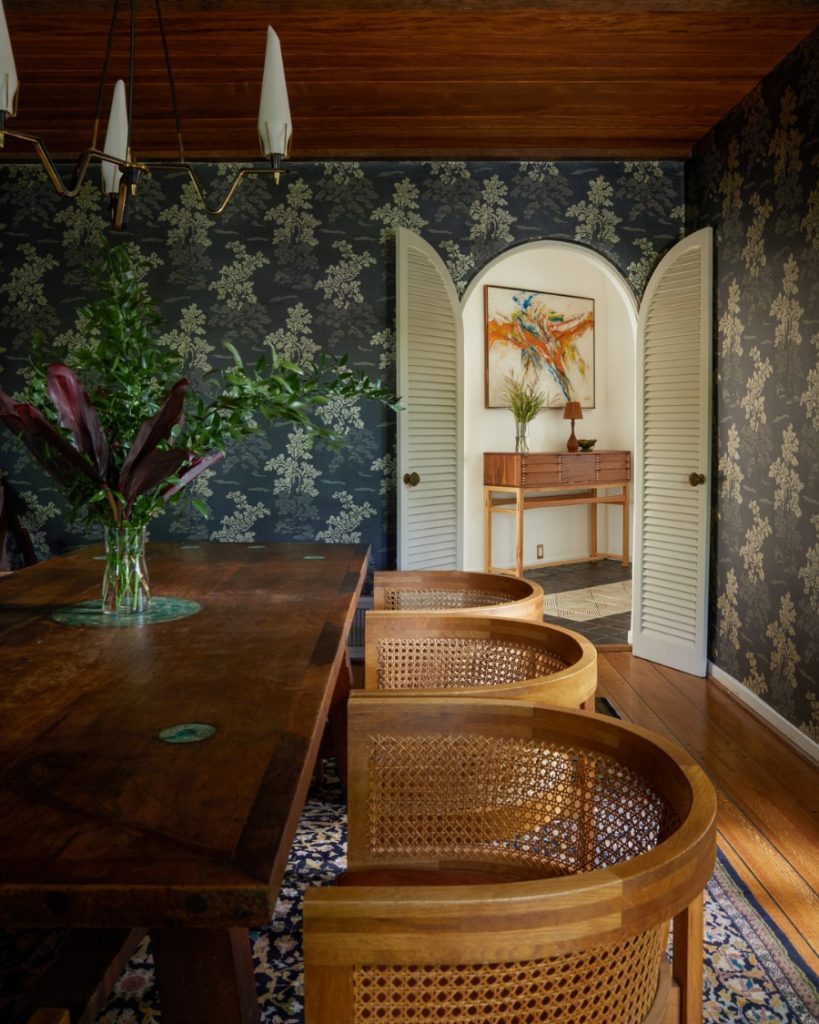 So, we decided to start the conversation again. I begrudgingly admitted that the gray actually looked nice in a lot of our spaces, so I offered to only paint a statement wall in each room instead of the whole condo. Since we were doing only one wall now, my husband was much more open to the idea of heavily-patterned stencils.

As we kept making decisions, we kept coming back to this framework. When I made decor decisions, I would ask him gently if there was something about the pattern he was struggling with. Once he articulated what bothered him, we would go back to the drawing board and use that as a parameter to find a pattern that we both loved. It worked so well, and we’re both so happy with the end results.

I begrudgingly admitted that the gray actually looked nice in a lot of our spaces so I offered to only paint a statement wall in each room instead of the whole condo.

I realized while we were engaged, my husband moved in with me, and we were ostensibly living in “my” apartment, but it was important to me for our first home to feel like our space. Once I embraced that mindset, decision making no longer felt like a struggle.

Through this process, I also realized it is possible to find something we can both be excited about. There is value in balance. And it’s not just useful in decorating; it can encompass all of the decisions we make as a family. It’s how we decided to become licensed for fostering, how we’ve navigated safety during the pandemic, and even how we chose our dog… Which leads me to our next home project: building some dog accessory storage this spring.