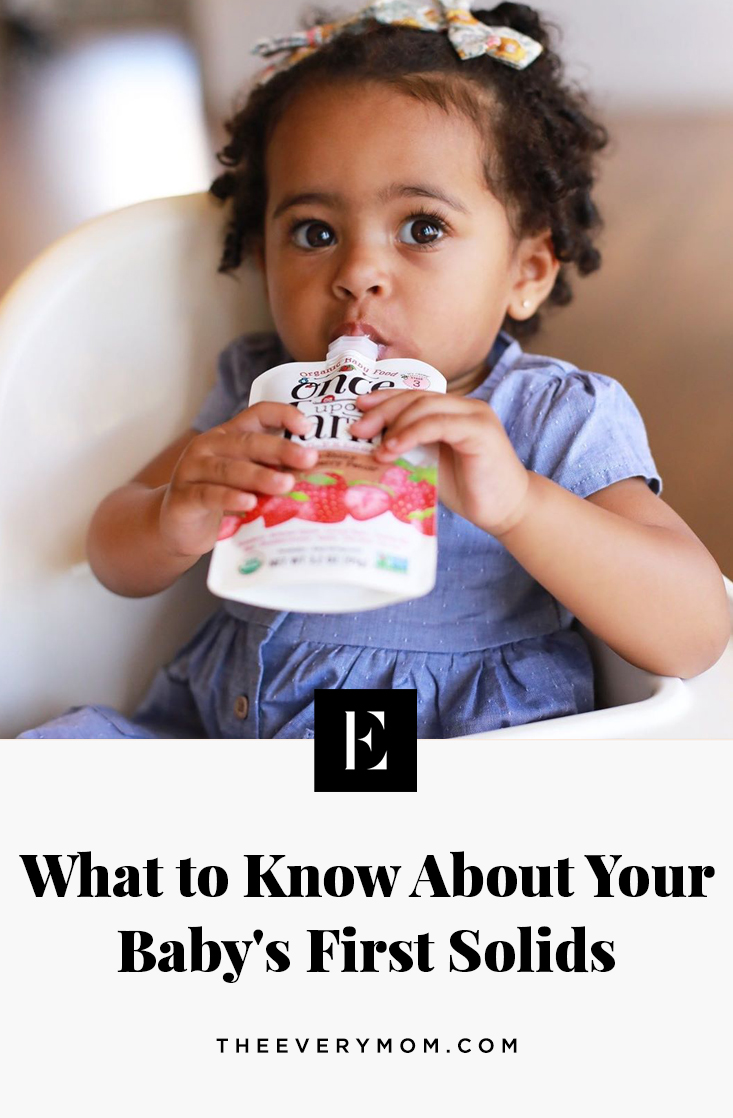 After months of feeding your baby an all-liquid diet, you’re ready to start solids.

Your baby meets all the signs of readiness and perhaps you’ve gotten the go-ahead from your pediatrician to introduce food. Like most stages in early motherhood, this milestone can feel both exciting and overwhelming. But here’s the big secret when it comes to introducing food: there really isn’t a wrong way to go about it.

Remember that generations ago, there were no parenting books on first foods and no baby food market worth $80+ million dollars. These days, we prefer to follow evidence-based recommendations and while there are a few basic rules and key nutrients to introduce early, feeding a baby is less about science and more about following your baby’s cues – basically, you have to channel your inner yogi and enjoy the journey. So, have your camera handy and let’s dive in.

There isn’t a specific time of day when babies are more likely to accept new foods. However, for the first few times when introducing food, it’s ideal to feed your baby when he or she is in a good mood, well-rested, and not sick.

Babies do best with new experiences when they’re happy, so if your baby has a bad cold on their six-month birthday or just doesn’t seem interested in eating, wait a few days (or a week), and try again. Ideally, you want to offer food when your baby is hungry, but not starving, so the best to offer is shortly after or in between their regular feeds. If they feed every three hours, an hour or hour-and-a-half after a feed is an optimal time.

Deciding what to feed your baby can be as confusing as how to feed your baby. The traditional approach of spoon-feeding blended, smooth purees allows you to control the texture and pace of the meal. In the baby food aisle, this is called Stage I or First Foods and often comes in single-ingredient, 2oz. serving jars. You can also make homemade purees with just about any food — like fruits, vegetables, and protein. These foods can me made by first cooking, then blending, and can be frozen in portioned-out servings for later use. 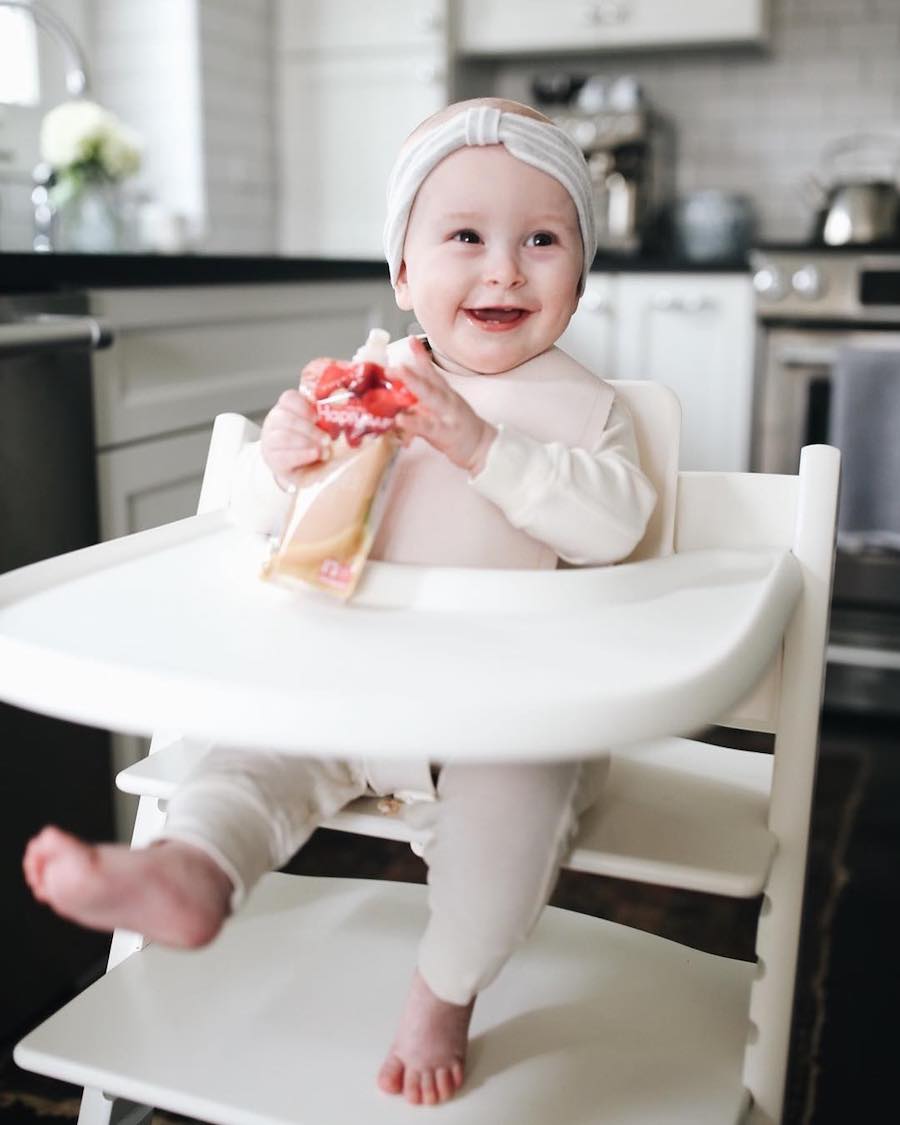 The baby-led weaning approach bypasses purees and spoon-feeding, and babies are given bite-sized pieces of food from the start. Essentially, your baby is eating the food that you’re eating. While your baby will likely not master self-feeding for many weeks or months, baby-led weaning does have a number of benefits. It allows babies to develop fine motor skills and learning self-regulation. And, while gagging is more likely to happen with baby-led-weaning, you should know it’s a safe and natural reflex for babies (their gag reflex is much closer to the front of their tongues than ours is). With either method, it’s always recommended that you know infant CPR.

How you choose to feed your baby is just that: a choice. There is no “right” way. Spoon-feeding your baby pureed foods is totally fine and so is offering finger foods. Find a feeding method that works best for you and your baby – and know you can introduce delicious flavor profiles through either approach and adjust as you go.

Whichever way you go, prepare for a mess – on you, your baby, the highchair, and probably the dog (though they do tend to happily help with clean-up duty).

You may be wondering what your baby’s first foods should be. The answer, of course, is that there isn’t one!

Traditionally, rice cereal or other single-grain cereals are offered as the first meal. While rice cereal is low in allergens, easily digestible, and typically iron-fortified, no medical evidence suggests it needs to be your baby’s first meal. On the contrary, giving your baby a variety of flavorful and naturally nutrient-rich foods from the start lays the groundwork for a varied diet later in life.

The most important recommendations when it comes to starting solids are to prioritize iron-containing foods early on and introduce single-ingredient foods one at a time to check for an allergy or intolerance. Babies are born with an iron reserve that gets used up around six months, which happens to coincide with the time solid foods are introduced. Good first iron-rich foods include iron-fortified infant cereals, meats, beans, and cooked spinach. 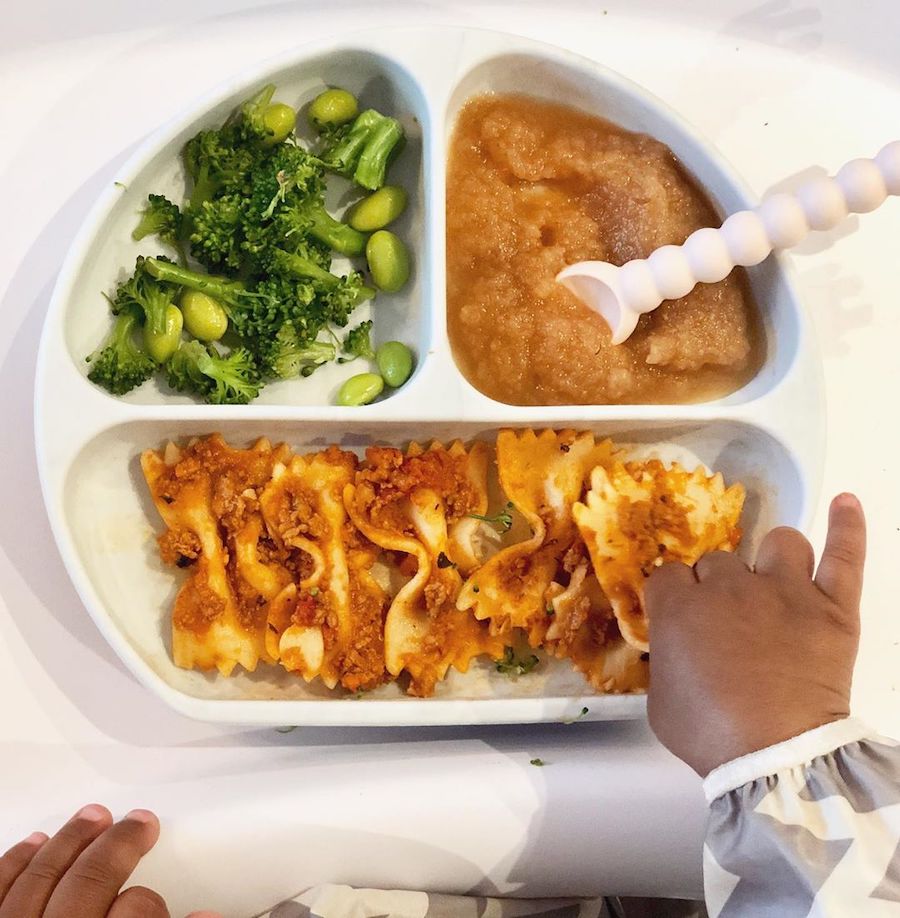 The American Academy of Pediatrics recommends introducing a new food every three days. This way, if your baby develops a reaction it’s easy to know which food is the culprit. However, this doesn’t mean your baby needs to eat only one food for three straight days, nor does doing so promise that they won’t develop an allergy.

Dr. Ari Brown MD FAAP put it like this: “It isn’t just eating bananas three times daily for three days. It’s adding one new ingredient to the existing diet.” So, if your baby has had sweet potato, avocado, and beans already, they’re welcome to continue to have those on the days you introduce apples for the first time.

For common allergen foods, which new guidelines recommend to introduce earlier than previously stated, Dr. Brown said, “You need to keep it in the diet and offer it regularly for the baby to have a reduced risk of being allergic to it.”

How Much and How Often

Start with one feeding a day and work up to three feedings, typically by 9-12 months. A good first-bites portion size can be half of a standard 2oz. jar of baby food, a few teaspoons of homemade puree, or 1-2 pieces of finger foods. However, you may find your baby takes one bite and meal time is over, which is totally normal.

Follow your baby’s cues, let your baby guide you and increase the portion sizes gradually as he or she shows interest and increases their intake. Baby getting fussy or turning away from the spoon? No need to force it. The last thing you want to do is to make mealtime unintentionally stressful for them.

In the beginning, food is complementary to breastmilk or formula, and continues to be secondary nutrition until your baby is eating large quantities of solid food typically around one year of age. Remember, your baby is trying to learn an entire new skill set and there’s no rush. Their little bodies and digestive systems need time to adjust, and their oral motor muscles need time to develop. Let it be fun, exploratory, and exciting. 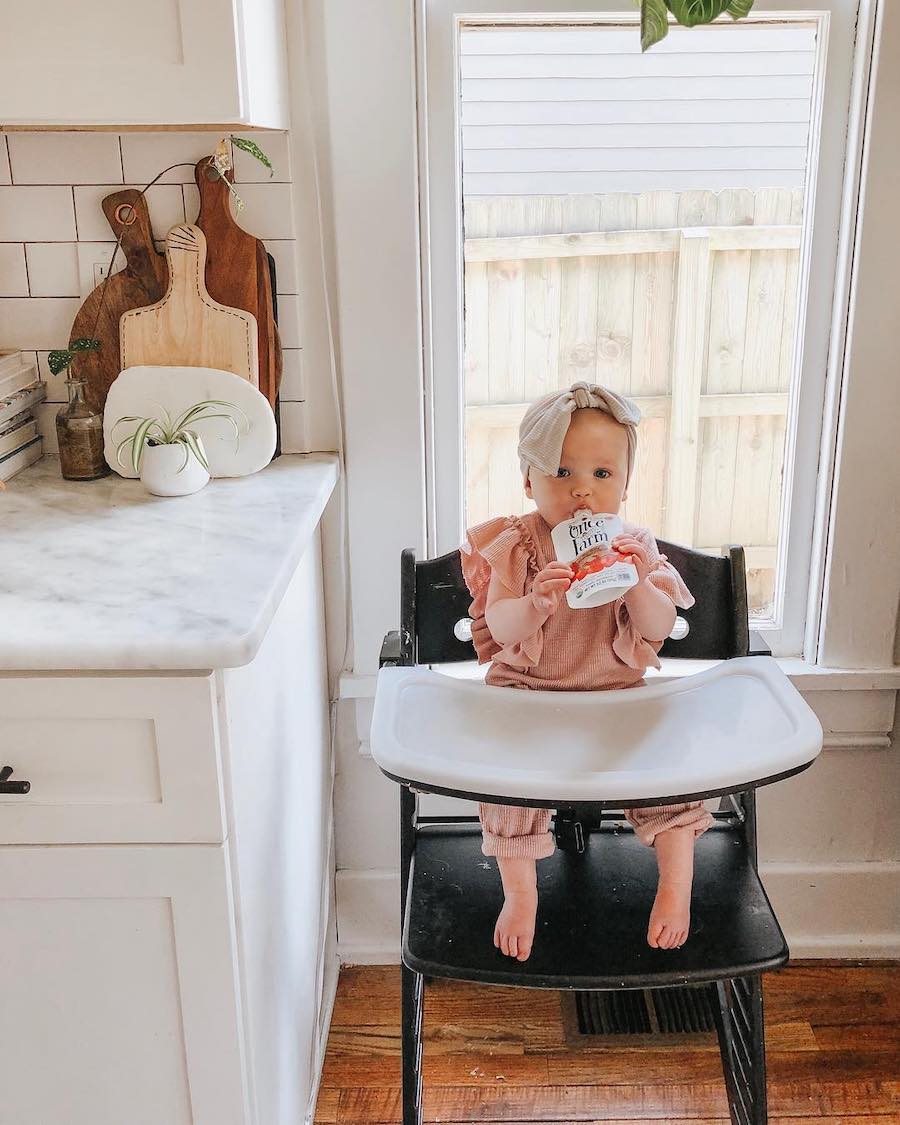 High-Fat Foods: The Way to Go

Fat is one of the brain’s main building blocks and babies’ brains are rapidly growing, especially during the first year. Alexandra Caspero MA, RD, co-founder of Plant-Based Juniors and Author of First Bites, said babies need 35-40 percent of their calories from fat. “Fat is not only calorically-dense, it also helps for absorption of some fat-soluble nutrients, helps the body build cell membranes, and allows for normal blood clotting and muscle movement,” she said. All the more reason to not shy away from this food group.

The type of fat you’re feeding your little one, however, is important. For unsaturated, plant-based options try canola and olive oil, avocado, and nut butters thinly spread on toast or stirred into oatmeal (large globs of nut butters can be a choking hazard). For nutrient-dense animal products, foods like dark meat poultry (thigh and leg), full-fat yogurt or cottage cheese, and scrambled eggs with the yolk make great choices.

You’ll want to limit trans fat, like the kind found in margarine and fried and processed foods.

The Few Foods to Avoid

There are a few foods babies shouldn’t eat until they’re older. Infants are at the highest risk for choking, so certain foods like whole grapes, whole cherry tomatoes, popcorn, nuts and thick portions of nut butters, hard candies, and raw carrots and apples should not be introduced until 3-5 years of age (the recommendation on the specific age varies – always check with your pediatrician if you are concerned). In general, anything circular that is similar to the width of a hot dog should be off limits.

Honey also shouldn’t be introduced until your baby turns one as it can cause botulism in infants – their digestive systems are not mature enough to kill the spores.

Other foods to consider limiting exposure in infancy include: juice (too much sugar), high-mercury fish, sugar alcohols (like xylitol and sorbitol), high fructose corn syrup, food dyes, and other food additives. Nicole Silber RD, a pediatric nutritionist in New York City, said to steer clear of salt before six months. “If it’s too salty for you, then don’t give it to baby,” she said. “And if you’re cooking food just for baby don’t add salt, but if you want them to share what you’re eating than light salt is totally fine.” 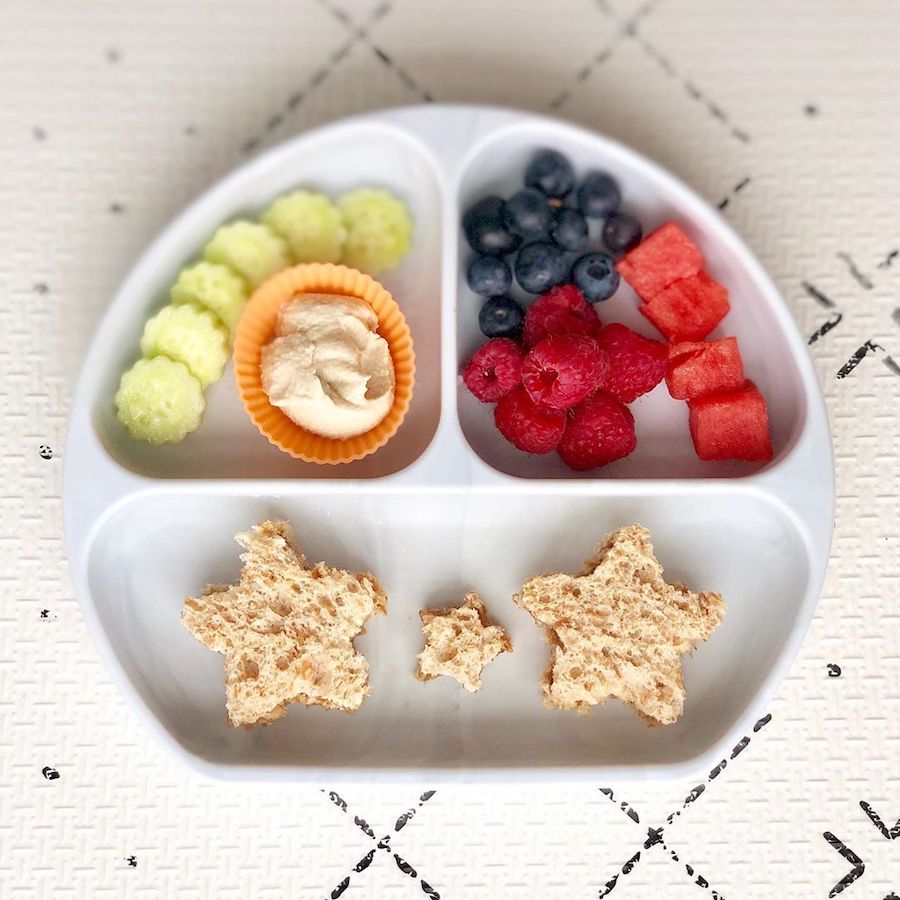 Introducing bland first foods to babies is not a recommendation based on medical research, and there is no evidence to suggest that babies can’t handle flavor.

Silber says, “Eating is a sensory experience for babies, so adding spices and herbs can help engage their senses both from a smell and taste perspective, draw them into the food, make them more interested, and eventually seek flavor in the future.” Some of her go-to combinations include peas and basil, leeks and white beans, and carrots with dill.

Whether preparing baby-friendly meals or mixing ground spices together with pre-packaged purees, adding flavor will help your baby be a more curious and adventurous eater.