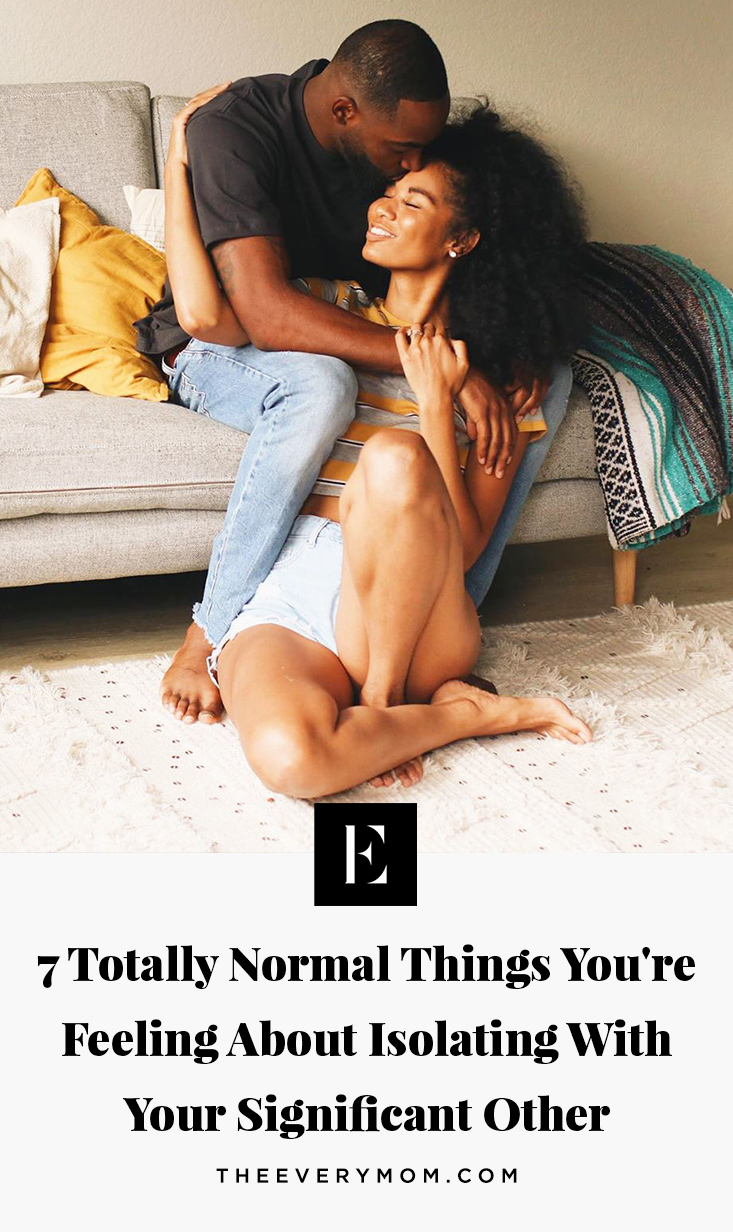 We get a lot of our knowledge about love and relationships from pop culture, right? But no rom-com takes place in a global pandemic (that I know of. If there is, let me know because I need some inspo). Noah and Allie from The Notebook had years of distance to keep the romance alive, and Bella and Edward from Twilight may have had to fight the Volturi, but they never had to fight over who gets the last few squares of toilet paper.

The truth is that a time like this will bring out the good, the bad, and the ugly in your relationship, but we have no idea what’s considered “normal” since we have no frame of reference when dealing with a time like this (our moms’ relationship advice when we were preteens definitely didn’t cover what to do if you’ve been wearing nothing but leggings for two months). Here are seven issues you’re likely experiencing that are totally normal (even in a happy, healthy relationship) while staying at home with your significant other.

1. Running out of things to say to each other

Having less meaningful conversations, or even talking less in general, is fairly normal in a long-term relationship because there are a lot of situations where you just know what your partner is going to say since you know each other so well. But especially when you’re cooped up at home all day every day, you don’t even have the normal go-to convo starters like “how was your day?” (because you know how their day was. You were there!).

To keep up the connection, schedule time every day to check in with each other. Ask questions like, “what are you most excited to do once this is all over?” or “but really, how are you feeling today?” Also, try asking high-mileage questions that might feel cheesy but will spark meaningful and deep connection. However, also remember that this time isn’t a honeymoon. It’s OK if you both are just trying to get through a scary or stressful time, as long as you feel like you’re trying to get through it together.

We get it: you love your significant other and you two are ~perfect for each other.~ However, even the most soulmate-y soulmates need some alone time to keep up their individual lives or, you know, keep their sanity. Remember that only puppies and babies require care 24/7, so it’s natural to long for alone time. Give your significant other some space by going on solo walks or setting up workspaces in different rooms and designating “work hours” when you can’t disturb the other. Don’t feel bad about asking for alone time, and don’t doubt your partner’s love for you if they ask for it. 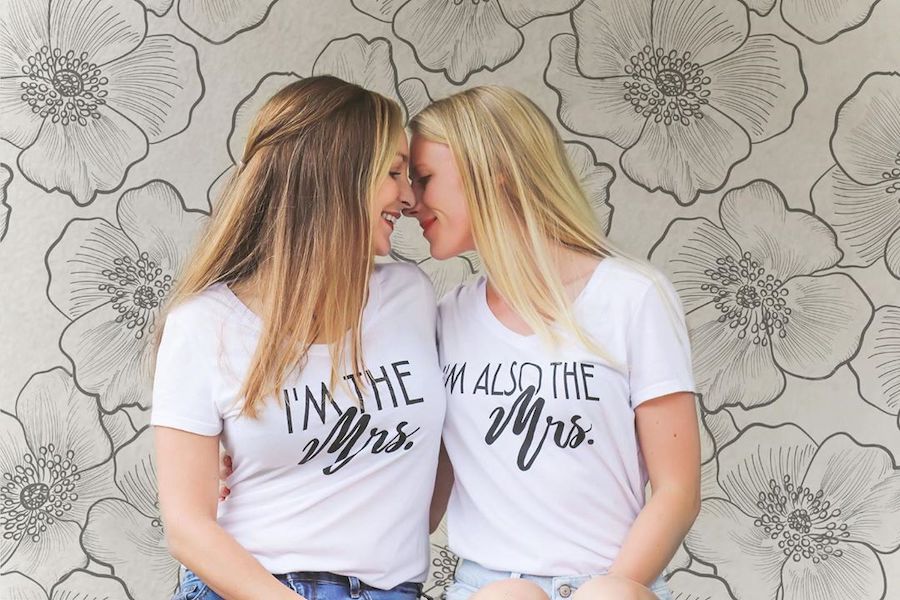 Aren’t you so over the jokes that there’s going to be a major baby boom in nine months from now? The people making those jokes have probably not been in a relationship for multiple years and are probably not exhausted parents either. Sure, you have extra time in theory, but you’re also eating more comfort food, wearing only sweatpants, showering less often, and parenting 24/7 with kids also spending so much time at home. Plus, you’re both probably anxious, stressed, or both. It’s not exactly the recipe for romance you might’ve had in mind when you pictured being stuck inside with your significant other with nothing else to do.

If you’re having less sex, don’t worry that the “spark” isn’t there anymore; you’re actually statistically in the norm. Focus on the connection that is growing (like the chance to emotionally depend on each other during a scary time), instead of the connection that just isn’t happening right now.

The idea that in healthy relationships, every disagreement must be fully talked through until you reach a tangible resolution is just a myth. The happiest couples know that some conflict is inevitable, and you’re not going to see eye-to-eye on every minor issue. Sometimes you have to forgive, even when your partner doesn’t ask for forgiveness, and some battles are not worth fighting.

Remember that the true goal of a life-long relationship is to have a partnership that will best help you live your happiest life (that’s it!). Be the half of that partnership for your spouse by letting things go that don’t hold that much importance. If you know you’ll get through everything (meaning you’re in it for the long haul), choose to get over the little things instead of proving you’re right.

5. Getting seriously annoyed at a specific habit

Storytime: my boyfriend has a habit of leaving the shaving cream out on the counter instead of putting it away in a drawer, and don’t even get me started about how I somehow find dish towels all over the apartment (in what circumstance would you need dish towels outside of the kitchen!?). Especially for couples who are spending way more time together than they normally would (AKA all of us), there are likely certain habits that you’re learning about or are bothering you more than usual, and they are Getting. On. Your. Nerves.

Here’s what separates a healthy relationship from a plain unhappy one: no matter how annoying the little habits become, I know my boyfriend is much more patient about all the annoying habits that I have. Plus, if he wasn’t with me, I would miss everything about him, including the shaving cream on the counter and the dish towels all over the apartment. Reminding myself of exactly these things has been crucial for resisting the urge to start a blowout fight whenever I see the damn shaving cream bottle, and remembering that no matter what, I’d choose him all over again (annoying habits and all). 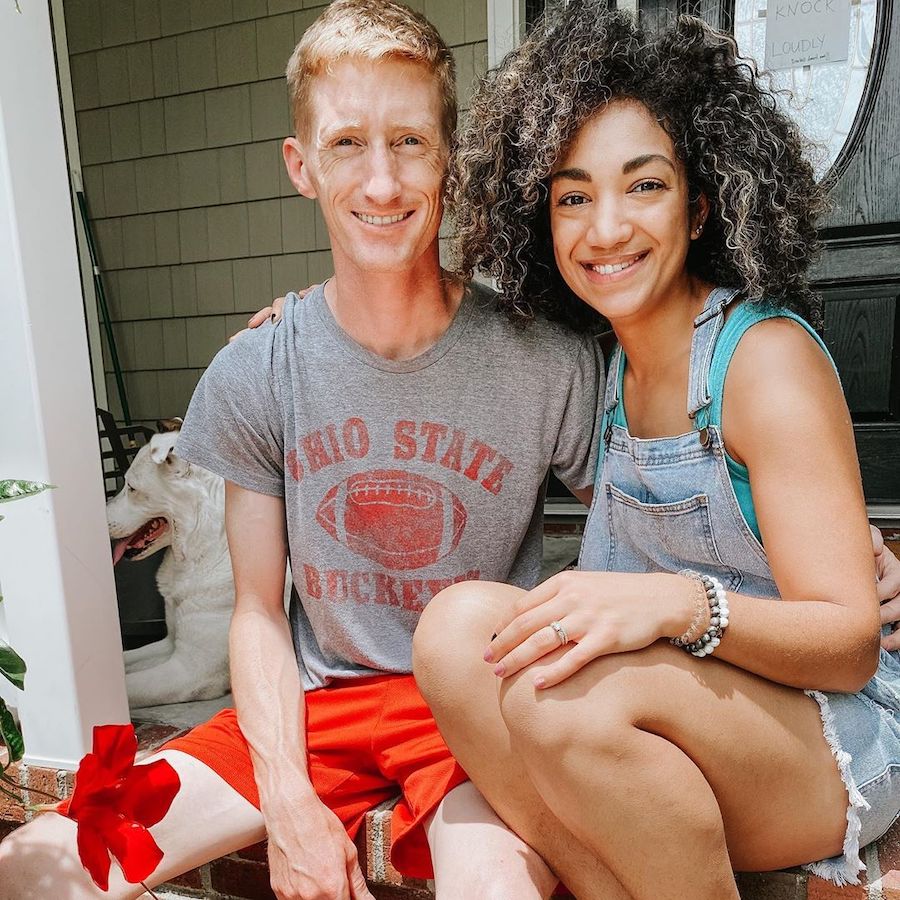 Let’s be honest: between the fact that you have no one else to take out your stress on and those annoying habits previously mentioned, you’re both probably more on edge than normal. If you’re fighting more often, know that it’s only natural. Just make sure you’re fighting healthy (AKA no labeling, make requests instead of complaints, and take turns talking). If you’re in a healthy relationship, you’ll still be happy way more often than you’re mad, so be patient with your relationship when conflict does come up, and patient with your partner if they’re extra on-edge these days (because aren’t we all!?).

It’s hard enough keeping the romance alive in a long-term relationship when you can snag a babysitter every once in a while for a dinner date or have an adequate amount of alone time away from the kids. It’s a whole other beast to keep the romance alive when frozen pizzas are the norm and total normalcy is still a distant memory. You’re probably feeling bored and stagnant in all areas of your life, so it’s easy to feel the stagnancy creep into your love life too. The biggest challenge is not to blame your partner for feeling “blah” or expect them to make you feel better. Only you can control how you feel, so take up a new hobby, play some happy music, or do whatever you can to make yourself feel better.

In terms of your relationship, the secret is doing what you can to make your partner feel special. For example, bring home flowers from your grocery store trip, plan a themed date night, or put on the nice perfume that reminds your significant other of when you first started dating. You might be having less sex and more fights, but in the end, you’re with the person you’ve chosen to go through the ups and downs with. They’ve kept you laughing or calm during the toughest of times, so never stop feeling grateful for the person you get to go through the toughest of times with.

This article was originally published on The Everygirl on May 8, 2020.

Read More: 10 Ways to Spice Things Up in the Bedroom After the Kids Go to Sleep